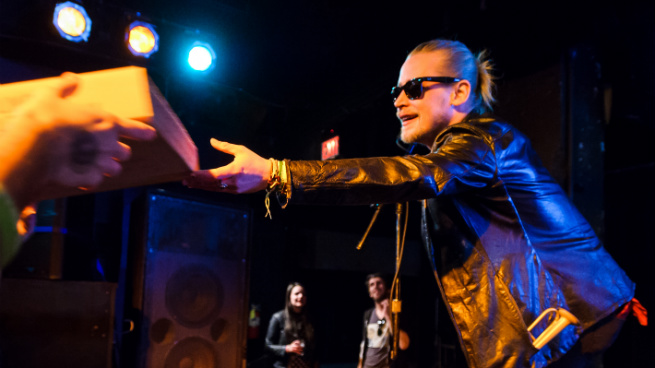 Beer is pizza’s best friend, but the pair recently engaged in a decidedly unfriendly debate at the Nottingham stop of the Dot to Dot music festival. The Pizza Underground, Macaulay Culkin’s pizza-themed Velvet Underground parody cover band (yes, I think it does require this many adjectives, and more) were booed offstage and pelted with pints by the crowd 15 minutes into their U.K. concert. Before fleeing with his bandmates, Culkin asked the crowd, “Why are you throwing those? I’d rather drink them!”

The band had arrived bearing free pizzas, cheerful and optimistic enough about their reception for Culkin to greet the crowd with “Hello, Cleveland” before launching into a kazoo solo. The Nottingham Post sniffed that Culkin was a “Hollywood reject,” and that his band was a “stoopid” and “terrible idea.” How dare silliness interrupt a music festival like a sad, uninvited anchovy amid the dignified pepperonis of bands like the Sleaford Mods (offering “acerbic, profane social commentary and punk-poetry,” and not playing on empty pizza boxes)? Maybe the charm of the Pizza Underground is a domestic product that wilts when exported. At least Har Mar Superstar gets it:

Sucks that the Nottingham crowd were dicks to my friends @cheesedayz. Also a shame that media outlets focus on 1 bad vs 100 fun shows.

Culkin has been working in Hollywood for 29 of his 33 years, and has weathered enough scandals to have a deep understanding of the publicity system. L.A. Weekly‘s recent treatise on Tom Cruise’s couch jump might provide some context for why Culkin has decided to embark on a career as the Lou Reed of crispy crust: Creating a spectacle to offer gawkers is one way of wresting control of the gaze that would otherwise wander into your personal affairs. After the Internet rewrote Cruise’s narrative based on that infamous sectional violation (which arguably defined the rest of his career), Cruise never offered a notable sideshow that could have pried at least a few headlines away from that conversation.

This is not the tack taken by thoroughly modern Macaulay, who belongs to a generation that gets what goes viral. Last year, Ryan Gosling was photographed wearing a T-shirt featuring Culkin’s face (circa Home Alone), and so earlier this month Culkin tweeted — via the Pizza Underground account — a photo of himself in a shirt with Gosling’s paparazzi shot on it. GIFers got to GIFin’, and the rest is recent history. He’s working with the media instead of against it, directing its attention away from what he’d prefer to keep private but offering up an alternative: something strange, buzzy, and separate from himself. Does anyone really want to kick back and enjoy the mellow tunes of the Pizza Underground? Probably not. It’s what you reach for when you can’t find Philosophy of the World, but that’s not the point.

Culkin retreated from the spotlight at 14, but like many child stars, he never stopped receiving attention. We clocked his 2004 arrest for pot possession and kept track of his romantic relationships, even during periods when his onscreen career had been placed on hold. We have all the bandwidth in the world, and long memories to match. So boo all you want and toss your bottles of Kipling high if it makes you feel better. The pizza man delivers, but he’s really serving himself.

“Right now, we’re working with three leads. It takes place in California. Not Los Angeles, but some of the lesser known venues of California and we’re going to try to capture a certain psychosphere ambience of the place, much like we did with season one. The characters are all new, but I am deeply in love with all of them.” #TrueDetectiveSeason2 #ThreeLeads #NewHashtagGames

'Ill Communication' at 20: An Everything Guide to the Beastie Boys Masterpiece