Macaulay Culkin’s Band, the Pizza Underground, Releases Its First Video, Is Apparently Very Much for Real 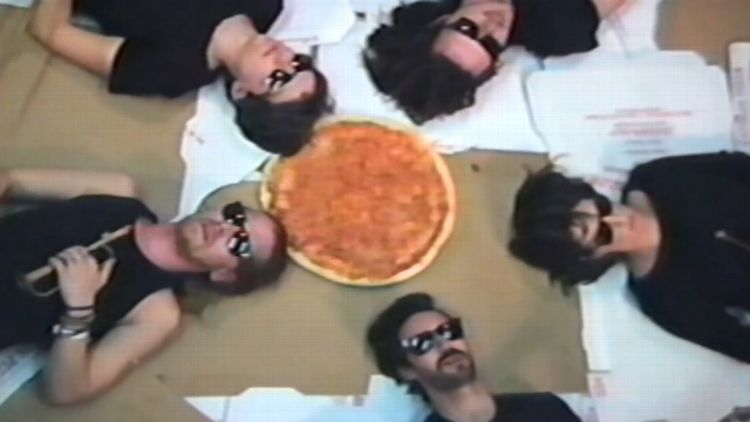 You can’t do something big, like create a pizza-themed Velvet Underground cover band, without taking a few pies to the face. There was the misunderstanding that percussionist/kazoo soloist Macaulay Culkin, with whom you were recently reunited during the holiday Home Alone marathons, and his bandmates (Matt Colbourn, Phoebe Kreutz, Deenah Vollmer, and Austin Kilham) had started their musical project as a weird mourning response after Lou Reed’s death — in fact, the Pizza Underground has been rocking out for almost two years, though they just gained a boost in press momentum last month. And because the pizza music market is a competitive one, the Pizza Underground caught some flak from the venerable Personal & the Pizzas, another NYC-based pizza band who responded to the newcomers with some choice words: “First we’re gonna kill em. Then! we’re gonna sue ’em. Don’t mess with the fuckin’ Pizzas, prick. I can reed motherfucker. I can reed!” The stylings of this rivalry are very pie style, Jack.

On Monday, the Pizza Underground released its first music video, a compilation of “All the Pizza Parties” (a take on the Velvet Underground’s “All Tomorrow’s Parties”), “Pizza Gal” (“Femme Fatale”), and “Take a Bite of the Wild Slice” (“Walk on the Wild Side”). You’ll have to wait for “I’m Beginning to Eat the Slice” and “Papa John Says.” It is probably just what you expect it to be — pizza wallpaper, dangling slices, Velvet Underground–style black sunglasses and outfits, and a single traditional cheese masking Culkin’s face:

The video was preceded by a YouTube of Culkin eating a piece of pizza for five minutes that went viral in mid-December, as well as the band’s Warhol-worshiping Tumblr. In Noisey’s behind-the-scenes coverage piece (which also includes the unappetizing line “inside [the studio] it does actually smell like ass”), the video’s director, Adrian Arredondo, remarked that Culkin “was a little maybe louder than the others on set, but also maybe he has the most to lose from all of this, because of his history. He said this himself, he’s already a joke within a joke of himself. He’s very self-aware, he knows what he’s doing. He wasn’t as weird as I thought he was going to be, but he was unusual.” If a former child star is going to take a career risk, it’s probably a better idea to wear a pizza mask than to hire a skywriter (despite pizza being less “complex” than Shia LaBeouf’s plagiarism and cloud art).

The Pizza Underground tour kicks off on January 24 in Brooklyn (check here to see if you’re within their delivery area). Suggested pairings for your listening party: legal marijuana, reenacting the lost pages of Home Alone‘s fictional gangster movie Angels With Filthy Souls, multitasking your slices, and, of course, a Warhol brew. Enjoy it while it’s hot; in keeping with the spirit of the project, it’ll probably all be over in 15 minutes.

The FBI vs. the ICP: Revenge of the Juggalos

Ray Allen's Talking Up the Possibility of He Got Game 2