The ‘Survivor: Cagayan’ Finale: It’s Not How You Play the Game, but Whether You Win or Lose 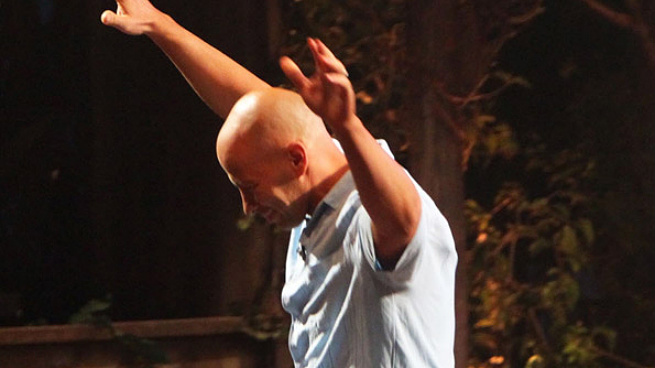 Survivor: Cagayan — Brawn vs. Brains vs. Beauty was like a morality play that taught you all of the wrong lessons. When Jeff Probst, live in the studio, gathered a group of Survivor-fan children around him to encourage them to compete as soon as they’d grown abdominal muscles, he was doing so during a finale that would prove that integrity and honesty is nothing against manipulation and well-executed lies. This was also the season that began with Team Beauty repeatedly crushing Team Brains, the season that featured a hissy-fit-prone and sometimes vicious underdog, and the season that included one of fashion’s most regrettable maxi-dress trends: the dress with a separate skirt for breasts (hey, Morgan, thanks for lending Jefra one of your outfits for the final jury). It was perfectly fitting when Tony Vlachos, the cop who had sworn his loyalty on his badge, his wife, his newborn daughter, and finally his father’s grave, won a million dollars for duping all of his competitors. The only truth in Survivor is that every time someone makes you a promise, their fingers are crossed behind their backs, even if their palms are held out for you to see.

It was dirty, but it was also one of the best seasons of all time. Cagayan showcased one of the most driven players in recent memory, Tony, who couldn’t always keep a lid on his emotions (for instance, when he spoke llama) but was so hungry for the $1 million that he literally auctioned off the souls of his entire family, both living and dead. But then there was also J’Tia, the fourth person voted off, who enthusiastically and illogically broke every rule in the book despite being supposedly smart enough to be assigned to the brain tribe. A nuclear engineer in her civilian life, she seemed to have wandered onto Survivor island after taking a wrong turn on the way to the Big Brother auditions.

Rice was burned, feelings were hurt, and the insults got increasingly nasty right up to the final jury. Tony deserved all the vitriol he got, especially from Trish, his closest ally, who came at Tony during the last tribal council like a skeletal hornet attacking a honey-glazed, Bavarian creme–filled Jersey cop. When Tony’s paranoia or aggressive (and sometimes overtly controlling) game play freaked people out, Trish had helped smooth out the cracks, but he blindsided her as soon as he realized she might have fewer enemies on the jury than he did. Tony used every minute of his 39 days to claw himself closer to the finals, hunting down idols until he found them, including the Tyler Perry Presents an Extra-Special Magical Power Idol that could be played after the votes were read (up to the final five). Tony may not have been the smoothest player — had he been more subtle or shown more finesse, he might have had a more pleasant final tribal experience — but in one of his more inspired moments (another inspired moment being building a spy shack, which also provided one of the best TV hashtag opportunities in recent memory with #spyshack), he bluffed that he could use his special idol for one extra vote. The other castaways were suspicious of his claims, but Tony’s own paranoia taught him that all it takes to disrupt tribal harmony is one small and poisonous drop of doubt. He set himself up as a punching bag for the jury, but he also worked so hard for the win that nobody — not even his adversaries — could hold it against him.

But before Tony could claw his way to the top, there was the final four. When you’ve reached the final four survivors, you know them well, and what you don’t know your imagination takes care of. Kass McQuillen was a sort of Jill Abramson/Peggy Olson type, resigned to the fact that her game style (and self-given nickname, “Chaos Kass”) wouldn’t have earned her so much hatred had she been a man. Woo Hwang was the third member of Bill & Ted’s Wyld Stallyns, the guy who presented the five tenets of taekwondo as a fancier version of “be excellent to each other.” Spencer Bledsoe was the underdog who became a fan favorite despite his tendency for petulant snark (no sympathy for Spencer here, especially after he called Kass — who beat him — a “brain-dead weasel”). And, of course, Tony, who often referred to himself in the third person and found himself in the precarious position of having to reinvent his promises because he’d broken so many.

Kass and Spencer were originally on the brains tribe, and Woo and Tony hailed from brawn, though Tony failed to win any immunity challenges. Spencer competed well in challenges and wasn’t as offensive to the jury as Kass and Tony, but he’d played much more strategically than Woo, so it was no surprise when his efforts to convince Tony to keep him around — by predicting a final two instead of a final three, which wound up being correct — failed and his torch was snuffed. Even if Kass hadn’t won immunity in a dramatic challenge comeback, she would have had a good shot at proceeding to the top three because good gravy did people hate her guts! I actually admired Kass’s style, and thought she had a good chance of redeeming herself were she to present in front of the jury. At some point, she learned to use the ill will she’d drummed up to her advantage, making herself seem like the perfect person to sit next to before the final vote. Sadly, she was the next to go, following a half-second immunity challenge loss (the closest in Survivor history, according to Probst) to Woo, whom Kass compared to Nicaragua winner Jud Birza, otherwise known as “Fabio.”

Woo had one shot at winning the million, and that was to sit Kass next to him as his final obstacle. While it wouldn’t have been the most thrilling finale, it would have given him the best chance to prove he had actually come to play, not just to do flips and break limbs falling out of trees. What he did instead was good-hearted, honest, and, in Kass’s words, stupid. He had immunity and the deciding vote, and he chose Tony.

Games are escapist, and Survivor is no exception: What makes someone a good person in life is often what makes them a bad strategist when they find themselves both chess master and pawn. The person most deserving of the grand prize is not the one who needs it the most, but the one who wants it the most, and who will stop at nothing to get it. Even making friends is a power play, because you must decide who will make you look your best in the end. In-game respect is earned not by what you give, but what you take away: threats, idols, immunity, rewards. You vampire the life and charisma out of your dwindling group until you are the Nosferatu of Probst island, your vitality levels full from draining the blood from your enemies. Woo confused respect with affinity, and as he and Tony uncorked the champagne for their mimosas he couldn’t help but chant, “One love, one love, hey man, one love.” How wrong he was: This isn’t love, it’s war.

The jury still tried to give Woo the benefit of the doubt. In his opening statement, Woo recited the five tenets of taekwondo — respect, integrity, perseverance, self-control, and indomitable spirit — and mentioned his mother’s heart transplant. He tried to appear good, forgetting that being good not only doesn’t matter in this game, it can be a deficit. One by one, the jury attacked Tony for his pinkie swears with Jeremiah (who, earlier in the season, confessed he was a model as though he was admitting to being in the CIA), expressing doubt that the cop even had a wife and baby with souls to swear on. Tony responded to each of his interrogators by flattering them, implying that they had posed a threat to him and that he had no choice but to make sure their torches were extinguished. In a way, he repurposed Woo’s platform for his own benefit: He respected each eliminated jury member enough to admit being threatened by them, he had the integrity to own up to wronging Trish, he had persevered to achieve his goal, he had given up rice and water for others because he had the spirit to suffer to get to the finals, and … well, self-control, not so much. But four out of five isn’t bad. He didn’t have to express these points overtly, because he said enough to prove that he understood the rules better than Woo did.

When Spencer asked Woo to defend his passivity, Woo explained that he wanted to go up against his fiercest competitor, which just opened up the floor for superfan Spencer to explain that a vote for Tony would be “a vote for the only guy sitting there who played the game, and played it in a way that honors it.” By the time Probst invited us into the jury’s green room before the vote was read at the live show, it was clear that Woo had sealed his fate in the Philippines, and everyone participating already knew who the winner was. Back on the final day on the island, Tony looked like a broken man, but when he rejoined the cast in the studio for the final verdict, he was puffed up not just with muscle, but with confidence.

Tony may be a good, honest cop and a stand-up guy at home, but Survivor doesn’t hand its money out for charitable causes. It rewards people who shed their real personas in favor of the spirit of the game, and Tony embodied that spirit with some truly next-level shit (he wants to spend his winnings on a pink chandelier for his daughter’s nursery, possibly because he has been driven mad by this whole experience). Tony and Kass played by these rules, but Tony didn’t waste his time causing a stir — he was busy sniffing out any tool that could assist him in his win, and his work paid off. As for Woo? Well, since he never really played the game, at least he can return to the world with his reputation intact. Maybe he can write the whole thing off as a dream and join Bill and Ted in a truly excellent phone booth. He probably needs a vacation.

Cannes Diary, Day 8: The Oldster, the Hipster, and the Return of the Director of ‘The Artist’