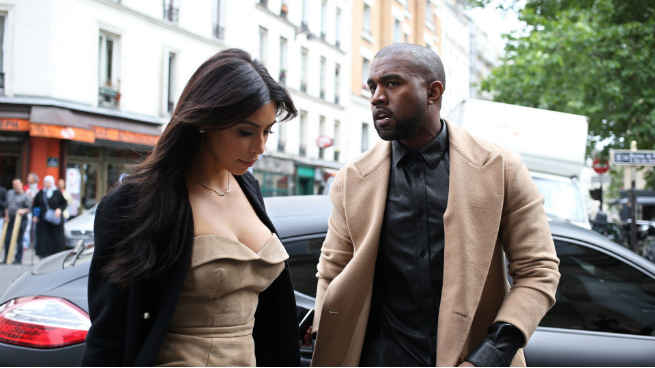 Celebrity Guest List of the Week: The KimYe Wedding

Kim Kardashian and Kanye West are honoring Memorial Day, the official kickoff of wedding season, by getting married in Florence this weekend. However, the pre-wedding celebration is in Paris, and their posse has already descended upon the city of light. Notable celebrants include Jay Z, and possibly Beyoncé. They’ve been photographed — or rather, they’ve photographed themselves — in Paris, but Us Weekly has only confirmed that Jay will be attending the ceremony. If you believe Blind Gossip, they are both going, and it’s only because Kanye has given Jay complete control of his business affairs. Rachel Roy, rumored to be party to the great elevator fight of 2014, will also be in attendance. Meanwhile, the Jenner-Kardashian clan has been gallivanting all around the city. Kris and Bruce staged a visit to the Louvre. Hopefully the cameramen and boom operator were able to steal a moment to enjoy the Mona Lisa. In the photos, Bruce seems unperturbed by the fact that his son Brody is not in attendance. The king of The Hills did not receive a plus-one, so he will not go. We’ve all been there. The last time Kim got married, Brody used his plus-one on Avril Lavigne, whom he was dating at the time. That didn’t last, but, of course, neither did Kim’s marriage. Either she is stingy with the guest list, or this will make a good subplot when the wedding episode of Keeping Up With the Kardashians airs.

Breakup of the Week: Rory McIlroy and Caroline Wozniacki

Golfer Rory McIlroy and tennis player Caroline Wozniacki are no longer betrothed. McIlory released a statement taking responsibility, explaining he “wasn’t ready for all that marriage entails.” Fair enough, but couldn’t he have realized this before they sent out invitations? These two supposedly had some issues in 2013, when both of their careers suffered. The silver lining of this breakup is that we get to witness the British press at its finest. Here are a few quotes, presented without commentary.

Leo is out and about in Cannes right now. The Daily Mail has a thorough photo spread of him at a nightclub looking cozy with Katie Cleary, who is not his girlfriend. Cleary was on America’s Next Top Model in 2003. Leo has been dating model (obviously) Toni Garrn for the last year, so hopefully she does not read the online version of the Daily Mail. Perhaps even more upsetting than Leo’s suspicious coziness with this other lady is that he is partying at the same club that Justin Bieber and Paris Hilton patronized the night before. Leo needs to have higher standards. There must be somewhere else he can go.

Speaking of … Celebrity of the Week: Justin Bieber

While his business in Cannes is not clear, Bieber need not wear a shirt to do it. He opted to go topless at the aforementioned club. Perhaps his muscles motivated Hilton to give him a lap dance. It definitely was not his new, disgusting “mustache.”

Every once in awhile, real-life events disrupt the better, fictional TV world that I choose to believe in. Rachel Bilson has done just that by getting pregnant. At the end of The O.C.. Seth Cohen and Summer Roberts got married in a lovely Jewish ceremony and, presumably, lived happily ever after. The fantasy was easily projected onto real life since Adam Brody and Rachel Bilson actually dated. They broke up sometime around the mess that was Season 3, but if Seth and Summer got back together, didn’t that mean there was hope for Adam and Rachel? Brody began to chip away at the fantasy by marrying Leighton Meester last year, but since she looks so similar, it was easy to ignore. Unfortunately, Bilson’s future child with Hayden Christensen has permanently destroyed the Seth and Summer dream.

Too Dark to Joke About: Michael Jace Arrested After Police Say He Shot His Wife

Actor Michael Jace called 911 after police say he shot his wife to death. Jace is best known for his role on The Shield. Police found a handgun in his house. He had no prior arrests, but papers from a previous divorce suggest that he made violent threats at his ex-wife. The most tragic part may be that, according to TMZ, his two kids witnessed the incident.

The 'Survivor: Cagayan' Finale: It's Not How You Play the Game, but Whether You Win or Lose