George Clooney’s Balls, Jonah Hill’s Ego, and How to Walk the Sincerity Tightrope 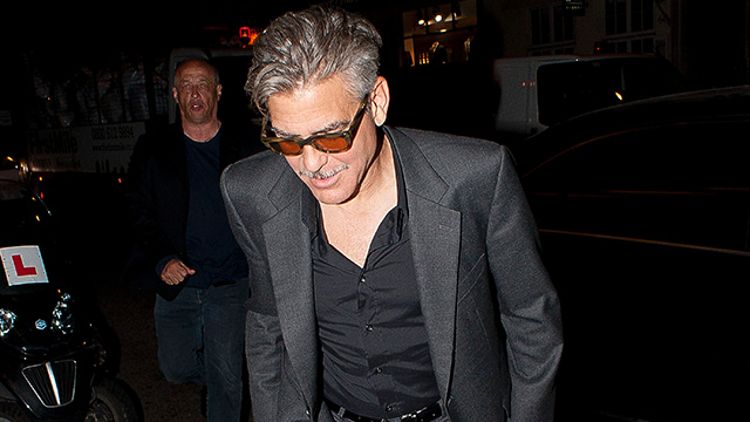 Yesterday’s most notable click-bait, the double bacon cheeseburger on the hook, was a story about George Clooney’s balls. In 2008, Clooney joked to Esquire that he had gotten “the new thing in Hollywood — ball ironing” in response to a previous sarcastic remark he’d made about getting his eyes done, which was garbled in translation and wound up making the tabloid rounds in Italy as fact. One of the weird parts of this story is that he repeated the joke to Italy’s Max magazine this January, again insisting that “many people in Hollywood have done it”; the other weird part, of course, is the procedure itself actually exists, and employs lasers to fix discolorations, zap skin tags, and provide “overall tightening to the external skin. You know where …” with a cost of $575. It’s a shame Nurse Jamie, talking head and ball-smoothing guru, and the folks at Beauty Park don’t throw in tattoos of mean faces and beards à la Dave Chappelle for an extra fee, because if you’re the kind of blingy eccentric (and, apparently there are many of you, storming the laser centers in droves like Randy Marsh with a wheelbarrow) who’d undergo a painful voluntary procedure on your family jewels, you might as well go big or go home.

It’s perhaps not a coincidence that Clooney first mentioned this procedure in an interview during which Esquire forced him to confront his digital footprint, an image often unfaithfully re-created by his fans and critics. Before the interview, Clooney had never read his own Wikipedia entry or delved deep into the dark caves of his own rumored sexual preferences and reviews of his movies on Amazon (or seen “2 Girls 1 Cup,” but that’s tangential to the point). He wasn’t totally immune to a lot of his own biographical trivia, like when Rupert Everett laid into him about the Ocean’s Eleven franchise (Clooney: “Dude, weren’t you in Dunston Checks In?”), but when confronted with comments about his dating history, like “He dates beautiful women and nothing happens and they disappear into oblivion,” he remains unflappable (his response: He ate them). Is Clooney a serious actor as well as a serious celebrity? There is no question: Over 17 years he’s amassed enough awards and nominations, including two Oscars, to keep you scrolling for a while, and he’s a United Nations Messenger of Peace. But is he a serious person? That was proven false long ago. Being able to retain respect while talking about ironing your balls — twice — is to walk the narrowest tightrope ever woven from the floss of the tiniest inchworm.

Insisting upon being taken seriously often has the opposite effect. Last week, Jonah Hill sat down for an interview for Rolling Stone’s marijuana issue and things got pretty tense as Hill swatted the reporter’s admittedly goofy questions away like bothersome bees, slugging back with irony-smacking quotes like “I’m fucking 29 years old and not some angry kid.” I’m fucking 29 years old! AND NOT SOME ANGRY KID! Maybe Hill wouldn’t have gotten such harsh feedback if his equally or more-esteemed This Is the End co-stars, whose interviews were placed around his in the article, hadn’t been so game to talk about farts and smoke an electronic weed cigarette. James Franco, Seth Rogen, and Danny McBride seemed to know the score: The interviewer was not out to get them, he was out to help them. Perhaps the questions weren’t as reverential or austere as a subject would hope, but interviews that are satisfying and safe to give usually wind up dull and publicist-martialed, and it’s hard to think of a better target audience for This Is the End than Rolling Stone’s 420-friendly demographic. It was meant to be a symbiotic piece, the kind of item that both humanizes and gently exploits its subject, giving the cast an opportunity to paint (psychedelic, black-light) portraits of themselves by getting just mischievous enough to spark intrigue. One of the worst parts of being a celebrity must be the constant baiting, the teasing out of a potential explosive reaction, played out most violently in paparazzi shoving matches and tabloid sneak-shots. Interviews are different, and at their best they gently milk the same candidness out of the celebrity that we crave so badly we’d yank it out with our claws if we had no other option.

Clooney was smart. He made a claim that’s mostly unverifiable (there can be no further conversation about how his balls are hanging unless he decides to have one), yet strange and vivid enough to bump him to the top of the relevancy pyramid for a spell, which is always a good thing if you’ve got 12 projects in development and five in production. And chances are we won’t even remember why we cared at all the next time we see his name float by on a big screen. These kinds of jokes are engaging because we’re not totally sure if we’re being messed with, and that requires a sharp understanding of the media machine, a machine no one particularly likes but which we’ve all accepted as the thing that packages our fluffiest information. Everyone wants to look good, and everyone wants to be respected, from the entertainment beat reporter to the celebrity to the readership being targeted. We take turns producing and consuming, and breaking this Hollywood Human Centipede by insisting that you’ve transcended it, like Hill, has the effect of making all parties feel like fools. The only way to deflect it is to choose your own stinky albatross to string around your neck, a temporary, gawk-inducing accessory that makes us feel as if we’re taking a peek at what was formerly private. It’s risky in more ways than one, but hey — at least the ball’s in your court.

Filed Under: Celebrities, George Clooney, Jonah Hill, This Is the End