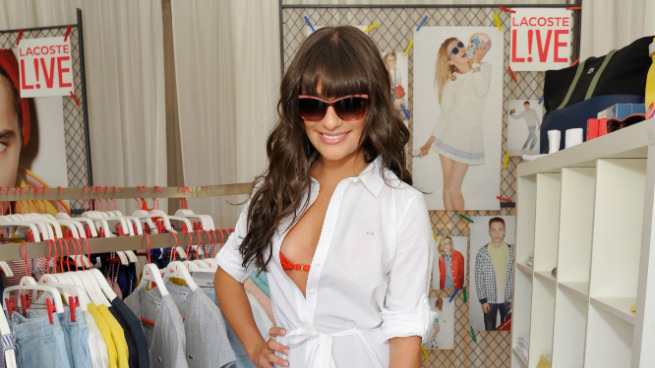 Did you get boned out of passes to The Big Music Festival in the Desert? Still madly scouring Craigslist for your golden ticket to join the tanned and perfectly styled hordes in Indio? Maybe it’s time to call up your agent and see if they can broker something with Campbell’s Soup or Hewlett-Packard or any one of hundreds of brands that could probably still use some representation in the VIP section of the Coachella Valley Music and Arts Festival. Oh, you’re not a B- or C-list celebrity? Never mind then.

File this under Things That Were Inevitable, But No Less Grosser for It: The New York Daily News is reporting that at least two companies are now paying celebrities to attend Coachella as brand ambassadors. First, we have Glee’s Lea Michele, who the Daily News reports “will earn a cool $20,000 from Lacoste to wear its clothes while she rocks out to headliners OutKast, Muse and Arcade Fire.” Cool, I’m sure Eddie Vedder had this in mind when Pearl Jam first played the Empire Polo Field in 1993 as a means of boycotting Ticketmaster. Then there’s Vanessa Hudgens — Spring Breaker, Coachella veteran, and former star of the other high school musical — who will be paid $15,000 by McDonald’s presumably to lick “special sauce” off her fingers on the perfectly manicured lawn of the polo grounds.

It is also rumored that other stars are currently looking to get in on the Corporatechella bandwagon, and they have asking prices: Aaron Paul will reportedly do your brand’s bidding for $15,000 and “at least” two VIP passes, while Joe Jonas and Kate Bosworth are also asking five figures for their services. In a way this is just the next logical step after the endless parade of sponsored parties and corporate encampments that orbit the festival grounds like so many dehydrated Zedd fans around a water trough. And a handful of sponsored outposts always have some real estate on the lawn; just add A/C and you’ve got a tent packed full of headdressed “music lovers” as your captive audience for your latest HTC phablet pitch. But it used to be that you had to travel off-site to see Carmen Electra feast on an enormous McWrap-shaped birthday cake. Now the man is on our front lawn, literally.

I, for one, am quite curious to see who, if anyone, eventually snaps up Paul. I feel like if Frito-Lay doubled his price and threw in a swanky rental house with a pool, it could probably get him into the full-body Funyuns suit for at least the length of the MGMT set. Paul would do well to at least consider it; if nothing else it would take some of that #coachellastyle planning off his shoulders.