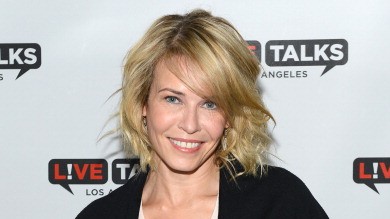 Is it time? Will American late-night network television, in the post–David Letterman era, be prepared to cede space to someone other than a wry white male? The Wrap says maybe, and that behind the maybe stands Chelsea Handler, 39-year-old E! late-night host, author of four books, including Are You There, Vodka? It’s Me, Chelsea, and star of 2012’s ill-fated NBC sitcom Are You There, Chelsea?

“CBS contacted Handler to discuss the potential of hosting a syndicated show in the wake of her announcing this week that she’s leaving E! when her contract expires at the end of the year. But Handler has told CBS that she isn’t interested in that option. As a result, CBS then expressed interest in considering Handler for Craig Ferguson’s 12:30 a.m. slot.” Recall last week’s story about CBS trying to woo John Oliver for Ferguson’s spot before Oliver went to HBO. The network really seems to want an edgy cable veteran in the mix.

Handler is reportedly gunning for Letterman’s Late Show rather than the double-Late; she’s supposed to be meeting with CBS CEO Les Moonves sometime soon. “Either timeslot would make her the first woman to host a late-night broadcast show since Cynthia Garrett hosted NBC’s Later from 2000-2001,” The Wrap notes. (So I stand corrected. American late-night network television was once ready, but reverted to unreadiness again for a good long while.) “Of course, she’ll have to prove to CBS that she can break out of her niche audience and appeal to a more general audience for CBS to consider her for the spot.” The Hollywood Reporter struck a similar note last week in regard to Craig Ferguson, saying “his show is perceived as a more niche chat hour built around his quirky interview style rather than a mainstream variety show that has embraced the digital era, as Jimmy Fallon has at NBC and Jimmy Kimmel at ABC.”

Handler is definitely a niche host at the moment, but she’s leagues ahead of Ferguson in the digital sphere. Compare Chelsea Lately’s 323,518 YouTube subscribers to The Late Late Show’s 11,588, or Handler’s most popular videos (“Keenan Cahill and 50 Cent”: 13.8 million views; “Justin Bieber”: 6.35 million views) to Ferguson’s (“Craig Ferguson — Toronto Mayor”: 31,161 views; “Craig Ferguson — American Accent”: 29,492 views). As far as Twitter followers — which I doubt CBS execs fret over too much — The Late Late Show has 22,800 and Ferguson’s got almost 1.9 million; Chelsea Lately has 427,000, while Handler herself has 5.5 million.

There are a few other important things to know about here. One’s that Handler has reportedly been in discussions about “a weekly radio show on Sirius XM with a taped version of the show on Netflix,” and potential gigs with CNN, HLN, and FX. But “the Letterman spot has changed things for her. It is now No. 1 on her list.”

The other not-so-little bit is that a certain beloved Comedy Central personality is rumored to be the most-wanted person for Late Show. “Stephen Colbert is CBS’ top choice to replace the retiring David Letterman, and has indicated that he’s willing to take over the Late Show when the time comes,” sources on both sides tell Mashable. Former Deadline editor Nikki Finke had a line on the same story as early as the day of Letterman’s retirement announcement; her sources said Colbert was “the only one on the air currently that CBS is considering.” Mashable writes that Colbert hasn’t entered formal discussions yet, but that he’s been in contact with CBS for some time. “Though CBS has had conversations with other candidates, including Colbert’s Comedy Central counterpart Jon Stewart, individuals with knowledge of the situation say Colbert is currently the front-and-center candidate.”

Anyway, Letterman himself said he’ll probably be around “at least a year or so,” so we can look forward to this “who’s the new Idol judge?!”–style frenzy for a long time to come.

Who's That Guy? Frank Grillo (From 'Captain America: The Winter Soldier')!