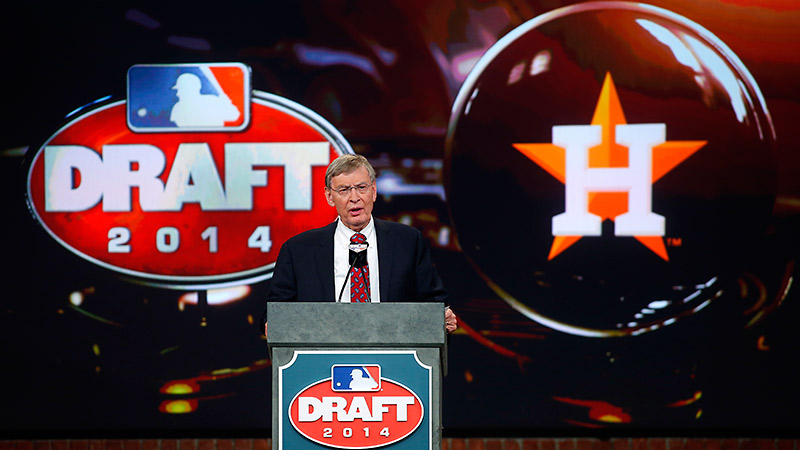 Who Is He? Left-handed pitcher Brady Aiken.

Where Is He From? Cardiff-by-the-Sea, California, by way of Cathedral Catholic High in San Diego.

How Old Is He? He’s 17. While he’s not the only player in this draft class who was born after the Braves won their last World Series, with an August 1996 birthday, Aiken is one of the youngest players in his class. He’s still older than Lorde, though, so there’s that.

His Game in 27 Words: It’s tough to find faults with his game: potential for three plus pitches, good control and command, deceptive left-handed delivery, good size, no red flags for health.

Social Media Presence: He’s on Twitter at @bradyaiken10, with a much more disciplined account than you’d expect from a high school jock: He tweets sparingly, and mostly about the draft. He does seem to own only one shirt, though.

Here's an image from last night's presentation of the International Performance of the Year Award to @bradyaiken10 pic.twitter.com/2BHdTHDocp

It’s cool: Houston’s about to give him a signing bonus in the mid-seven figures, so he should be able to afford a shopping spree before he goes to the majors.

YouTube Highlight: Go to about 0:40 in this video of Aiken’s appearance at the 2013 All-American Classic for his battle with Michael Gettys, a Georgia high schooler who went no. 51 last night to the Padres. I say “battle,” but Aiken really just took Gettys’s lunch money in this at-bat. Aiken, then only 16, mixed in a 91 mph fastball with a 74 mph curve, which he backdoored here to strike out Gettys.

Bonus points for Gettys’s impressive set of Bama Bangs in this clip.

Is He Really Only 17? He does have kind of an old face, doesn’t he? I think he looks like Tom Verducci.

Is He Really the Best Player in the Draft, or Did the Astros Get Cute Again? The consensus seems to be that Aiken is this class’s top prospect, and even people with personal preferences for Carlos Rodon, Alex Jackson, or whomever else would concede that it’s close. Aiken might sign a slightly under-slot deal anyway, but the Astros picked him because he was the best player on the board.

Should We Know Him? Of course. Because he’s so young and the Astros have kind of a conservative approach for bringing up young pitchers, I doubt we’ll see Aiken in a major league uniform anytime soon. We’ll see any number of college pitchers from last night’s first round — Rodon, Aaron Nola, Sean Newcomb — in the majors before we see Aiken.

That said, what makes me so excited about Aiken is how he came to be the no. 1 overall pick. Going into the season, his fastball was pedestrian, but he’d already picked up rave reviews from scouts and a trophy case full of awards with the U-18 national team because his command and secondary stuff were so good. Twelve years ago, another tall, skinny high school lefty from San Diego went in the first round on the strength of his command and a plus changeup, and if Aiken turns into Cole Hamels, I imagine the Astros’ scouting staff would be extremely pleased.

But this spring, Aiken started sitting 92-94 with his fastball and touching 97. Puberty affects us all in different ways, I guess. Between the age, the secondary pitches, the delivery, and the command, Aiken was already a first-round pick with an average fastball, and then he turned into a potential stud once that fastball showed plus. It’s not like the 2017 Astros will need that much pitching help if Mark Appel and Mike Foltynewicz pan out, but Aiken could turn out to be the best of the bunch.