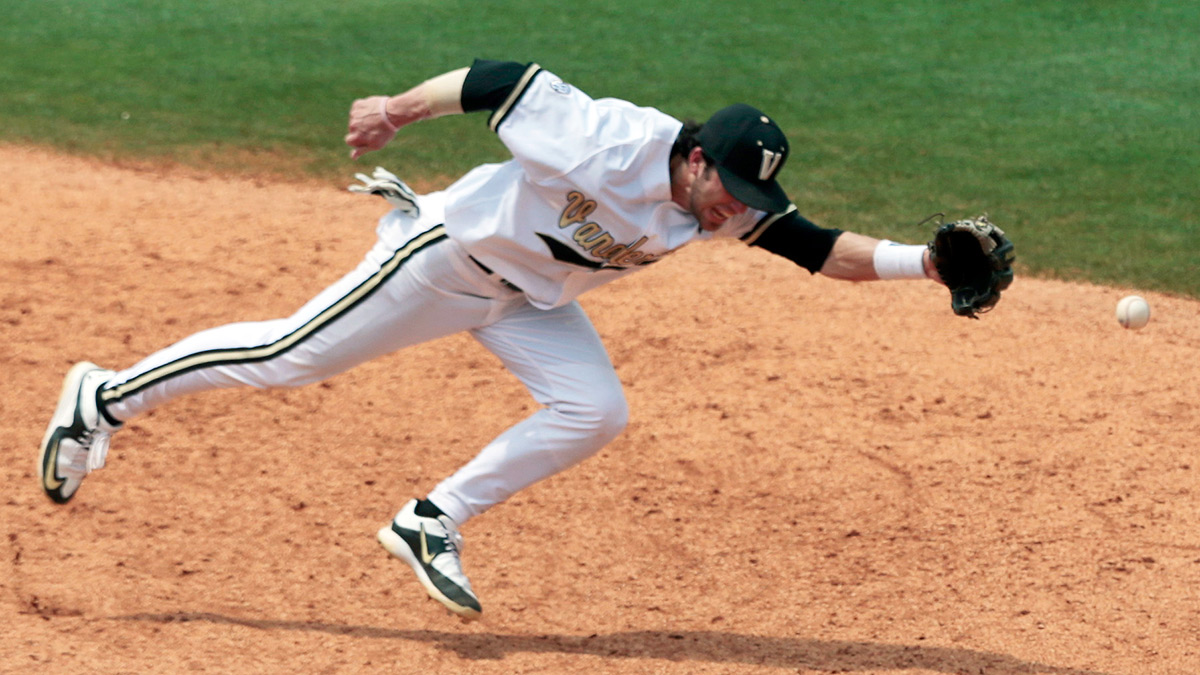 Who’s That Guy is an ongoing Grantland series and an orientation tool to use in the vast sports landscape. And, hey, baseball is part of that landscape!

Who is he? Vanderbilt shortstop Dansby Swanson, whom the Arizona Diamondbacks selected no. 1 overall in the MLB draft on Monday night.

Where is he from? Marietta, Georgia, by way of Vandy, where he became the Commodores’ second no. 1 overall pick, following David Price in 2007.

Has anyone ever had a better 15 minutes than Swanson had on Monday? Maybe? I don’t know. For those of you who aren’t up on the latest college baseball news, here’s what happened this weekend: Vanderbilt, the defending national champion, visited the University of Illinois for a best-of-three super regional, with the winner going to Omaha for the College World Series. After a 13-0 win on Saturday and a rainout on Sunday, Vanderbilt punched its ticket to Omaha at 6:02 p.m. local time, thanks in part to Swanson going 2-for-4 with a home run, a double, and a stolen base, primarily off Illinois super-lefty Tyler Jay. By 7 p.m., Swanson went no. 1 overall to Arizona, Jay went sixth to Minnesota, and Swanson’s roommate, starter Carson Fulmer, went eighth to the White Sox. Later that night, another Vanderbilt pitcher, Walker Buehler, went no. 24 overall to the Dodgers. I covered this game for D1Baseball.com and was able to catch up with Swanson afterward, which allowed him to answer the question “Who’s that guy?” at least partially in his own words.

So how about those incredible 15 minutes?

“I say you couldn’t have scripted it any better,” says Swanson, who stopped for a hug and mutual congratulations with both Jay and Fulmer during the interview. “To have a great team win and be able to celebrate, and when you get done, watch it on the phone with my parents, my brother and sister. David Price was here, who was the no. 1 pick. Former players Jared Miller and Navery Moore, those guys are here. Fan base sticks around, best friends, teammates, all right next to me. And it all happened at one time, it’s just this huge … Wow.”

David Price was there? Yeah, the Cy Young winner had an off day, and the Tigers are in Chicago today, so he came down to Champaign and sat in the stands, cheering like a normal person would when his alma mater does something good in sports. He and Swanson have struck up a friendship, and Price was on the field celebrating with the Commodores when Swanson was picked. And while Swanson is going to be Price’s adversary in a year or two, he’s enjoying having the Tigers ace on his side right now.

“I think it’s sick,” Swanson says. “It’s one of those things where people are like, ‘Wow, David Price!’ But when it comes down to it, he hangs out with us. We’re cool with him, we’re friends with him, he’ll do anything for us.”

Did going through this process alongside Fulmer help Swanson? Players as good as Fulmer and Swanson, on teams as good as Vanderbilt, find themselves spending May and June caught mentally between the draft and the playoffs, and Swanson says the two leaned on each other heavily this year.

“It’s just one of those things that’s good to get off your chest with somebody who’s going through the same thing,” Swanson says. “It’s kind of like your getaway, because you don’t really want to talk about it with everybody on the team, because they’ll think all your focus is on that, so it’s good to have that outlet.”

What kind of a name is Dansby? “It’s my mom’s maiden name,” Swanson says. If and when he makes the bigs, he’ll become the first Dansby ever to play in the major leagues, though the exquisitely named Leonidas Dansby played four seasons in the minors in the 1950s. (According to Swanson’s Vanderbilt bio, his dad goes by “Cooter,” so it could be worse.)

His game, described by someone who isn’t Dansby Swanson: He’s a good defensive shortstop who can hit for power and run like crazy. Physically, Swanson grades out as average or better at pretty much everything. Statistically, he hit .350/.442/.661 with 15 home runs and 16 stolen bases in 65 games in what’s probably the best amateur baseball league in the world, the SEC. Factor in that there are at most 10 to 15 guys on the planet who can be even a competent defensive shortstop and an average major league hitter at the same time, and you begin to appreciate why Swanson went no. 1 overall. He’s the player I’d have picked, particularly in a draft that lacked a talent like Bryce Harper or Stephen Strasburg.

What’s his walk-up music? “Out Here” by Mike Stud. “It kind of gave me a good vibe when I go up to hit,” Swanson says. “I don’t like to get too pumped up or too mellowed out. Honestly, I like to be happy when I go to hit, because it makes me just lock in.”

Since I’m old and therefore have no idea what the kids are listening to, I’d never heard of this song, but having now listened to it, I can vouch for it striking that balance between pumped-up and mellowed out. Also, I’m going to insist that from now on, everyone must call me Mike Stud.

What’s his favorite thing to do on the baseball field? “Offensively, I’d say I like hitting doubles and triples,” Swanson says. “I like to hit it, and then watch it and be able to go run. And then, I wouldn’t say [it’s my signature] play, but ever since I was little, I always slid on one knee in the hole and caught it, then threw to first. So definitely that for defense.”

Who does he model his game after? Nomar Garciaparra. Swanson doesn’t have that kind of hit tool, because nobody does, but he’s probably a better athlete and defender than Garciaparra. Because of the paucity of quality major league shortstops right now, there’s not really a perfect contemporary comp for him.

What’s his most underrated attribute? His hair. Swanson’s got a phenomenal head of hair, which, even after wearing a hat and sweating all day, looks like something normal people would pay big bucks to imitate.

Should we know him? Absolutely.