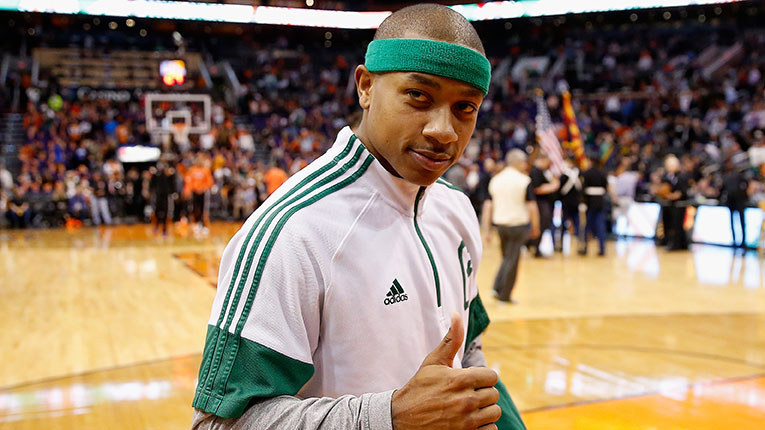 You already know that about 8 percent of the NBA’s players switched jerseys before last Thursday’s trade deadline. You also already know that roughly 1,487 of those trades involved point guards. Given all of that churn among the backcourts, we’ll forgive you if you didn’t notice that Isaiah Thomas’s move to the Celtics meant he’d be reunited with Avery Bradley. The Tacoma Twosome comes to Boston!

The what? THE TACOMA TWOSOME.1 Thomas and Bradley both grew up in Tacoma, Washington, and played on the same AAU team. Now, they’re tearing it up on the Celtics.

It's crazy that two guys from the same neighborhood are in the NBA & on the same team!! #253 #HillTop #Tacoma

Who are they? At age 26, Thomas, a.k.a. the Pizza Guy, is a fourth-year pro who signed with the Phoenix Suns this past offseason after spending the three previous seasons with the Sacramento Kings. Before entering the NBA, he played three years of NCAA hoops at the University of Washington, where he was a two-time first-team All-Pac-10 selection.

Bradley is two years younger than Thomas, but he’s got an extra year of NBA experience under his belt, as the Celtics drafted him in 2010 after his freshman year at the University of Texas.

So, they were like best friends and now they’re playing together? How cute! Not exactly. They definitely knew each other growing up, per the AAU detail, but they never crossed paths in high school. Both players actually left the state of Washington to play for prep schools elsewhere — Thomas in Connecticut, Bradley in Nevada — before the two had a chance to go head-to-head during their prep days.

Still, that didn’t keep Thomas from gushing about his new teammate: “I’ve known Avery almost my whole life. We played in the same AAU program. We grew up in the same neighborhood. It’s good to have a guy like that who’s not just a friend, but more like a brother. He’s had a great career so far and I look forward to work with him.”

Bradley returned the love: “He was an older guy who was the best basketball player in the area, so we looked up to him.”

You know what? If you want to think of the two as best friends, it wouldn’t be too much of a stretch. Just look at this photo:

How are they doing in Boston? Here’s Thomas’s two games as a Celtic:

And here’s Bradley over the same time span:

Not bad! But what doesn’t get picked up by the box score is Thomas’s dagger against the Suns on Monday night and the way he subsequently stared down the Phoenix bench:

Look at how he and Bradley meet up after both those shots. That’s the most fun I’ve ever seen Thomas have playing in the NBA.

Why’d Phoenix ship this guy off, anyway? Well, if you paid attention to the way the Kings dealt with him last summer, this might sound familiar: Suns general manager Ryan McDonough said the organization made the trade because Thomas “wanted to start. He views himself as a starter.”

When he came to Boston, Thomas rebutted McDonough’s sentiment by offering a lukewarm endorsement of Phoenix: “I had no complaints, other than I wanted to play more. Other than that, I liked it.”

To be fair, I think Thomas can be a starter in this league. Not a very good starter — he plays at the league’s deepest position, he’s 5-foot-9, and there are some holes in his game — but when the trade initially hit Twitter and it looked like he was going to Philadelphia, I thought Thomas had finally landed in a place where he could be the undisputed top option. How foolish I was to think that the Sixers would trade for an actual NBA player! Thomas’s name just got mixed up with Isaiah Canaan in all the trade-deadline chaos.

But he’s going to be starting for the Celtics, right? Not quite. He’ll be the sixth man in Boston while the Celtics develop 2014 lottery pick Marcus Smart in the starting backcourt.

That is, until Thomas is traded again because he wants to be the starter elsewhere. For now, though, at least he has his buddy Avery Bradley by his side. Just try to say that you don’t want the Tacoma Twosome to start every game for Boston after staring at this photo for another 90 seconds: