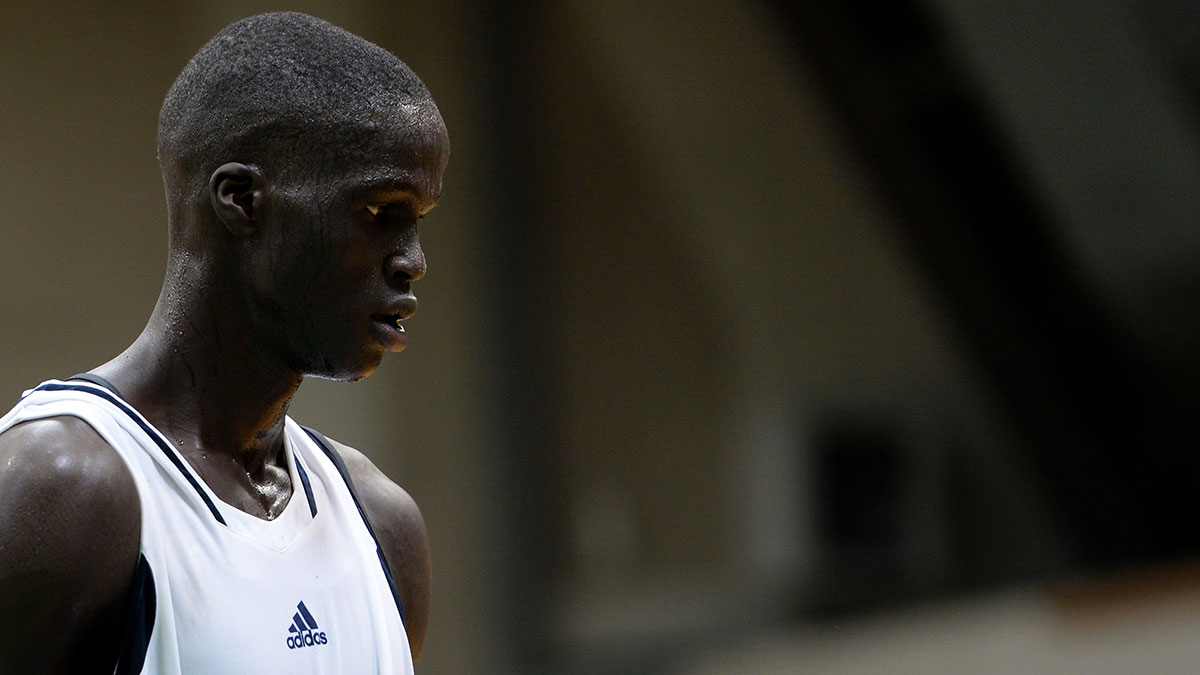 After a year of speculation, a couple of announcement delays, and a reveal that didn’t quite tell us anything we didn’t know, we can say with some conviction that the future is arriving earlier than expected. Just as we expected.

Thon Maker, one of the most unique (and viral) basketball talents of this generation, will likely graduate high school in the summer, which would bump him up from the high school class of 2016 to the class of 2015. In light of recent rumblings about the push for freshman ineligibility in the NCAA and Adam Silver’s repeated preference for a two-and-done system, Maker’s decision has come at an interesting juncture.

No one knows what could change in two or three years. The National Basketball Players Association will likely opt out of the collective bargaining agreement at the end of the 2016-17 season to renegotiate portions of the CBA as it relates to the massive boon of the new TV deal. Another work stoppage could be in play. By reclassifying, Maker has distanced himself from 2017’s impending blast radius. He is an avatar of basketball’s future trying to take advantage of the present system before it implodes.

I doubt any of this is on Maker’s mind. These are doomsday scenarios without zombies or crossbows; they’re irrelevant to an 18-year-old. The decision to move up a grade is simple, and purely individual. This is a kid with NBA dreams, and reclassification brings him one year closer to realizing them. Nothing else about Thon Maker, or our perception of him, is that simple.

Here’s a story about the birth of modern hype in basketball.

With 5:40 remaining in the second quarter of a 2002 high school basketball game between St. Vincent–St. Mary and Oak Hill Academy, a 17-year-old LeBron James delivered a no-look, behind-the-back bounce pass between two defenders on a fast break at full acceleration. Catch your breath, read that again, and watch it above. Dick Vitale, part of an ESPN announce team that included Bill Walton, couldn’t stop screaming — nothing out of the ordinary, until you realize 20 seconds have elapsed and he’s still going. Walton, patron saint of hyperbole, bluntly asks Vitale to calm down. LeBron was screaming, too. He starts to walk back toward center court, away from the wreckage that resulted from his wizardry. Looking at the passion on his face, you’d think he just dunked on someone. Truth be told, he doesn’t even log an assist on the play — his teammate was fouled on the layup attempt. But everything that came after the pass was inconsequential. The statement had already been made: LeBron James is the most talented player in the world.1

American Idol debuted in the summer of 2002; finding greatness out in the wilderness was an American obsession beginning to bloom. The SVSM–Oak Hill game was nationally televised on ESPN only months later, and it solidified the concept of the blue-chip recruit as celebrity. The game predated the launch of YouTube by a little more than two years. LeBron’s pass set the foundation for what would soon become a 24/7 hype cycle for high school recruits — a snapshot of greatness to whet the appetite and let the mind wander. The ever-changing commodification of young athletes evolved from a national broadcast on the most powerful sports entity in media to videos from niche, low-budget videographers who found a home in Web 2.0. Seems a little strange, maybe even backward, but the future never quite pans out how we chart it.

Maybe you’ve seen the headlines Maker has generated from the outsize hype of his Vines and YouTube mixtapes. Headlines like “This basketball recruit looks like a 7-foot Kevin Durant–Chris Paul combo.” Yes, it’s ridiculous to be talking about a kid like that, but these comparisons aren’t thrown out without reason. Think of them as you would notes on a wine or beer from a sommelier or a cicerone. They’re reference points, words with affixed meanings that can jump-start critical thought. Hints of cherry, a piney finish; Durant’s smoothness, Kevin Garnett’s wiry-strong frame — they’re like algebraic expressions, symbols that lend a variable some context but don’t establish what the variable is.

Unfortunately, most of us tend not to see prospects in expressions, but equations to be solved. So when we see Durant and Garnett references floating around Maker’s name, the mind wants to treat it all like basic arithmetic. Three-quarters KD plus one-quarter CP3 equals Thon Maker? Where do I deposit my blood and soul in exchange for this god-child?

“I always think he has KG’s competitiveness,” Blunt said. “I think he has LeBron’s poise, where he’s not up and down. He’s always kind of even-keeled. I think he has Dirk’s kind of skill with the size and skill ratio. I just think he’s a hybrid or a combination of so many different players, and that’s what makes him so unique.”

That’s how things get messy, and the past is loaded with precedents. Expectations form like gluten, and as soon as our fixed equation stops aligning with the product we actually see, that’s when we start imagining allergies.

When you’re described as “revolutionary” at the age of 16, there’s a whole lot more room to fall than there is to rise.

Maker’s physical profile can’t be ignored. He is a 7-footer in the shape of an Ikea artist figure who glides as a guard does, which, linguistically speaking, is a sidestep of the more hackneyed “guardlike” marker. There is a difference. It’s clear when you watch Maker move.

There are a number of big men at the highest levels of basketball who can approximate guard skills. Anthony Davis’s creation myth is basically Captain America’s: an unremarkable backcourt player who, due to forces out of his control, gets huge and transforms into a human weapon overnight. Davis’s “guard skills” largely revolve around his uncanny sense of timing. He handles the ball well for his size, but when he runs the floor, he is still unmistakably a 4 or 5. It isn’t a tangible hindrance, but you can see at least a bit of the awkwardness that’s built into being that large of a human being. There aren’t too many traces of that with Maker. He turned 18 today; he’s still in the early process of learning what his body is capable of.

In 2013, when asked what kind of basketball player he is, Maker lets out an enormous sigh, and says that, as of that moment, he is playing the 5 but wants to be a forward. A point forward, he says at first, but he cuts himself off. “Small forward, or the 4.”

His hoop dreams are on the perimeter, creating for himself and others — a Theo Walcott2 on stilts, blazing past his opponents on the hardwood instead of the pitch. This isn’t a novel idea. Bigs dream of being guards; it’s a yearning pretty much inherent to the position. For a recent example, one wouldn’t need to look further than a nugget from Chad Ford at the 2012 NBA draft combine, where he mentioned on-air that Andre Drummond compared himself to Durant in an interview with a team. Context wasn’t provided, and there was no written proof or confirmation of this happening, but it’s probably enough that you can imagine Drummond saying it. Or how about recent phenom Hassan Whiteside, who felt slighted when Ford neglected to mention anything about his 3-point shooting back in 2010.

Maker doesn’t have their bodies. His gangly physique immediately recalls a young Durant, but also Ralph Sampson, Shaun Livingston, Jonathan Bender, and all that entails. He is impressively tall and impossibly thin. It is the root of all his deficiencies as a player. He struggles finishing through contact, or even holding position, against high school players. He doesn’t have the preternatural ability to score the basketball like Durant did at 17, and his impressive ballhandling can often seem ornamental, like Blake Griffin’s early in his career. His hands, after five years of playing basketball, aren’t close to matching the dexterity of his feet, which makes sense considering he’d spent much of his childhood as an overgrown soccer player. Maker’s varied but unrefined skill set finds him caught between two worlds. Can you develop a 7-foot small forward on offense and a rim-protecting big in the same body? Is that even an ideal worth pursuing?

Maker’s reclassification is only the first of many important decisions he’ll make this year. Most seem to think his next move comes down to playing college ball or playing overseas. Maker has, after all, expressed a strong desire to play in the NCAA, and he hasn’t wavered from that sentiment. As DraftExpress’s Jonathan Givony told writer Adam Zagoria, there isn’t a market overseas for young, underdeveloped big men. These are competitive professional teams that don’t have the time or patience to hand-hold as Maker gets stronger only for an NBA team to come barging in for his rights.

I’m inclined to think Maker takes a serious look at the Dante Exum route — using the year solely to improve the body and ready himself for the 2016 NBA draft, where DraftExpress projects him as the no. 10 selection. It seems like ages ago now, but before Exum cloaked himself in the enigma of his own hype, he, too, seemed like a lock for the NCAA. Instead, he waited it out and declared for the draft. His rising stock, sky-high after dominating the 2013 FIBA U19 tournament with the Australian national team, was simply too much to risk. Maker wanted to play for the Australian national team in the upcoming 2015 U19s but recently withdrew from consideration, as his academic school year ends only days before the tournament in Crete begins. Perhaps that’s the reason it seems so unlikely he’d sit out a season; the lack of an emphatic punctuation could do more harm than good to his draft stock.

But the buzz of Maker as some ungodly basketball chimera is still out there. Search his name on Twitter and experience the thirst of a nation. He is, perhaps, the one prospect who has benefited most from this modern basketball hype machine. Why wouldn’t Thon Maker consider trapping lightning in a bottle? The masses may never worship him more than they do at this very moment.