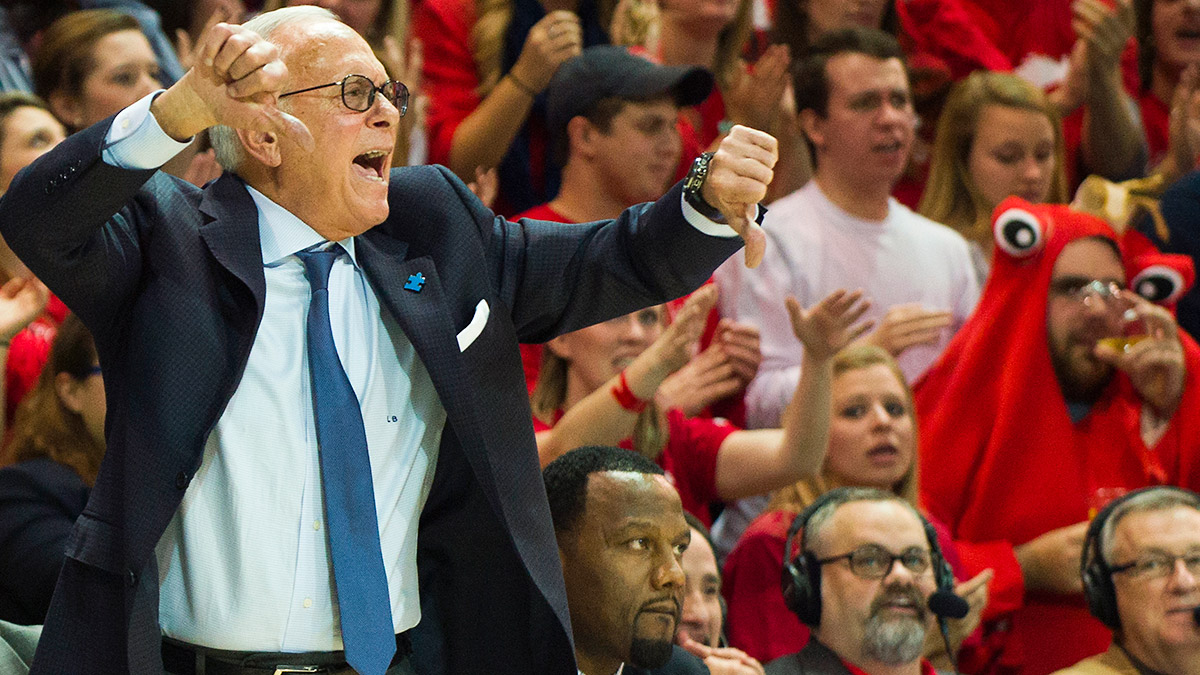 Every year, the question of whether [really good college basketball team] could beat [really bad NBA team] on a neutral court pops up. It’s being asked now about Kentucky and the 76ers, and while it’s certainly a juicy hypothetical to ponder in the lead-up to March Madness, there’s actually a far more salient query for the philosophically inclined hoops fan to consider: Could SMU’s basketball team could beat SMU’s football team … in football?

The basketball-playing Mustangs, who own a 22-5 record and no. 21 AP ranking, are nothing to scoff at. After just missing out on an NCAA tournament bid last year (and subsequently advancing to the NIT championship game), they appear poised to cruise to an American Athletic Conference title and fill the role of trendy second-tier conference pick when the brackets surface. Their counterparts on the gridiron, however, aren’t exactly their equals when it comes to the pursuit of athletic excellence.

The 2014 season may have been the lowest point for Southern Methodist University football since the program’s 1987 death sentence. The team was woefully uncompetitive, falling by double digits in 10 of its 11 losses and tasting victory just once. Its head coach, June Jones, resigned after two games, and his replacement, Tom Mason, wasn’t exactly the second coming of Paul Brown. Mason was promptly let go at season’s end in favor of Chad Morris, the former offensive coordinator at Clemson.

Morris may be a lot of things, but he’s no Larry Brown. You know Larry Brown, the only coach in basketball history to win championships at both the Division I and NBA levels. Larry Brown, who’s led a whopping eight different NBA teams to the playoffs in his illustrious career. Larry Brown, program builder nonpareil. If anyone could develop an expert understanding of football strategy in a limited window, it’d be him.

Potentially more problematic: The SMU basketball team carries only 15 players on its roster — seven short of the 22 necessary to field a football offense and defense, to say nothing of special teams. You’re probably thinking: This is preposterous, there’s no way an undermanned basketball team could defeat a full squad of FBS talent. Well, consider this: Basketball players are used to going both ways, so it’s not unreasonable to think that, say, guard Nic Moore could line up at wide receiver, cornerback, and punter when appropriate — although I wouldn’t expect his side to do much punting. Coming from a sport that requires constant motion on the part of its participants, Moore would surely welcome football’s regular stoppages in play and use them to stay fresh throughout the game.

Furthermore, Brown has 15 assistants on his staff, and due to the inequitable disparity in roster size, I think it’d be only fair to grant those assistants eligibility for this competition. While this might not initially seem like a major boon to the basketballers’ chances, their strength and conditioning coach just so happens to be — drumroll, please — former NFL tight end Rickey Dudley! Even at the ripe old age of 42, the 6-foot-6 Dudley would be a matchup nightmare for a Mustangs defense that regularly gave up 40-plus points in 2014. And considering his occupation, it’s safe to assume he’s still in spectacular shape.

Speaking of the football Mustangs’ tragicomically awful defense: In this showdown, the basketball Mustangs would need only focus on scoring as many points as humanly possible. If every drive results in a trip to the end zone — and I think we can all agree that such an outcome would be likely — their defensive performance would be rendered moot. The football Mustangs’ QB platoon of death threw more than twice as many interceptions as touchdowns last season, and there’s no way they’d be able to hold serve; the basketball Mustangs have proven they can post 70, 80, or even 90 points in a given game, and against this defense, those point totals would likely translate to football.

The easy counterpoint, of course, is that the basketball Mustangs are not physical enough to handle the rigors of a football game. But that’s bullshit, for a couple of reasons. First of all, sheer athleticism can overcome a perceived lack of physicality. Case in point:

Finally, the basketball Mustangs are one of the best defensive teams in the country, and teams that excel on defense are generally considered physical. As such, we’re forced to conclude that they’d fare just fine against the comparatively feeble football Mustangs.

So yes, of course SMU’s basketball team could indeed beat SMU’s football team in football. That’s not much of a debate. The only real question is by how much.