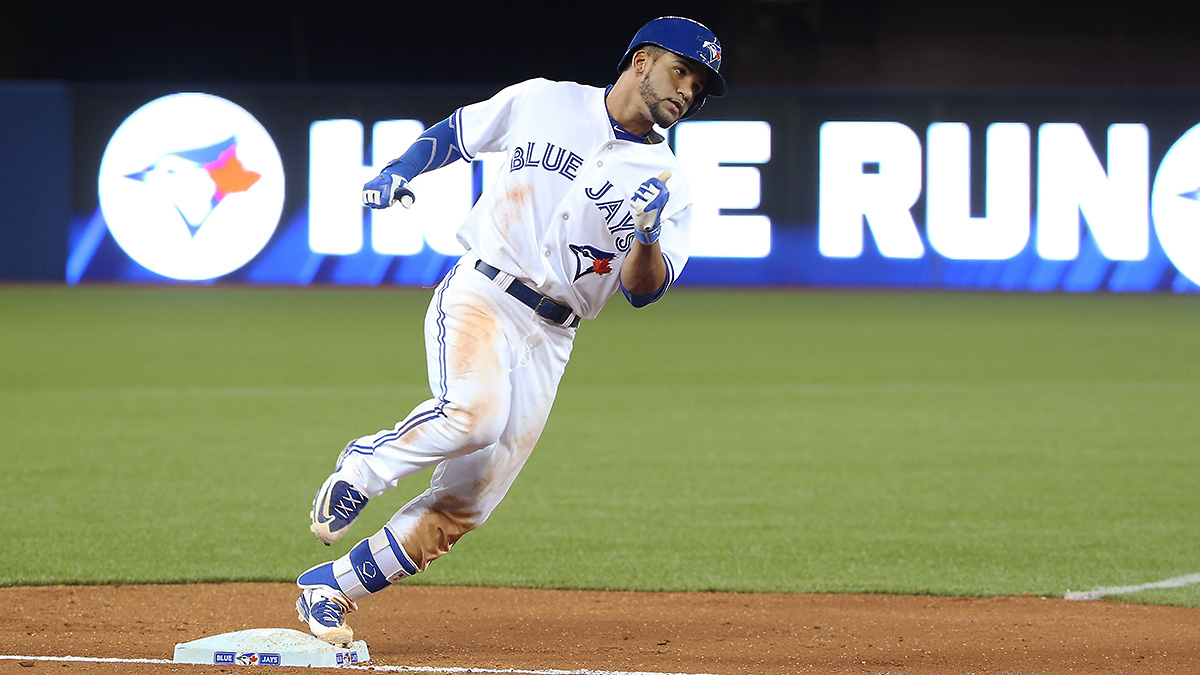 Where’s he from? West Palm Beach, Florida, by way of Florida State.

Did you know his name is an anagram for “Viva Red Snot”? That’s pretty cool.

Where might we know him from? Travis’s CV includes such hits as:

“Stealing Joe Kelly’s shoes and throwing them over the Green Monster”:

And “Home run off Drew Smyly that didn’t land until I was most of the way to second base”:

His game in 10 words: He’s a tiny man who hits oodles of home runs.

Is that surprising at all? Well, yeah. He’s a 5-foot-9 rookie who has seven home runs and seven doubles in 27 games. The list of middle infielders his size who have hit for anything approaching that kind of power is … umm … short. And our default answer to “Is this 24-year-old with a month in the big leagues the next Joe Morgan?” ought to be “No.”

Feel like giving a serious answer now that you’ve snarkily deconstructed that straw man? Sure. Yes, it’s surprising. Well, it is and it isn’t. On the one hand, Travis was a really good hitter in college, and while he was never an Addison Russell–level prospect, neither was he some no-name org filler guy — he sneaked onto Baseball America’s Top 100 in 2014. He hit at every level of the minors, too.

On the other hand, there’s a difference between being a good college hitter and being a good pro hitter, and Florida State is somewhat notorious for producing the former. Travis went in the 13th round of the draft, and while he hit well in the minors, he was largely beating up on younger competition at the lower levels, which doesn’t prove much. Finally, the Blue Jays got him straight up last fall from the Tigers for Anthony Gose, which doesn’t fill one with confidence, because Anthony Gose is awful. So yes, it’s a little surprising.

Does he have a notable social media presence? He’s got fairly standard jock Twitter and Instagram accounts, which include this photo with Daniel Norris that I’d like everyone to ponder for a moment:

Jumbo the Elephant. First time out of the country with my boy @danielnorris18 ! 25 and sunny here in Canada!

That’s either a pair of baseball players or the cover of Dandelion Unicorn Chevrolet, the debut album from Tomato Harvest, a psychedelic indie folk-rock duo from Oklahoma City that I’ve just made up. Daniel Norris really needs to tone it down — and I say this as a white guy who has a beard, plays the mandolin, and owns multiple plaid shirts.

Did Daniel Norris write Travis’s walk-up music? No, his walk-up music is something called “Backflip” by Casey Veggies, which would be a much better name than the one I came up with.

How big of a deal is this hot start? Pretty big, because second base might have been the only hole in a pretty awesome Blue Jays lineup. Forget about hitting .297/.366/.574 all year — if Travis is just a league-average player from here on out, it’ll be a huge win for a team that gave Munenori Kawasaki and Ryan Goins a combined 467 plate appearances last year.

How much of this is for real? I really have no idea. As a rule, it’s not a good idea to let one month change your opinion of a player too much, and I wasn’t an enormous fan of Travis’s when the season started. And there’s a lot that suggests he’ll come back down to earth: About one in every five of his fly balls is leaving the park right now, which is normal if you’re Chris Davis or The Mighty Giancarlo Stanton, but abnormal if you’re pretty much anyone else. Travis is also walking (8 percent) and striking out (17 percent) at rates similar to his minor league numbers, and while those are fine percentages, particularly if he’s going to hit for any kind of power, I want to see him keep it up a couple times around the league before I buy those levels long-term. And he’s hit more than 10 homers in just one pro season, so he’s showing unprecedented power.

That said, he has always hit, and now he’s hitting the ball hard. Batted-ball classifications run into the kind of issues you get when human coders put things on a linear continuum into buckets — in layman’s terms, they’re useful, if not as precise as we’d like — but what data we have on Travis is encouraging. None of his seven home runs have been cheap, and his average home run distance is up there with Mike Trout’s, Davis’s, and TMGS’s.

But again, it’s been a month, which is the blink of an eye in baseball terms, even where peripheral numbers are concerned. If he were doing this in a 112-plate-appearance stretch in the middle of his career, we might not even have noticed.

Should we know him? Well, sure. Everyone loves little dudes who hit dingers.