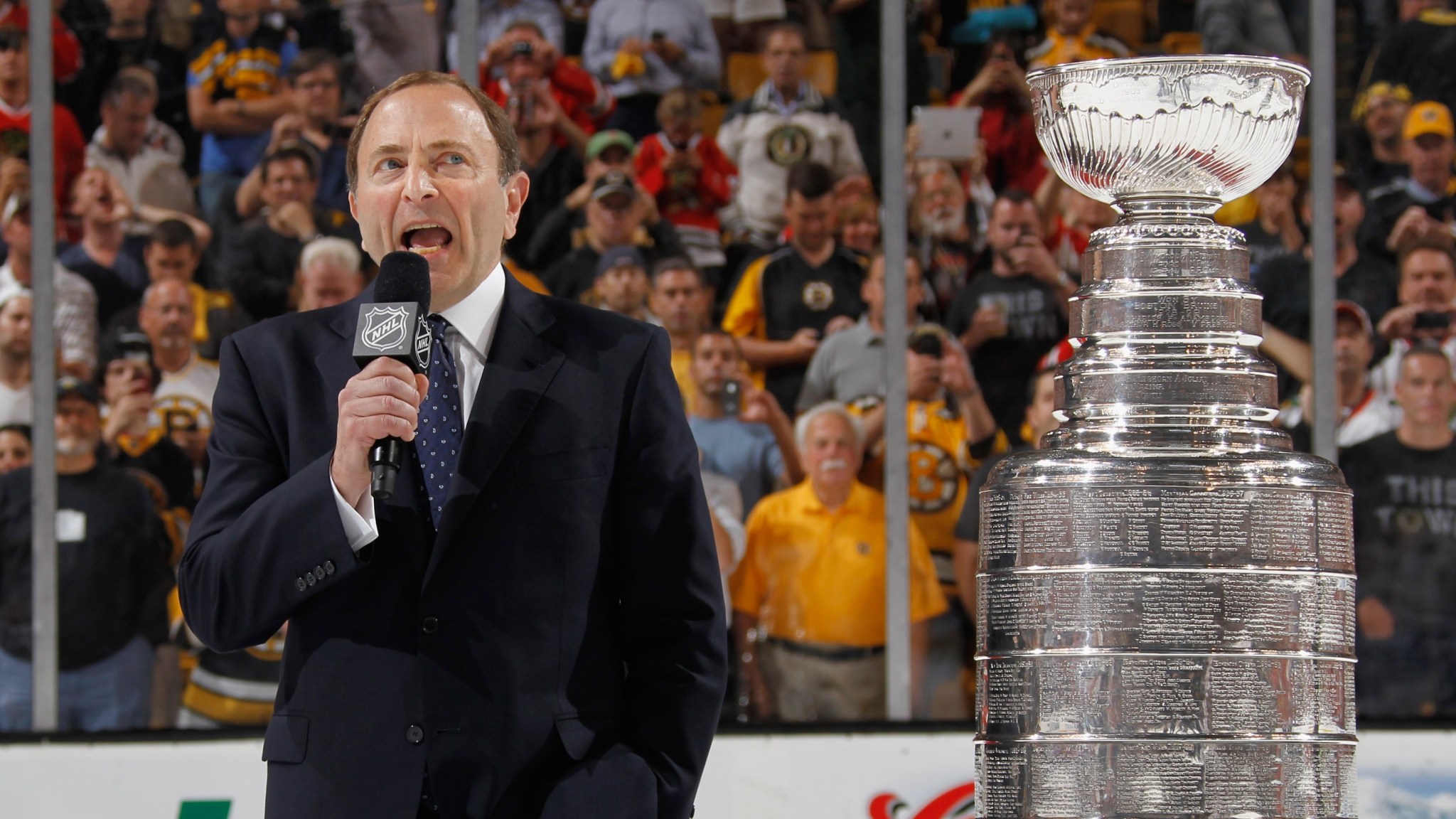 Welcome to the walkthrough for NHL Playoff Quest. In this challenging new adventure game, you assume the role of a valiant Hockey Player trying to capture the legendary Stanley Cup. But the journey is fraught with peril, and only the truly heroic can survive. This walkthrough will guide you through the various strategies, side quests, and boss fights that stand between you and winning the game.

As the game begins, you are on the bench listening to the last few bars of the national anthem. Depending on the arena you’re in, this scene will take between three and 35 minutes. It cannot be skipped. Once the song ends, be sure to hit the “Let’s Go Now, Boys” button a few times to build up your Leadership Points. Wait until your coach taps you on the shoulder, and then jump on the ice. Note: Do not jump on the ice before the coach taps you, as this will activate “1979 Bruins mode” and make the game unwinnable.

Early in the game, your character will be wearing a standard-issue set of Titanium Hockey Armor. At this point, you can decide whether or not to also don the Visor of Eye Protection; refusing to do so will make you vulnerable to career-ending eye injuries, but also unlock the “Good Canadian Boy” achievement. This is also a good time to equip a weapon.

Your hockey stick can be used to deal damage to opposing players. The basic attacks include the hook, slash, and trip. You can also execute the “Spear Junk” attack, although if you use it too frequently, you’ll eventually get a reputation as a player who spears junk even though that’s totally unfair because come on who doesn’t spear a little junk sometimes, am I right?

While you’re hacking and slashing opponents, you may occasionally see a small black disk slide by in the background. This is The Puck, and you can use your hockey stick to direct it toward the opponents’ defensive zone. (Be careful not to accidentally shoot the puck into the stands, as this will initiate the World’s Dumbest Rule side quest.)

Once you successfully move the puck near the opponent’s net, you will face your first boss fight.

In this battle, your objective is to use your hockey stick to shoot the puck past the goaltender and into the net behind him. This is trickier than it sounds, since with every few seconds that go by, the goaltender’s equipment will get larger and larger and nobody will care. The best strategy is to aim for the nearest defenseman’s shin pad and hope the puck deflects nine times before reaching the net. Alternately, if you wait long enough, the goaltender will eventually drop into a butterfly stance, increasing the amount of space at the top of the net from half an inch all the way up to three quarters of an inch.

Or you could just skate toward him at full speed, “accidentally” trip, and plow into his leg. This strategy ends the boss fight immediately.

You’ll know you’ve won the battle when you see a red light flash and hear a goal horn sound 500 times. Proceed to the next chapter.

The second chapter is similar to the first, although now you’re defending a lead, so you’ll be expected to stand in front of the puck and let 100 mph slap shots hit you over and over again. Be careful not to accidentally deflect the puck into your own net, as this will cause your goaltender to use his Death Stare attack.

At this point you may be looking for an upgraded weapon; this will require completing a side quest.

Side quest: TAKE A PENALTY

To activate this side quest, wait until the referee is facing you and then commit an infraction. To ensure the penalty is called, you’ll need to make your opponent fall to the ice. Do this by slashing or tripping him (most teams) or by skating within five feet of him (Montreal Canadiens).

When the referee’s arm goes up, you will see a door appear by the penalty timekeeper — skate to it, and enter the new Penalty Box room that has opened up. Remember to mash the “Complain” button all the way there to increase your Leadership Points.

BUG: While this quest can be attempted at any time, many users have reported that the referee may refuse to call a penalty even when he is looking directly at you. This seems to happen most often in overtime, or in the third period, or in the second period if it’s kind of a close game. The only known fix for this bug is to reload a saved game from early in the first period.

Once you’re in the penalty box, you will find a large stash of …

This weapon can hold lots of ammo and fires quickly, making it a good choice against star players like P.K. Subban and Sidney Crosby. While this weapon doesn’t typically cause much damage, if used against an L.A. Kings fan it will cause their eyes to melt.

Wait until you hear the final buzzer at the end of the period, and then attempt to skate off the ice. This will trigger a boss fight.

The boss fight begins when Pierre appears and starts to interview you. Your objective here is to stump Pierre with a fact about your background that he is unaware of. Note: Nobody has ever successfully won this boss fight. Your best strategy is to flee immediately. (While unconfirmed, some users have reported that kissing Pierre can make escaping easier.)

Once you’ve reached the dressing room, wait a few moments to ensure the boss fight is over, as Pierre will occasionally burst through the concrete wall in an attempt to continue the interview. Once you’ve successfully escaped, you will begin the next chapter.

This chapter begins late in the game, with your team still leading. The action will be more intense, and your opponents will attack in waves. This can be a good time to upgrade your character by completing the following side quest.

There are three possible ways to successfully complete this side quest:

• Becomes the league’s all-time leader in a key stat, such as sudden-death overtime goals scored.

• Guarantee that your team will win a crucial game, and then score a hat trick in that game.

• Have one or two decent shifts in front of a sportswriter who’s on deadline and out of ideas. (Note: This method will also unlock the “Better Than Crosby Hot Take” achievement.)

BUG: The Clutch side quest will never become available if you chose “European” as your character type.

At this point, you may find that your Water Bottle has run out of ammo. You can refill it by finding an infinite supply of liquid, such as a water fountain or the tears of a Flyers fan. Alternately, you can remove your hockey glove to discover a new weapon.

You may remember this weapon from the first game in this series, NHL Regular-Season Quest, in which it was the most powerful weapon in the game and used frequently. This weapon is useless in NHL Playoff Quest. Despite this, pretending that you might use it anyway will increase your Leadership Points for some reason.

Whichever weapon you have equipped, it’s crucial to be careful at all times to monitor how much damage you’re taking. Opponents will target you with increasingly violent body checks, which will deplete your hit points. If at any point your health reaches zero, you will be knocked unconscious and the screen will fade to black. When you awaken, you will find yourself in a new dungeon called The Quiet Room, which you can only escape by managing to defeat:

Press any button to skip this fight and return to the ice immediately.

You are now nearing the end of the game. Because you are still ahead by a goal, your opponents may remove their goaltender for an extra attacker. This will typically happen with one or two minutes left in the game; if you’re playing the Colorado Avalanche, it will happen midway thought the first period.

CHEAT: If you find that this level too difficult, simply access your character menu and change your name to “Patrick Kane.” This will max out your ratings and grant you invincibility for the remainder of the playoffs.

When the final horn sounds, your character will be swept away into the Celebration Pile. This is a good place to unlock the “drop an F-bomb on live television” achievement.

The celebration will be interrupted by the PA Announcer, who will summon you to center ice to take part in the final battles.

Daly will enter the arena wielding a Conference Championship Trophy. Don’t be fooled by this false ending; the trophy you want is in another castle.

Daly will attempt to hand you the trophy; be sure not touch it, as doing so will cause your Leadership Points to permanently fall to zero. Instead, access the dialog menu and tell Daly, “Hey, I heard Jeremy Jacobs needs his coffee refilled.” This will cause Daly to sprint away from the ice, and you can use your stick to destroy the trophy.

At this point, the screen will darken and ominous music will begin to play. Lightning will flash, small children will begin to cry, and you will be overwhelmed by the presence of purest evil. This signals that the final boss has arrived.

Bettman will appear wielding the Stanley Cup, along with his two henchmen, Phil Pritchard and that guy who’s not Phil Pritchard. Bettman will begin a speech congratulating everyone who has ever worked for the winning team; this cut scene cannot be skipped, but gives you a good opportunity to rest for a few hours and heal up for the final fight.

Once the presentation begins, your goal is to get Bettman to hand over the Cup before the timer runs out and training camp starts. If your character has the Amulet of Brind’Amour, you can end the fight quickly by just yanking the trophy out of Bettman’s hands and skating away. If not, you must face Bettman’s wrath.

This is a very difficult battle. Bettman will use various attacks against you, such as Awkward Photo Op, Painfully Forced Smile, and Unfunny One-Liner. You will also have to dodge the bottles and garbage being thrown from the stands. Be careful; if Bettman gets angry, he will use his Unnecessary Lockout attack and the game will end.

Your best strategy is to wear Bettman down. He is especially vulnerable to Annoying Media Questions, which will force him to deplete his Well of Sarcasm. You’ll know Bettman has been weakened when he starts checking NBA scores on his phone.

Once he has been defeated, Bettman will finally release his hold on the Cup. Lift it over your head, and then immediately hand it to the oldest player on the team to max out your Leadership Points. All that’s left to do now is to complete one victory lap around the ice through the Gauntlet of Infinite Cameramen; use your stick to clear a path.

Congratulations! You’ve successfully completed NHL Playoff Quest. Don’t forget to check the loot pile for a Stanley Cup Ring, which grants Immunity From Criticism for the remainder of your career.