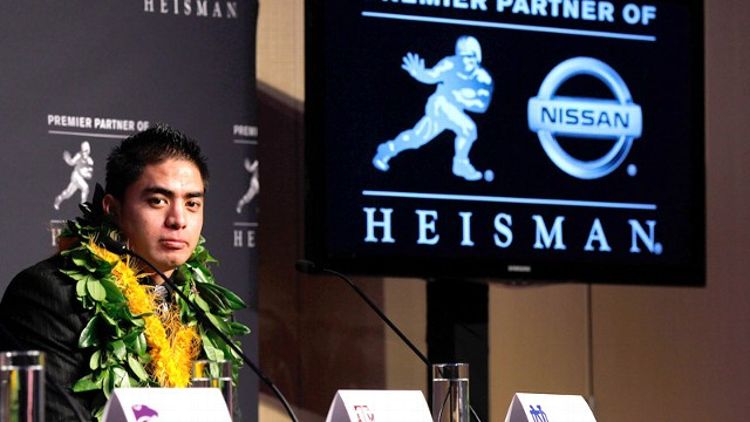 Manti Te’o’s fraudulent online emotional affair is eerily similar to Chris Webber’s timeout in the 1993 NCAA championship game. Webber’s temporary lapse in judgment ultimately defined his career despite a 15-year NBA run. Similarly, the defining moment of Te’o’s collegiate life may cast an even longer, weirder shadow over his pro career. Never mind that both were college students at the time of the respective incidents — both made timely mistakes with cultural significance that overwhelmed the rest of their public identity.

Manti Te’o is no longer ‘a good locker room guy and emotional leader.’ He is that dude who got Catfished.

This, obviously, is not your typical NCAA scandal. We’re not waiting for an apology, or for a governing body to rectify any misappropriated accolades or cash rewards. It feels like we’ve already accepted that Te’o’s on-the-field impact at Notre Dame was slightly overrated, and that he will be a marginal NFL player. At this point, we’re just monitoring the story like any other freak show, hoping to get a detailed rundown of the hoax and/or Te’o’s own emotional state. There is something dark that intrigues us about an alleged emotional leader being manipulated on the Internet. I guess college football isn’t really a metaphor for life after all.

While we tell ourselves that we are entitled to the truth, we’re perplexed by the Catfishing of Manti Te’o because it clashes with our idea of how successful male athletes are able to easily source ‘binders full of women.’ Actually, we can probably better visualize ‘Twitter follower lists filled with attractive female userpics.’ Online relationship hoaxes should only happen to schlubs living in poorly decorated apartments with limited prospects, like those crazy people on MTV’s Catfish TV show, not storied college football humans.

Think about how our lasting image of the BCS championship game was Katherine Webb, the girlfriend of Alabama quarterback AJ McCarron. Other than NFL GMs, few remember Manti Te’o and his overmatched defense humiliated by premium SEC competition. But we do remember Miss Alabama. In our heads, we envision a tier of opportunities available to alpha male athletes. While many of us regretfully accept the cards we’ve been dealt in a series of small defeats sprinkled throughout our lives, natural selection appears to have worked out perfectly for them. How (or why) did Manti Te’o fumble the social and personal opportunity that we assume he had as Notre Dame’s big man on campus?

We assume that Manti Te’o is not a ‘normal’ person. He doesn’t scan through faces on social networks, arbitrarily looking for attractive prospects, wasting hours scheming a way to get a response from a random stranger. Strangers changing our lives by way of a serendipitous online meeting isn’t required for the alpha athlete — their lives are already a premeditated serendipity. In our projections, Te’o has such strong bonds to family, friends, and the wholesome entity of Notre Dame that he can’t be plagued by routine online loneliness. Generically branded “Emotional Leaders” don’t have stray pain that can only be comforted and understood by the calming force of an unknown person on the Internet.

For years ‘online dating’ was stigmatized as an activity for desperate losers who do not have a functional social context from which to find and engage datable partners — a sad, homogeneous pool of lonely people who decided to pay some service to match them up with some other poor sap based on a series of traits that allegedly make two people compatible. What actually makes them compatible is just how ordinary they both are, giving it the guise of an ‘effective tool.’ Give up on the idea of a chance encounter at some grim bar or work-related event. Find a person that shares the same immediate and desperate relationship goals with you, and you don’t have to be that lonely person searching for a connection anymore.

Maybe we’d just like to believe that there is a fortunate subset of extraordinary humans that aren’t subjected to the randomness of modern courtship. Instead, we think that athletes select a partner as if they are selecting from a Bunny Ranch lineup, only instead of weathered prostitutes, they are actually selecting from a range of socially and physically equivalent partners.

Even though online dating has become commonplace, society still frowns upon the online emotional affair. It is a dark territory with volatile results. Instead of using a results-driven service to meet a partner, online emotional affairs are created when two partners rely on a chance meeting to forge a relationship that intensifies without any clear goals or safety mechanisms.

Anyone who enters into an online emotional affair is attached to the idea of serendipity, the idea that a chance encounter on Facebook, Twitter, or a message board somehow ‘means’ something. Next, the two parties take comfort in the controllable transparency in all emotional exchanges usually by means of chats littered with emoticons. It’s like sharing yourself without actually having to share the bad parts of yourself. Without the pressure of actually meeting, the parties can establish a routine where their emotional needs are compartmentalized into part of their online routine, which could conceivably continue forever. Check your e-mail, catch up on today’s news, and feel something ‘real’ with that person you’ve never met in real life, but they are a great listener and you have also allegedly invested in their lives! On top of that, you can simulate ‘being there’ for someone without actually having to be there, even after they are in a near-fatal car crash or fighting leukemia.

Why, Manti? Even if you’re not extraordinary, why didn’t you just do what so many other athletes do and use Twitter as a city-to-city groupie-sourcing tool? Not all athletes can be revered like SEC quarterbacks or Butkus Award winners, so just pick at the low-hanging fruit on Twitter, the virtual equivalent of a team’s hotel lobby. Even ‘players’ understand how to properly play the game. Much like you wouldn’t be advised to turn a groupie into a wife, you shouldn’t turn the girl whose Twitter avatar you’ve fallen for into your exclusive online emotional affair. This is probably just Te’o’s fault for attempting to live a life where relationships actually mean something.

Should Manti Te’o be as embarrassed as his public statement indicated? We’ve already been exposed to a steady stream of stories of male athletes using social media to connect with women in a predatory manner. It shouldn’t be so difficult to accept the Catfishing of Manti Te’o as a contained incident — commonplace, really — rather than an elaborate conspiracy or legitimate scandal. The acceptance of stereotypical gender roles typically leads to subconscious discrimination. In the case of the Alpha male athlete, it can lead to a warped inflation that goes unchallenged and unquestioned.

At this point, just about everyone has had weird online encounters that either transitioned into something ‘real’ or led to a dead end. Since the online emotional affair is based on routine, it can be terminated as easily as someone deleting a bookmark, deactivating an account, or claiming that they were quickly dying of leukemia after discovering the disease in a near-fatal car crash. So now we’re waiting to see if Te’o was in on the hoax, or if he had an extended lapse of judgment. No matter the outcome of Manti Te’o’s Catfishing, this will unfortunately seal his collegiate legacy.

Solving the Centerback Conundrum: Does the USMNT Need a Leader?