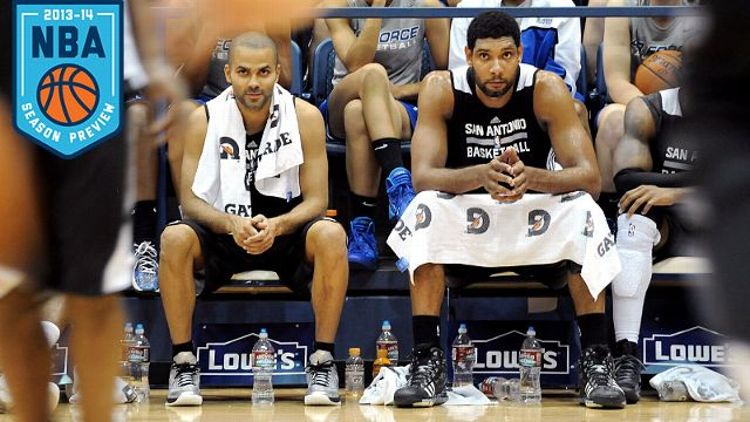 In the modern era, the Spurs have never had to prepare for a season after a potentially franchise-defining loss. After watching the team choke away the last two games of the NBA Finals, I thought my interest in the NBA would never be the same. I had wholeheartedly attached myself to the Spurs as the last crusaders for all that was right in the NBA. Just watching highlights of last year’s series against the Heat and seeing that configuration of black, white, red, and yellow still brings back all the dark feelings. Whether you want to blame Tony Parker’s hamstring, Ray Allen’s uncalled traveling violation, Manu Ginobili’s extended out-of-body experience, or you’re just a LeBron truther, we all have to move on.

Instead of pulling away from the NBA, I have chosen to enter this season with higher hopes than ever, with the ultimate rationalization: The Spurs will actually have an easier time getting back to the NBA Finals. I won’t invest in another season letting the media bully me into thinking that the Spurs are too old, or that the supplemental role players are eventually going to let the team down. Don’t listen to anyone who tells you that the Western Conference is up for grabs. These are the reasons the Spurs will cruise back to the 2014 NBA Finals, and probably even win.

LeBron James and Kevin Durant are considered the two best players in the league. For some reason, people are still attached to the idea that they play on the two best teams in the league. Westbrook’s injury did give the Spurs an easier route to the Finals last season, even though the Grizzlies were considered the Western Conference favorite during the postseason. The Spurs are still perceived to have been gifted a free pass to the Finals.

In a strange way, the Thunder can’t move on to the next phase of their franchise without actually witnessing their team fail with Westbrook in the lineup. Westbrook will enter next season being “underrated,” since NBA observers have now been calibrated to see the Thunder’s ceiling without him. Instead of focusing on his shortcomings and passionate outbursts, or questioning the decision to keep him over James Harden, Westbrook will become the most poetically praised “specimen” in the league. However, the duo of Westbrook and Durant will only achieve the loss that will allow the franchise to move forward.

Forget about the motivation, drive, and focus of the Spurs. It will be disappointing if the Spurs don’t reach the Finals because all the “contenders” in the West did nothing to purposefully upgrade their teams. Every year, we get way too excited about a few teams that are making “the leap,” even though they are just overachieving during non-competitive stretches during the regular season. Eventually, we learn that the team was constructed for fleeting regular-season success, not to win individual matchups against an established conference contender.

Just like last season, the Clippers are still the team most likely to be overrated within the first 20 games of the season. Chris Paul added Doc Rivers to his organization, but it will probably be a couple of seasons before Paul is identified as the ultimate Clipper shortcoming. The Rockets will probably also get the most reactionary praise early in the season because they are still in the feel-good honeymoon phase of “being back in the conversation” of NBA relevance. Unfortunately, this is probably the ceiling of Dwight Howard’s expectations. There is nowhere to go but down.

The Golden State Warriors will be the toughest matchup for the Spurs. But for as many problems as they can create as a team, the addition of Andre Iguodala isn’t actually useful in a series against the Spurs. Iguodala has never really elevated a team to championship contender. He’ll be great when everyone is watching the Warriors during a late-night, open-court regular-season game against a mediocre opponent, but he’ll be easy to contain in a slowed-down playoff game.

There will be no mega-showdowns with contenders that have been constructed specifically to take them down. The most glaring example is the Grizzlies, who were easily swept in the Western Conference finals. Memphis did little to improve its shooting to create space for its dual-post presence — the very thing that killed the Grizzlies in the playoffs. Former foes like the Mavericks, Suns, and Lakers have all faded.

The Spurs Will Meet the Bulls or Pacers in the Finals

While I’m riding high on this sense of overconfidence, I might as well declare that the Spurs have an even better chance to actually win the Finals this upcoming season. I’m not even afraid of the Heat anymore — they might not even reach the Finals. They are due for a loss because of the accumulated fatigue of consecutive deep playoff runs, injury, or just being vulnerable in the heightened competition of the Eastern Conference. Derrick Rose’s return finally makes the Bulls whole again, the only young team with the collective belief that the Heat aren’t even that great. The Brooklyn Nets (a.k.a. “The New Old Celtics”) have a “last stand” in them that will provide more competition than the East has had in a few years.

The Pacers forced the Heat to a Game 7 with a horrible offense that could barely run a coherent play in the playoffs. This season, the Pacers are reloaded with Danny Granger and Luis Scola. Roy Hibbert spent the summer training with Tim Duncan, and Paul George won’t have to play hero-ball anymore. With an already elite defense, the Pacers are close enough to make the NBA nightmare of San Antonio–Indiana Finals ratings a reality.

The Heat have only gotten older, added a center with terrible knees, and given Michael Beasley his last chance. Chris Bosh continues to regress, Dwyane Wade will never be 100 percent again, and Shane Battier is finally due to finally give out. Even if LeBron is invincible, the Spurs have a more stable model that ensures their return to the Finals.

The Spurs Are Still the Spurs

Led by Tony Parker, the world’s best point guard, the Spurs have the perfect system for cruise-controlling through the regular season without logging significant minutes on their older players. Teams often pressure themselves into making drastic changes after crushing postseason losses. The Spurs didn’t overthink personnel decisions; they didn’t say good-bye to Tiago Splitter (re-signed for four years and $36 million) or franchise linchpin Manu Ginobili (re-signed for two years and $14.5 million), and they didn’t splurge on a risky signing like Josh Smith or Monta Ellis. Even though early reports confirm that Danny Green still can’t dribble and Splitter holds the title of Clumsiest Effective Young Player in the league, the sum of this team’s combined abilities is still too great to overcome.

Last season, the secret trouble with the Spurs was the inability of the second unit to score at a useful rate. During most playoff games, Ginobili and Gary Neal just couldn’t be the prolific scorers in relief needed to keep the team in the game while the starters got some rest. The addition of Marco Belinelli, who allegedly “finally learned how to play defense” under Tom Thibodeau, should help. Kawhi Leonard’s development into a relevant option in the offense should further mitigate the Spurs’ dependence on Parker and Duncan.

After distancing myself from any sort of emotional attachment to the Spurs, I find the mediocre Western Conference too flawed not to expect a return trip to the Finals. Unfortunately, this means waiting through another 82 regular-season games of false narratives about “contenders” and “teams on the rise.”