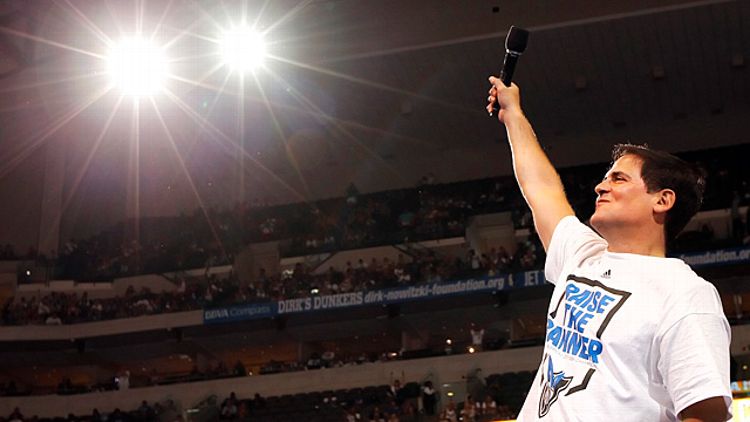 Over the weekend, Dallas Mavericks owner Mark Cuban took to his blog — normally an outpost for stock investing advice, third-way political observations, and Shark Tank updates — to explain not just the Mavs’ current offseason but the entire series of decisions he’d made since they won the championship in 2011. The complaint from a noisy section of the fan base is that he let most of the team’s talent leave so Dallas could pursue the white whale of future cap space — or, if you believe the more conspiratorial arguments, to coast off the championship win and save money.

Cuban’s post didn’t have a lot to say that he hadn’t already said in the press. But its format (sort of like a misguided apology e-mail you’d send your ex-girlfriend late at night to explain why you’d been such a dick) and its timing (Mavs season tickets, on sale now!) require some sort of notice.

Cuban has been a great owner, but maybe his investing background is starting to show. In a post from 2004, he wrote about taking his company Broadcast.com public and the “road show” they did to hype the stock. He learned that nobody knew enough to ask good questions, so he and his partner would sometimes goof around during their presentations, winking at each other with inside jokes. None of it mattered, thought the burgeoning nihilist, except the hype they created.

The most recent post is a sort-of apology for the squandered years since the championship. Obviously, Cuban sighs, he would prefer that the Mavs win the title every year, but it’s about smart investments. The 2011-12 Mavs were overhyped based on their run in the playoffs, so just like he had with a long-forgotten tech company called Gandalf, he sold his stock, and he shorted it to boot. He didn’t want to break up the championship team, but the looming lockout — first with the likelihood of work stoppage and later with its grueling, shortened season — seemed to force his decision. It wasn’t the right time for a veteran team to repeat. Except that, you know, you can make the case that it was exactly the right time for a veteran team to repeat. While the other teams were struggling to get into shape and learn offensive sets, the Mavs could have been cruising along with the same players and system from the year before. I’m not saying that’s right and Cuban’s wrong, but it’s an argument he doesn’t even acknowledge.

That’s not the only omission. He says he doesn’t like the current fad of tanking for draft picks and building from the ground up, mostly because there are too many smart GMs in the NBA now, and too many teams are going that exact route. For the investment savvy, there’s better value to be found in doing the opposite. It’s economics 101!

Even if that’s a sound real-world business strategy, it’s little more than a platitude when he leaves too many other questions unasked. Is every non–conventional wisdom building plan a smart one? (Is this why he said he’d consider going long on a cheap stock like Brittney Griner?) How can you argue that creating a culture of winning is more valuable than the draft-pick tanking will get you, without weighing the hope of a top draft pick against the borderline despair of another middling season while Dirk Nowitzki’s career winds down? How do you go from “Of course we went after Dwight Howard” to “Thank god we didn’t get Dwight Howard” in the span of a couple sentences? What does any of this say about the viability of the “get cap space and cross your fingers” strategy, which has been pretty obviously a shitty ploy since at least when Chicago ended up with Ron Mercer and Brad Miller in 2000? It’s all about opportunity cost, or something. Cuban’s fond of making arguments by proxy of popular economics, so indulge me this one: If the biggest growing markets for cell phones are prepaid burners and top-tier smartphones, Cuban sometimes starts to sound like a guy going long on Razrs to sell cheap in second-world economies. Forget good investments — I want a retina display.

Listen, I love Cuban. If he weren’t the owner, I probably wouldn’t even be a Mavs fan. I find myself agreeing with his logic more often than not. But making sound explanations isn’t the same thing as making good decisions. In a post about the stock market crashing after the Associated Press’s Twitter feed got hacked, he talks about the automated stock algorithms that caused the drop. “There is no question that there is an ongoing arms race between algorithm designers,” he wrote. It’s just as true in the NBA. Everybody wants the best algorithm for winning a championship, but nobody knows whose formula is better until the market closes. Cuban operates with a confidence that makes you want to follow him anywhere. Little wonder so many people take his investment advice so seriously. It’s the same reason why we Mavs fans can hold out hope, even as we were scanning HoopsHype every hour for updates on Sam Dalembert.

Throughout his post, the less-than-stellar offseason the Mavs have had is more or less buried under vaguely euphemistic turns of phrase like “fallen angels.” As a Mavs fan, a big part of me totally buys into this stuff. I mean, Monta Ellis is basically Jason Terry crossed with J.J. Barea crossed with Michael Jordan, right? Part of being a fan is about being enthusiastic even in the face of despair, and building enthusiasm is a big part of Cuban’s job, and it’s a job he does well. So I totally understand why he wrote this post. I don’t care if he’s just doing a sales job. I just hope he hasn’t bought into his own hype.

Ultimately, Cuban’s not a blogger, or even a marketer — he’s the owner of a basketball team. His job isn’t to make arguments; it’s to make decisions. If you judge him by the former metric, that was one hell of a compelling blog post. But the jury’s still out on the latter. He’s good at getting fans excited about next season, but it remains to be seen if this collection of spare parts and “fallen angels” is anything approaching fundamentally sound.

“Stocks go up and down depending on supply and demand. If a stock is marketed well enough to create more demand from buyers than there are sellers, the stock will go up.” That’s Cuban again talking about the Broadcast.com hype. He goes on: “What about fundamentals? Fundamentals is a word invented by sellers to find buyers.”

What Clint Dempsey's MLS Return Means for Seattle, Deuce, and the American Way (of Soccer)