What Clint Dempsey’s MLS Return Means for Seattle, Deuce, and the American Way (of Soccer) 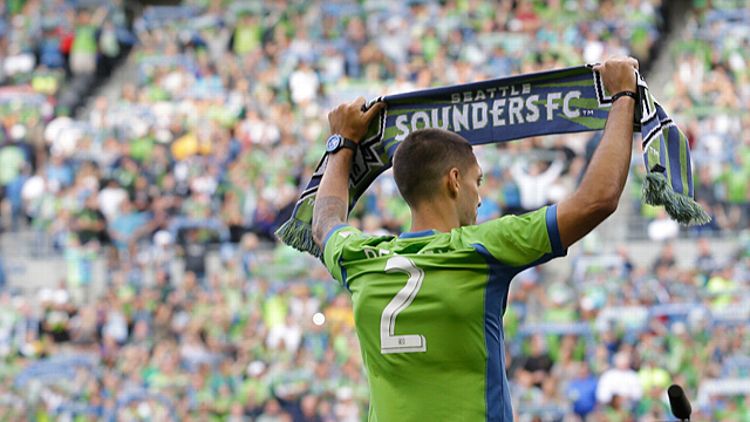 Last year around this time it was a foregone conclusion that American attacking midfielder Clint Dempsey would join five-time European champion Liverpool FC, pairing with Luis Suarez in a revamped attack, as the American-owned Reds would attempt to regain their traditional hold on one of England’s places in the UEFA Champions League. That move fell through, with Liverpool’s owners unwilling to meet Fulham’s valuation for Dempsey, who moved instead to Tottenham Hotspur.

In his first season with the club, Dempsey scored 12 goals across all competitions. This weekend, one year later, in front of a cheering crowd of 38,000 at CenturyLink Field, Dempsey was unveiled as the newest member of the Seattle Sounders. What madness is this? Clint Dempsey left Tottenham Hotspur for the Seattle Sounders. That really just happened. So let’s look at why Dempsey would leave an elite English Premier League side, and what his presence means for the Sounders and MLS going forward.

Dempsey was unlikely to play major minutes for Spurs this season. First of all there was the looming specter of Gareth Bale. Bale found great success playing a drifting central role last season, just off the striker. There is a pretty good chance that Bale will be sold to Real Madrid for a record fee, but were he to stay in North London, he’d no doubt continue to ply his trade in that same area on the field, which also happens to be Dempsey’s preferred area.

Even if Bale did pick up sticks and go to Spain, Lewis Holtby and Gylfi Sigurdsson both naturally fill the attack midfielder position, and while neither is the goal scorer that Dempsey is, they are both younger and, in Hotlby’s case, more capable in distribution. Dempsey wasn’t going to find minutes at striker either, not with the team’s big-money addition of Roberto Soldado.

In most seasons, Dempsey could afford to be second choice for a side of Tottenham’s talent level. He could play in some cup matches, start the odd game in the Premier League (Bale has a tendency to get hurt), and provide quality depth for a team actively participating in four competitions.

However, with World Cup 2014 on the way, and America’s place in the tournament all but secured, Dempsey cannot afford to risk losing minutes with his club side. U.S. manager Jurgen Klinsmann has made it clear he will give time to players who are consistently playing, and while it seems absurd to suggest that Dempsey’s place is at risk … well, say Spurs were to get eliminated from the Europa League and FA Cup before the round of 16. Say they find themselves in a heated battle with Arsenal and Liverpool for fourth in the Premier League. Andre Villas-Boas would be unable to play anything but his strongest XI every match, and Dempsey would have nothing but substitute appearances to show for the final three months of the campaign. Suddenly Dempsey’s match fitness in the run-up to Brazil would be a real question, meaning his place in Klinsmann’s side would be in jeopardy.

Additionally, the transfer fee Dempsey commands ($9 million), along with his wages (rumored to be $8 million a year with Seattle) and his age (30, or in soccer transfer terms, without resale value), meant a move for Dempsey within the Premier League without a sizable pay cut was unfeasible. Spurs did not need to sell Dempsey for a loss, so there was no bargain to be had. Remember, a highly-motivated-to-buy Liverpool club balked at these numbers a year ago. Why would, say, Everton feel like this was a wise investment now? Meanwhile, a move to another major European league came with its own set of issues. He would have to contend with the upheaval that goes along with moving to a new country, learning a new language and culture, all while trying to fit in with a new team and vie for playing time. So a move to, say, Valencia or Hamburg was probably out.

Without a reasonable destination in a top-four European league, a move to MLS suddenly made sense for Dempsey. Eliminate the desire to play in the Champions League from his calculus (which certainly would not have been a guarantee with Tottenham, anyway), and look at what Seattle provides: first-choice minutes, massive wages, a European-caliber atmosphere (Dempsey spoke to this after the USMNT’s World Cup qualifier against Panama), teammates from his national team, no state income tax, really good fishing, and a burgeoning local hip-hop scene. Additionally, because of the MLS’s designated player rules, Dempsey’s high wages represent only a $175,000 hit on the team’s salary cap. For the Sounders, whose advantage in match-day revenue and merchandising is neutralized by MLS’s salary structure, splurging on a transfer fee and relatively large wages that will likely prove to be a sunk cost because of the lack of resale value is not an issue; they can’t spend what they bring in otherwise. Altogether, this move was not a capitulation on Dempsey’s part, it was not a sell-off on Spurs’ part, and it is not madness for Seattle; it is a rational play for all parties.

Dempsey joins a Sounders team finding its form in the midst of a trying season. The team was forced to replace two of its designated players: franchise-leading goal scorer Fredy Montero, who now plies his trade in Portugal at Sporting Lisbon, and German midfielder Christian Tiffert. Tiffert’s replacement, MLS veteran Shalrie Joseph, has been a massive disappointment, and fellow designated player Mauro Rosales’s form has suffered.

The team has struggled with fitness issues, having spent time without ball-hawking central midfielder Osvaldo Alonso, former Inter Milan striker Obafemi Martins, and top goalkeeper Michael Gspurning. International duty robbed the team of forward Eddie Johnson, Brad Evans, and All-Star rookie fullback DeAndre Yedlin for stretches. Aside from Gspurning, all of these players were fit for Seattle’s dominant 3-0 win over FC Dallas on Saturday. Dempsey joins a potential MLS juggernaut finally at full strength. The Sounders find themselves just outside the playoffs, as the team nobody wants to face.

Tactically, Dempsey’s presence in Seattle will only subtly change the way the team plays. The Sounders’ first-choice front four currently has Martins playing in front of Johnson, with Lamar Neagle and Rosales wide. Dempsey can slide into the space Johnson is currently occupying, pushing Johnson out wide to the wing position he plays with the USMNT. Dempsey can also play behind the two strikers with Rosales and Evans wide behind him, and Alonso playing as a lone holding midfielder. Neagle can then serve as a super-sub with the ability to spell any of the four attackers as needed. The team also has more attacking depth in speedsters Steve Zakuani, who continues to fight fitness issues as he recovers from a serious leg injury, and draft product David Estrada. Dempsey’s presence turns an above-average attacking unit into a possibly lethal one, and it will be up to manager Sigi Schmid to figure out how best to utilize the talent on hand.

The impact of Dempsey’s return to the MLS, where he made his name with the New England Revolution in the mid-’00s, goes well beyond tactics. It says a lot about where MLS is as a league. That Seattle can afford to buy Dempsey from Tottenham Hotspur is a testament to a league that has grown leaps and bounds, and to supporters who are fueling that growth. When rumors of Dempsey’s move started to trickle out Thursday night, fans started stalking inbound flights to Sea-Tac Airport. Seriously.

Even by Twitter standards, Twitter lost its mind with #DempseyWatch.
I was in attendance at CenturyLink on Saturday, and the move still feels unreal. Dempsey unzipping his hoodie to reveal a Sounders jersey underneath is a moment unlike any the league has had since David Beckham joined the L.A. Galaxy. But unlike Beckham, Dempsey’s celebrity does not outshine what he brings on the pitch. Beckham’s biggest impact on the league was his presence. Dempsey is coming to cement his legacy as a player.

Beyond what the move means for the league, and for the Seattle diehards, the legibility of the move speaks volumes. Dempsey is already on the Mount Rushmore of outfield American soccer players (alongside Landon Donovan, Claudio Reyna, and either Brian McBride or Teddy Roosevelt) and he’s coming home with his head (and scarf) held high in the midst of a successful European career. It doesn’t take a die-hard soccer fan to understand that. A certain Grantland writer once spoke to the “the Cult of Status Quo” with regard to American soccer fans: The diehards were unwelcoming to the casual fans, alienating them from the game. Outside of the World Cup, the international game was inscrutable, and the biggest fans liked it that way. Dempsey coming to Seattle is the opposite of alienating; it’s a move that appeals broadly to the passionate and casual American fan alike. It’s a move with narrative, that pairs best friends and longtime teammates Dempsey and Johnson for the run-up to the 2014 World Cup. It’s a move that makes sense in the context of the incredibly complicated international soccer transfer system. It’s a move that brings a hero home. It’s a move that can get anyone excited about American soccer. It’s Clint Dempsey playing in America. What could be better?