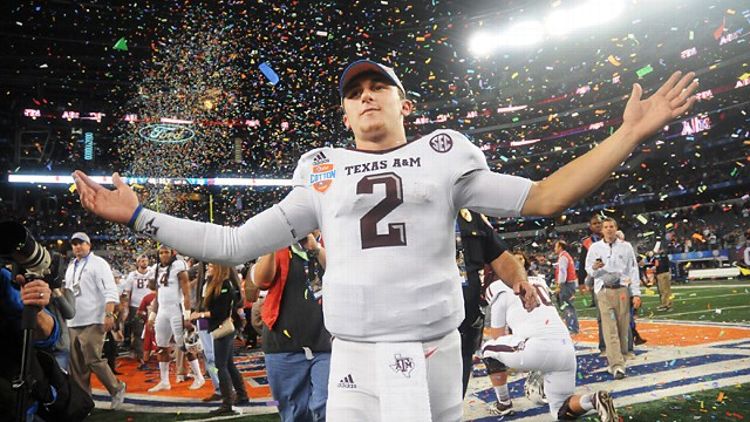 In case you missed it Sunday, the summer of Johnny Football took another fun turn with the news that the NCAA is investigating him for possibly selling his autographs to a memorabilia dealer in South Florida. Of course.

Johnny Manziel is the perfect storm for the NCAA. Ten times more famous than anyone else in college football, reckless enough to get in trouble, but also wealthy enough to defend himself if the NCAA tries to investigate him for anything. If he gets suspended, he’ll instantly become the face of NCAA hypocrisy regarding today’s college sports stars. Either Manziel gets suspended and all the hypocrisy takes center stage, or he keeps playing football this year and extends a middle finger to everyone. We’ll see what happens. Either way, it’ll be fun to watch.

But all of that is just distracting us from the most important questions today.

Manziel autograph price is at a standstill for 2 reasons. 1. His offseason has turned off some general fans, 2. Sheer quantity.

How is there seriously an “autograph market” in 2013? Who is buying ANY OF THIS?

There’s plenty of stupidity to go around when you start talking about the summer of Johnny Manziel, but the autograph craze is in its own class. It was the saddest part of Wright Thompson’s massive ESPN The Magazine feature: “Whenever he’d see his parents, they’d always have a carload of things to autograph. They hated it, and he did too. But they seemed compelled by manners, and obligation, and one autograph didn’t seem like that big a deal.”

And: “The counselor told Johnny to build walls around himself, set boundaries. First, his parents’ autographs should be limited to  half an hour a week.”

It’s been going on all year. As Sports Illustrated’s Stewart Mandel wrote in March (via SB Nation): “It seems the Heisman winner’s biggest challenge is autograph requests — he’s received several thousand of them since December, either in person or arriving in the mail at his or his parents’ house. In fact, Manziel got a cruel initiation during a layover at the Dallas-Forth Worth airport en route to the Home Depot College Football Awards Show in Orlando. A full-uniformed solider approached him with a ‘mountain’ of helmet decals, telling the player he was stationed overseas and wanted to pass out autographs to the fellow soldiers at his base. Manziel gladly obliged. The decals wound up affixed to actual helmets being sold on eBay.”

Seriously. These people are the absolute worst.

I know sometimes people use autographs to raise money for charity. But that’s an exception to the rule. And autographs are great when you’re a kid, don’t get me wrong.

In 1995, I had a baseball signed by Orioles Mike Devereaux and Mark McLemore that was pretty much the coolest thing ever. When you’re 8 years old, an autograph is the holy grail of sports memorabilia. You get the signed ball, or signed hat, or signed helmet, and you just stare at it forever. A real athlete put his name on that for you. Being an 8-year-old sports fan is the greatest.

But once you hit 14, or maybe 16, it’s no longer acceptable to freak out over an autograph from anyone who’s not Barack Obama. Autographs are the old-school version of asking for a retweet, except maybe more pathetic since the request happens in person. They turn grown adults into 8-year-olds.

In general, the only adults who care about chasing autographs look exactly like the creepy memorabilia dealer from Miami who’s the costar of the latest ESPN report.

There has been a lot of moralizing in the wake of the latest Manziel twist, but we just had to stop and note that the most important moral of today’s news is this: Don’t be that creepy guy from Miami.

Don’t be the guy who poses as a soldier to dupe someone into signing a mountain of decals.

And don’t be the sad adult who’s keeping these awful people in business.

Spend that money on tickets, or jerseys, or anything else on earth. In 2013, grown adults chasing autographs might be the only people on earth who might be skeevier and more pathetic than the grown adults running college sports. STOP IT, PEOPLE.

What Clint Dempsey's MLS Return Means for Seattle, Deuce, and the American Way (of Soccer)