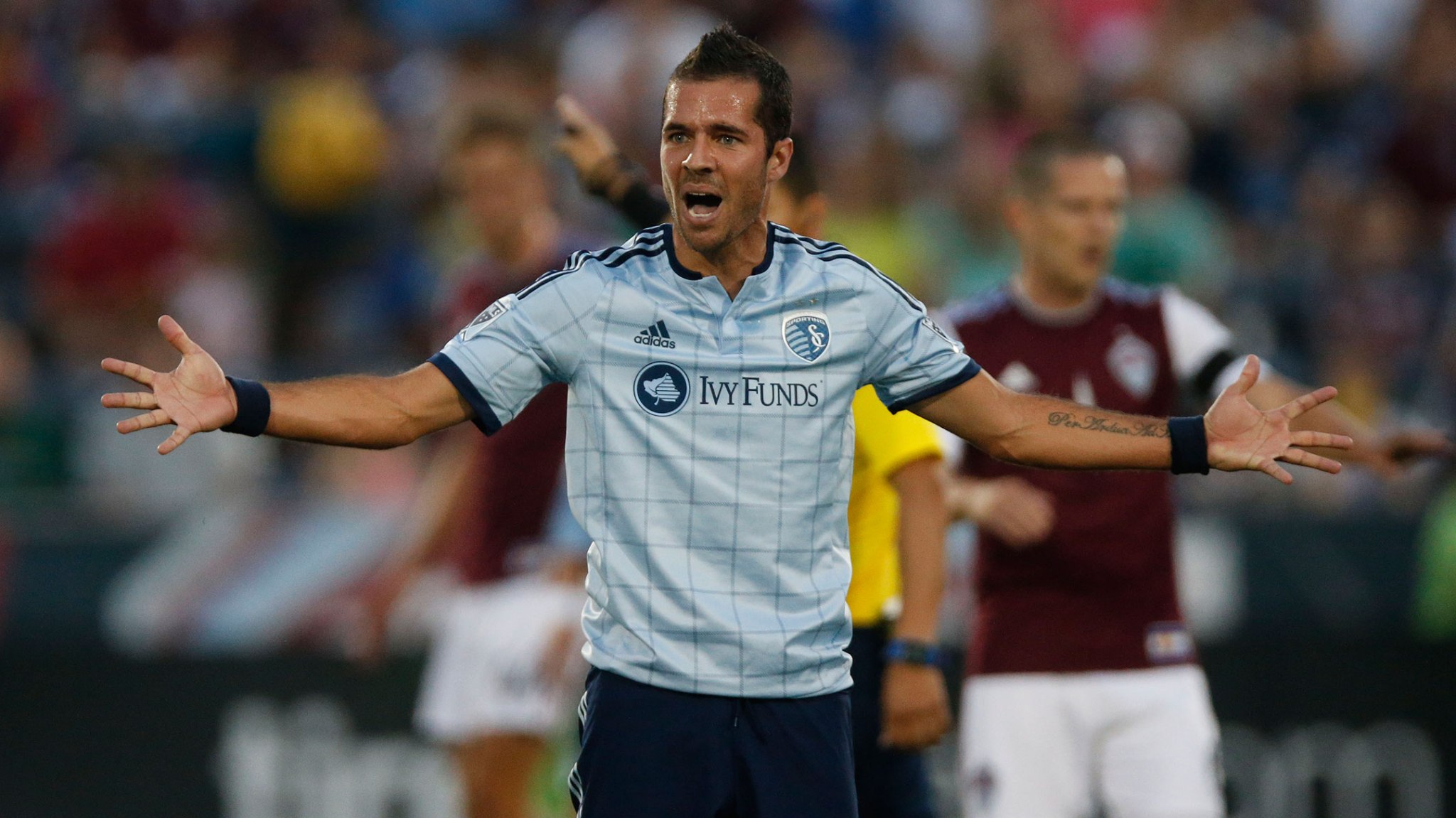 By pretty much any measure, Benny Feilhaber has been the best American midfielder in Major League Soccer this season. He’s tied for second in assists, fourth in chances created, and eighth in key passes per game. His eight goals also rank second among all midfielders. Feilhaber is an attacking force, but we’ve known that for a while now.

What’s perhaps more impressive is that the slight Brazilian-born player, known for his deft touch and exemplary vision rather than his tenacious tackling, has become a defensive whirlwind at the center of Sporting Kansas City’s high-pressure style. His 2.8 tackles per game tie him for 12th in the league, a fraction behind midfield destroyer Kyle Beckerman and almost a tackle per game ahead of United States national teamers Michael Bradley and Mix Diskerud. Add that all up, and you get a player in the thick of the leaguewide MVP race alongside Italian stud Sebastian Giovinco and Irish attacking mainstay (and goofy cartwheeler) Robbie Keane.

You might think all of that would be enough to earn Feilhaber a call to the United States national team. And you wouldn’t be alone. “It’s time to end Feilhaber’s international exile,” “Why Sporting Kansas City’s Benny Feilhaber Deserves a USMNT Call-Up,” and “Why does Jürgen Klinsmann continue to leave out Benny Feilhaber?” are just a few of the headlines you’ll find with the quickest Google search. The YouTube video, “Benny Feilhaber — A message to Jurgen — Highlights,” shows the midfielder laser-ing ball after ball into the back of the net.

Yet, Feilhaber won’t be playing against Brazil tonight. In fact, he says he hasn’t heard from anyone on the USMNT coaching staff since January 2014, when he left the American camp for what increasingly seems like the last time. Feilhaber didn’t make the 2014 World Cup roster. Hell, he wasn’t even on the preliminary 30-man squad. He wasn’t called to any of the numerous camps after the World Cup, when Klinsmann expanded the pool of players. He didn’t make the 2015 Gold Cup roster, which was the most egregious and telling slight. If playing the best soccer of his life wasn’t enough, nothing was going to be. He is, in the eyes of the U.S. staff, a nonentity.

It’s a position Feilhaber has grown to accept. “I don’t think that anything else is coming,” he says. “You put yourself in a position where you don’t expect anything. Obviously, you don’t get as frustrated. You’re not as intensely awaiting an email or a call or whatever it may be. In that sense, I’m definitely more at ease with the fact that if I were to put money on it, I’ll probably never get the call again.”

Given the circumstances — more than 18 months without a call — this is an honest assessment, but it’s also a strange reality. It’s not as though Feilhaber, still only 30, hasn’t shown he can contribute on an international level. In 2007, he won the Gold Cup final against Mexico with this volley, which is on the short list of best U.S. goals of all time.

He played in Europe, he’s started games in the Bundesliga and the Champions League, and he has 41 caps, including three during the 2010 World Cup, where he repeatedly made an impact off the bench. In the round of 16 against Ghana, he set up the USMNT’s only goal with a pass to Clint Dempsey that subsequently saw the attacker dragged down in the box for a penalty kick. Like Dempsey, Feilhaber fits the still-rare profile of the creative American player who, as Bruce Arena put it, “tries shit.”

Plus, it’s not as though the current American staff is unfamiliar with him. He appeared in the 2012, 2013, and 2014 January camps, getting time in three separate friendlies. His club teammates, Graham Zusi and Matt Besler, are national team regulars. And in one of those international-soccer-touches-all-corners moments, Klinsmann’s current right-hand man, Andreas Herzog, tried to recruit Feilhaber, whose grandfather emigrated from Austria to Brazil, to play for the Austrian national team in 2006 before Feilhaber got a shot with the Americans. The midfielder, who moved to the U.S. from Brazil when he was 6, turned Herzog down, preferring to take his shot with the Stars and Stripes. He made it. And now he’s gone, with no call, and, presumably, none forthcoming.

Feilhaber is part of a cadre of players who find themselves in a similar situation: Large sections of the U.S. fan base and members of the media think they deserve a shot, but Klinsmann and his staff don’t seem to agree. It’s guys like Nottingham Forest’s Eric Lichaj, who plays full-back, a position where the Americans are exceptionally thin, and midfielders Dax McCarty and Sacha Kljestan from the New York Red Bulls. Add pre–World Cup Landon Donovan to the list, too.

For whatever reason, Klinsmann doesn’t, to use some empty parlance from British sportswriting, “rate” these players. It’s his team, after all, and he’s the one answering for the decisions he makes.1 Klinsmann clearly feels comfortable with players who fit his mold and not with others who don’t. The coach, sunny personality and all, takes playing for the national team very seriously. It’s easy to see how Feilhaber, who says he plays better when he’s having fun and who spent part of his free time last season filming “The Benny Feilhaber Show,”2 a light-hearted talk show hosted on Sporting Kansas City’s YouTube channel, might not adhere to The Klinsmann Way.

Feilhaber understands. “Unfortunately, it’s not only about the way you’re playing,” he told The Guardian earlier this year. “It’s about what you’ve done in the past. Do you fit the system? Does the coach rate you as a player? There are so many factors.”

The good thing about being a professional soccer player is that the national team is not the be-all and end-all. Feilhaber still has Sporting Kansas City, a team he loves and that desperately needs him if it is going to make a run at MLS Cup. He has his teammates, his wife and young daughter, and a city that adores him. He plays pretty passes in a beautiful stadium and gets paid $350,000 a year to do so. That’s not a bad life, and it’s one that wouldn’t have been possible in MLS as recently as five years ago.

Still, it’s not exactly the one he wanted. “I used to be on the national team,” he says. “I used to play a pretty big role, having played in a World Cup, Confederations Cup, Gold Cup. When you first lose that spot, it’s frustrating. Every single camp, you’re thinking about whether you’re going to get called in, whether you’re going to get the opportunity. It is more frustrating when you don’t. But it’s over four years into Jurgen’s tenure.”

Feilhaber seems to have accepted that his national team career has come to an end, so maybe the rest of us should, too. Being the best American midfielder in America will just have to do.