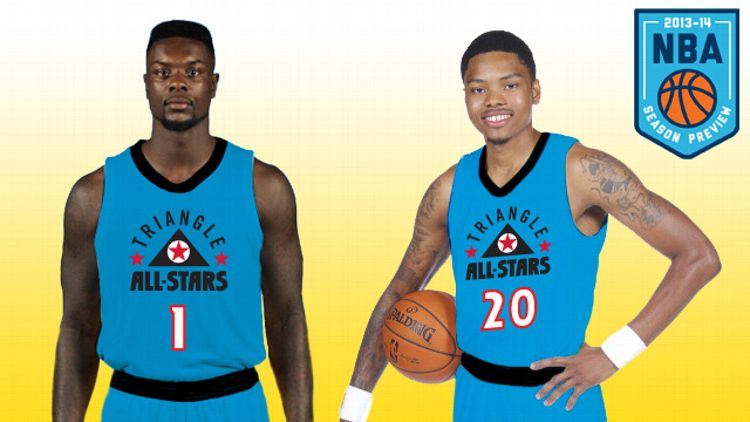 Compiling the Triangle NBA All-Stars offers a way for us to celebrate the players we love way too much. You can see the other entries in the series here. Check out the latest additions, Lance Stephenson and Kent Bazemore, below.

Why We Love Him: If LeBron James is the Patrón of NBA superstars, Lance Stephenson is a bottle of tequila you got for three dollars in Tijuana. Some nights the pull-up jumpers will be air balls and the fouls will be flagrant; others, he’ll drop 25 and shut down D-Wade. Either way: Every night is an adventure when you add a bunch of cheap tequila to the mix.

The no. 1 criteria for this All-Star team is whether you could put a camera on a player all night long and be entertained. Lance? Passes with flying colors.

We wrote about him during last year’s playoffs, and among the many different reasons it’s been fun to watch him in Indiana, the biggest reason was this: Lance was supposed to fail. He was supposed to be a cautionary tale about entitled high school kids hyped too early and prone to laziness. Instead, the guy who personifies New York City basketball better than anyone in the NBA found redemption among Hoosiers, and rather than a cautionary tale, we’ve gotten this nightly fever dream in which Lance Stephenson is a bona fide catalyst who saved his career with hard work and humility. If all that sounds like a horrible cliché, that’s OK, because that’s what really happened.

Every night/week/year it continues, the story gets better. In the meantime, Lance is relentless and relentlessly entertaining. Of course he’s a Triangle All-Star.

Why Some People Don’t Love Him: Opponents and opposing fans don’t love him because he’s currently wearing the Bruce Bowen crown as the most obnoxious defender in the NBA. He will play dirty, he will talk shit, he is not actually that talented, but there’s never any doubt that he thinks he’s the best player on the floor. Shockingly, a player fitting that description occasionally rubs people the wrong way.

Anecdote That Only Makes Us Love Him More: Three submissions here.

1. Pacers announcer Mark Boyle: “We’ve had some guys here in the ’90s that were older-school guys who would have snapped him in half by now. I’m surprised that he’s still in one piece. He agitates his own teammates during practices. Not that it’s that bad. But day after day for six months, I imagine it gets on your nerves.”

2. Larry Bird is his mentor: “He gave me the confidence to feel like I could play in this league. We text all the time. And I just want to thank him, because he’s a legend, and when he tells you that you can do something, it gives you the confidence.”

3. Lance has a brother named Lantz.

Video or GIF Evidence of His Supremacy: Someone scrape Tony Parker off the floor.

Final Word/2013-14 Projection: He came out of nowhere last year to keep the Pacers clicking after Danny Granger went down, made an even bigger impact in the playoffs, and now we’re in year two. Granger’s healthy this year, so Lance may be coming off the bench in Indy this season, and his role will change. As NBA.com notes, he’ll add a “WHOA!” to the Pacers’ bench woes.

Big picture? The Pacers aren’t underdogs anymore, and Lance isn’t a surprise anymore. While the Pacers eye the Heat and Bulls all season long, Lance is in a contract year, and it’s time for both to prove themselves for real this year. Which reminds us: If you don’t trust the Triangle’s endorsements, then take it from Larry Bird: “We’re going to do whatever we can to keep the young man. He’s worked as hard as anybody has ever worked here and you’ll see it on the court.”

Whatever it is changes from night to night with Lance Stephenson, but you’ll definitely see it on the court all season, and that’s a good thing. Who’s up for tequila shots?

Why We Love Him: So far, the Triangle All-Stars has two electric point guards, a temperamental 4, a pair of board-certified, 7-foot Dr. Dunkensteins, a dead-eyed sniper, a wild card (LANCE), and Neon Jesus. Now we have our cheerleader.

Actually, calling Kent Bazemore a cheerleader isn’t quite right. Nothing against the Lyla Garritys of the world, but Bazed God is more than a cheerleader. He is a reservoir of quan. Just look at the master at work:

There are rules to this shit. You can’t just pump your fist or fall down out of your chair. You have to know when to do the dice roll and when to do a military salute. Do you know when to make Popeye arm muscles? Do you know when to hold your arm aloft, like Lady Liberty, waiting for a 3-pointer to go splash? No, you don’t. Because if you did, you would be the greatest 12th man in the history of basketball. You would be Kent Bazemore. Instead, you are you.

Last season, Bazemore’s teammate Jarrett Jack said, “It takes a strong type of individual to not play but still have that type of enthusiasm … He does what he can to contribute to the team, and it’s appreciated.” You know what else is appreciated? Picasso’s Guernica. And Bazemore, in his own way, is an artist.

“At first, (teammates) were like, ‘Look, sit down. You’re doing too much over there.’ But I just kept doing it and then all of a sudden you have Carl Landry and Draymond Green getting up and into it … Richard Jefferson [EMPHASIS MINE, BECAUSE R-JEFF WILL ALWAYS BE THE WORST] was probably the only person who didn’t really buy into the whole thing, but everybody else — D-Lee (David Lee) and Steph (Curry) — whenever we were getting minutes and they were on the sideline they would do it. … They love it now, and it’s blowing up.”

The only problem is that Kent Bazemore might be too good to be on the end of the bench anymore. He put up 18 points per game in Summer League, leading the Dubs to the championship out in Vegas. He will probably grow out of his role as superfan, but for now, there’s always a place for him at the end of our bench.

Why Some People Don’t: Either they hate over-celebrating or they are members of the Blake Griffin fan club.

Anecdote That Only Makes Us Love Him More:

(via CJZero and Ball Don’t Lie)

After being ranked as the 499th-best player in the NBA by ESPN last season, Bazemore got 499 stitched into his sneakers.

This is Bazemore hugging his Summer League trophy. Come on. How could you not want this dude on your team?

Final Word/2013-14 Prediction: With the arrival of Andre Iguodunka to the Bay, Bazemore will have to take his celebration game to a whole new level. We cannot wait to see what he has in store for us in terms of celebrations. But we’re also pretty pumped to see a little more of him on the floor.