Solving the Centerback Conundrum: Does the USMNT Need a Leader? 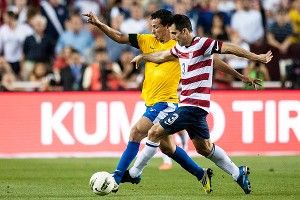 In 2012, United States national team captain Carlos Bocanegra and relative newcomer Geoff Cameron started nine matches each at centerback. Clarence Goodson figured in Jurgen Klinsmann’s first XI six times. A duo made from that trio started 10 of the team’s 15 games, including all six World Cup qualifiers and the last five fixtures of the calendar year. But none of the combinations were without fault, and the pairing is an ongoing concern for the coaching staff (and, certainly, the rabid American fan base).

First thing first: Even the best centerback tandems in the world need time to develop together. It’s impossible to step out on to the field and immediately mesh. Cameron, who had the best year of the three, is also the newest member of the trio. Nine of his 11 caps came in 2012. He was getting used to the international game on the fly and getting used to his American counterparts at the same time. Right now, Cameron is the only sure starter — and even that statement comes more from need than anything — with Bocanegra returning from injury, Goodson’s play having fallen off, and none of the other prospects like Omar Gonzalez or Matt Besler jumping to grab a spot. (Yet, at least.)

Assuming Captain America Bocanegra can return soon from a hamstring tear he suffered in Russia, he’s the favorite to slide in next to the Stoke City defender when the Americans take the field in Honduras on February 6 to start the final round of World Cup qualifying. But that duo only played four games together in the past 12 months, hardly enough time to really get acquainted. “That’s a partnership that has to grow and grow and grow,” Tim Howard says of the relationship. “That doesn’t happen overnight. It happens over many, many years and many, many games. That has to keep getting better and better.” It will, but it takes time.

Another issue is the lack of a vocal leader in the backline, someone who can scream and yell and organize the defense when the best-laid plans go to hell. None of the three are the in-your-face type of player, nor are their potential replacements. The days of Jay DeMerit taking control are gone, and they aren’t coming back. “It’s not an easy thing to do,” Howard says. “It’s either natural or it’s not. Jay had it. That was Jay’s personality. That was one of Jay’s strong traits. He’s outgoing, confident in his ability to communicate, organize, and lead. It’s not an easy thing to do, and it’s something that we have to continue to get better at.”

But does a team really need that type of fiery personality, the traditional leader in the back? I asked Alexi Lalas, the fiery — and not just because of his trademark red hair — former central defender, who paired for years with the quieter Marcelo Balboa in a successful defending duo. “There’s the traditional classic type of screaming, leading, prodding, bullying type of defender that we often revere and hold up as the model, but I don’t think that you have to have that to be effective and to lead,” he says. Bocanegra, et al., fit into the latter mold. These players can work, but of course, “you hedge your bets with [a fiery guy], though,” Lalas adds, laughing.

If you watch the Americans play, you’ll no doubt see Howard admonishing or applauding his defense, trying to keep it organized. But there’s only so much the veteran Everton goalkeeper can do. He’s working to keep the entire team in shape, to see the whole picture. The back four needs its own leader; think the goaltender’s “macro” to the defenders’ “micro.”

In addition to helping adjust spacing and positioning, vocal players play another role, as well. Often, it’s not the content of their words that matters, but the simple existence of them. “I think you have to talk for 90 minutes. Something always has to be coming out of your mouth,” Howard says. “It doesn’t have to be positive or negative. It can be as obvious as ‘the sun is shining,’ but it needs to be a constant flow of communication that keeps everybody on their toes.”

Lalas, now an analyst for ESPN, agrees. One of the hardest parts of a soccer game — especially for backliners — is staying in the present. Frequently, the ball is seemingly out of danger, 40, 50, or 60 yards away. And yet, a few seconds of letting the mind wander can change everything. “As defenders, so much of our existence is trying to stay focused, trying to not [let] that one momentary lapse affect us and, ultimately, affect the game,” the 96-capped player says. “It’s easy to zone out or to get into a lull. Talking helps you individually stay in the game and helps you keep others in the game.”

Now, let’s talk solutions. The good part is that Klinsmann has a number of potential options. In addition to Cameron, Bocanegra, and Goodson, three players — A.J. DeLaGarza, Oguchi Onyewu, and Maurice Edu — saw time at centerback in 2012. Each one showed flashes of being able to compete internationally. More promising, however, are Besler and Gonzalez, the 2012 MLS Defender of the Year and 2012 MLS Cup MVP, respectively, currently in the traditional January camp. The coach expects both men to show they belong, especially the Los Angeles Galaxy defender. “We want him to understand that there’s another level waiting for him, that he has to work for that level and that he has to develop a confidence and personality to get to the international level. We are curious — you know, there is no pressure on him. We help in that process,” Klinsmann said.

Part of that process will be learning to organize and express himself vocally on the field. The skill comes naturally to a player like DeMerit, but reserved players can improve. “I think there is an element of it being innate, but I do think that you can get better at it, recognizing what works and what doesn’t,” Lalas says. “You have to be able to do something and say something when there’s chaos and disarray. You have to be able to get your point across.”

Lalas continues: “If you are going to be a vocal leader, you have got to be a man manager and recognize which players need which type of vocal leadership at which time. You have to be able to pat them on the back and kick them in the butt with equal measure in certain situations.” Klinsmann started the traditional three-week camp with a string of days dedicated to fitness, including sessions about proper diet. Perhaps he should’ve thrown in a course or two on the art of communication, as well.

The Catfishing of Manti Te'o and the Complications of Online Affairs