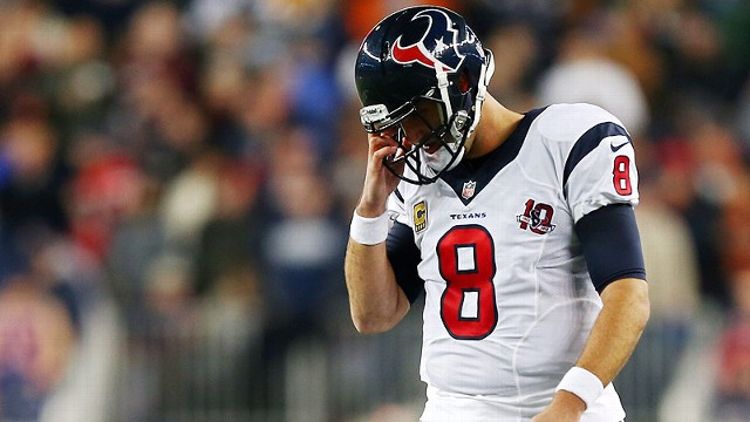 The thought had lingered all weekend — for the past couple weekends, actually — but it took Matt Schaub’s trip to Foxborough for it to take hold. Houston had just completed another seven-yard pass on a third-and-8, and as it became clear that the Texans’ tailspin would end with nothing more than a death rattle, I wondered whether this was it for Matt Schaub.

This doesn’t mean I think Schaub’s time in Houston is over. Matt Schaub will be the Texans’ starting quarterback next season, and he probably should be. In every season in which Matt Schaub started 16 games, he’s thrown for 4,000 yards. He’s been to the Pro Bowl twice, the most recent trip being just last season. In the world, there are probably 15 men better than Matt Schaub at what Matt Schaub does. The problem for the Texans, and the problem for a handful of teams around the league, is that Matt Schaub’s competence may actually be their undoing.

The notion that great quarterback play is a necessary part of winning Super Bowls is not new. In the past 10 years, only one guy not named Rodgers, Manning, Brady, Roethlisberger, or Brees has won. What’s changed this season is what type of quarterback is capable of reaching that status. Where excellence used to be defined by pocket passers dissecting a defense, the past 19 weeks have signaled a shift in what type of player provides the necessary standard for winning.

People have written about this shift better than I can, but what I’m concerned about isn’t how it’s come about or why, but rather what it means for the teams who now fall into the middle. It used to be that only a handful of quarterbacks could control games and a franchise’s destiny all on their own. When there are only five or six to be had, being a team without one was understandable. Now, there are game-changing quarterbacks coming from two different directions. What’s happened in Washington, Seattle, and San Francisco has given a different perspective on what type of quarterback a team can use to win.

As I see it, the quarterback haves and have-nots looks something like this:

Many of the traditionally great quarterbacks on that list (Brady, Peyton, Brees, Rodgers) are unassailable, but I would argue that even those who aren’t on their level probably still fit the description. Eli and Roethlisberger have done it enough to warrant inclusion, and Andrew Luck seems primed to be the player most figured he would be. The two who might deserve a bit of skepticism are the two who have been intertwined for their entire careers: Matt Ryan and Joe Flacco. It’s likely that this weekend will play a role in people’s arguments for their belonging in this category, but at this point, I’m willing to say that Ryan definitely belongs, where Flacco still has some work to do. While he’s capable of performances like the one in Denver last week, he’s also capable of the one in Houston earlier this season, and the contract extension he’s almost sure to get this winter could easily make him the perfect example of quarterback toiling.

The other group (Redskins, Seahawks, Panthers, and 49ers) consists of the pass-run, read-option types that have proven so valuable in the past two seasons. Cam Newton had his issues this year, but I think that his second half is enough reason to still consider him a member of this group. The point here is that all four of these teams feel like they not only have sustainability at quarterback, but they have a player who can take over games.

On the other end, there are the teams that have no doubt they have to reevaluate their quarterback situation, and I feel like each of the ones mentioned fit. The rest are teams that have quarterbacks with only one full season as a starter and need at least another year before we can say anything.

This leaves us with eight teams that fall somewhere in between, and the first question to be asked is probably whether those eight teams actually belong there. I would say that at this point, the best arguments to be made are for Tony Romo, Jay Cutler, and Matthew Stafford. Romo has played at an elite level for much of his career, Cutler has shown plenty of flashes, and Stafford deserves a little more time. But the difference between Romo (or Philip Rivers) and, say, Matt Ryan, is that I’m not sure many Cowboys and Chargers fans would be tearing the walls if news broke tomorrow that either was shipped out of town. That can’t be said for folks in Atlanta.

For me, the best two examples of this issue are Schaub and Andy Dalton, and it’s because of where both sit in their careers. The obligation to keep Schaub is that he’s shown he’s capable of performing at a high level. He’s done it several times over the years, and for Houston, that body of work is enough to keep handing him the keys. With Dalton, it’s partly about what he’s already shown, but more about the promise of what he might be. My argument is that two years in, we probably already know. The notion that quarterbacks can’t play as rookies and follow a steady improvement process over a handful of seasons doesn’t seem to apply in today’s NFL. We know earlier and with more certainty where quarterbacks are going to end up.

For Dalton and the Bengals, this becomes problematic. Dalton is an above-average quarterback who, if anything, has outperformed expectations in his two seasons. The problem is that this is likely all he’ll ever be. Having one of these quarterbacks is akin to the treadmill of mediocrity in the NBA. In some respects, being a team that gets the 4- or 5-seed in a conference every year. People are likely to fill the seats, and coaches are likely to keep their jobs, but if the ultimate goal is winning a championship, then what are we really doing here? For teams like Cincinnati and Houston, it should become about finding the NFL equivalent to bottoming out, and the blueprint might be found in two teams that could have ended up stuck in a similar situation.

Last season, the San Francisco 49ers were probably the best example for this entire argument. Alex Smith had finally developed into an average quarterback, and the franchise surrounded him with excellence in every other facet of the team. Like the 2003 Bucs and the 2000 Ravens before them, the idea was that the path to a championship with unspectacular quarterback play is being great everywhere else. In the early part of this season, it looked as if San Francisco was content to head down this road again.

With the signing of Matt Flynn, it’s easy to imagine this year’s Seahawks in a similar situation. It’s hard to imagine Matt Flynn, at his pinnacle, as anything other than a good-but-not-great quarterback. The Seahawks would have likely leaned on their defense and running game as they sat on the border of being a playoff team.

Luckily for both, those scenarios never played out. Russell Wilson and Colin Kaepernick both emerged as the quarterbacks each organization was hoping for and, possibly, the answer for teams stuck in the quarterback middle — taking routine flyers on athletic quarterbacks. Obviously, there’s value in every draft pick, and spending a second-rounder on a quarterback every year probably isn’t the path to building a winner. But every team in the league could have had Colin Kaepernick and Russell Wilson. With Wilson, they could have had him twice. What San Francisco and Seattle saw (maybe) was hidden value that others did not.

Kaepernick wasn’t a quality thrower during his time at Nevada, but there was enough there for Harbaugh and his staff to believe he could become one. College football is full of fast, athletic quarterbacks, and for teams in the middle, it might be a matter of discovering which ones are just in need of some polish. What’s clear is that for teams like Houston, it can’t keep going like this. As football changes, teams have to follow along, and what’s happened in Seattle and San Francisco may be the first step.

The Catfishing of Manti Te'o and the Complications of Online Affairs

Heads Up, America: Kevin Durant Is Having One of the Greatest Offensive Seasons Ever