Heads Up, America: Kevin Durant Is Having One of the Greatest Offensive Seasons Ever 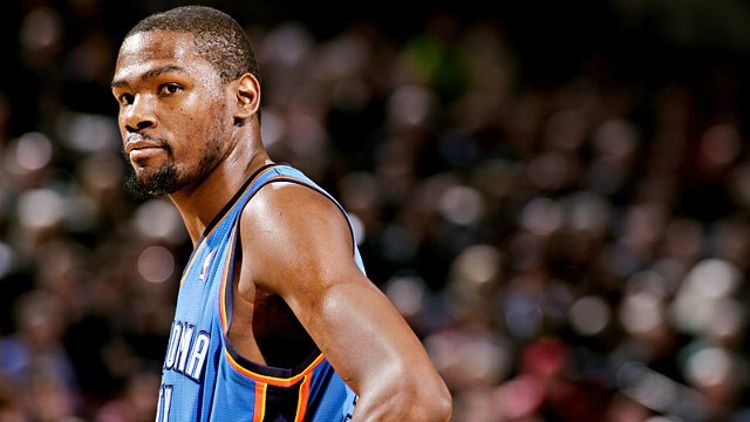 When I gave last night’s Thunder-Nuggets game one of my coveted DVR slots, I knew I was probably recording a schedule loss. Denver was on the second night of a back-to-back, having traveled from Denver to OKC after an overtime win over Portland. Oklahoma City was coming off a rest day, and Serge Ibaka was back in the lineup after missing two games with a chest contusion.

Still: Games between these teams have massive entertainment potential, and there is some chippiness dating to an underrated first-round series — a five-game OKC win — in 2011.

Oklahoma City indeed blew away Denver with terrifying ease — transition buckets, enough offensive rebounds to push George Karl into using his two-center lineup, a festival of Russell Westbrook jumpers, and Kevin Durant being mean for a bit before doing some distributing. Durant is mean every night, but Westbrook’s shooting has been a bit of a wild card. His shooting numbers are slowly trending the right way after a horrid start, but he’s still at about 35 percent on mid-range shots after hitting about 41 percent last season, per NBA.com. The Thunder are so good at this point, on both ends of the floor, that on nights Westbrook makes even half his jumpers, the other team may as well forfeit.

I’ve looked at OKC’s offense in depth a couple of times already, so suffice it to say for now the same stuff is still happening: Westbrook and Durant have both improved as passers; the team gets to the line more often per shot attempt than everyone but the Lakers; Serge Ibaka keeps getting better as a threat from the post, on the pick-and-roll and the pick-and-pop; Kevin Martin, recent cold streak aside, works as dynamite spot-up guy; and the combination of the above-mentioned improvements among Oklahoma City’s three franchise stars has allowed for a healthier balance in shot types.

The Thunder last season were overly dependent on pick-and-roll plays in which the ball handler finished the play via a shot, turnover, or drawn foul. This season, those pick-and-rolls (and other plays) are leading to more varied outcomes — more shots for Ibaka all over the place, more spot-up jumpers and more assisted baskets overall. Assist rate can be an overrated stat taken out of context. The Wizards have a very nice assist rate, while the Knicks are in dead last by a mile, and you can probably guess where their respective offenses rank overall. The Thunder last season had the league’s second-best offense despite ranking last in assist rate, but a ranking at that extreme, with this kind of on-ball talent on hand, justifiably raised some alarms. The Thunder, as good as they were, could have been better.

Now they are, and they are on pace to finish as one of the greatest offenses in modern NBA history. Factoring in last night’s blowout, Oklahoma City’s top-ranked offense has now scored 7.6 more points per 100 possessions than the league has averaged overall, per Basketball-Reference. (Note: I normally use NBA.com’s numbers, but the league database does not list an overall league-wide average.) Since the league added the 3-point shot, only six teams have outperformed the league’s average offensive output per 100 possessions by that much — and three of those did so by 7.7 points per 100 possessions, just a hair better than what OKC is doing now. Here’s the list:

The 2004 Mavs will be tough to catch, but the 2004 Suns could be in reach, meaning it’s not out of the realm of possibility Oklahoma City finishes the season with the second-best offense in modern league history. (Note: This is obviously just one quick-and-dirty way to measure “best.” A few of these teams finished with higher raw points-per-possession numbers than Oklahoma City’s current figure, only they played in more prolific scoring eras. Overall scoring so far this season is only about one point per 100 possessions over where it finished in last year’s lockout season, and about two points below where it was in the two seasons before the lockout. The league’s overall scoring rate should tick up as the season goes on, since offense generally improves over the full 82. But the league’s free throw rate continues to fall every season, with the league on pace to set a new record low this season in trips to the line per shot attempt.)

Durant is obviously the main catalyst here. He’s not just on pace to join the 50/40/90 club; he’s on pace to put himself in the conversation — and perhaps atop it — for “greatest shooting season in the entire history of this sport.” As I’ve mentioned before, only seven players have pulled 50/40/90 over a full season, and they’ve done it in 11 seasons between them; only Larry Bird (twice) and Steve Nash (four times) have done it more than once. Durant right now is shooting 52.5 percent from the floor overall; among 50/40/90 members, only Bird (52.7 percent and 52.5 percent, respectively, in his two seasons) and Mark Price (52.6 percent) have equaled or topped that.

Basically: If you’re looking for the greatest shooting seasons ever, these three 50/40/90 seasons are a good starting point:

Again: You could define “greatest” in other ways if you’d like. Michael Jordan shooting 54 percent with sky-high usage rates in his prime is pretty nutty, though 3s were not a big part of his game for much of that time. Everything Wilt Chamberlain did was pretty nutty. Steve Nash was typically just over 50 percent in his four campaigns, but he shot proportionally more 3s and had free throw percentages approaching 94 percent (on relatively few attempts, compared to the Nowitzki/Bird/Durant trio).

Bird shot fewer 3s — about three per 36 minutes — but he attempted more 3s by himself in the mid- and late-1980s than two or three teams each season. Context matters. Please don’t call Larry Bird an “overrated shooter” without doing your homework.

Durant has a half season to go, obviously. But appreciate what’s going on here. This is one of the greatest offensive seasons in the history of basketball, and the amazing thing is, he’s still not the best player in the league or the MVP.