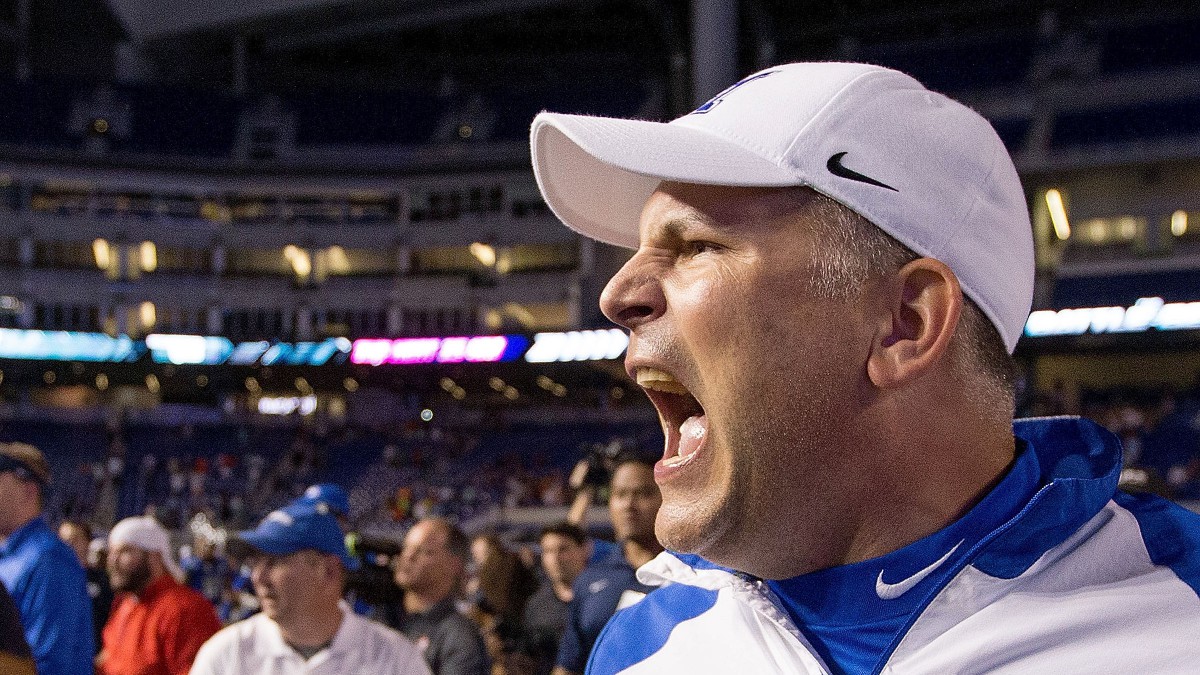 If ever there were a year in which it was possible to finish a college football season with a relatively undercover 10-win record, 2014 was just about ideal. You had the first College Football Playoff and accompanying selection hysteria. You had five major leagues warring for four postseason bracket invitations. You had a conference championship rematch of a regular-season game that swung one team into the playoff semifinal at the Rose Bowl, and another conference championship that refused to exist. You had, at one point, both big league programs in the state of Mississippi tied for third place in the AP poll. And just a little ways to the north, just a little ways off the radar, you had another conference-winning team brewing. In Memphis, of all the unlikeliest places.

Hi, Memphis. Been a while.

A lot of teams could’ve come out of nowhere to win the American Athletic Conference. That’s easy to say, because from year to year, it’s difficult to remember which programs are actually in the American Athletic Conference, a sprawling, amorphous coalition1 born out of the unraptured remainders of the Big East and transplants from Conference USA. But the nowhere from which the Memphis Tigers emerged was particularly desolate, a decade-long span of misfires and misfortune stretching between the current team and the last happy memories in the Motor City Bowl. The last Tigers teams to record back-to-back winning seasons played between 2003 and 2005. The last winning season in Memphis was a tepid 7-6 affair in 2007. Their last bowl appearance came in 2008 and they lost. Before last season, the Tigers hadn’t recorded a conference championship since the 1971 team did it in the Missouri Valley Conference.

So when that team ends the season ranked in the AP Top 25, it’s time to cock an eyebrow toward West Tennessee and wonder how many millimeters of empty space remain between the Tigers’ gas pedal and the floor. Last year’s Memphis team came off a 3-9 2013 record to go 10-3, 7-1 in AAC play — and that’s after winning just one conference game on its first go-round. (Right, there’s also that: 2014 was Memphis’s second season in this league.) The majority of their wins were decisive, their three losses all different degrees of painfully close. They were tied in the fourth quarter with UCLA, lost by four points to Houston, and despite the 24-3 final score, hung in with one of those aforementioned Mississippi teams for most of a game. And they showed they know how to win over unaffiliated third-party fans, capturing the hearts of millions2 by capping their postseason with an on-field postgame melee after beating BYU in the inaugural Miami Beach Bowl. Swoon or harrumph at the outcome all you want; on a purely clinical level you can’t not be impressed with a team that gets that many Mormons to fight at once.

All this transpired under a guy in his first head-coaching job, in the third year of one of the sport’s gnarliest rebuilding gigs. Memphis’s ability to hang on to Justin Fuente after that 2014 run may be the most remarkable aspect of this entire story. As with Mike MacIntyre at San Jose State, that kind of success is not something that just happens. Unlike MacIntyre, Fuente got his team out of the well and stuck around above ground, signing a contract extension in December. This is not to say he’s setting himself up to be a Memphis lifer; Fuente has been refreshingly forthright about his future career path. But whenever he takes off, if he continues along this trajectory, he’ll leave the Tigers light-years ahead of where he found them, and he’ll be leaving for something big.

It’ll be a few months before we can make out the arc of the 2015 Tigers, but the questions hanging around Memphis football now are the “how will Memphis football?” kind of questions, not “why is Memphis football?” questions. How will the team fare without a plethora of last year’s defensive starters and coordinator Barry Odom?3 Will the opportunism of last season’s kicking game hold? Who will take on go-to running back duties in the absence of Brandon Hayes? Where is the ceiling for quarterback Paxton Lynch and after posting a stat line like this, shouldn’t he be playing in the Big 12?

And would you look at that schedule? So much to look forward to, from an all-but-guaranteed Power 5 pelt at Kansas, to a midseason potential revenge rematch with Ole Miss, to the addition of newly-minted division-mate Navy, to a regular-season finale with an SMU team that will have had a full season of Chad Morris’s offensive tutelage. And while a return trip to an identical postseason destination is extremely unlikely, maybe we’ll get to December to find Memphis has planted roots of a new tradition there, and two completely different teams will start their bowl weeks cheering up sick kids in hospitals and scarfing down delicious Cuban food, and end it swinging their helmets at one another on national television. No tradition like a new tradition.