Buffalo Stance: The Case for Colorado 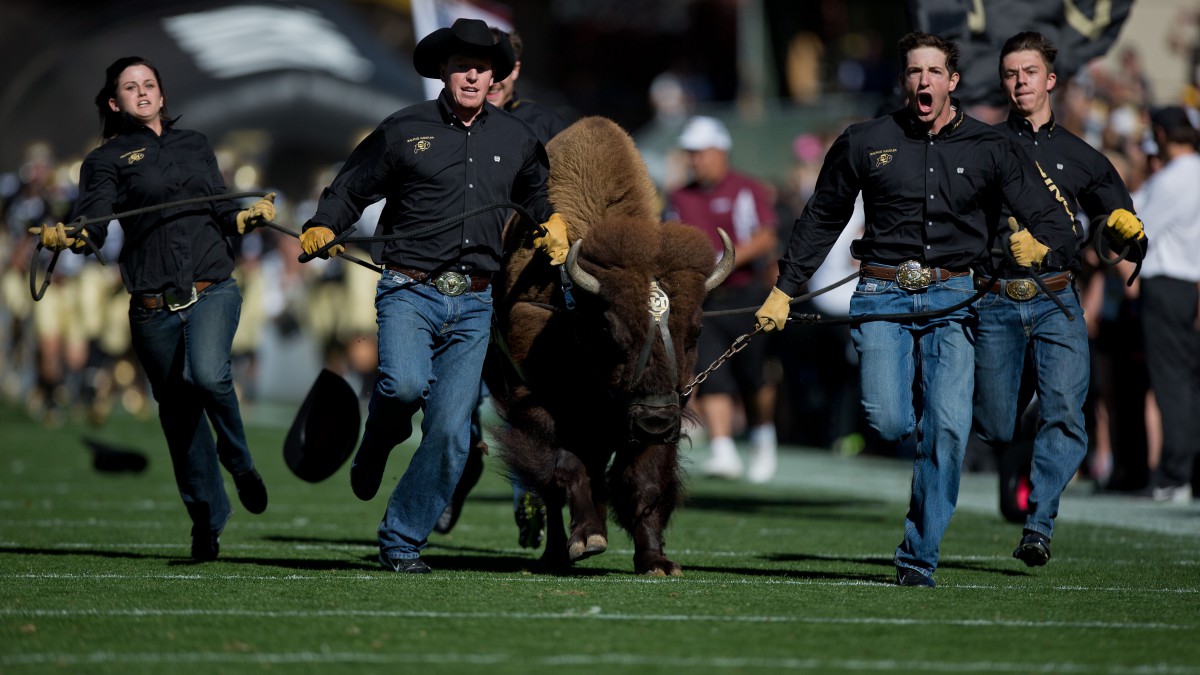 When is it impossible to cheer for a football team that plays in a great college town, in a stadium with stellar views, in games featuring a live buffalo mascot? When it’s recent-vintage Colorado, a team that occasionally has seemed to be working actively to discourage any remaining adherents. The Buffaloes have lately suffered the dual misfortunes of being bad and unlucky, all while eating fumes as they cling to the back of the rocket sled of the ascendant Pac-12. To say third-year head coach Mike MacIntyre inherited bare cupboards in 2013 would be to mistakenly imply that he had cupboards.

But when is a bet on a team that finished the 2014 season at 2-10 a good bet? When it’s the 2015 Colorado Buffaloes, and when you look very, very closely. A team picked to place last in its division in 2015, in a not-particularly-close vote? A program that hasn’t been to a bowl since the 2007 season, hasn’t finished a campaign with a winning record since 2005, hasn’t won a postseason game since the 2004 Houston Bowl? They’re not as far away from respectability as they might appear, and “respectable” is a lofty goal in today’s Pac-12.

The 2014 Buffs were a squad overrun with youth and overrepresented on the injured list. They played hurt, and they played inexperienced, and they played terrible, torchable defense, which is cute in this league only if you can also consistently put up points by the bucketful. They recorded two wins, versus Hawaii and at UMass, and sustained four close losses, to Cal (in double overtime), Oregon State, UCLA (again in double overtime), and Utah. Four more scores on four more Saturdays, and MacIntyre’s tenure in Boulder would look a lot more like his trajectory at San Jose State, where he famously took the Spartans from 1-12 to 5-7 to 11-2 and a top 25 ranking in the space of three seasons. His two Colorado teams have posted records of 4-8 and 2-10. But if there’s a coach you want on the side of your seemingly hopeless campaign, doesn’t this seem like the guy? Mike MacIntyre, I feel I should repeat, won games, FBS football games, at San Jose State. That doesn’t just happen. He’s the son of another coach with a thing for unlikely causes, and he’s hired still another, Jim Leavitt,1 to fashion together some semblance of a defense for his 2015 team. MacIntyre knows from long shots and he’s not one to be unrealistic about his team’s comfy basement residence in the Pac-12 South.

And very quietly, some new kitchen cabinets have begun to assemble and fill themselves. Starting quarterback Sefo Liufau, an honorable mention all-conference selection in 2014, returns for his junior season, as do his top two receiving targets from last year, including 2014 Biletnikoff semifinalist Nelson Spruce. Both lines are still quite young, but there’s incoming playmaking potential on the D-line. And the first year of a defensive unit under a new coordinator, given the presence of Leavitt, sounds infinitely preferable to last season’s 39 points allowed per game.

Maybe most crucially, Colorado has a September schedule that will permit the Buffs some time to shore up their Buffalo stances. The Buffs open at Hawaii in Week 1, host UMass,2 travel to Denver for their annual neutral-site clash with Colorado State, then welcome Nicholls State, a program that is to the FCS standings what Colorado has been to the FBS. It’s not a cakewalk month; the Warriors are known to be harder to beat at home and the Rams ran away with the contest in the fourth quarter last year. But neither is it October, in which the Buffs play Oregon and both Arizona schools in back-to-back-to-back weeks.

None of this is to say Colorado is about to scale the ranks of an already crowded league. A 10-win, third-year MacIntyre team does not appear on the horizon, but bowl eligibility is back within reach for Colorado, and that’s not insignificant. And if you’re familiar at all with MacIntyre’s work, this is about the time you’ll want to start paying attention. I don’t think this is The Turn, not with a defense that bad starting from scratch under a new coordinator, not playing a Pac-12 South schedule. But it is a turn, and it might be more important for what it represents than for what it is: a guy making incremental progress who’s being allowed to continue inching his way out of a well, who’s not having his leash yanked by his athletic department. There might not be another league right now where significant improvements can be so invisible to the naked eye, so outshone by the rest of the competition, but the Buffs have the right staff, talent upgrades en route, and new facilities coming online.3 How often, in this coaching climate, do you get to see a guy with the administrative support and the teaching chops try to pull something like this off? Even at the bottom of a mountain, there’s something to be said for getting over a buffalo-size hump.

Welcome to Extensionville: The NBA’s Next Big-Money Community