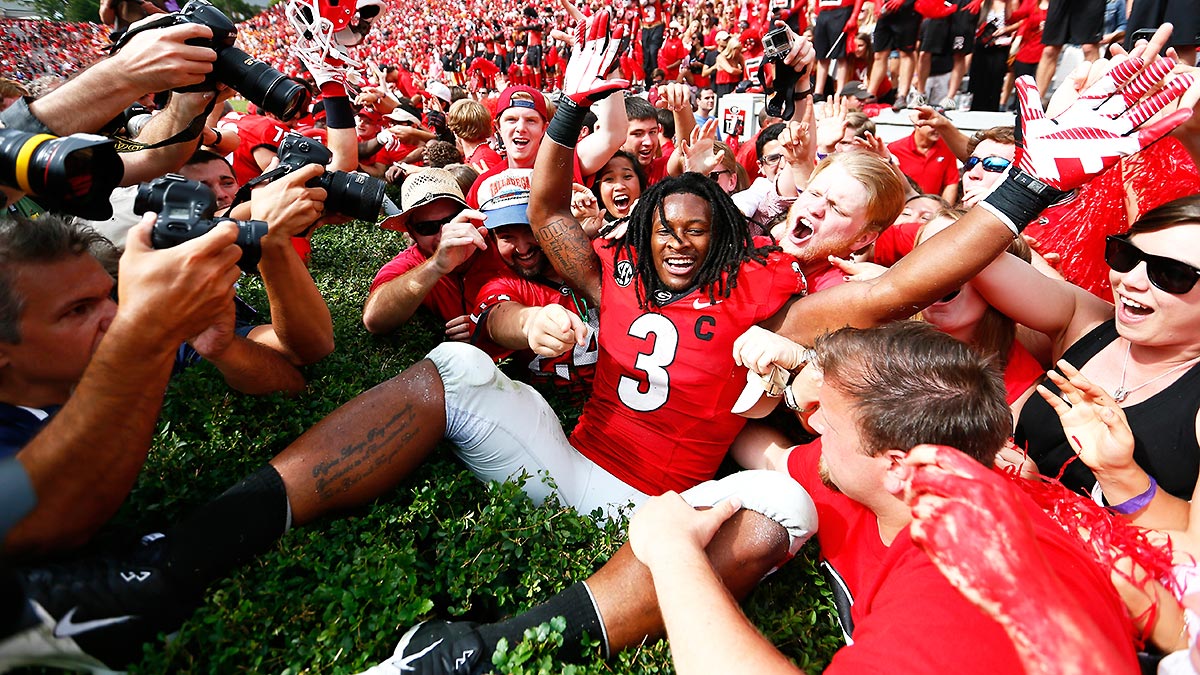 We’ve reached the midseason mark, and as such, we’re breaking from our regular format this week to bring you a complimentary set of halfway Heisman rankings. Enjoy!

After leading the Bulldogs to three straight wins over ranked opponents, Prescott deserves a paid vacation. While he won’t get cash for his services, he will get a bye in Week 8, followed by three conveniently slated matchups against teams of dubious quality: Kentucky, Arkansas, and Tennessee-Martin. That will allow Prescott to basically chill out for a month before a pair of high-stakes tilts at Alabama and Ole Miss. If all goes well, he’ll have a chance to cement his candidacy in the SEC championship game, much like Cam Newton did in 2010. And yes, I’ve already asked Terrelle Pryor for tattoo parlor recommendations.

The best thing that could have possibly happened to Petty’s campaign was TCU’s upset of Oklahoma, which catapulted the Horned Frogs to no. 9 in the AP poll. As a result, Baylor’s ridiculous 61-58 comeback victory over TCU in Week 7 could qualify as a signature win for Petty, who for some time has been in dire need of a calling card beyond “notorious stat stuffer.” Meanwhile, the Sooners will likely have recovered in the polls by the time they host the Bears on November 8, giving Petty another chance to dissect a highly ranked opponent. He better take full advantage of it, as he’s not enough of a jaw-dropping highlight machine to win the Heisman without his team going undefeated.

In any other year, a home loss to Arizona might have crippled Mariota’s campaign, but in 2014, it was only a minor blow, which has less to do with Oregon’s admittedly impressive rebound performance against UCLA and more to do with the boundless chaos occurring elsewhere. Regardless, the Ducks still control their own destiny in the Pac-12 and thus remain firmly in the College Football Playoff race, and a final four bid would surely curry favor with the Heisman’s postseason-fetishizing voters. (Four of the last six winners have been on teams that played in the national championship game.)

While the Heisman is currently Prescott’s to lose, Mariota has always felt like the safest bet to win, and he could end up receiving the award by default if some of his fellow front-runners suffer late-season swoons. A showdown with Stanford looms large next month, and Mariota will have to survive behind an awfully porous offensive line, but hey, he’s only the country’s most polished quarterback.

Putting Gordon in the same offense as quarterbacks Tanner McEvoy and Joel Stave is like giving Jimmie Johnson the keys to a Honda Civic and asking him to win a NASCAR race. It’s a minor miracle that Gordon is averaging 7.9 yards per carry and has already eclipsed 1,000 rushing yards on the season, considering that opposing defenses can pretty much disregard Wisconsin’s passing game entirely. When the Badgers face Maryland���s 102nd-ranked defense next week, Gordon might shatter single-game rushing records that we didn’t even know existed. He may not win the Heisman, but he’s got the season’s most astonishing stat line locked up.

Shhh, don’t jinx it. That 15:6 touchdown-interception ratio can’t last forever, and there’s no way he’ll continue to run the ball like he did against Bama and A&M. No way. And outdueling Prescott in the Egg Bowl? To quote the man himself, GET REAL.

(He def got arrested last night.)

Golson occupies a strange, liminal space in the Heisman race: He’s technically a contender, but his candidacy won’t feel legitimate unless he performs well in Tallahassee on Saturday night. Doing so will require him to seriously cut down on the turnovers; he’s committed a deplorable nine of them over the past three weeks, and while none of them has been particularly costly, you better believe that Florida State’s defense will capitalize on any gift-wrapped passes sent its way. However, if Golson protects the football and the Irish win, he’ll immediately be considered a front-runner, and don’t discount the importance of playing for a flagship program like Notre Dame, especially since his main competition plays for Mississippi State and Baylor.

Nebraska’s Week 6 meeting with Michigan State was supposed to be a worldwide showcase for Abdullah, but all he could muster against Sparty was an ignominious 45 yards on 24 carries. He’ll need to radically outperform Gordon when the Huskers visit Wisconsin on November 15 to save his campaign.

That is, if he even finishes the season with the Noles.

As it turns out, L.A.’s best running back isn’t a converted linebacker. Also, he plays in the Coliseum.

Allen single-handedly beat Arizona on Saturday, and he would have single-handedly beaten Arizona State the week before if not for his defense’s refusal to contest a Hail Mary. Nevertheless, he’s the primary reason why USC sits atop the Pac-12 South, and he’s poised to dominate the dregs of the conference over the next few weeks. As such, expect his sleeper Heisman campaign to go mainstream in the very near future.

We’re giving him this spot for two reasons:

1. He was the best player in college football through the first half of the season, so it would feel wrong not to include him here, especially considering the relative insignificance of his offense.

2. There’s a small chance that he’ll play again this season. (Yes, we are grasping at a LOT of straws.)

Of course, even if his suspension is lifted, Gurley’s campaign is very likely toast. So, why hasn’t anyone mashed up his highlight reel with Sarah McLachlan’s “I Will Remember You” yet? That would easily be the only positive development to come from this situation.