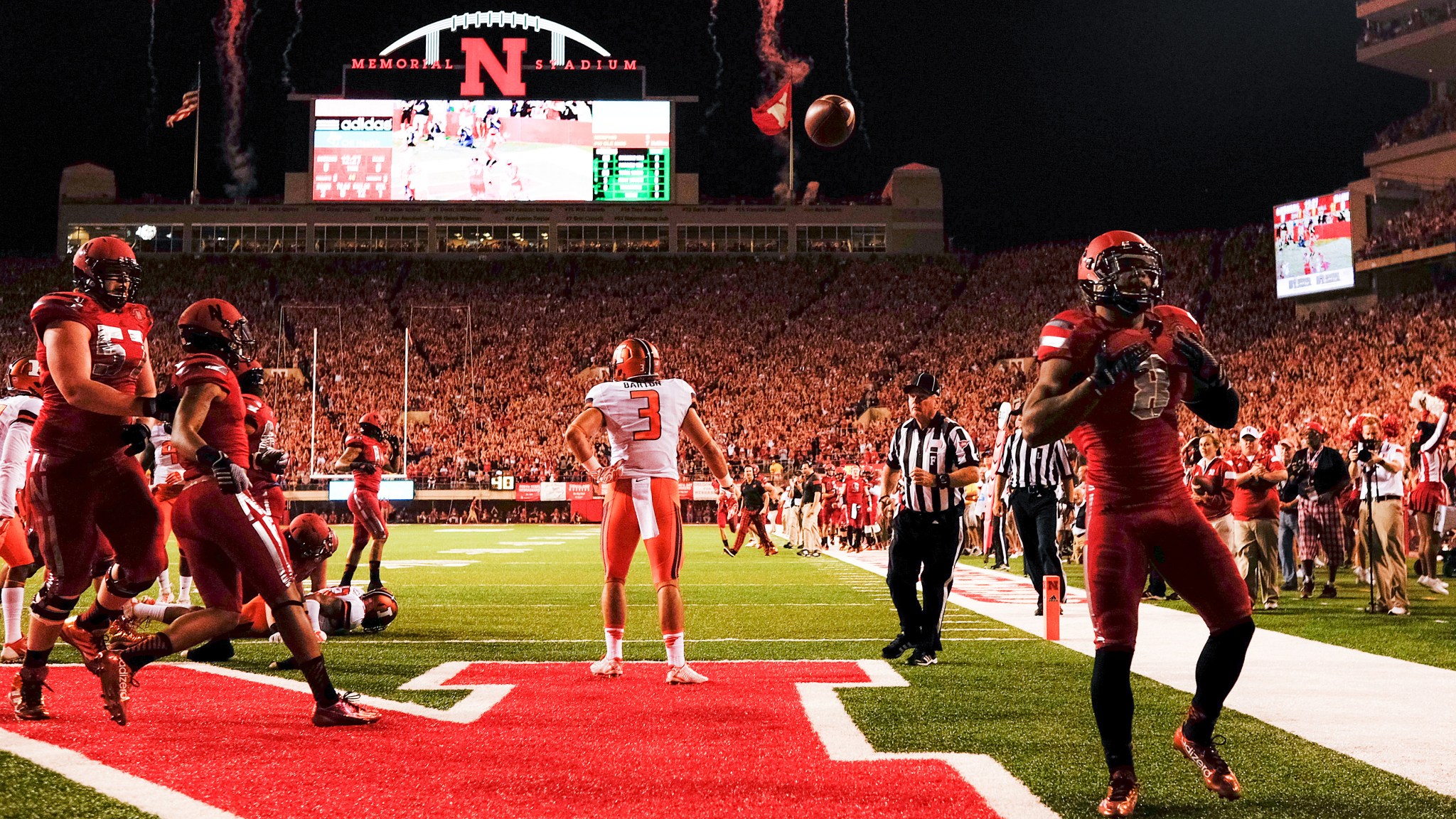 If it feels like an astonishing new Abdullah highlight reel drops every week, that’s because it does.

At one point, playing running back at Nebraska was a shortcut to Heisman consideration. Apparently, this is no longer the case, as evidenced by Abdullah being far from a clear-cut favorite. While some of the arguments leveled against him are fair — yes, Todd Gurley could probably rush for 500 yards on McNeese State, something Abdullah failed to do — he’ll have the chance to silence any and all remaining doubters/critics/agnostics/etc. at no. 10 Michigan State this weekend. If Abdullah can tear it up against Pat Narduzzi’s stingy defense, he’ll deserve to be the Heisman’s one true front-runner. If he doesn’t, then we can return our focus to Melvin Gordon, as there’s room for only one red-and-white-wearing Big Ten running back in this conversation.

Hundley’s early-season slide, which included an injury to his non-throwing elbow, conveniently dovetailed with the easiest portion of UCLA’s schedule. The importance of this really cannot be overstated, as it allowed UCLA to squeak out wins against the likes of Virginia, Memphis, and Texas, thus keeping Hundley’s Heisman hopes alive.

Then, on Thursday night, the Bruins woke up from their extended hibernation and released a month’s worth of frustration on no. 15 Arizona State. Hundley was flawless in the 62-27 blowout, accruing 355 yards and four touchdowns through the air, and 72 yards and a score on the ground. He’s firmly back in the Heisman race … at least until UCLA hosts Oregon on October 11. This may prove to be Hundley’s only chance to leapfrog Marcus Mariota in the hearts and minds of voters, so you best believe he’s studying B.J. Denker tape from last year.

Tribute bands exist to capitalize on the public’s undying fascination with dated musical acts. On Saturday night, Golson played lead guitar in the Tommy Rees tribute band, Touchdown Reesus. Golson threw two interceptions and lost two fumbles in a performance that exquisitely captured the essence of his predecessor. In true Reesian fashion, Golson’s night wasn’t without its highlights — he did complete a ridiculous 25 consecutive passes, four of which went for touchdowns — but the turnover fest overshadowed everything else. Cue DERANGED BRIAN KELLY: 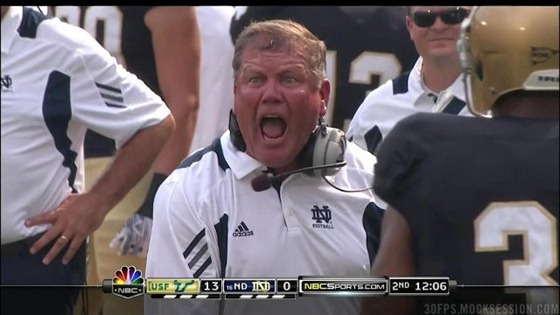 Fortunately for Golson, Notre Dame happened to be playing Syracuse, so the game was never really in doubt. But just as the Irish fell in the AP poll (despite coming away with a win), Golson’s Heisman campaign will suffer a bit — voters have standards, especially regarding the Orange. Of course, all will be forgiven if Golson is effective against Stanford’s top-ranked defense this weekend, and an upset over Florida State would likely make him a front-runner, provided that the overrated Seminoles are still undefeated in two weeks.

For now, though, Golson is lagging behind BYU’s Taysom Hill when it comes to quarterbacks at independent religious institutions, and that’s a problem.

Pour one out for Conner’s fringe Heisman candidacy. It’s on life support after the sophomore was corralled by Akron on Saturday. OK, that’s an understatement: James Conner as we knew him is dead. Long live James Conner. Cherish the positive memories, and try to forget the part about him being outfoxed by Terry Bowden’s ragtag band of misfits.

Where were you when Brissett nearly entered the Heisman discussion on Saturday? (Think about this long and hard, as your future grandchildren will undoubtedly request details.) I bet Will Muschamp was busy slamming his head on a boulder, and no, not because that’s his bye week ritual of choice (although it probably is) — the thought of Jeff Driskel’s former backup shredding Florida State’s defense must’ve been nigh unbearable.

Alas, Brissett’s best efforts (32 completions for 359 yards and three touchdowns) weren’t enough to lead the Wolfpack to victory. But he still warrants a mention here, if only to memorialize his brief flirtation with greatness. Had North Carolina State won, it’s easy to imagine Brissett as a legitimate Heisman dark horse; now we’ll just have to enjoy his inevitable drubbing of Clemson for what it is. In the end, this might not be such a bad thing. After all, hasn’t Muschamp suffered enough?

Feel the magic, people: By this time next week, we could be celebrating the dawn of a new era. I am, of course, referring to Bo Wallace’s ballyhooed Heisman campaign, which kicks off in earnest this weekend against no. 3 Alabama. Or perhaps Blake Sims will just continue to make Lane Kiffin look like a genius — one of these things will surely happen.

Meanwhile, Dak Prescott will verify that his stupendous performance at LSU was not a fluke against Texas A&M, giving Dan Mullen the signature win he so desperately needs to secure the Michigan job; unless, of course, Kenny Hill treats the Bulldogs like they’re from Lamar.

Finally, don’t forget about Auburn and Nick Marshall hosting LSU, which could go in so many different directions that a choose-your-own-adventure novel should be written about it.

Point is, the SEC features a preponderance of Heisman-contending quarterbacks, and as long as their teams stay undefeated, it’s hard for any real separation to occur. Now it’s time to sort out the logjam, with head-to-head matchups that allow for significant advancement in the Heisman race.

Keep It Simple, Teddy: How the Vikings Should Handle Their Rookie QB’s Success