Keep It Simple, Teddy: How the Vikings Should Handle Their Rookie QB’s Success 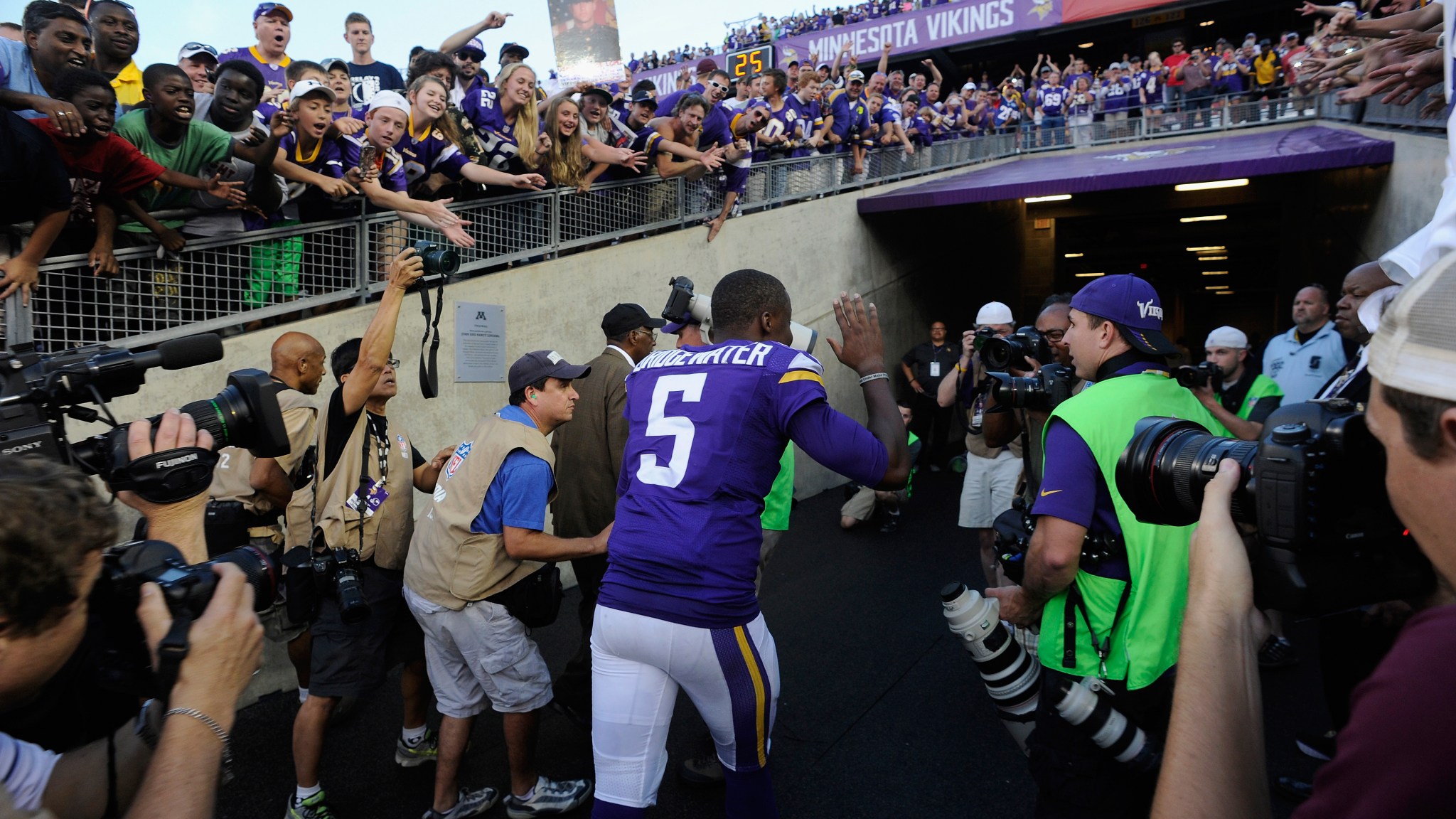 Although other NFL franchises have reached darker quarterback depths — including the pre–Jay Cutler Bears, the post–Dan Marino Dolphins, and the post-expansion-draft Cleveland Browns — the recent futility in Minnesota shouldn’t be ignored. The Vikings replaced Daunte Culpepper by starting 11 quarterbacks in the next eight seasons: Brad Johnson, Brooks Bollinger, Kelly Holcomb, Tarvaris Jackson, Gus Frerotte, (lone bright spot) Brett Favre, Donovan McNabb, Christian Ponder, Joe Webb, Matt Cassel, and Josh Freeman. Those who weren’t over the hill were over their heads.

Minnesota fans were already restless for a dynamic signal-caller before superstar running back Adrian Peterson was removed from the roster following child abuse charges. For an increasingly despondent franchise, Teddy Bridgewater’s starting debut Sunday was the perfect remedy.

The rookie first-round pick from the University of Louisville first hit the field in Week 3, against New Orleans, coming on for an injured Matt Cassel and performing admirably in the hostile Superdome. After Cassel was placed on injured reserve, Bridgewater followed with a solid inaugural NFL start. He threw for 317 yards — the third most ever for a Minnesota rookie — on 19-of-30 passing with no touchdowns and no interceptions, with fans chanting “Ted-dy” throughout a 41-28 upset win over Atlanta.

“I think it sets the bar pretty high,” Bridgewater told USA Today. “But [offensive coordinator] Norv Turner, he always talks about playing a week better, playing better than the week before. So, for me, I just have to try to continue to build off the momentum I have and not get outside of myself or out of my character.” It’s good to see confidence in a young quarterback, but fans should still be cautious about projecting too much from Bridgewater’s performance, which relied on teammates making explosive plays against a feeble Falcons defense.

Bridgewater has every chance to become a reliable, if not excellent, quarterback in the NFL. Some young quarterbacks, like Cam Newton, posted impressive numbers in their first career start and never looked back. Others, like Andrew Luck, always flashed tools that projected NFL success. In general, though, it takes more than seven quarters of play for a proper evaluation.

It’s easy to say Bridgewater will be different from recent first-round quarterback busts1 because of [college highlight] and [physical gift] and [mental strength], but if it were that easy, NFL teams wouldn’t ever waste a valuable draft pick after months of in-depth research. Success in college, or even in early NFL games, isn’t a perfect predictor of long-term production.

And highly drafted quarterbacks face a unique set of circumstances. If they don’t meet expectations, there usually isn’t somewhere else on the field for them to contribute (punt protectors aside); other positions have more flexibility, with Robert Gallery putting together a respectable career at guard after struggling as a decorated tackle prospect. This is how you get depth charts like Minnesota’s, where Bridgewater is backed up by 2011 first-round pick Christian Ponder, an ever-present reminder that quarterbacks have to impress quickly.

The current collective bargaining agreement ended the practice of giving outlandish contracts to players who hadn’t played a down in the NFL. But with the cost of rookie contracts significantly reduced,2 teams are now quicker to move on from a young quarterback. Just this week, the Bills benched 2013 first-round pick EJ Manuel while the Jets ignored the media’s pleas to do the same with 2013 second-round pick Geno Smith.

This tenuous position makes it important for young quarterbacks to start strong, and it’s not unusual for teams to ease them into action with safe throws. On Sunday, Bridgewater relied mostly on short passes — his first four were thrown behind the line of scrimmage — that enabled speedy receivers like Jarius Wright to churn out yards. The Vikings finished with 193 yards after the catch, the third-highest single-game total in the NFL this season. Bridgewater scrambled efficiently and made some strong downfield throws, particularly on Minnesota’s go-ahead drive, but he faced an Atlanta defense that showed Easter Island levels of mobility. Pass pressure was nonexistent and Minnesota receivers ran free for most of the afternoon.

The real test for a quarterback is whether he can produce with defenders in his face. After facing the weak pass defenses of New Orleans (30th in DVOA) and Atlanta (25th), Bridgewater next travels to Lambeau Field to face Green Bay3 before hosting Detroit; both teams are ranked among the top 10 pass defenses.

It bodes well that Bridgewater’s biggest strength in college was delivering accurate passes under pressure, and he has made the best early impression from a draft rich with quarterbacks. Derek Carr has largely been anonymous in Oakland despite starting from Week 1; Blake Bortles showed off his physical gifts in his first start in Jacksonville; Johnny Manziel has been relegated to holding clipboards and money phones on the Cleveland sideline; and New England’s Jimmy Garoppolo and Tennessee’s Zach Mettenberger have seen limited action in garbage time.

Nobody wants to be skeptical when the transformative potential of a Bridgewater comes around (he does have the perfect name for a problem-solver in the Land of 10,000 Lakes), especially not those who lived through the Brooks Bollinger era. But there’s nothing lost by harping caution and patience while hoping Bridgewater goes from showing rookie flash to veteran poise.