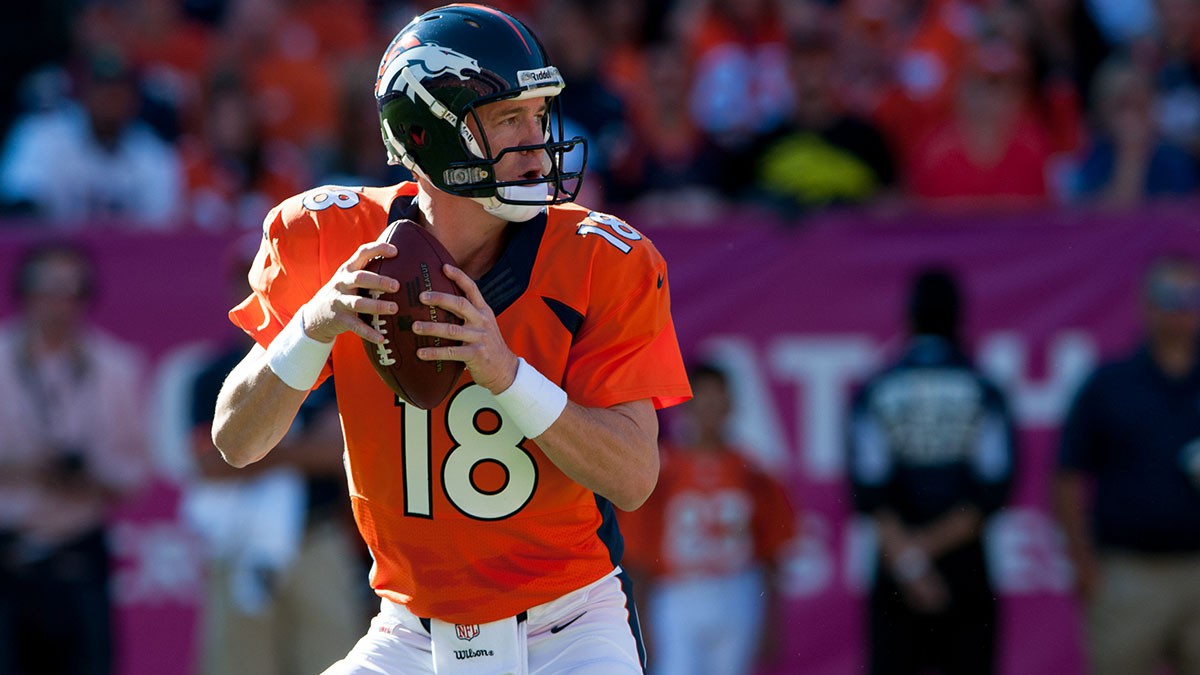 As NBC and Fall Out Boy have told us so often this week, Peyton Manning has lit up the NFL for 506 touchdowns over the past 17 years. The record, which he’ll have his first real shot at breaking this Sunday, sits at 508. It’s hard to say much more than we’ve already said about Peyton Manning. If he’s not the best quarterback we’ve ever seen, he’s damn close.

So instead of debating about the guy who’s thrown those 506 touchdowns, let’s debate about the guys who’ve caught them. The 44 players who’ve caught a regular-season touchdown from Manning — seems low, right? — are listed below, along with their number of touchdowns. This isn’t a ranking of how many they’ve caught from Manning, or even the players they were with Manning as their quarterback. This is about careers as a whole, which is why the top spot might surprise you.

This list only spans Manning’s regular-season touchdowns, but if we’re going to talk about Dan Klecko, red zone threat, the 2006 AFC Championship Game is really all that matters. The game-tying score in a game that eventually took Manning to his only Super Bowl win went to a defensive tackle turned fullback turned defensive tackle with four receptions in his career. In fairness to Klecko, his only other catch for the Colts had gone for a touchdown, three weeks earlier against the Dolphins.

Another defensive tackle occasionally used as a fullback, Unrein caught his touchdown late in Manning’s first season with Denver, in an easy win against Tampa Bay. I really hoped he and Klecko remembered to keep those balls.

Robinson caught 31 passes in his three seasons for the Colts, but his only touchdown came in 2010, against the Patriots in a 31-28 loss. Luckily for Gijon, he easily has the best name of anyone in this club. 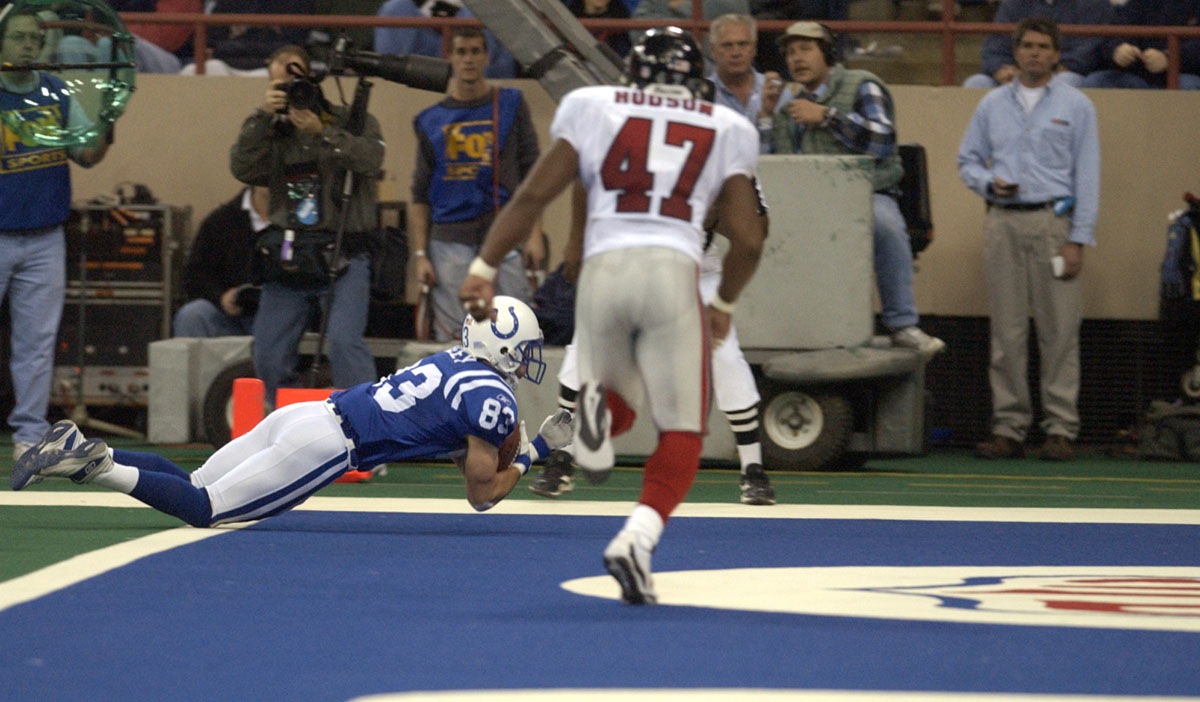 Quick, who owns the FBS record for most receiving yards in a career?

It’s this guy. Insley had more than 5,000 yards during his time at Nevada but only played one season with the Colts before starting his massively successful country music career. I don’t know if that’s true, but with that name, it definitely could have happened.

Warren’s last season in Indianapolis was Manning’s first. He caught 11 passes that year, but his sole touchdown was actually the first Manning ever threw against the Patriots, in a 21-16 loss dominated by Ben Coates and his 10 catches for 109 yards.

Admit that for at least a second, you thought you’d blacked out and missed that Ricky Williams’s stint with the Colts. Don’t worry, I did too. This Ricky Williams caught his two touchdowns during the four games he started for Indy in 2003. If Pro Football Reference is right — and it usually is — there have been only three Ricky Williamses in NFL history, which seems kind of low. 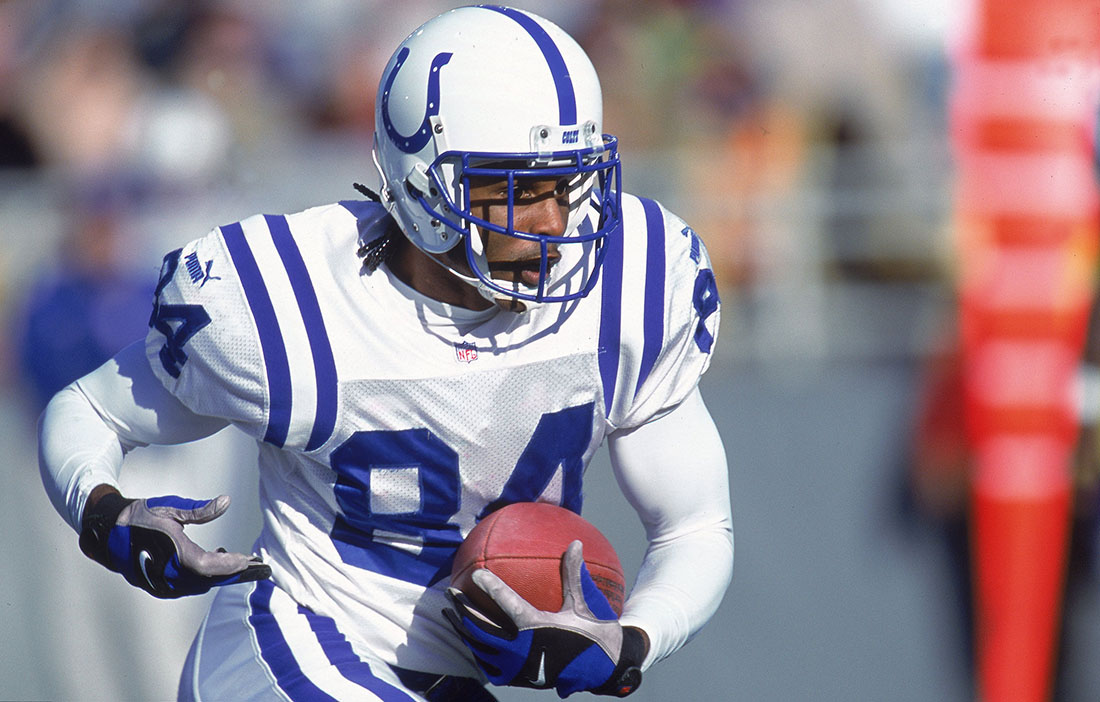 It’s safe to say Gonzalez is the what-might-have-been from Manning’s stretch with the Colts. The two first-round receivers who preceded Gonzalez in Indianapolis have combined for 2,142 receptions and more than 28,000 yards. Gonzalez’s injury-plagued career ended with 99 catches and 1,307 yards to go along with his seven touchdowns.

Of everyone on this list, I was most surprised with Utecht’s total. He was a consistent contributor to two very good Colts offenses, catching 68 passes in 2006 and ’07 combined.

Small played in the league for a decade, but his only season with the Colts came in Manning’s rookie year. It might have been the best year Small ever had. He caught seven of his 31 career touchdowns, and he actually tied Marvin Harrison for the team lead.

I was surprised to learn White only played receiver for a year in Indianapolis. It probably seems like longer because the prospect of him stealing touchdowns from every fantasy-worthy Colt in 2010 seemed endless. He caught five on his 36 receptions and was out of football two years later. In a move that was probably inevitable, he’s now a dentist. 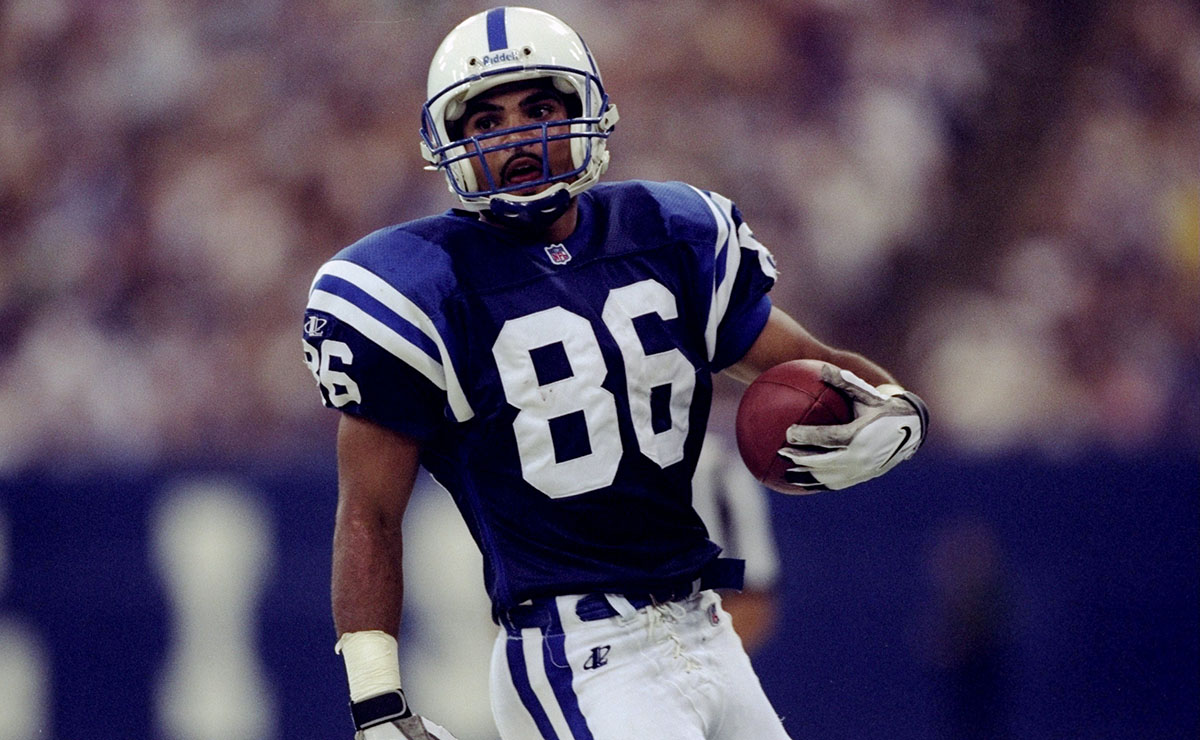 Wilkins and Pathon will be best remembered as the receivers Manning looked to when Harrison had three guys on him. The 28 interceptions from Manning’s rookie year always come up in discussions about patience with young quarterbacks, but the 50 passes he completed to Pathon on 105 targets that year is a pretty good argument, too.

Pathon played only 10 games the next year, so Wilkins, historically a kick returner, assumed no. 2 duties. In 2000, the year Peyton Manning really became Peyton Manning, the two combined for 93 catches, 1,215 yards and six touchdowns. They were Reggie Wayne the year before Manning actually got Reggie Wayne.

Welcome to the nondescript tight end portion of the program. Throwing more than 500 touchdown passes includes plenty of time near the goal line, which means we’ve learned a lot of names since we learned Manning’s.

Of this group, Dilger has claim to the best career. He played in the league for 10 seasons, racking up nearly 4,100 receiving yards in the process, and actually went to the Pro Bowl during his final season in Indy. Tamme is one of two players who’s caught a touchdown from Manning as both a Colt and a Bronco. 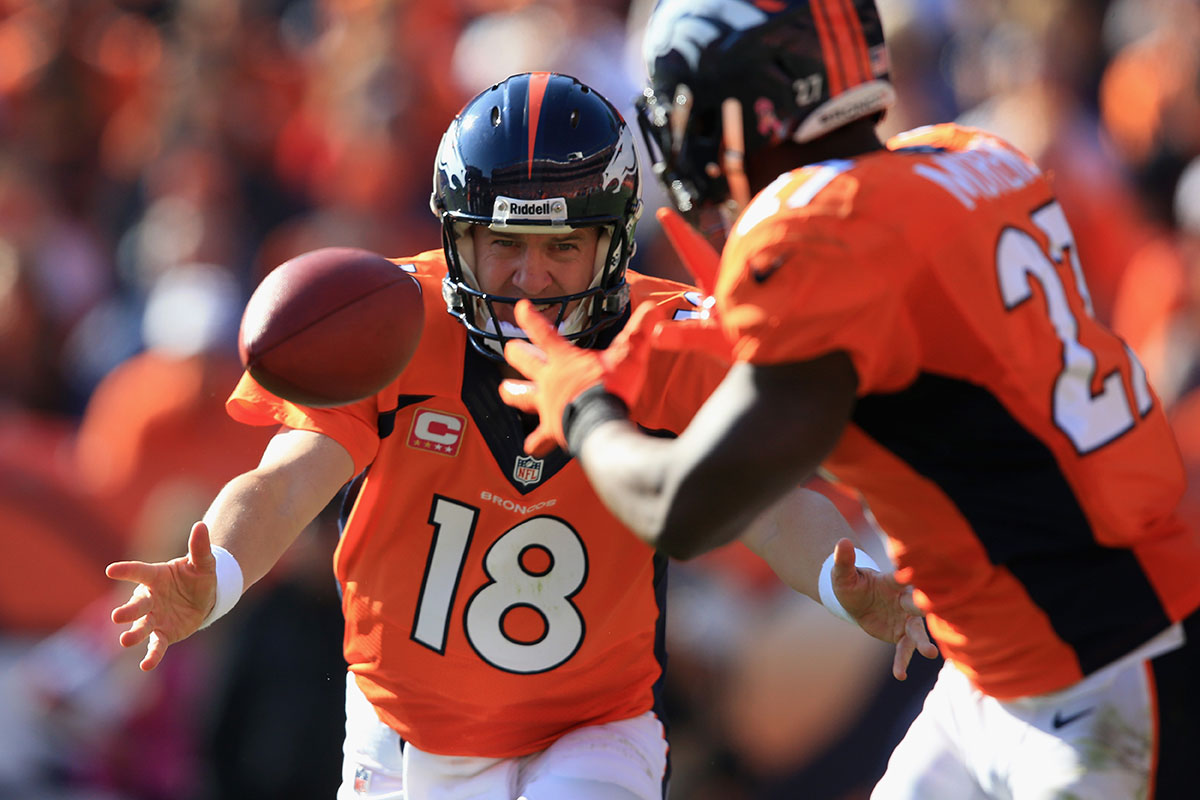 In Manning history, Rhodes’s name will always pop up as the guy who probably deserved the MVP of Super Bowl XLI but was getting it in under absolutely no circumstances.

Addai never developed into the post–Edgerrin James option the Colts probably hoped, but offenses led by Manning have been able to scrounge something together from their running backs since the beginning. Moreno’s career had more or less been left for dead before Manning arrived, but last year, he was a fun, productive player who got a reasonable deal to come play for Miami. I was surprised he’d only caught three touchdowns last year; with the way their screen game seemed to work in Denver, it felt like twice that.

I can admit I’d totally forgotten about Pollard. The Colts tight end in the days before Dallas Clark, Pollard had at least three touchdowns from Manning in seven straight seasons. The basketball player–as–tight end movement might seem new, but Pollard actually came to the Colts out of Bradley without playing a single snap of college football.

Aside from Stokley’s 2004 season, when he was one of three 1,000-yard, double-digit-touchdown receivers for Manning as he burned defenses to the ground, these two had pretty similar production as Manning’s no. 3 receiver.

It’s impossible to think about Collie’s career without getting depressed. He was the perfect type of player to succeed in the slot for the Colts, which is cruelly what got him into trouble. He knew exactly how to find and exploit the open areas of the field, and Manning had few reservations about fitting passes into the tight spots Collie sought out. I can’t remember a player who’s faced more scary moments, and eventually, the concussions became too much. Collie had just three full seasons in Indianapolis.

For his first few years in Indy, Clark was the impossibly consistent third option behind Wayne and Harrison, but he gets a bump from what he provided Manning after Harrison fell off. In 2007, when Harrison was hurt for most of the year, Clark jumped from 30 catches to 58, including 11 touchdowns. Those numbers only grew until he finished with 100 catches in 2009. It’s also a requirement that an all-time great quarterback plays with at least one receiver who never wore gloves, so Clark fills that quota too. 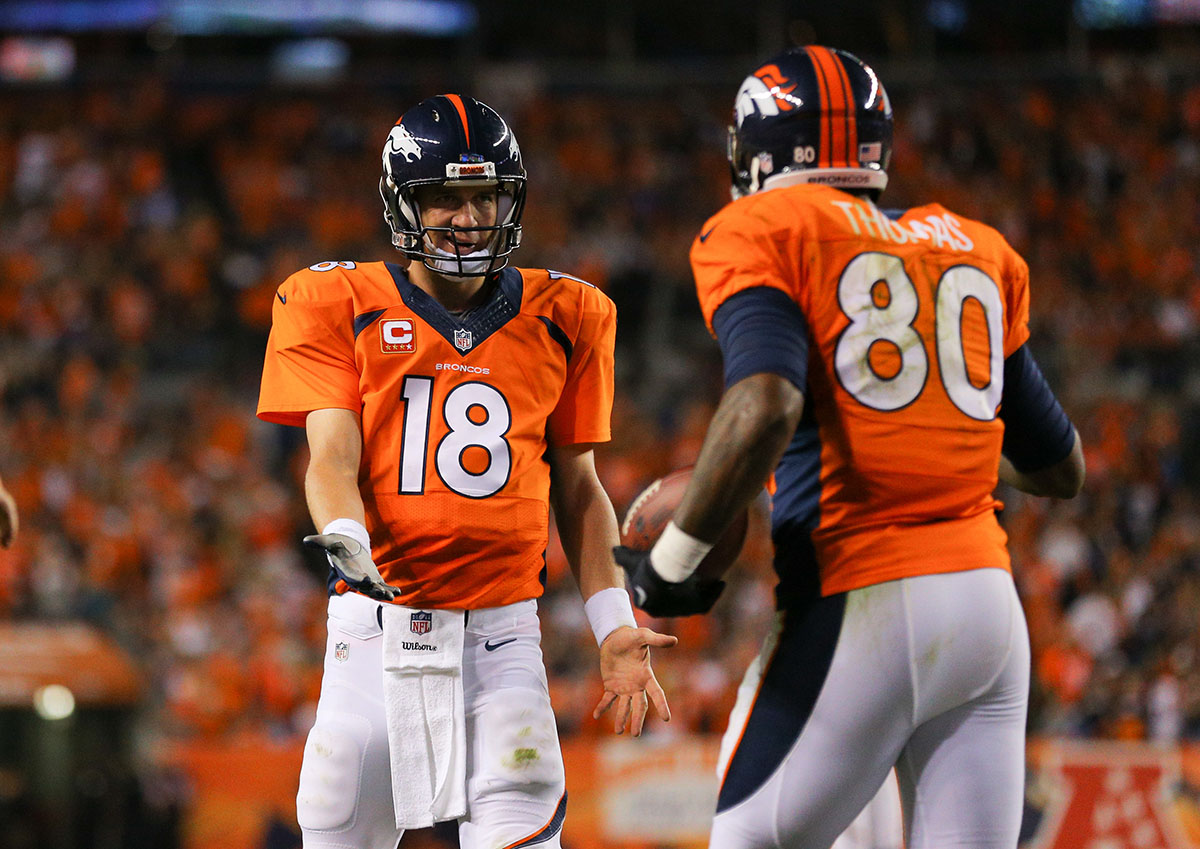 The Thomases are easily the most imposing options Manning has ever had. It is so fucking easy when you’re 6-foot-6 and Manning is throwing you the ball. Julius is the red zone monster that anyone would expect, but it’s Demaryius who stands out as the type of receiver Manning might build in a lab. Demaryius doesn’t have the hands or the jump-ball skills that someone like A.J. Green does, but the game he had against the Cardinals two weeks ago is proof of how he and Manning can be an absolute nightmare.

He doesn’t have to make contested catches on plays like this. All he has to do is have post-human speed, stick his hands out, and let Manning do the rest. He’s big, fast, nearly impossible to wrangle after the catch, and the type of weapon Manning never really had before getting to Denver.

Welker’s only had a season and change with Manning, but since these rankings are based on players’ careers as a whole, he deserves to be this high. We all know what type of reception machine Welker has been since he got to New England in 2007. Since that season, Welker has 42 more catches than any other player in football — 42. That’s a respectable season for a lot of guys. Among the 100 guys with the most receptions in that span, he’s caught 71.9 percent of the balls thrown his way. That ranks 11th, highest among receivers. Sure, it helps that he catches a lot of short passes, but what Welker has been able to do to underneath coverage isn’t solely a product of being a member of some of the best offenses ever. It’s made those offenses some of the best ever.

The thought with Manning running backs is that just about anyone could average four yards a carry, but Edge was the best possible version of that player. Save for a 72- and 62-yarder in his rookie season, James never had one longer than 43 again. He spent his seven seasons in Indy ripping off one 7-yard gain after another, to the point that he’s sitting 11th on the all-time rushing list. 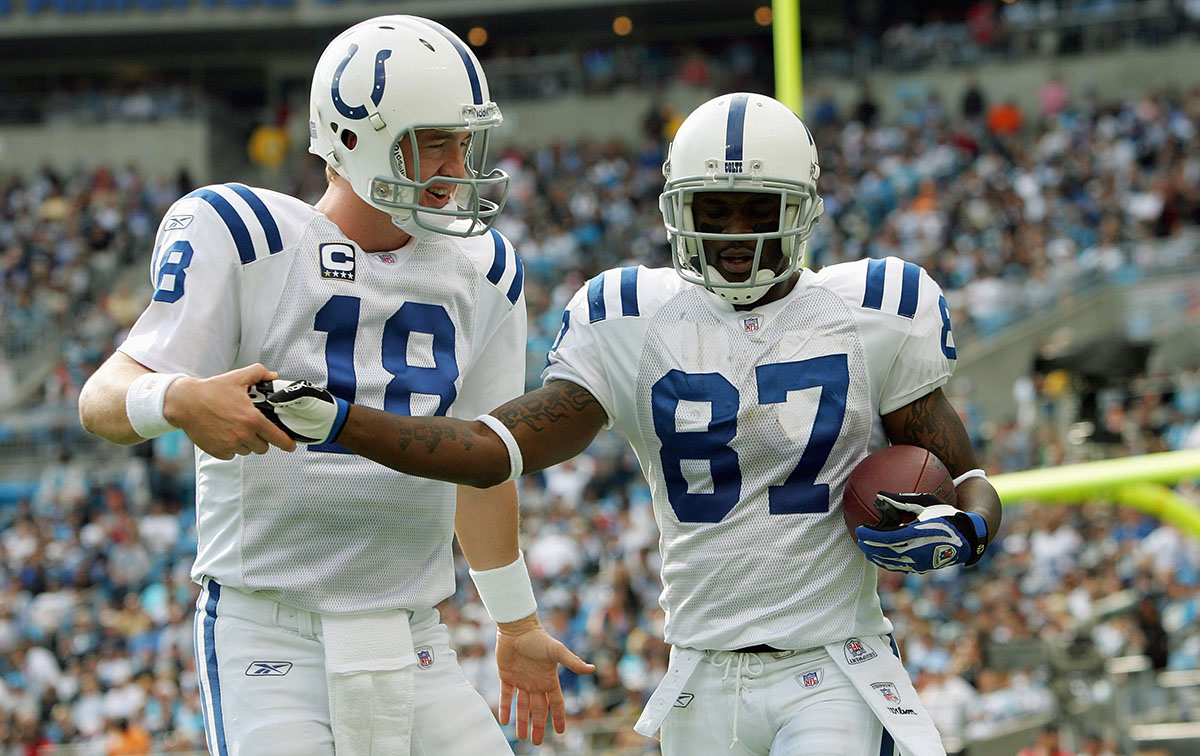 It might have been a few weeks ago, I can’t remember. Someone asked me if Wayne deserved to be in the Hall of Fame. I didn’t really know how to respond, but only because I was caught so off guard by the question. Yes, he played most of his career with Manning, but Wayne would probably be the best receiver in the history of about 25 franchises.

Only eight players have more receiving yards, and by the end of this season it’ll be seven. Only six have more catches. Wayne may have benefited from a pass-happy offense and getting to play across from Harrison, but there’s really no denying what he’s done over the course of his career. He’s in the rarest of company. 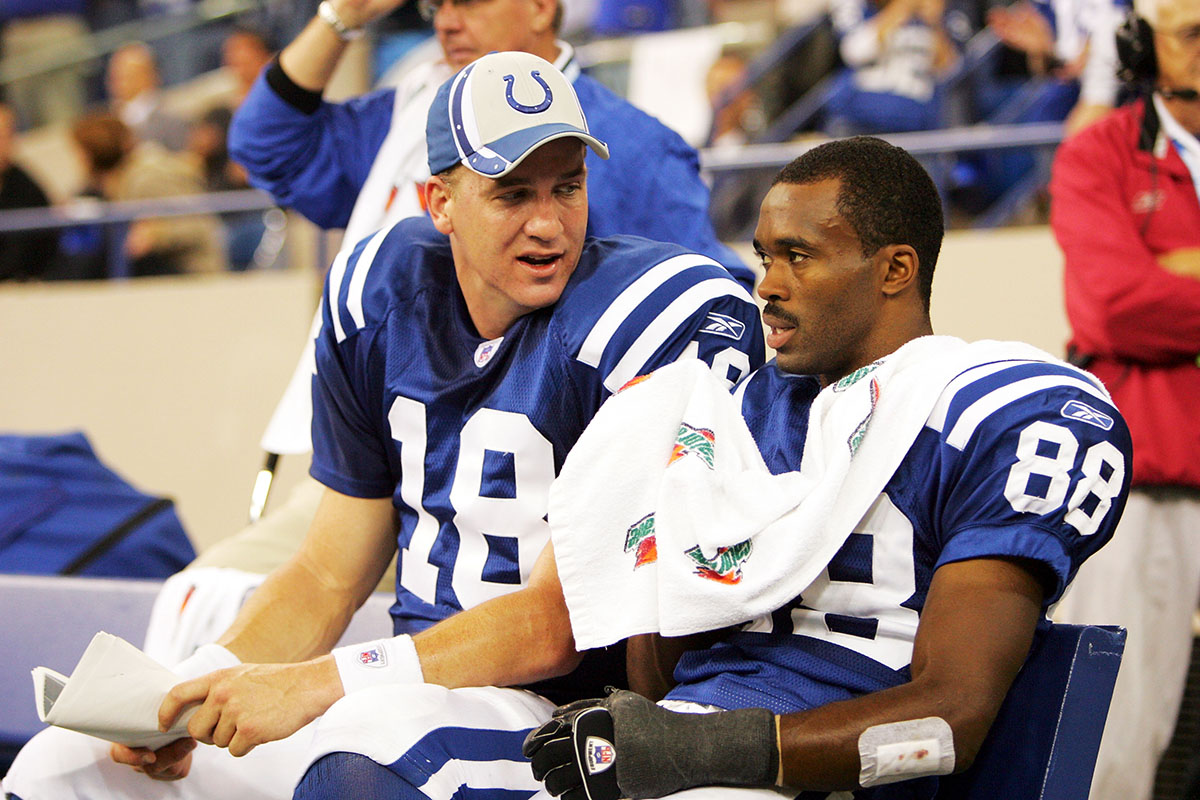 It’s fitting that Harrison caught the first touchdown of Manning’s career, in a loss to Miami during Week 1 of the ’98 season. There’d be 111 more. No quarterback-receiver combo has more. The same goes for yards and receptions. There have been few better receivers, ever, than Harrison, and the way he could operate in close quarters, whether along the sideline or the back of the end zone, made him and Manning close to unstoppable. 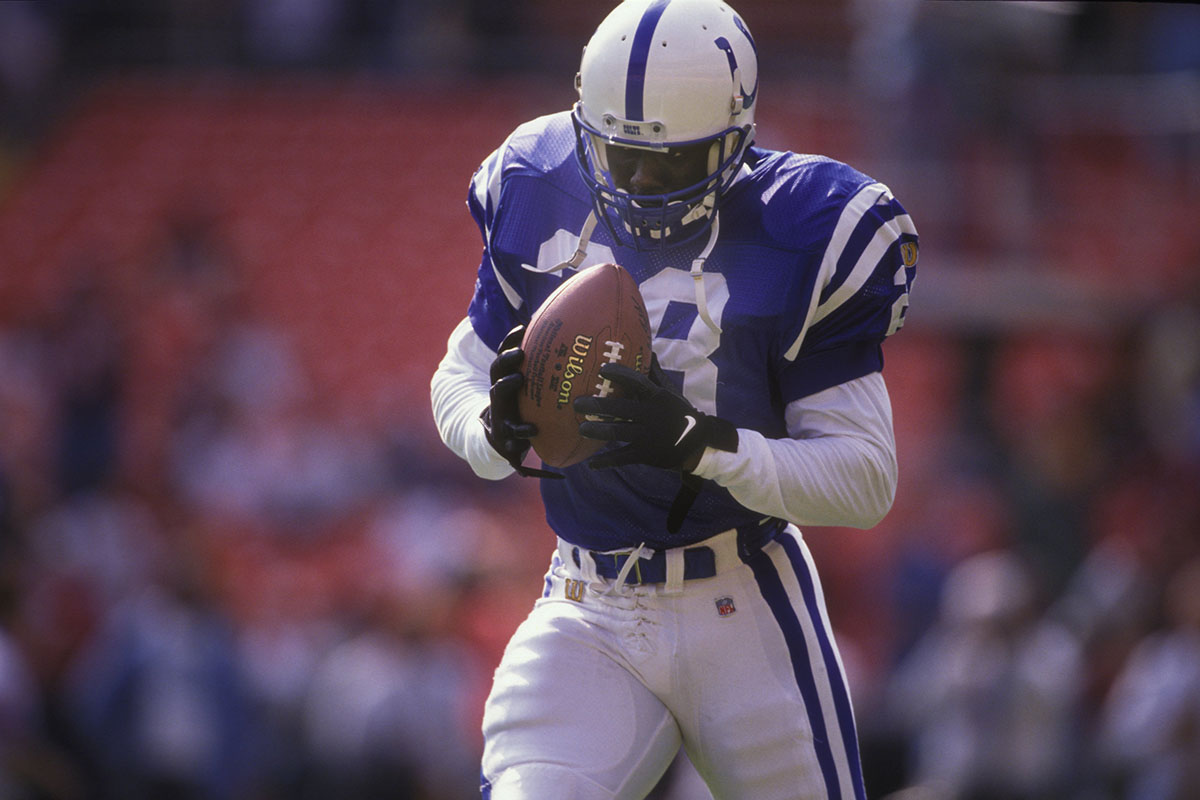 Any player about to break a record like this isn’t going to have many what-ifs in his career, but the one that’s impossible not to consider is, “What would have happened had the Colts figured out a way to keep Marshall Faulk?”

By most accounts, Faulk is the best receiving back in league history, and even with the rookie version of Manning, he caught 86 passes for 908 yards. It was the only season he’d play with Manning. He was traded to the Rams in the offseason for a second- and fifth-round pick, and for the next three years, Faulk was arguably the best player in football. He had more than 2,400 yards from scrimmage in 1999, including 1,048 yards receiving.

Manning did just fine after Faulk left town, but it’s hard not to wonder what might have been had the two stuck together for at least a few more years. I think we can pretty safely say we’d have passed 508 a long time ago.