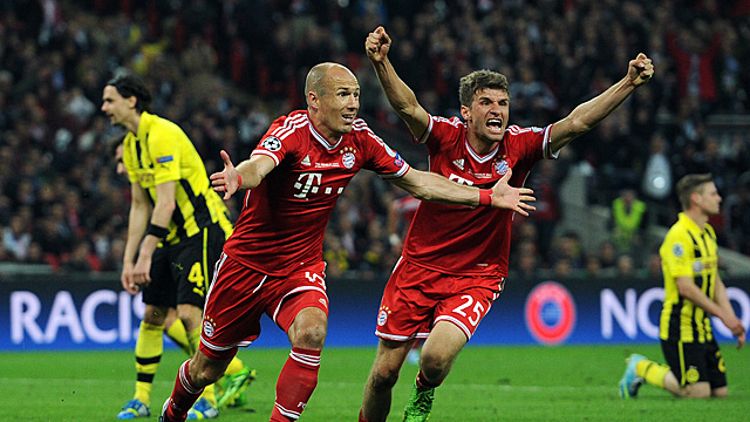 Attack of the Monopod

Let’s start with the biggest story of the final, that of the Dutch Monopod. Monopods, of course, are mythological one-footed, dwarf-like creatures who show up in stories from ancient Greece legends to C.S. Lewis’s Chronicles of Narnia to tales of wild nights with Robin van Persie and Dirk Kuyt. Legend has it that they sleep on their backs using their one foot as an umbrella of sorts and occasionally antagonize Spanish goalkeepers.

All of which is to say that Arjen Robben doesn’t have a right foot. If that weren’t yet clear — this season, 11 of his 12 goals were scored with his left, and this is his right-footed career highlight reel — his total unwillingness to use his right foot to finish during Saturday’s final, despite being given the near post from the right flank on two first-half breakaways, made it blindingly obvious. And yet, in the second half Robben registered a goal and an assist, and in 45 minutes changed his legacy from punch line to legend. So what happened?

Well, let’s work backward. Robben, despite his strange brand of goal-scoring efficiency in Bayern colors (don’t look at his shooting percentage; look at his goals per match, a quality striker’s return of 68/120 since moving to Bavaria; STOP LOOKING AT HIS SHOOTING PERCENTAGE), was outside of Jupp Heynckes’s first-choice XI this season. The development of Toni Kroos as an attacking midfielder, and the addition of Javi Martinez alongside Bastian Schweinsteiger in the double pivot, meant that Thomas Muller was shifted out to the right wing, leaving Robben as an impact substitute. This lineup was much more efficient, specifically built to create a midfield that could mirror Dortmund’s with two creators alongside a winger with better pace. However, when Kroos suffered a groin injury in Bayern’s Champions League quarterfinal against Juventus, Heynckes went back to having two inverted wingers flanking Muller. If you look at the first-half chalkboard, you’ll see this formation:

Predictable, and though Dortmund goalkeeper Roman Weidenfeller had an absolute blinder of a match, he was aided by having an inverted one-footed winger posing the largest first-half threat (aside from a save on a Mario Mandzukic header that I still think was magic). Now let’s look at the second-half chalkboard.

Muller and Robben occupied similar space in the second half. At the same time, Franck Ribery had a greater influence on the match from a somewhat more central position. Meanwhile, Bayern was applying pressure by relying on their fullbacks for attacking width and simultaneously bringing a chaotic element to the match by having all three of their attacking midfielders occupy overlapping space. Robben’s assist came from the left side after he made a brilliant trailing run from a central location, and his goal also came from a run that started in the center of the pitch. Without Kroos or Mario Gotze on the pitch, chaos reigned, and Bayern was able to make the predictability of Robben’s left-footedness just unpredictable enough to create surprising goal-scoring opportunities, which proved to be the difference in the match.

Speaking of Gotze, the Dortmund academy product turned talisman turned soon-to-be most extravagant example of Bavarian largesse (do they really need another midfielder?) … what a horribly awkward day he must have had. Forced out of action with a hamstring injury that conspiracy theorists are already claiming was moon landing–dubious, Gotze was stuck watching from the crowd, rocking a baseball cap and a scarf that would make Smash’s Debra Messing say, “Eh, too much scarf.” The entire soccer-watching world tried to read his emotions. Was he pulling for his boyhood club whom he brought to this point? Or his new club, to whom he had orchestrated a multi-million-Euro move?

Well, let’s take a look at his face after Bayern’s first goal:

Oh boy. That’s tough to read. The match announcers I was listening to on my non–Gus Johnsoned feed said, “Gotze shows no emotion at the goal.” Which, well, maybe. But as Russian filmmaker Lev Kuleshov proved in the early 20th century, the human mind will read emotion into the human face when placed in a montage with other images. Let’s take a look:

All of which is to say, were I to guess what Gotze was feeling while watching that match, I would guess envy. As good as Bayern will be next season, there is no guarantee they will return to the Champions League final. For an athlete of his caliber to have to watch from the sideline must have been incredibly hard, and while he may have been conflicted about the outcome, I can’t imagine he didn’t want to be out there playing with Dortmund one last time. But he’s a 20-year-old millionaire athlete, so my insight into his psychology is questionable at best.

After such an inspired effort, Gotze confirmed to be leaving, and with Robert Lewandowski likely following, it is tempting to bury Dortmund’s future. However, we are entering a period of deep Borussian uncertainty, and any attempt to predict what Dortmund will look like after this summer is pure conjecture. So let’s engage in said pure conjecture, just for a second fully knowing that we know nothing.

Let’s start at the top: With the managerial carousel fairly well shaken out, it looks unlikely that Jurgen Klopp is going to end up moving after this season. Of the clubs making a managerial change this summer, both Manchester sides are settled, and Madrid seems set on bringing in PSG’s Carlo Ancelotti. Klopp has said that he plans to remain at Dortmund for the next three to five years, and given the other positions that are open, it’s reasonable to take him at his word.

With Gotze gone, and Lewandowski effectively out as well, the top players who may or may not continue to play for Dortmund are center back Mats Hummels and center midfielder Ilkay Gundogan. Hummels, despite making the occasional catastrophic blunder, is a world-class center back comfortable with the ball at his feet and also capable of providing an attacking threat. A Bayern product, he has been rumored to be connected with a return to Munich. Hummels has also been connected with Barcelona, who are desperate for depth at center back after being exposed by Munich while playing a makeshift backline in the UCL semifinals. That said, Hummels has stated that he plans to stay at Dortmund for another season.

Gundogan was phenomenal for Dortmund in the final and has been strongly connected with Manchester United as a replacement for Paul Scholes and Real Madrid as a potential replacement for Xabi Alonso. Gundogan is only 22, which is the same age Nuri Sahin was when he left Dortmund for Madrid (the transfer that brought Gundogan into the team at Dortmund). Sahin has since returned to Dortmund from Madrid, opening up room in Spain for Gundogan even though Sahin remains Spanish property, all of which makes total sense.

After those two, most of Dortmund’s key pieces will likely remain intact. Marco Reus is a superstar, and his presence alone can make any team a force in the Bundesliga (see: Borussia Mönchengladbach 2011-2012 vs. Borussia Mönchengladbach 2012-2013). Klopp has proven himself effective time and time again of replacing quality midfielders with less expensive players of comparable quality. Armed with what will likely be at least €60 million from the transfers of Lewandowski and Gotze, he should be capable of reloading. But who knows? As much as German midfielders seem to be growing on trees somewhere deep in the Ruhr, there is always uncertainty when relying on the transfer market to rebuild a squad.

Replacing Lewandowski will prove more challenging. Buying quality strikers is more expensive than restocking any other position. That said, who knows what Klopp’s scouting team has already uncovered. So, again, don’t try to predict what Dortmund will do or whether they will reach these heights again. Just embrace the uncertainty.

For the neutral, this Dortmund side was devastatingly appealing. Klopp’s He’s Hip, He’s Cool, He’s 45 frankness with the media, and his development of a squad that plays courageous football was revelatory for those who do not follow the Bundesliga. Dortmund was the rare Champions League underdog that didn’t attempt to narrow the talent gap through stall tactics or parking the bus, instead pressing furiously for the full 90. Despite Inter and Chelsea creating a blueprint for upsetting Bayern in a Champions League final, Klopp’s side played the brand of riveting football that has become its trademark. When Robben’s touch sunk Dortmund in the 89th minute, I was genuinely disappointed. Not only did I want extra time, but I wanted courage in the face of a juggernaut to be rewarded.

That said, Bayern are more than worthy champions: They are the redeemed. And no player deserved this more than Schweinsteiger. A product of Bayern’s academy, Schweinsteiger has amassed more than 400 appearances with the club and 98 caps for the German National Team. Through that time he has evolved from a brash attacking midfielder, who relied on his pace and power to influence a match, into a more cerebral, deep-lying playmaker, able to influence the game with or without the ball. He has personally evolved as well, having started his career notorious for his off-the-pitch behavior, embodying many of the unsavory aspects of Bayern’s FC Hollywood reputation, before settling down as he has gotten deeper into his 20s and becoming vice-captain of the team. I don’t mean to force a puritanical narrative on his development, merely to note that Schweinsteiger has, unlike so many others, matured and developed as both an athlete and person despite massive early success. Yet until this past weekend he had suffered only heartbreak at the highest levels, losing in the finals of Euro 2008, the semifinals of the last two World Cups, and two of the last three Champions League finals.

Now let’s take a look at his chalkboard from this year’s final.

Total control of the middle of the pitch. Or look back up to the player influence chart. Schweinsteiger was Godzilla in this match.

Last season’s UEFA Champions League ended with Schweinsteiger dragging a penalty kick onto the post, Chelsea’s Petr Cech’s fingertips making the Bayern midfielder a tragic figure. This season’s final ended with Schweinsteiger, the most influential man on the pitch, having completed 14 more passes than any other player, arms raised in triumph. You can extrapolate this narrative for so many veterans on this Bayern side — Philipp Lahm, Muller, Ribery, et al. — who have suffered so many heartbreaks for club and country. As disappointed as one might be that Dortmund fell, I find it impossible to feel anything other than joy for the individuals on Bayern Munich. Yes, even the Monopod. Especially the Monopod.

NBA Playoffs Shootaround: Right Where They Want Them