Broken at Bayern: What’s Next for Pep Guardiola? 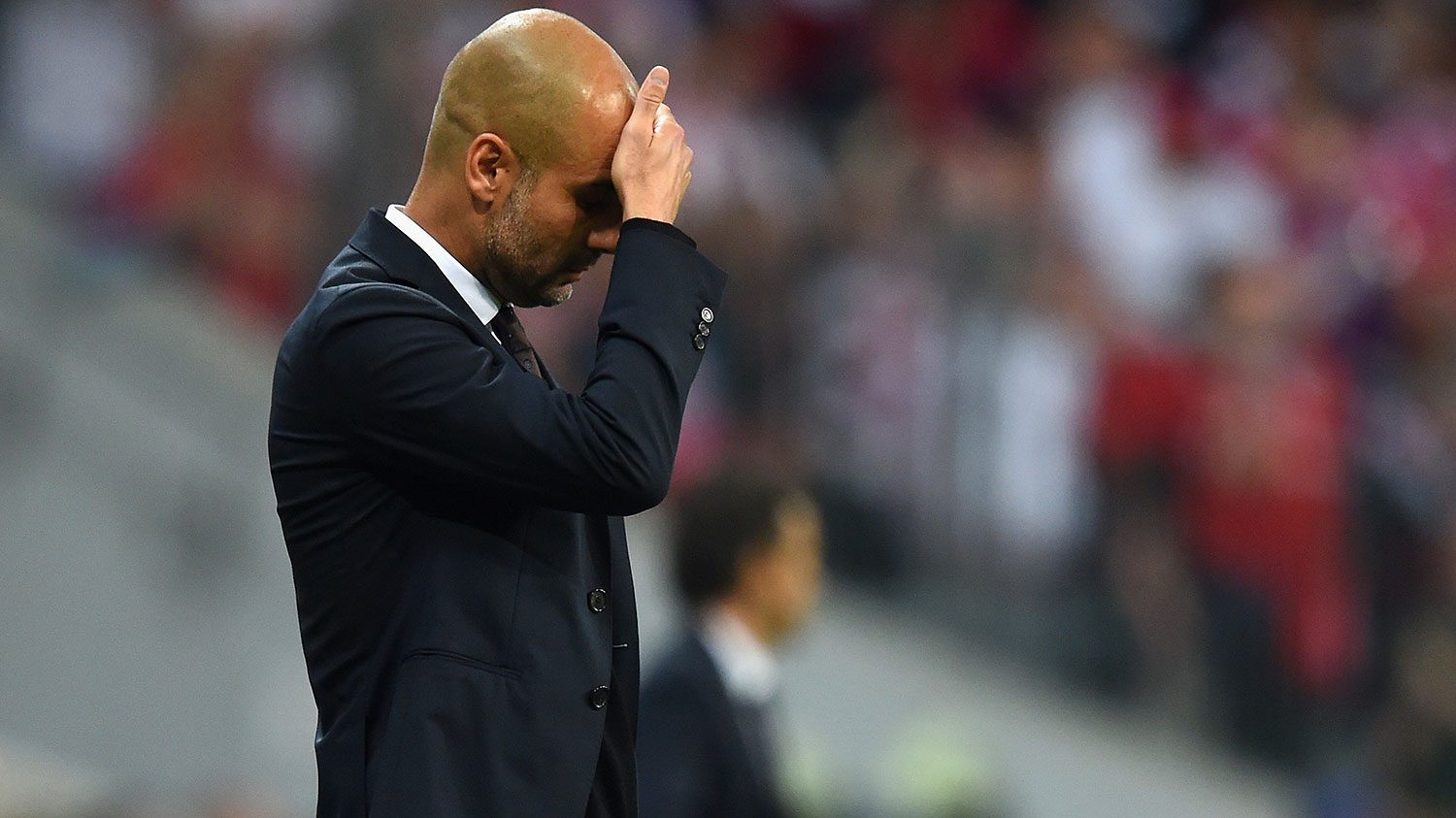 For the second year in a row, Pep Guardiola’s Bayern Munich have been handily beaten in the semifinals of the Champions League. In both last year’s 5-0 aggregate defeat to Real Madrid and this year’s 5-3 loss to FC Barcelona, Guardiola took his ultra-possession-oriented side up against a team that was able to counterattack at lightning speed, and both times his defense was ripped apart like papier-mâché. And so, after two years of disappointment, we have to ask: What’s next for Guardiola?

First, let’s address that question in the literal sense: Will Pep Guardiola be on the sideline at Bayern Munich next year? After his side was trounced in the first leg last week, reports surfaced that Guardiola had agreed to a deal to leave Bayern Munich for Manchester City next season. Everybody has been busy denying it, but even if Guardiola is back at Bayern next year, he will still be entering into the final year of his deal, and Manchester City will still be run by Txiki Begiristain and Ferran Soriano, both of whom helped run Barcelona while Guardiola was there. So if the move doesn’t happen this summer, the two sides will have all of next year to ogle each other from across the continent.

From a results standpoint, Guardiola’s current reign at Bayern Munich looks like a failure. However, that says more about where the team was when he took over than how he’s done at the helm. Jupp Heynckes coached Bayern to a treble1 the year before Guardiola arrived, so his “failure” amounts to two semifinals losses in the Champions League and a shootout defeat this year to Borussia Dortmund in the domestic cup. Beyond those results, when comparing Pep and his predecessor, we’d be arguing about the varying degrees to which they both beat the snot out of the rest of the Bundesliga.

Yet Guardiola’s mandate is about more than results; it’s about style. It’s about bringing his way of playing to Germany and evolving Bayern Munich for the future. So while it’s unfair to look at the results of any three matchups as definitive proof of anything, we can look at how Guardiola’s teams have played and ask whether the pursuit of winning this way has been worth it. Hiring him at Bayern Munich was a statement: Winning on the counterattack is great, but winning the Guardiola way is even better.

Two years on, is that still true? Why is winning the Guardiola way stylistically better than winning the way Barcelona did in this year’s semifinals? This Barcelona side looked dramatically different from the iteration under Guardiola, but with a breathtakingly dynamic front three of Lionel Messi, Neymar, and Luis Suárez, were they any less entertaining? And the same can be said of Real Madrid in 2014: Seeing Cristiano Ronaldo, Gareth Bale, and Karim Benzema in full flight was spectacular. So what is it about playing this way that makes Bayern Munich more appealing than the year before Guardiola got there?

Now, you could look at Bayern’s injury-riddled roster and suggest that the missing wingers — Franck Ribéry and Arjen Robben — would have made this Bayern team dynamic, just as they have for much of the past two seasons. But both Ribéry and Robben are on the wrong side of 30, and if Guardiola is supposed to be evolving this team into the future, well, those two guys won’t be a part of it. And you could also say the same for Bastian Schweinsteiger, Philipp Lahm, and this year’s summer acquisition, Xabi Alonso, who all started yesterday. What exactly is the point of hiring Guardiola for three years, giving him a mandate to shape the future style of the team, and then having him mold a bunch of players who won’t be there much longer than he is?

None of this is a knock on Guardiola. He is clearly one of the best soccer coaches in the game today and an iconic force who shapes how the game is played. He is stylistically extreme, and that makes him interesting. For it to become transcendent, he needs a team that’s built — from the youth system on up — to play his demanding, possession-or-die style. With Lionel Messi, Xavi, and Andrés Iniesta, Barcelona were that team — and Manchester City would certainly be improved by hiring him and letting him completely revamp the way they do things. Only a tiny handful of clubs wouldn’t.

But Bayern Munich were one of those very few teams. And now, two years later, with the club knocked out of Europe by a team that not only outplayed them, but also outstyled them, the question remains: Is winning with Pep Guardiola better than winning without him? And if the answer is “no,” then is there anything left for him in Germany?