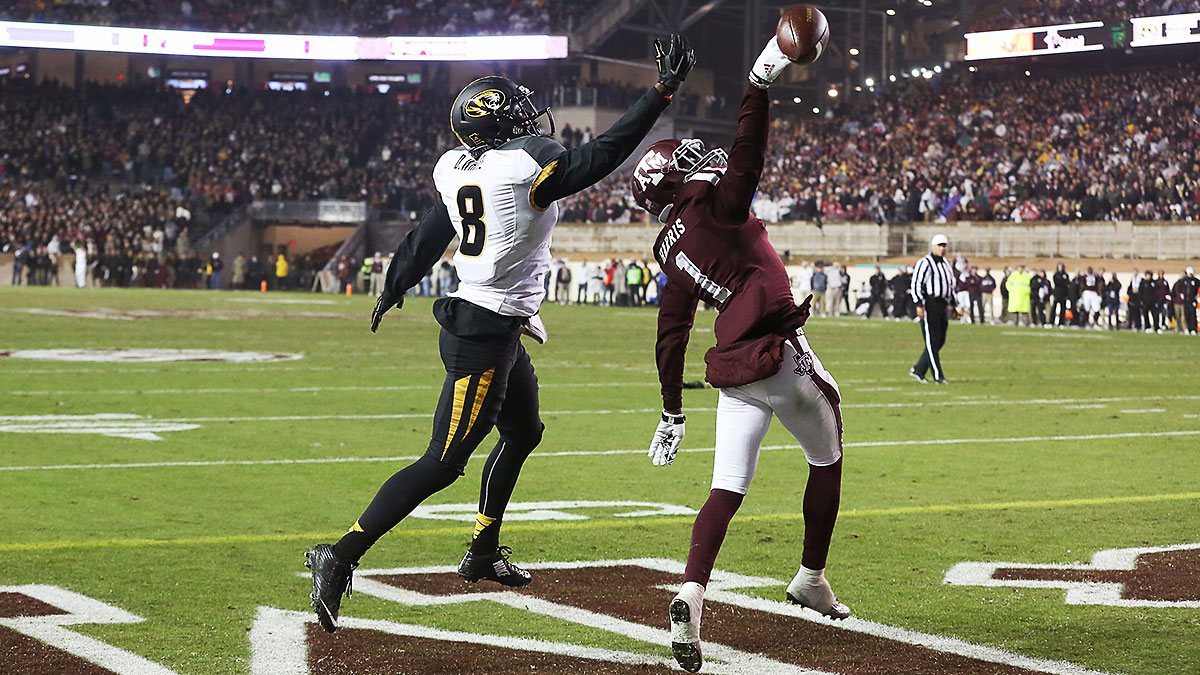 Earlier this decade, college football was defined by two main phenomena: SEC supremacy and conference realignment, both of which peaked in 2012. The calendar year began with Alabama and LSU squaring off for the national championship in a much-anticipated Game of the Century rematch, marking the first time two teams from the same conference had ever played for the BCS title. The Tide rolled over the Tigers in a 21-0 shitshow, becoming the sixth straight SEC outfit to hoist the crystal football (R.I.P.). As the celebratory confetti rained down upon Nick Saban and his infinite supply of NFL-bound players, it seemed like the SEC’s reign of dominance might never end.

Six months later, Texas A&M and Missouri officially left the Big 12 for the fiscally greener pastures of the SEC, in what was probably the most significant shake-up of the realignment era. Naturally, that put the Aggies and Tigers at the center of both phenomena, and they’ve remained intriguing bedfellows ever since.

They began their SEC tenures, of course, as outsiders — unwanted by traditionalists, unfeared by everyone but Vandy fans. Perhaps the best glimpse into the SEC’s (justifiably) colossal self-regard came in the unmitigated contempt that fans and media members expressed for A&M and Mizzou upon their joining the conference. “Can Texas A&M and Missouri cut it in the SEC?” asked one such skeptic, speaking for a nation of SMH-ing doubters. The answer, most assumed, was no.

That doubt was justifiable: A&M and Mizzou hadn’t exactly been juggernauts in the Big 12, and their schedules were about to get significantly tougher, especially for the Aggies, who’d be entering the loaded West division. Expectations weren’t merely low for the two programs heading into 2012: They were essentially nonexistent.

So it was truly a welcome surprise for non-SEC partisans when the breakout star of the 2012 season turned out to be a hard-charging quarterback named Johnny Manziel, who led the Aggies to an 11-2 record and became the first freshman to take home the Heisman Trophy. The dude was a divine revelation.

That’s a fairly long video by Internet standards, but I encourage you to watch all nine minutes of it. Between Manziel’s endless off-field drama and rather disappointing pro career, it can be easy to forget what made Johnny Football such a compelling figure in the first place: namely, his uncanny ability to turn nothing into something on the gridiron. The fact he partied like a rock star in a Scooby-Doo costume in his spare time was merely icing on the cake.

As you surely remember, Manziel mania reached a crescendo during A&M’s thrilling 29-24 upset of no. 1 Alabama. In addition to cementing JFF’s superstar status and causing severe emotional distress to Paul Finebaum’s listeners, the game definitively established that a transplant like A&M was capable of holding its own against a long-standing SEC powerhouse like Bama. By season’s end, it was impossible to deny that, in a matter of months, the Aggies had become something approaching SEC royalty. They weathered multiple Manziel-related controversies to maintain that status through the 2013 season, which culminated in a rollicking Chick-fil-A Bowl win over Duke, and entered 2014 with high hopes despite losing a veritable plethora of talent to the NFL.

This optimism ultimately proved to be misguided. Although the 2014 Aggies got off to a tremendously hot start, they fizzled out badly in October, losing to Mississippi State, Ole Miss, and Alabama by a combined score of 142-51. Aggieland had seen better months.

Still, A&M’s abjectly miserable October featured one positive byproduct: It forced Kevin Sumlin to bench quarterback Kenny Hill for the untested but much-hyped freshman Kyle Allen, who performed admirably over the final five games of the season, most notably in an upset victory at no. 3 Auburn and in a 45-37 Liberty Bowl win over West Virginia. Consequently, there’s reason to be cautiously bullish on the Aggies going into the 2015 season, especially since they have freshman phenom Kyler Murray waiting in the wings if Allen begins to falter.

Missouri’s transition to the SEC, meanwhile, wasn’t quite as smooth. The Tigers went 5-7 in 2012, their first losing season in eight years — but something clicked in 2013, when quarterbacks James Franklin and Maty Mauk combined to lead Mizzou to a 12-2 record and an SEC East title. The Manziel-esque Mauk proceeded to take the Tigers to another SEC championship game in 2014, and though they got trounced by Alabama, two division titles in three years qualified as a resounding success.

Now that A&M and Missouri are entering their fourth year in the SEC, however, the honeymoon phase is officially over. As such, it won’t be enough to just maintain the status quo; eventually, a conference title and/or a playoff berth will be needed to preserve the respect these programs improbably earned from 2012 to 2014. Otherwise, they’ll start to be viewed as little more than fodder for the SEC’s legitimate, perennial championship contenders. 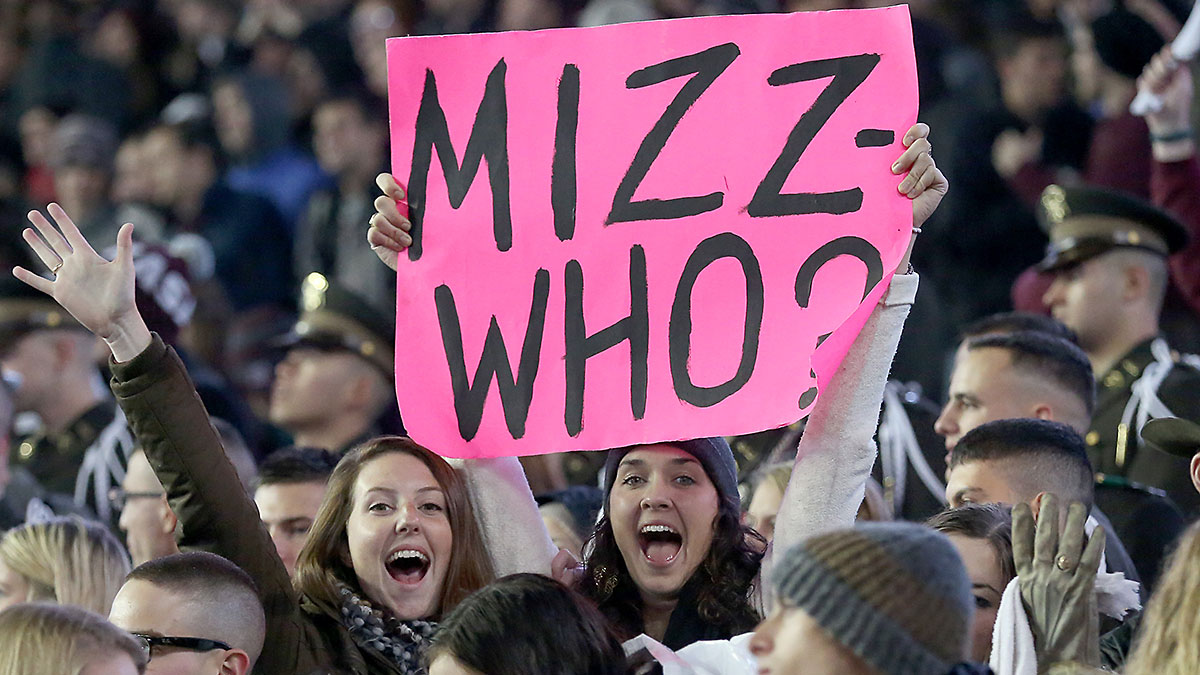 Part of that stems from the fact the SEC is no longer the almighty force around which the entire college football world revolves. The past two national champions have come from the Big Ten (Ohio State last season) and the ACC (Florida State the season prior), and for the first time since 2006, the preseason Coaches Poll failed to include an SEC institution in its top two. Moreover, the playoff has democratized college football in unprecedented fashion, effectively ensuring that debates like the ones in 2006 between Florida and Michigan and in 2011 between Alabama and Oklahoma State won’t be settled in polls.

Some are now even arguing that the SEC isn’t the strongest conference in the FBS, especially after such an uncharacteristically mediocre bowl showing last season. And in light of that shifting reputation, regular-season blowouts to, say, Georgia or LSU won’t be quite as forgivable in 2015 as they were a few years ago, when most people thought the SEC was in a different stratosphere, and that occasional stumbles along the way were a given.

In some ways, then, A&M and Missouri are back to where they were in 2012. Though the SEC has shifted around them, they’re once again in the same boat, forced to meet an unusually high standard because of the league they’ve chosen to join and their relative standing as newbies within it. Now, don’t get me wrong: The SEC remains as deep as ever, but it lacks the historic top-heaviness of its early 2010s heyday. This has been especially noticeable in the increasingly lackluster East, which has declined to the point where Mizzou’s back-to-back division titles are only moderately impressive. To paraphrase Green Day, wake me up when they play a fully competitive SEC championship game.

While the initial consternation about A&M and Mizzou’s ability to adapt to the rigors of the SEC may have smacked of old-money elitism, it hasn’t proven to be totally unfounded, either: We know that the Aggies and Tigers are capable of beating their conference rivals on any given Saturday, but we also know they’re prone to suffering inexplicably embarrassing losses, like when no. 6 A&M got annihilated in Starkville or when 3-0 Missouri dropped a nail-biter to Indiana at home. Those types of things don’t happen to eventual SEC champions.

Along with roster turnover, maybe this is why the public’s expectations aren’t exactly sky-high for these programs in 2015, with Mizzou opening the season at no. 23 in the Coaches Poll, and A&M unranked. Yes, both squads boast lots of untapped potential, but due to their newcomer status, they won’t receive much respect until they demonstrate a consistent ability to turn raw talent into something more concrete and established. Until then, expect to see the same old traditional powers representing the SEC in the College Football Playoff till the stars burn out.

‘The Jonah Keri Podcast’: Pedro Moura on the Angels, and Cousin Sal on the Mets