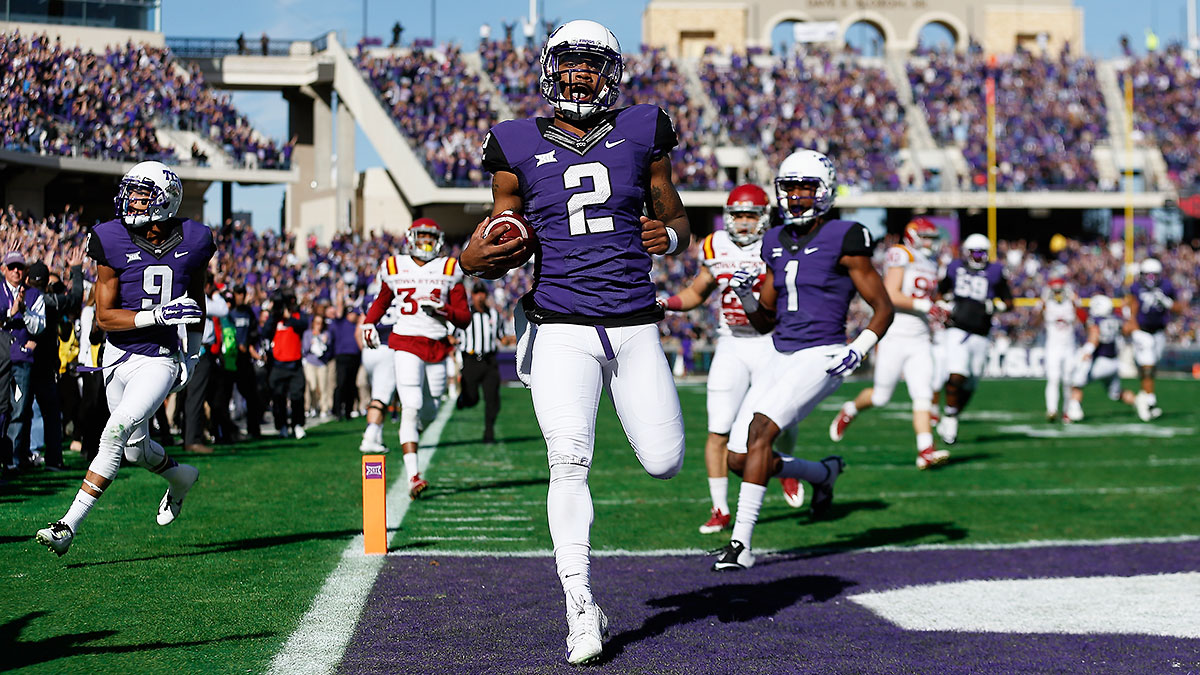 One of the cornerstones of college football is the small army of former high school quarterbacks who arrive on campus labeled “athletes,” a term that roughly translates to “not cut out to be a college quarterback.” Their career arcs tend to unfold along one of several well-worn tracks: For most, the writing is on the wall clearly enough, early enough, that the full-time transition to wide receiver or defensive back is a foregone conclusion; for others, it may take a year or two behind center, or maybe even a transfer, before the inevitability of a position switch finally sinks in. If an “athlete” does stick at quarterback, it’s typically in one of the few remaining systems in which passing is an afterthought, or in the dreaded “change of pace” role behind more polished passers in more conventional schemes — and either way, the NFL is likely a pipe dream.1

Then there’s TCU’s Trevone Boykin, a relatively lightly recruited prep QB from Mesquite, Texas, whose evolution from anonymous three-star project to entrenched All-American triggerman on one of the pass-happiest offenses in the nation has transcended any attempt at typecasting. For a while, most of the usual assumptions about quarterbacks with Boykin’s borderline profile held true: Though he made 15 starts in 2012 and ’13 in relief of the suspended and then injured Casey Pachall, Boykin also spent large swaths of those seasons2 “maximizing his versatility“ as a running back, wide receiver, and Wildcat QB. About this time last year, he was a potential transfer risk facing a murky future, having yet to look like more than a temporary stopgap behind center; by the end of the 2013 season, he’d essentially been converted into a full-time receiver, inspiring such little confidence as a potential starting quarterback that TCU coaches recruited Johnny Manziel’s former Texas A&M backup to compete for the job. Now, Boykin will open his fifth year in Fort Worth as the owner or soon-to-be owner of every relevant TCU passing record, and the odds-on favorite to win the Heisman Trophy.

What happened in between is well-documented: The Horned Frogs spent the 2014 offseason installing the Air Raid, then watched Boykin flourish in the new system beyond anyone’s wildest dreams, completing more passes for more yards and more touchdowns than any other Big 12 quarterback. His efficiency rating leapt by more than 20 points; his interception rate plummeted by nearly half. Against FBS defenses, the previously moribund Frogs ranked fifth nationally in total offense, tied for eighth in yards per play, and second in scoring. They came within a hair’s breadth of making the College Football Playoff, laid waste to Ole Miss in the Peach Bowl, and are widely regarded as the most likely threat to Ohio State’s bid to repeat as national champion. No other team, and arguably no other player, has come so far, so fast, with such little foreshadowing.

But the what and when of Boykin’s about-face don’t quite get us past the most pressing question: How? Unlike the vast majority of young quarterbacks who burst onto the national radar without notice, Boykin wasn’t an unknown commodity or a touted up-and-comer who had fans giddy over his potential; he was a fourth-year player with an established track record of mediocrity that corresponded with the middling projections from his recruitment. His skill set seemed especially ill-suited to TCU’s post-2013 offensive overhaul. He might easily have been lost in the transition, and in some corners, he was expected to be. Under those circumstances, how on earth did a fringe starter become a star? 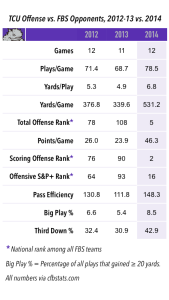 The first misconception to clear up about the Air Raid in general, and TCU’s version of it in particular, is that it tends to be a screen-heavy, dink-and-dunk offense that rarely asks its quarterbacks to challenge secondaries downfield. In fact, the most obvious motive for coach Gary Patterson’s decision to adopt the system was his team’s glaring lack of big-play prowess under the old scheme: Compared to 2013, last year’s attack generated a significant increase in passing plays of at least 20 yards (63, up from 35) and tripled the number of 40-yarders (18, up from six). As a team, the 2014 Frogs averaged 8.0 yards per pass (up from 6.5) and 13.0 yards per completion (up from 11.3), incremental gains that add up to huge yields over the course of 40 attempts per game. Boykin ranked among the top 10 passers nationally in passing plays of at least 20 yards (58), 30 yards (28), and 40 yards (16).

Along the same lines, the biggest revelation in 2014 may have been Boykin’s arm strength, which hadn’t been on display often earlier in his career but suddenly emerged as the most salient feature of the offense (in conjunction with long-ball specialists Josh Doctson, Kolby Listenbee, and Deante’ Gray on the receiving end). It’s hard to believe there was ever any question of whether the guy who made this throw, a first-and-10 dime at Baylor that hit Listenbee on a dead sprint from 51 yards out, was capable of developing into a competent passer:

Ditto this 49-yard play-action bomb against the resident Big 12 doormat, Iowa State, a throw that couldn’t have been more perfectly placed if it had been thrown into a couple of stationary trash cans instead of double coverage:

For his part, Listenbee is a track star who owns the unofficial title of Fastest Player in College Football by virtue of a 10.04-second 100-meter dash, which makes him an especially difficult target to hit in stride; it takes a next-level arm just to get the ball in front of a guy who can cover that much ground without making him throw on the brakes. But Boykin made a regular habit of it: Twelve of Listenbee’s 41 catches went for at least 30 yards.

The other misconception about the shift to the Air Raid is that it represented some kind of truly radical change. For the defensive-minded Patterson, maybe; for the players, though, far from it. Like the vast majority of Texas quarterbacks these days, Boykin grew up in a no-huddle, spread passing system largely derived from the same playbook installed by co-coordinators Doug Meacham (a longtime Air Raid disciple at Oklahoma State and Houston) and Sonny Cumbie (an Air Raid lifer who played and later coached under Mike Leach at Texas Tech) when they arrived in Fort Worth last winter. “We went back to the offense he ran in high school,” Patterson said last month. “We kind of went back to what he was used to.”

That comfort level was obvious, and it might have more to do with Boykin’s great leap forward than any sort of inspired tinkering with his footwork or mechanics. Boykin did a better job last year of seeing the entire field from the pocket, Patterson said, and particularly of looking beyond his first read to find an open receiver rather than resorting to his instinct to tuck and run in panic. (A vastly improved offensive line helped to put off the buzzer on his internal clock.) That combination of patience and downfield awareness was evident on many on-the-run throws that might never have left the younger Boykin’s hand, like this heave to Listenbee at Baylor, or this dagger of a touchdown pass to Doctson in the bowl game that slammed the door on any thoughts of an Ole Miss comeback in the second half:

To Patterson, though, the most important difference in Boykin’s game under Meacham and Cumbie was the freedom to be creative within the offense, which is to say, the freedom to be himself. “The biggest thing that both of those guys gave him was more from a confidence standpoint,” Patterson said. “It was saying to him and giving him a chance to show to himself, ‘this is what you can be.’”

No one seems quite certain yet what Boykin can be at the next level: Depending on which preseason scouting reports you read, you can come away believing he has “very average arm strength“ or that he boasts one of the strongest arms in college football;3 he might have “a bright future ahead of him“ in the NFL, or project as a midround pick, or wind up an undrafted free agent. There’s the usual hand-wringing over his elongated throwing motion and (of course) the fact he plays in a spread offense.

Where his more immediate future is concerned, there are still reasonable doubts about Boykin’s accuracy and consistency on the college level: He completed fewer than half of his passes in the Horned Frogs’ only 2014 loss, at Baylor, as well as in a narrow escape at West Virginia. There’s some lingering suspicion that last year’s surge was sometimes a case of quantity over quality. The TCU defense, while more generous than usual last year in most respects, made significant contributions on the scoreboard by forcing an FBS-best 3.1 turnovers per game; between those takeaways and special teams, the Frogs scored eight non-offensive touchdowns and set up 25 scoring drives that began inside the opponent’s 40-yard line. And historically speaking, teams that turn in a lopsided postseason victory on the order of TCU’s 42-3 rout over Ole Miss4 sometimes get slathered with an extra dollop of hype to begin the following season — one they often struggle to justify.

If there’s a truly noteworthy red flag in Boykin’s game, though, it stems from the dramatic gap between his performance against the best teams on the schedule and the worst:

It’s no great insight that most quarterbacks fare better against worse opposition, but a 46-point drop in pass efficiency is a considerable margin. (Especially when you consider that the winning category includes Boykin’s 410-yard, three-touchdown outing against Oklahoma State, a team that pulled out of a midseason free fall just in time to limp to a 7-6 finish.) For some context, his rating against opponents that finished below .500 ranked 10th among FBS quarterbacks; his rating against winning opponents, 52nd. That divide is also reflected in the fact that, in contrast to the fireworks in conventional box scores, TCU was a relatively distant 33rd nationally in Passing S&P+. (The four playoff teams all ranked in the top seven in the same category.) For an outfit harboring championship ambitions, the margin for error isn’t nearly that large.

Still, if the Frogs stand any chance of making good on the hype, it will only be by virtue of their senior quarterback continuing the upward trajectory he began as a junior, toward a ceiling that no one — probably even his own coaches, if they’re being honest — had any notion was within reach before last season began. Now that it’s been established, the reward is higher stakes, a harsher spotlight, and a much steeper grading curve. But the last gap that remains is minuscule compared to the one Boykin has already crossed. There’s no demand for another great leap forward — just one more solid, sustained push.