A Man at 47: Is Mike Gundy — the Most Successful Head Coach in Oklahoma State Football History — Actually Any Good? 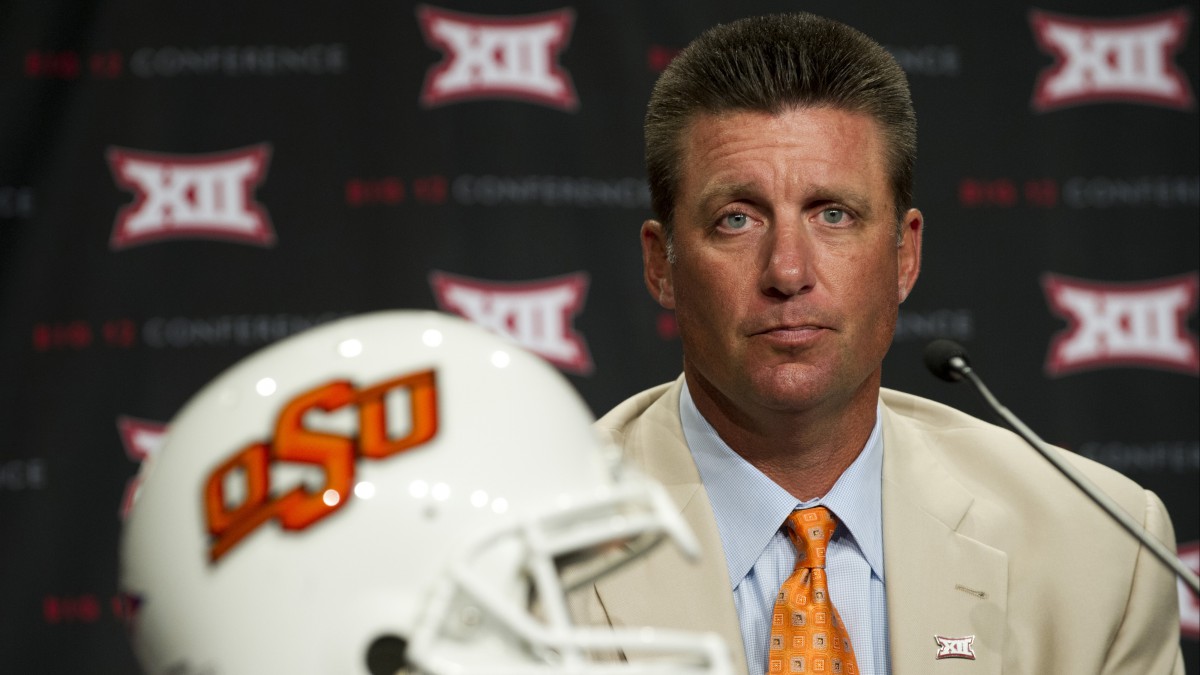 Oklahoma State has a terrible football team. I say this without bitterness, even though I’m a lifelong fan. Sometimes you’re going to catch a bad season. This is not, God knows, the first smoking meteorite of subpar football ever to crater in Stillwater. We’ve had practice with this. I’ve cheered for Oklahoma State teams whose defensive issues started at the level of cell division. I’ve watched orange-clad wide receivers emit actual boinging sounds as balls ricocheted off their tiny, useless hands. I’ve seen game plans that made Barry Switzer — Barry Switzer! — look like the sort of subtle tactical philosopher who reads Sun Tzu and knows when to castle in chess.

So this year’s 5-5 team, which rides a four-game losing streak into season-ending blowouts-in-waiting at no. 7 Baylor and no. 21 Oklahoma, is a punch I know how to take. Still, though — it’s been a while. Over the last decade, Oklahoma State, funded by the oil billions of megadonor T. Boone Pickens, has emerged as one of those sort-of-top-tier teams that the NCAA occasionally throws up before the establishment rallies to mow it down.1 Eight straight winning seasons, a conference banner or two, a BCS title game near-miss in 2011, and a lot of garish offensive statistics will reset your expectations a little. It’s gotten easy to think of “disappointment” as something like “a spectacularly ill-conceived Sports Illustrated exposé whose sensationalized scandal-nannying betrayed an unwillingness to advance the critique of college football past 1988” rather than, you know, actual losses. It turns out those sting, too!

Oklahoma State’s turnaround arguably started under former head coach and current pride of the bayou Les Miles. But it’s Mike Gundy who’s been the face of the program during its rise. It’s Gundy who’s won over 65 percent of his games — not a Sabanesque figure, but one that’s dragged down by a first season during which the Cowboys went 1-7 in conference play after he expelled 11 players. It’s Gundy who’s led the team to bowl games in eight straight seasons. It’s Gundy who sent Dez Bryant and Justin Blackmon to the NFL. It’s Gundy who waxed Oklahoma and took OSU to within a bent carpet fiber of the championship game three years ago. It’s Gundy who gave what, on an absolutely loaded list, stands out as maybe the second-most impressively batshit football-themed press conference of the 2000s2 — the great “I’m a man! I’m 40!” rant of aught-seven, when Gundy waved a newspaper and berated the media for, more or less, destroying modern society at a root level. Which, guilty, whatever.

And really, even looking past his tenure as head coach, Gundy’s had a hand in just about every successful Oklahoma State micro-era of his adult life. He was the quarterback for the great Thurman Thomas/Barry Sanders teams of the late ’80s. He was the offensive coordinator under Miles, when the program started its long crawl out of mediocrity.3 Based on his record alone, it’s not a huge surprise that Gundy opened as the bookies’ favorite to step into Will Muschamp’s weirdly bellowing and overintense shoes at Florida. Based on his record alone, you’d think Oklahoma State fans would be desperate to keep him, regardless of this season’s mess.

HAHAHA WELCOME TO COLLEGE FOOTBALL, FRIENDLY SPACEMAN. I’ve been spending some time back in Oklahoma lately, and let me tell you — “desperate to keep Mike Gundy” is not a descriptor I’m encountering much in the wild. Tentatively willing to defend Mike Gundy, maybe. Piping up from the back to slip in a lukewarm thought about Mike Gundy, sure. Raring to strap Mike Gundy onto a circus train and ship him to Bismarck, quite often. But the only live desperation I’ve spotted was in the eyes of our offensive linemen last weekend against Texas.

Some of this has to do with the usual college-football drama. It’s hard for a fan base and a coach to coexist for 10 years without resentments accruing on both sides, and those resentments tend to rise along with the number in the L column. Gundy flirted pretty hard with the Tennessee vacancy a couple of years ago; this annoyed people at the time and is now portrayed as a striking act of disloyalty. And Gundy has responded to criticism by going into a full peevish-stoic sulk. “I shall stay the way I am, / Because I do not give a damn,” Dorothy Parker wrote; Gundy will stay the way he is because hey, y’all, look here, he’s not gonna come out and answer a bunch of danged critics, and it’s not his goshdang job to sit around and worry what people think. He’s a man! He’s 47! Get over it.

This is all pretty standard opera in NCAAville. What’s a little weird in this case is that there’s a reasonably persuasive argument that Gundy really isn’t the architect of his own success — that he’s been propped up by the administration and assistants at just about every turn in his career, and that things have gone worse for the Cowboys the more he’s been calling the shots. Consider:

1. That period as Miles’s offensive coordinator. Gundy was given this role after Miles beat him out for the head-coaching job; it’s not clear that Miles wanted him or that Gundy actually exercised much influence over the offense. Which strengthens the theory that:

2. He was named head coach after Miles left because Pickens liked him, not because he was the most qualified or experienced candidate. In other words, he was a concession to the need for fund-raising, like an NPR tote bag with a headset, not someone who was expected to do the major work of building a winning team. Which is to some extent supported by the fact that:

3. He’s had a string of excellent assistants, including current UNC head coach Larry Fedora and current West Virginia coach Dana Holgorsen as offensive coordinators. But while his assistants have placed their own strong stamps on the program, it also seems to be the case that:

4. None of them learned much from Gundy, and none of them was formed by his leadership in any particular way. There’s no Coach K–ish cult of junior Gundyites at work in the world, which is vaguely astonishing considering that no fewer than four of his ex-assistants are now head coaches in their own right. Gundy’s coaching tree is more like a coaching throughway, which is more telling when you consider that:

5. Gundy stopped calling plays for the Cowboys when he hired Holgorsen in 2010; he portrayed this stepping back as part of his maturation as a coach, but the rumor has always been that it was mandated by OSU athletic director Mike Holder, and that Gundy bitterly resented it. Which in turn backs up the rumor that:

6. Gundy spent years chafing against the control of the athletic department,4 finally demanding a bigger contract (after Holder signed Travis Ford to a long-term contract to coach the basketball team) and progressively more power to run the program without input from Holder and Pickens. However:

7. Since Gundy achieved the autonomy he wanted, the program has been marked by some, uh, unconventional hiring decisions — offensive coordinator Mike Yurcich was previously employed by Division II Shippensburg University of Pennsylvania5 and offensive line coach Bob Connelly was a high school coach in Arizona when OSU came calling. It’s also been marked by:

8. Internal strife, such as the lawsuit-crazed departure of former offensive line coach Joe “Wick” Wickline for Texas in 2013. As well as:

9. The sort of talent evaluation that has somehow produced this year’s overmatched team, with its anemic offensive line, which has given up 12 sacks in the last two games, and deteriorating quarterback play from junior quarterback Daxx Garman, whose completion percentage ranks last in the Big 12. In fairness, the Cowboys have the youngest team of any school in a Power 5 conference, and they have been hit hard by injuries, including a season-ending broken foot for original starting quarterback J.W. Walsh.6 However:

10. They seem to be getting worse from week to week, not better, to the point that fans are openly debating whether the team has quit on the coaches (never a great sign). It’s gotten so bad that:

11. Pickens essentially called Gundy out in public last week, answering a question about whether he supported Gundy by saying, “I’m always going to be for OSU. I don’t care who coaches ’em.” Gundy responded by affecting a sublime indifference to Pickens and his thoughts, thus torching the original rationale for hiring him in the first place — his close relationship to the school’s biggest donor — and violating the first rule of football coaching: Never escalate a feud with a billionaire.

12. You know what this list is full of? Rampant speculation, message-board gossip, and a grotesque anti-Gundy bias.7 But it’s what people are muttering, and the through line is at least sorta persuasive, isn’t it? Like a great political insult, it lands because it seems to suit something people instinctively sense about its target — in this case, that Gundy is in a little past his depth, that he’s a little clued-out, and that he’s just vain enough not to realize it.

At the same time, though? He’s the most successful coach in Oklahoma State history! He legitimately could have won a national championship! If one bad season sends us scrambling to forge a Gundy-as-loser narrative, shouldn’t all of those years of winning make us do the opposite? If we’re going to make him solely responsible for the losses — well, hi, first-time long-time here, but he has to get some credit for the wins, too, right?

And that’s where we are with Mike Gundy in 2014. He’s a hugely successful coach who may well stink at his job. He’s a credible candidate for the vacancy at Florida and also someone who quite possibly isn’t qualified to stay on at Oklahoma State. There have been great poets who couldn’t spell; Gundy might have managed to write a brilliant sonnet while simultaneously lopping off his hand with the pen. What’s an Oklahoma State fan supposed to hope for?

Gundy’s contract runs for (quoting from memory, but I’m pretty sure I’m right) 750 more years and around $30 billion, so he’s functionally un-fireable for the moment. He could choose to leave, or Holder and Pickens could force a shakeup while keeping him in place, or, I don’t know, they could do something totally crazy, like trust him to figure it out.8 Gundy is a funny reminder, though, of how little we often know about correlation and causation in sports. We make bullet lists like hard-eyed experts, but don’t coaches sometimes seem to function like Lisa Simpson’s magical anti-tiger rock? How does it work? It doesn’t. But you don’t see any tigers around, do you? Gundy was the first rock in OSU’s modern history to keep the tigers away for any length of time, and personally I hope he’s still on the sideline next season. One mauling is inconclusive; I need to be attacked by at least a few tigers before I learn my lesson.

Just Win, Sort Of: How the Raiders Took Down the Chiefs