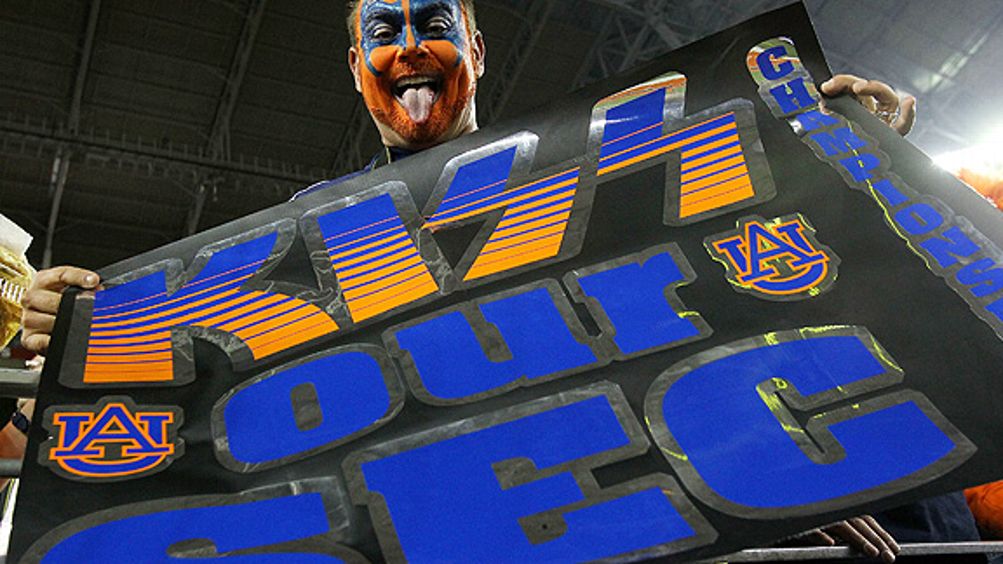 When I first heard the chant, I was sitting in the Rose Bowl with a Mangino-sized scowl on my face. My Texas Longhorns had gotten their legs (and arms) broken by Alabama. Crimson Tide fans — thousands of them in white button-downs and khaki pants — were hugging each other and laying their cheers on us: “We’re gonna beat the hell out of you!” That’s when I heard the chant. “S-E-C! S-E-C! S-E-C!”

These guys cheer for the whole conference? Yup, they do. As the Tide and their pals won five straight national championships, something happened to modern SEC fandom. The SEC fan roots for his school, of course. But he also roots for his conference, and, in an interesting, New South kind of way, his whole region. The thing historians used to call southern exceptionalism — and its first cousin on its mother’s side, southern solidarity — has been channeled into a football fight song. Chanting “S-E-C!” is the last polite way to root for the South.

Listen as “S-E-C!” rings throughout BSC-dom. Oregon got a chorus from LSU Tigers fans Saturday night — a sequel to the SEC chant Auburn fans laid on them at January’s title game. LSU players chanted it at Ohio State after the 2008 title game; Florida Gators fans chanted it at the Buckeyes in 2007. Proving everybody can taunt somebody, Kentucky gave the “S-E-C!” to East Carolina at the 2009 Liberty Bowl. SEC pride has outgrown football. “You can imagine how grating it is when you hear the SEC chant all the time,” a woman named Valorie Kondos Field remarked last year. She is UCLA’s gymnastics coach.

After the national championship each year, the SEC fan rushes to message boards to make sure the three magic letters have been uttered. “No SEC chant Bama?” an LSU fan wondered after the 2010 title game. The next year, it was up to a Bama fan to ask, “Did Auburn do the SEC chant?” The South’s football teams can whip anybody — this the SEC fan knows. But he worries his neighbors will forget to remember to rub it in.

How’d we get here? It all starts with the Civil Wa… I know, I know, but, trust me, this story gets more interesting than that. After the final gun sounded on Reconstruction, northern schools had a jump start on their southern counterparts in football. (A typical score from 1890: Princeton 115, Virginia 0.) Religious critics in the South argued against the “football craze” because it was unsafe, immoral, and fundamentally a Yankee thing. To counter that, the South’s colleges began the “southernize” the game. The bands played “Dixie.” LSU’s Tigers were named after soldiers who fought in the Civil War.

The phenomenon of southern football swagger probably dates to the 1926 Rose Bowl, when Alabama faced off with Washington. This was an accident: Alabama was invited only after several teams declined. “I’ve never heard of Alabama as a football team,” historian Andrew Doyle quotes a Rose Bowl agent as saying. But after the Tide’s three third-quarter touchdowns won the game, they became symbolic champs for the whole South. Auburn students gathered on campus to follow the game — even though Auburn and Alabama had stopped playing each other due to mutual loathing. “Alabama,” Vanderbilt’s coach cheered, “was our representative in fighting for us against the world.”

That sounds a lot like the spirit behind the SEC chant. And as historian Michael Oriard has shown, every South-versus-North matchup thereafter became a fantasy football Civil War. “The Georgians might have been charging up the slope at Gettysburg again,” one sportswriter squealed after UGA upset Yale in 1929. When a southern team knocked off a northern foe, it was said to have exacted revenge on the Yankees. If the South lost, well, let Grantland Rice tell it: “It was a magnificent charge in a lost cause. It was Pickett at Gettysburg. It was an outclassed team, physically, giving everything it had.” That lede should have been burned along with Atlanta.

For a long, terrible period, the South’s football pride manifested itself as racism. Football became a blocking scheme to protect Jim Crow. “The South stands at Armageddon,” Georgia’s governor declared in December 1955, when an integrated Pittsburgh Panthers team was set to play in the Sugar Bowl. (They played anyway.) Southern teams refused to play integrated squads even in the north; they segregated their home stadiums. When judges struck down the segregationist laws, many SEC schools kept their squads all-white anyway. It took Bear Bryant until 1970 to recruit a black scholarship player.

By the 1980s, the SEC boasted national champs, NCAA sanctions, and bumper stickers that read “Herschel Walker Is My Cousin.” But there was still no SEC chant, no conference-wide brotherhood. “I don’t have a recollection of anybody caring about anybody this way,” says Paul Finebaum, a Birmingham sports radio host.

What happened? First off, the SEC just got really, really amazing. SEC schools won the past five BCS titles, showing not only the conference’s quality, but its deep bench. The old “southern inferiority complex” became the rest of the nation’s. Now, college message boards whine that the media are hopelessly biased toward the SEC. ESPN and Rivals.com are accused of handing out Heisman hype, a boost in the recruiting rankings, and a mandatory slot in the BCS title game.

Structural factors nurture SEC fandom. CBS broadcasts nationally televised SEC games every Saturday rather than regional games, giving the conference a gather-’round-the-flat screen experience. Moreover, the SEC maintained its geographic identity as other conferences have lost theirs. Before next year’s likely addition of Texas A&M, the SEC’s last two invitees were Arkansas and South Carolina.

The hosannas once heaped on southern warriors are now heaped on southern football players. They’re faster than anybody else, or so we hear. Last January, after Nick Fairley pushed over Oregon linemen with his pinkie, they became physically stronger, too. “The difference in this league and all the other leagues is defensive linemen,” Florida’s Will Muschamp told an Alabama paper this summer. After finally beating an SEC team in a bowl game this year, Ohio State fans — told for years their guys were slow, wussy, etc. — mounted a mock SEC chant.

In the new SEC, it is NCAA compliance officers who are the carpetbagger bad guys. They’re taking away what’s ours… Last year, the NCAA came for Cam Newton and came away with Cecil. Now agents are circling Baton Rouge after learning of LSU’s payments to alleged Texas street agent Will Lyles. “Hating the NCAA is one of the things that binds the SEC together,” says Harvey Jackson, a history professor at Alabama’s Jacksonville State University.

As the New South gets newer, there’s an urge to embrace old things. Blue-collar comedy. “Real” country music. A unified Dixie that beats its chest and does the moonwalk. Yet society has evolved to the point (thank goodness) where this urge can no longer manifest itself as a Lost Cause, a segregated Sugar Bowl, or a mascot named Colonel Reb.

When the SEC started winning national titles, it rebranded southern pride for the 21st century. “For southerners that like to have solidarity,” says Jackson, “football gives us a place where we can do it and can’t really be criticized for it.” The SEC chant is galling not only because it’s right on the merits, but because, for once, it’s politically correct.

Texas A&M fans have declared their school is going to “SECede” from the Big 12. But is A&M a good cultural fit for the SEC? I put the question to the radio host Finebaum. “No,” he says. “Not at all. It feels like Mississippi State West.”

The Aggies argue they’ll grow the SEC’s “footprint” and build recruiting wagon trails into Greater Houston. The problem is they’re a slap in the face to SEC pride. Texas A&M — with a lone AP national title in 1939 — isn’t any good. “Aside from the fact they’re ranked high right now, they have sucked for as long as I can remember,” Finebaum says. “Wasn’t somebody else available, like Oklahoma or Texas? Someone that matters?”

The tight-knit southernness the conference has nurtured is being threatened by …Texanness. As Finebaum puts it, “This is a fraternity, OK? I don’t think the upper echelon of the fraternity — which would be Florida and Alabama — are going to be real happy about a bunch of cowboys showing up at a rush party.”

For the first few years, A&M likely will be only a part-member of the SEC. Sure, it’ll get a Saturday slot on CBS and the right to an annual beatdown at the hands of Alabama. But it’ll stand outside the New South winner’s circle the SEC has carved out. It’s a nightmare, believe me. As a college football fan, there’s nothing worse than hearing “S-E-C!” and realizing, with a mix of hate and envy, that they’re not talking about you.