Adam Silver, Among His People, at His State of the League Press Conference 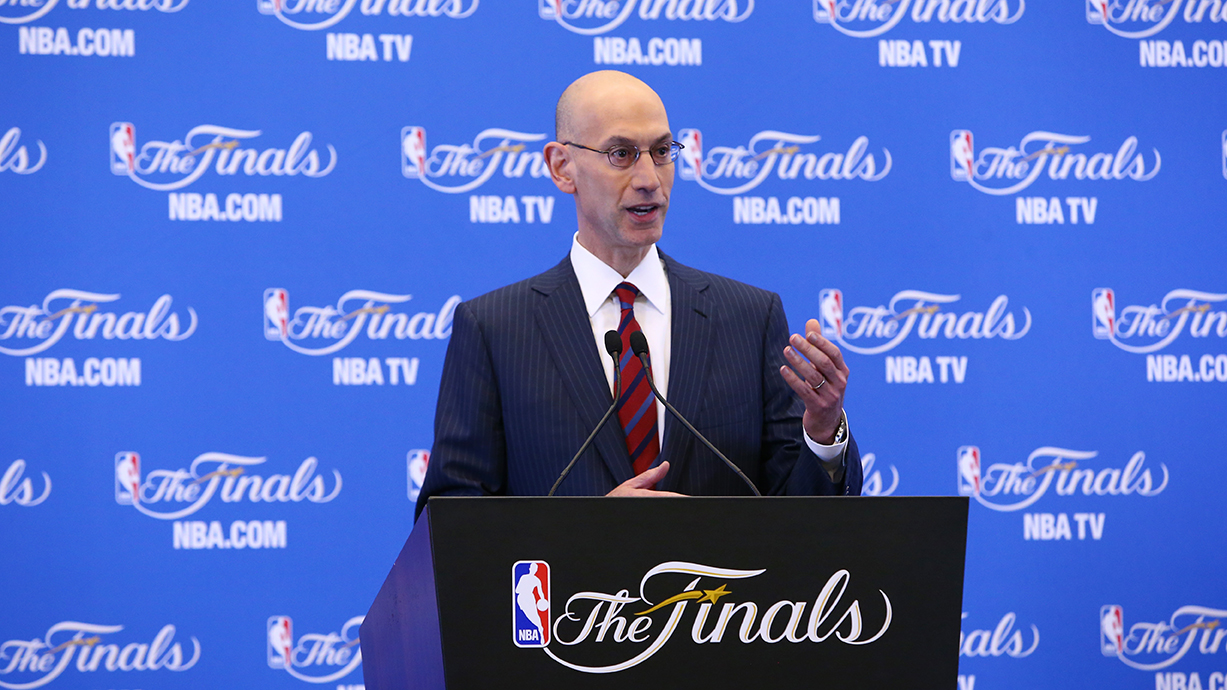 Adam Silver was smiling when he arrived at his biannual state of the league press conference last night. By contrast, at the Super Bowl, Roger Goodell wore an antacid grimace and walked out to the opening strains of “The Imperial March.” Silver is in his honeymoon phase with the press. To hear the questions he was asked and the answers he delivered, the NBA is great. Just great. Though Silver would like to see more data before he says for sure.

Silver was giddy, almost nervous at first. He called players by their first names (“You have Kyrie, you have Klay”) and offered, “I watch a lot of college ball.” He saluted the analytics movement, the “great piece” LeBron James wrote with Lee Jenkins. This is what’s likable about Silver: He talks with the same chipper nerdiness as your favorite NBA writer. I can’t think of a sports commissioner who has been as good a cultural match for his press corps since Pete Rozelle in his early, scotch-drinking years.

To hear the reporters’ questions, the league’s problems are few and minor. Rusty Simmons of the San Francisco Chronicle asked about concussions. Silver was concerned but said the Steph Curry and Klay Thompson bumps were “fluky.”

CBSSports.com’s Ken Berger asked about the seeming uptick in injuries. While admitting his data set was limited, Silver said that injuries hadn’t gone up. It was just that better players (see Kevin Durant) had gotten injured.

Like Al Gore and Barack Obama in their technocratic primes, Silver felt most comfortable when he could pummel us with data. He delivered a long, wonky answer to USA Today’s Jeff Zillgitt about hack-a-Shaq. Zillgitt hadn’t really asked about hack-a-Shaq. Silver offered the same data richness when he talked about rejiggering the draft lottery, which Zillgitt did ask about. In both cases, Silver wanted to “park” any rule changes for a year until he could get even more data.

State-of-the-league press conferences tend to be depressingly local. Silver got three questions about new arenas (two about Oracle Arena, site of the Finals) and the mandatory “Mr. Silver, look over here!” questions from foreign writers. A Russian journalist asked a question longer than his country’s national anthem, the point of which was that the Finals weren’t being televised in Russia. “First of all, thank for you being here, given … there’s a low amount of interest back home,” Silver said to laughs.

Most telling was the venue. Silver spoke in a cramped room at the neighboring O.co Coliseum. The crowd was about one-twentieth the size of the one that attended Goodell’s press conference. Industrial carpet was held to the floor with black tape. Exposed pipes ran along the ceiling. There were perhaps half-a-dozen TV cameras. “Just look at the size of this room,” Silver said at one point.

For all its conquer-the-world rhetoric, the NBA is still a small, leaky canoe next to the NFL’s Carnival cruise liner. A showdown with Michele Roberts and the National Basketball Players Association is around the corner. Silver’s halo will be dented from that or from discipline issues. But for now, we are in a bubble in which the NBA not only seems cooler than the NFL, but morally superior to it. “It’s been a wonderful season,” Silver gushed. When he walked out of the room a half-hour later, he was smiling from ear to ear.

The Dubs Have It: Taking in Game 1 From Oakland