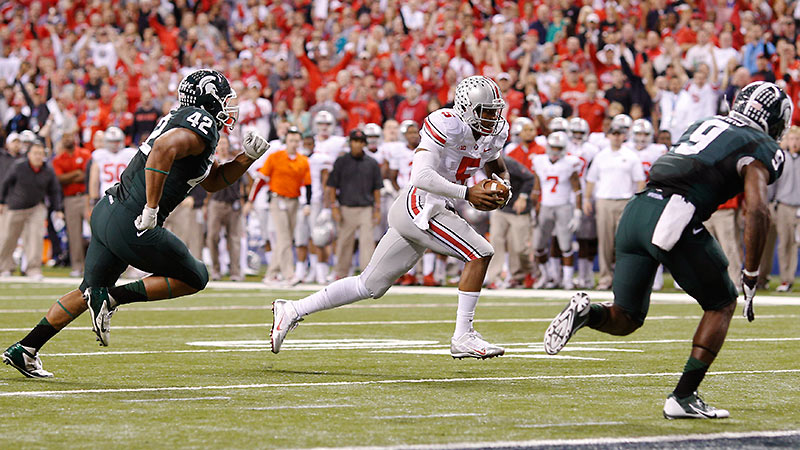 Join us as we take a tourist’s glance at the nebulous between-world of spring football, so often neither footbally nor springy. Previously: the ACC, SEC, Big 12, and Pac-12. This week: assorted offseason story lines from the Increasingly Inaccurately Named Big Ten …  for real this time. (Anya: Call us.)

Who All Is in the Big Ten This Year?

Maryland and Rutgers join the Big Four-and-Ten for 2014, making the task of creating a useful mnemonic borderline impossible. Indiana, three of the M-schools, Ohio State, one P-team, and Rutgers are in one division, while the other two I-schools, the remaining M-team, both Ns, another P, and Wisconsin are in the other. The conference has mercifully created geographic divisions that are probably the best method short of flash cards for remembering who’s where; all (“all”) you have to do is draw a squiggly line through Lake Michigan that lops off part of Indiana, then remember that Purdue goes on sort of a divisional peninsula to keep it in the West, with Indiana and everything else east of the lake going in the East.

For every veteran receiver the Illini lost in the transition from 2013 to 2014, and there were plenty, it seems there’s an unproven but interesting replacement lurking in the wings. Four to track: Senior Martize Barr, who produced sparingly in 2013; true freshman Mike Dudek, who drew first-team reps in spring ball; promoted walk-on Peter Bonahoom, who recorded 95 yards’ worth of catches in the spring game; and juco import Geronimo Allison, a former Iowa Western Community College teammate of Barr’s.

One defensive position development to watch: the ends, with Tim Kynard out of eligibility and Houston Bates transferring. Keep an eye out for another hyped incoming juco transfer here, Jihad Ward.

The Hoosiers were our kind of team in 2013, and we mean that sincerely: They delivered points by the bucketload, both for and against, ranking 16th among FBS teams in points scored and 114th in points allowed. While we would be content to watch this kind of game forever, Indiana is explicably trying to erect some kind of defense, with the help of former Wake Forest DC (and even-formerer Ohio Bobcats head coach) Brian Knorr, who’s flipping the Hoosiers from a 4-3 to a 3-4. Where, then, to find a legit nose tackle? BTN likes these two big sophomores.

Iowa is, at the time of this writing, overstocked with running backs. We are just as perplexed by this as you are. We are not going to say any more about this right now out of a deep-veined fear of drawing the attention of you-know-who, but wish the Hawkeyes the very best of luck at avoiding Its dreadful gaze.

Maryland: Slowly, Steadily, Like Turtles (Get It?), Terps Healing

Happy news regarding one of 2013’s grimmest days: Receiver and return threat Stefon Diggs and fellow receiver Deon Long, both of whom sustained broken legs in the Terps’ mid-October loss to Wake Forest, are up and about and doing football-related activities, though the pair was limited in spring work and sidelined for the spring game itself.

A sky-high stack of questions surrounds the 2014 Wolverines, at an inconvenient time for uncertainty in the Brady Hoke era. (Ask your friendly neighborhood Michigan Man, though, and he’ll be the first to tell you grim hope is a fine character builder.) Michigan returns the majority of its starters off the 2013 squad, but the missing names are names you know: Jeremy Gallon, Taylor Lewan, Fitz Toussaint. Uncertainties lurk at receiver, where Gallon’s off trying to get drafted and tight end Jake Butt is sidelined indefinitely with a torn ACL; offensive line, which lost two starters out of a group that didn’t have a shining record to begin with; and all over the place on defense, with multiple jobs along the line and in the secondary open for competition and linebackers being shuffled about. (We’re not including Hoke opening up Michigan’s quarterback race during spring ball; Devin Gardner had his moments and his MOMENTS in 2013, but this competition struck us as just a little bit goofy.)

Newcomer to watch: Hatchling receiver Freddy Canteen has received glowing reviews and made a standout catch in the spring game.

Returnee to watch: Given the spotty ranks at receiver and Butts’s injury, the player we’re most interested in seeing develop further is tight end (and category tag inspiration) Devin Funchess.

Michigan State: The ’Duzz is Loose

It feels sort of insulting to call Michigan State’s 2013 campaign a breakout year, but it sure felt like one, even given the Spartans’ recent penchant for 11-win seasons. Maybe it was the delightful Rose Bowl experience, MSU’s first trip to that hallowed game since 1988. Maybe it was the Spartans getting to the Rose Bowl after having an undefeated season cruelly snatched away by pass interference calls (we have no ties of any sort to East Lansing and are still upset about that Notre Dame game). To call the Spartans breakout stars makes them seem unnecessarily plucky, and plucky they ain’t. (Weren’t. Wain’t?) You don’t say a defensive extermination machine has moxie.

Pat Narduzzi’s siege engine is missing some burly cogs this spring, including Darqueze Dennard and Isaiah Lewis in the secondary and Max Bullough and Denicos Allen at linebacker. Names to watch in the effort to replace that production: Taiwan Jones, who’s moved from the weak side to Bullough’s slot, and Darian Hicks, who’s sliding in for Dennard.

Right, football: They play it here! Nebraska is not just cats! Despite the impression we ourselves might have given!

One key offensive question is how a sure thing (Ameer Abdullah, returning for his senior season to follow up his 1,690-yard, nine-touchdown rushing output in 2013) will function behind a largely unsure thing (the Huskers’ offensive line, which lost four starters). Defensively, watch the maturation of a young group of defensive backs, a position that lost three starters and is playing under new position coach Charlton Warren. There. Football things!

The Buckeyes enter 2014 sans six former starters (and with another returning starter sidelined by injury until summer), and you probably know just about all of them: Cannonball runner Carlos Hyde. Offensive tackle and well-regarded draft prospect Jack Mewhort. Prolific receiver Philly Brown. American hero Marcus Hall, honored in this space as an Athlete of the Year.

There are major playmakers returning on offense, Braxton Miller and Devin Smith chief among them, but they’ll have to work behind an almost entirely rebuilt offensive line, and they’ll have to do that without Hyde, whose importance to last year’s attack cannot be overstated, either when Miller was healthy or when he was sidelined. Leading the charge on the ground in the Buckeyes’ spring game, for whatever spring games are worth: true freshman Curtis Samuel and redshirt sophomores Warren Ball and Bri’onte Dunn. (And in for Miller in that spring game, Cardale Jones, author of our favorite college football tweet of all time.)

This feels pat because it is pat: It’s the depth, dummy. NCAA-levied sanctions cast reverberations that the Nittany Lions’ roster will feel for years to come, and, right now, those depth issues are directing recruiting, affecting practices, and throwing echoes around at the team’s most storied position. Every team has these issues. Penn State just has lots of them. Fin.

This is not meant to be a bleak outlook, so take heart: (1) Shallow depth means playing time for lots of young guys. (2) At lots of different positions. (3) Christian Hackenberg, whom we like around these parts, is back(enberg), and he’s one of the most captivating quarterbacks in the game. (Now, if that line can just keep him upright.) 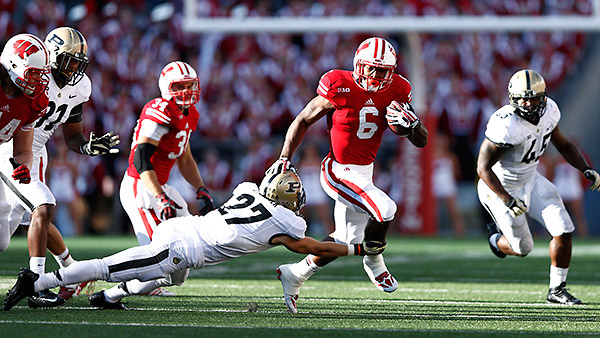 Who’s That Guy is an orientation tool used for navigating college football’s vast landscape, and is filmed in front of a live studio audience.

Where Is He From? Glassboro, New Jersey.

Years Played: A rising second-year player, Clement saw action in 12 games as a true freshman in 2013.

Follow the Bouncing Ball: In Wisconsin’s case, it’s more like a thudding ball. Or in recent Badger history, more like a rack of wooden Skee-Balls, rolling smoothly into place whenever another one is removed and flung toward a goal. The 2012 Badgers were led, of course, by Montee Ball, who recorded a 356-carry, 1,830-yard, 22-touchdown campaign in his final collegiate season, with James White and Melvin Gordon trailing at 125 carries for 806 yards and 62 carries for 621 yards, respectively. In 2013, with Ball off to the Denver Broncos, Gordon assumed control of the Badgers’ Cerberus attack, carrying 206 times for 1,609 yards, chased by White’s 221 carries for 1,444 yards (White also put in some considerable yards receiving) and Clement’s 67 carries for 547 yards.

This season, with White off to the draft, Gordon has elected to return to college ball despite a second-round projection, and Clement is the heir apparent for the no. 2 slot. He’ll be operating behind an offensive line that returns a wealth of starting experience.

Video Highlight: Yards gained against Purdue are still yards, even in the late stages of a blowout:

Social Media Presence: He can be found anxiously awaiting the turn of the seasons on Twitter at @IMYEROC2YouRIng:

Feels like heaven outside for once down in Madison, feels like we just finally just got let out the freezer

Should We Know Him? Onlookers didn’t get to see much of him this spring, and he and Gordon were both held out of the Badgers’ spring finale, but it’s Wisconsin, where even a no. 2 back can rack up a 1,000-yard sophomore season. Stay tuned for the fall.

The Weekend Never Starts Around Here: The MLS Almanac