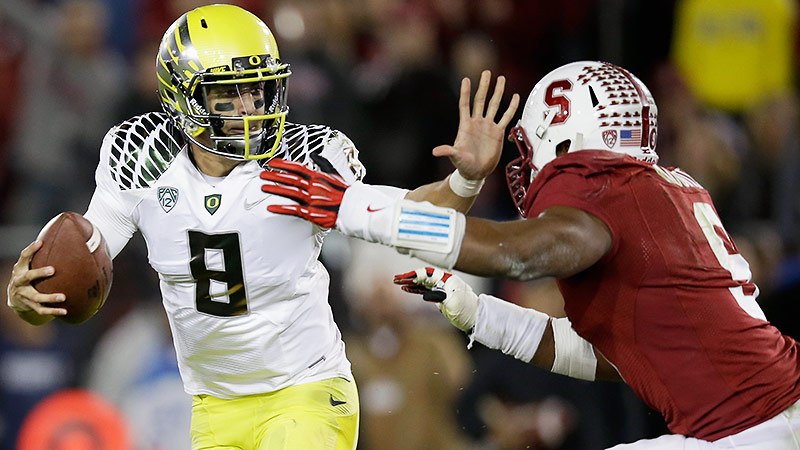 Join us as we take a tourist’s glance at the nebulous between-world of spring football, so often neither footbally nor springy. Previously: the ACC, the SEC, and the Big 12. This week: assorted tales and light reading from the Pac-12, which lost its BCS bowl and missed out on the title game last season, but whose members get to live in Pac-12 states, which means we can’t even make fun, so blinded are we with envy.

The 2013 teams return intact with no new additions, at least not until Larry Scott adds, like, Thailand (the whole country) to corner an unexplored media market.

Arizona: Look, We Made You a Fort

Is likening Arizona’s offense to an Old West stockade a flimsy excuse to repost this video of Arizona’s coaches dressed up like cowboys? It absolutely is, but the metaphor holds: Right now, the 2014 Wildcats are a solid, sturdy front with a lot of milling around behind the scenes. The offensive line returns four starters and a wealth of second-string talent; behind that bulwark, there’s a Ka’Deem Carey–shaped hole at running back and a five-way race for starting QB. (The Cats also retain the vast majority of last year’s receiving talent, making them the trusty, wide-ranging scouts in this scenario, or something.) You’ll probably recognize two of the guys gunning to be the next wildly prolific RichRod slinger: Longhorns import Connor Brewer and former Trojan Jesse Scroggins.

Is there anything more upsetting to a program like Stanford than having to replace four starters on the O-line?

Arizona State: The Devil We Know and the Devils We Don’t

The Sun Devils suffered major losses at running back and defensive tackle, with Marion Grice and Will Sutton off to try their luck in May’s NFL draft. We have an idea of what the next-gen rushing attack might look like for ASU, thanks (that’s not the word we mean, but you know what we mean) to Grice’s injury in last November’s UCLA game, which kept him out of the Territorial Cup, Pac-12 championship, and Holiday Bowl: during that span, sophomore D.J. Foster had 51 carries and 11 receptions for 447 combined yards of offense and five touchdowns. Then there’s the more nebulous matter of replacing the back-to-back Pac-12 Defensive Player of the Year honoree, along with most of his compatriots, but look for a better answer closer to the start of the season, when the Sun Devils get some key juco additions in the fold.

Oregon’s got a little bit of that Baylor thing going on this spring, where the team lost some big names to attrition — a De’Anthony Thomas here, a Josh Huff there — but we already know the guys who played behind them (your Bralon Addisons*) or outpaced the bigger names (your Byron Marshalls), because it’s Oregon. Plus, Marcus Mariota returning for another season of college ball still feels like a story in itself. Our weekly bout of getting-ahead-of-ourselves is already laser-trained on Oregon’s Week 2 visit from Michigan State. Defensively, the most compelling reload to watch is probably in the backfield, which sustained heavy turnover and will be under near-constant fire as a secondary operating in the Pac-12.

* Late-breaking bad news out of Eugene means we may not see Addison this season after all.

Oregon State: And You Again

There are lots of moving parts to puzzle over when wondering what the Beavers’ offense might look like in 2014: Sean Mannion returns in yet another upset quarterback retention, but with a new coordinator, and without the services of phenom receiver Brandin Cooks, but with Connor Hamlett and Caleb Smith, time is a flat circle, etc., etc., etc.

Whether Steve Sarkisian makes a change at QB or not, one endlessly captivating player to watch develop on the Trojans is receiver Nelson Agholor, who caught 56 passes to Marqise Lee’s 57 in 2013, and recorded 918 receiving yards to Lee’s 791. Agholor also led the conference in average punt return yardage, scoring twice.

Washington State: Has a Defense, Turns Out, Topical Joke, Ha-ha

No, for real, the Cougars do. So who’s going to replace Deone Bucannon? 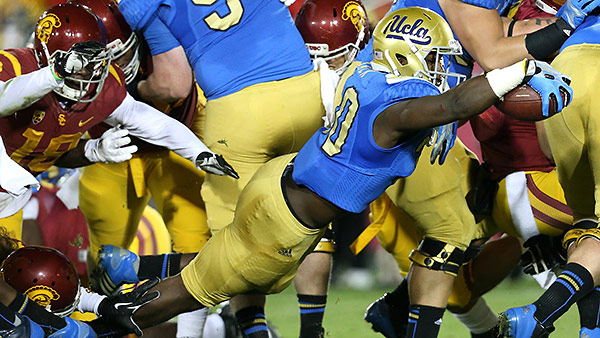 You’re lucky to be on the low end of the personnel turnover scale this spring. Where are you really homing in this spring, detail-wise, with so many guys returning in the same system?

We’re still a young team, but we have a good bit of experience, and that’s a real positive for us. And not having really any significant turnover amongst our staff is going to help us be more refined. Offensively, we’ve gone and evaluated our scheme, thrown some stuff out and added some new things, and we’ve really dialed in the details. Same thing on defense, with going back and really dissecting who we are defensively, looking at our personnel, and getting a little more exacting in terms of how we want to play the game.

Same question, but specifically in terms of Brett Hundley: At this stage in his development, where have you guys been making tweaks for him this offseason?

Big picture. You’re never going to get far away from the fundamentals and the details of the game at all, and he works very hard on those things, his mechanics and his drops, and his reads and his delivery and his motion, all those things. But what Brett is doing is learning how to best prepare himself for Saturdays, and what his week needs to look like. He’s really taken his understanding of our offense to the next level, how we protect up front, and how defenses are playing and where that leaves them vulnerable and how he can take advantage of that. It’s like he was — I don’t want to say he was Football 101, because he wasn’t, but he’s like Football 400 now. To me, it’s like he’s starting his graduate education.

On which side of the ball do you have Myles Jack doing most of his work in the spring?

Well, Myles is a linebacker. We recruited him as a linebacker; he came to UCLA because we were recruiting him as a linebacker. He had schools that wanted him as a running back. And he wants to play linebacker, and that’s what we want him to play. We think he’s a tremendous player who can have a huge impact on the game at that position. But you can’t deny the fact that he’s also, in my opinion, a great running back. The last thing we want to do is overburden him, put more on his plate than he can handle, but he’s also the kind of guy who’ll do anything for the team. Just like any of our players, we’re looking for ways to accentuate his skill set. You’ll see Myles play some offense, and you’ll see some other defensive players play some offense. We’re not averse to moving guys around as long as we allow them to home in and excel at one area.

What’s going to influence his usage more, the running back situation or the linebacker situation? Is one of greater concern to you right now than the other?

Boy, that’s not easy. You can’t just stick somebody in that spot and have them play to their level. It’s gonna be tough. We’ve got a great group of guys with big skill sets, and we’re creating a very competitive environment at both those spots.

We’ve been having all the coaches in this series drop a couple sleeper picks for this year. Anybody you’d like to offer up?

A cornerback named Fabian Moreau. Wears no. 10. I think this guy is special. My background is coaching DBs, and this is gonna be a big, big, big-time player. I don’t want his name out there, though, because typically when you’re talking about corners, you’re talking about guys that just got beat, or that have to make a lot of tackles. He’s a breakout player. Thomas Duarte, who’s a sophomore tight end/slot receiver, has a chance to be really special. And our left tackle, Caleb Benenoch, who ended up starting last year when we had three true freshmen on the offensive line.

We are not here to make fun of Colorado football. We promise you that so, so sincerely. We like Mike MacIntyre a whole lot, and admire anyone who’s willing to take on a program in a state of disrepair like the Buffs’. Colorado also has the best mascot in major college sports, an indisputable fact that is not up for debate. So when we post an excerpt from this story, please just know that it’s only because we are in stunned awe of just how much misfortune can rain down on a program over a given period of time:

Mike MacIntyre has added Trent Sessions to the roster. Sessions, a 6-foot-2, 195-pound sophomore, is joining the team as a walk-on after working as a member of the equipment staff last fall. He is a former high school quarterback from the San Diego area at Rancho Bernardo High School.[…] Head coach Mike MacIntyre and offensive coordinator Brian Lindgren were looking for another quarterback to add to the mix this spring after Connor Wood announced last month he was giving up the sport. Wood’s decision left CU with only two quarterbacks on the roster for spring practices. […] Five quarterbacks have left the CU program either to transfer to other schools or give up the sport entirely since the start of spring football last year.