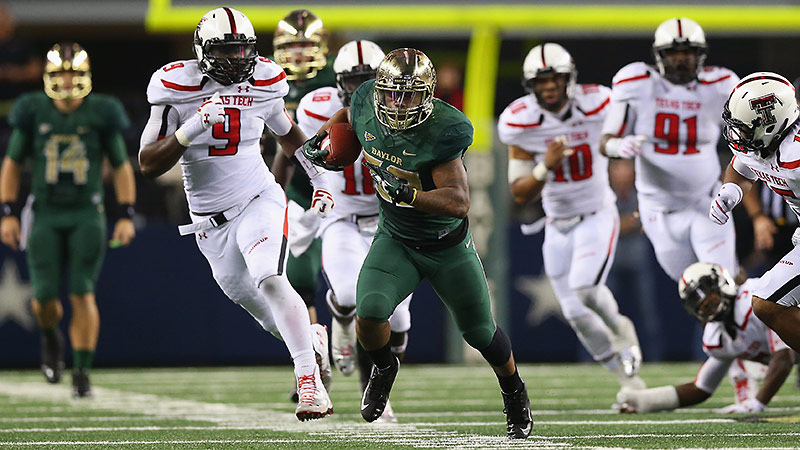 Join us as we take a tourist’s glance at the nebulous between-world of spring football, so often neither footbally nor springy. Previously: the ACC and the SEC. This week: the Big 12, which proved last season that it could compete with the best in conference lobster-pot cannibalism.

All 10 members of the 2013 cast return to the league that’s spiritually opposed to the Increasingly Inaccurately Named Big Ten.

Say, how are Texas and Texas A&M faring on their quest to pretend for all of eternity that they don’t want to do all kinds of over-the-clothes stuff to one another in a deserted romantic alley somewhere?

Baylor: The Lurking Breakout Bear in the Backfield

One of the most captivating aspects of an endlessly compelling Baylor program is watching what happens when skill guys go down. This is not, of course, to say we’re cheering for injuries, or that those injuries don’t eventually add up, but rather that the Bears’ silver linings are shinier than most. Watching Lache Seastrunk and Glasco Martin do their thunder-and-lightning act for a full season in 2013 would’ve been grand, but in their absence, we were treated to spectacles like third-string running back Shock Linwood’s back-to-back 180-plus-yard games against Oklahoma and Texas Tech. (That second game, you’ll recall, also saw the Bears’ fourth-string back, Devin Chafin, record 100 yards of his own. Baylor!) In 2014, with Seastrunk and Martin gone for good and Linwood the logical bell cow at the position, which guy we’ve never heard of will provide relief yardage in a moment of need? The early money’s on redshirt freshman Johnny Jefferson. One more aspect to watch this spring: how these guys and returning quarterback/human trebuchet Bryce Petty operate behind an offensive line returning only two starters.

There’s plug and play, and then there’s Mike Gundy’s mission this offseason, which is more of a “plug and plug” situation. The Cowboys lost a massive swath of senior talent off last year’s team, suffered further attrition in the offseason, and are currently dealing with health issues among several of the key players they do have back. Now what? (And not to get ahead of ourselves, except we’re totally about to get ahead of ourselves, but you do know who they get in Week 1, right?) The quarterbacking derby, where walk-on Daxx Garman is chasing J.W. Walsh, should be fun, but the real volatile action this offseason will be on a defense that returns just four starters, and specifically in a secondary almost entirely bereft of familiar faces. 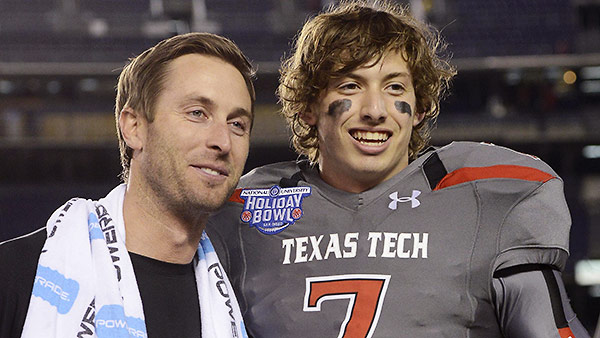 • Where Is He From? The exceedingly Texasly named Prosper, Texas.

• Years Played: One season with the Red Raiders, in which he started six games.

• Follow the Bouncing Ball: Heading into last season, Michael Brewer was Texas Tech’s presumed starting quarterback. Brewer’s injured back kept him out at the beginning of the year, and Kliff Kingsbury slotted in true freshman walk-on Baker Mayfield in Brewer’s place. Mayfield lasted until midseason before a knee injury knocked him out of the Kansas game, which is when we got our first good look at Webb. And the last time we saw him, he was throwing for more than 400 yards in the Red Raiders’ Holiday Bowl upset victory over Arizona State.

• Social Media Presence: On Twitter at @Davis_Webb7, spreading the gospel of the CW catalogue:

@Davis_Webb7 Got me watching PLL tonight!

• Should We Know Him? It’s Texas Tech. And again, the guy’s most recent performance, as a true freshman, was a 400-yard, four-touchdown affair. If you like pinball, you’re already hooked.

Oklahoma: The Machines. They’re Getting Smarter.

Here’s another team that went out on a note of postseason glory thanks to a stellar performance in a bowl game. [Editor’s note: If reading aloud, pause at this time for shouts of Yeah but Oklahoma ain’t played nobody, PAAAOWL wafting gently from the general direction of Auburn, Alabama.] Trevor Knight torched the oft-maligned Alabama Crimson Tide defense with a 348-yard, four-touchdown performance, and did so as a freshman, ensuring that we’ll get to mention this fact for years to come. (Blake Bell enthusiasts may follow his adventures at tight end.) But the thing that has us lighting candles in our Bob Stoops shrine is the coach’s claim that the defense, which allowed about 22 points per game last season and returns nine starters, is “light years ahead” this spring. Offseason race to watch: the three-way contest to determine who gets to step in for all-conference corner Aaron Colvin.

Texas: Things Are Different Now, Did You Know?

With Mack Brown retiring to spend more time with his Twitter feed, and with the Charlie Strong regime under way, there’s plenty new with one of America’s grande dame football programs, and we have but one wish: that someday, our children’s children’s children will wake up in a world free of Texas quarterback controversy. David Ash, whom we barely saw in 2013 because of his lingering concussion issues, is active this spring, but may find himself facing a challenger from without: USC quarterback Max Wittek, who’ll have two years of eligibility remaining wherever and whenever he decides to alight after graduation, has reportedly made multiple visits to Texas. A lower-profile but essential spring contest: the race to replace Anthony Fera.

West Virginia: What to Do With Those Wonderful Toys (and Who Will Throw Footballs at Them?) 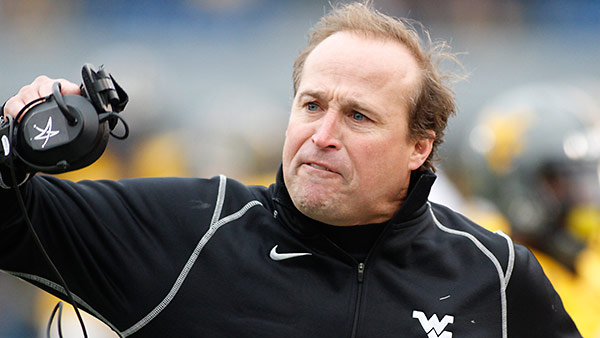 We spoke with Mountaineers head coach Dana Holgorsen at WVU’s pro day about last year’s injury streaks and inconsistencies, the effort to bend the laws of mathematics to create a five-RB set, this year’s skill player toy box, and another crucial quarterback race.

So how long before you get all those running backs [Dreamius Smith, Wendell Smallwood, Andrew Buie, Dustin Garrison, Rushel Shell] into one formation?

Well, I don’t know how we would right now. Joe Wickline and I were in that situation on a staff retreat when I was at Oklahoma State. We had Kendall Hunter, we had Joseph Randle, we had Jeremy Smith, and we had a good fullback. We had Justin Blackmon and Hubert Anyiam on the outside. And we were saying the same thing. So that’s when we got together and we literally drew it up on a napkin. Quarterback with two backs there and one back there. The diamond formation.

But no, the backs look good. Charles Sims over there was a phenomenal back for us, but Dreamius Smith is going to take his place, and he looks good. He’s lost weight, he looks quick. He’s improved his ball skills. [Shell], you know he came in overweight. He knew he wasn’t playing [last year], so he didn’t do much. But over the course of four months, he’s really got himself in shape. Still kinda learning the offense, but brings a little more of a power run game to us. Wendell Smallwood looks really fast. He’s skilled like Charles; he can be a receiver. Probably hits the hole and goes faster than any of ’em. You got Buie, you have Garrison, guys that’ve played before.

Do you have a target date for quarterback Clint Trickett’s return, and who’s been standing out in his absence?

[Trickett] had shoulder surgery back in January. Dr. Andrews, down in Florida, repaired a slightly torn labrum. The thing with him, in fighting the celiac disease, is he’s always had a problem with his body, with his weight, so he’s got one more year and he wants to be as good physically as he can possibly be. So he’s sacrificed the spring to get himself to where he’s 100 percent when we come back off of the break. He comes back May 21, so we’ll be able to practice with him and teach him and all that stuff all summer.

Skyler [Howard]’s taking the majority of the reps right now, and is catching on good. Paul Millard knows the offense better than anybody. And then William Crest will be here about the same time that Clint gets back. He’s a multi-purpose guy, 6-2, broad shoulders. He’s young Geno [Smith], is what everybody calls him. So throw him into the equation, and we’ll see which one comes out on top. Looking forward to one of them taking control.

What are you looking for out of Mario Alford now that he’s finally found a position home at receiver?

It was part of what we were lacking last year. The majority of the year, all six skill kids, whether it’s the two running backs, the three receivers, or the quarterback, all six were first-year players, were not in the program the year before. Mario didn’t join us until August, and we didn’t know what Mario was. We tried to use him like we used Tavon [Austin] in the backfield, put him in the slot. He got hurt and missed three weeks of camp, and just never got a grasp of the offense. So we finally moved him to the outside, and that’s where he was naturally very comfortable. [Laughs.] Oh man. We finally figured out what position he was. Whether we should’ve been able to figure that out earlier, that’s nobody’s fault. You get here in August, it just takes time to figure out what you got. He feels extremely comfortable right now; he’s fast, and he understands what to do. I would look for a whole season of [what he did in] November. The whole season should look like that for that kid.

He’s wearing a bunch of hats. We’re fortunate to have him. This is only the second place that he’s ever been. He’s primarily in charge of the D-linemen. Ours have underachieved, and we’ve got young guys that need to be coached. He’s also going to serve as a mentor to [defensive coordinator] Tony [Gibson], and he’s helping me with some head coaching stuff as well. It’s no secret that he was kind of the main figurehead there at Penn State for a while. He’s able to do whatever you need him to do.

Who are your sleeper picks for spring?

I tell you, Wendell Smallwood looks really good. What Charles Sims did for us, from a running and receiving perspective, is what Wendell can build. Wendell on offense, and probably K.J. Dillon on defense. K.J. kind of has an outside linebacker/safety-type body, very active, and right now is probably our most disruptive guy.

Devotional: What Keeps Holgo Up at Night?

Holgorsen on the findings of the CFBMatrix report on pace of play and snaps lost to injury: “It’s not shocking to me. When you wad [players] all up in there — put it this way: When I’m at a practice, the one period where I hold my breath the entire 10 minutes is our inside period. When all those bodies are coming down and they’re just knocking the crap out of people and there’s eight people on the ground? That’d be the one period I hold my breath and go, ‘Ohhhhhh boy.'”