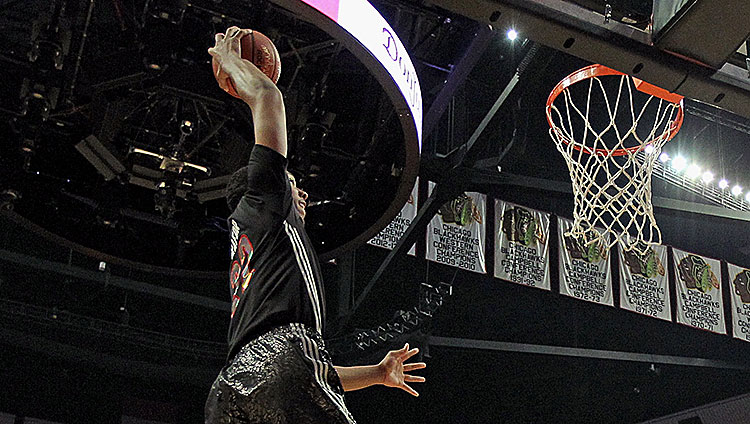 It’s never too early to look toward the future. Last night’s McDonald’s All American Game featured some of the best high school basketball talents in the nation, as it has since 1978. For most college fanboys and girls, it was their first opportunity to catch their young saviors in action and cushion their irrational excitement with some anecdotal backing. Here are some takeaways from last night’s action.

America gleefully drank the tears of Duke after Mercer upset it in the tournament, but the Blue Devils might be laughing all the way to a national championship next season with the country’s top recruiting class.

It begins with Jahlil Okafor, whose combination of size, skill, and polish is unparalleled for his class, even in an incredibly deep big-man talent pool. He showed some nerves playing on his hometown United Center court, missing several bunnies and blowing a couple of dunks. But this 18-year-old has 30-year-old moves.

On one play, Okafor posted his good friend Karl Towns, spun right, and sealed his man off by essentially pinning him onto his back and taking him out of the picture. It gave Okafor an unobstructed lane right to the basket. It was something you’d expect from Al Jefferson, and indeed, that might be the best comparison for Okafor at this stage.

What makes this Duke recruiting class so special is how much chemistry Okafor, Tyus Jones, and Justise Winslow already have. Jones is an artist when it comes to using screens, creating space and lanes that no one else on the floor was able to read. Winslow (admittedly my favorite player from this class) is a player in the mold of Michael Kidd-Gilchrist or Rondae Hollis-Jefferson. He doesn’t have a hyphen in his name, but his game is a string of hyphens. He’s the best defender-screen-setter-team-player.

I’d be remiss to neglect dunk champion Grayson Allen, who won the thing by donning Jay Williams’s retired Duke jersey and dunking over Okafor. He didn’t have the biggest presence in the game, but did show a nifty wrong-footed midrange jumper off a spin away from his defender.

I’m sorry for the scare at the end of the game, Jayhawks fans. With 20 seconds left, hair god Kelly Oubre nearly decapitated his future teammate Cliff Alexander on a dunk attempt. It was awesome; it was terrifying.

Asked Kelly Oubre if he was familiar with the movie "Hook" and/or Rufio. "Yeah," he said, "people have said that." pic.twitter.com/QUkmsvCjHE

Hair god Kelly Oubre has a build eerily similar to Kentucky’s James Young. Young is the better shooter at this point, but Oubre takes advantage of his size and athleticism on drives more frequently. God, did I mention his hair? It’s fantastic, and he’s very aware. As Oubre told SB Nation’s Ricky O’Donnell on media day, “It’s my brand, man. I’m just gonna take it as far as it goes and show everybody I’m different. I’m not trying to be like everybody else. This is what’s in my heart. It’s me.”

Alexander, ESPN’s no. 3 recruit in the nation, is the latest iteration of the Physically Overwhelming Big Man With a Very Distinctive Nose Shape archetype, created when Amar’e Stoudemire landed on Earth. Andre Drummond was Stoudemire’s successor, and now it’s Alexander’s time. He’s not quite on their level of jet propulsion, but of the three, he is already the player most willing to bang around inside (Drummond is definitely not far off, though I suspect a lot of his thrashing inside is done kind of unintentionally). Unfortunately, Alexander had injured his right hand earlier in the week, so we couldn’t see him at the peak of his power, as evidenced by several missed dunks.

Two years ago, at Adidas Nations, I caught my first glimpse of Emmanuel Mudiay. The only players who impressed me more at that tournament were the relentless (and incredibly clutch) Noah Vonleh and some scrawny kid from Australia named Dante Exum, who, um, I’ve been quite enamored with.

Mudiay was made for showcases like the McDonald’s All American game. At 6-foot-5, with a sturdy frame and maybe the best overall athleticism in the class, he is a walking John Calipari point guard stereotype. It might be irresistible to throw the Rose/Wall/Westbrook comparisons out there, but even at this level, Mudiay doesn’t brandish his extraordinary gifts so insistently. He’s not out there warping the state of the game just by being on the court.

A calm and steady dribble at the top of the key can lead to a thunderous slam three seconds later. A slight jog up the middle of the court can suddenly transform into a half-court lob. He has the weaknesses you’d expect from a player of his ilk. His decision-making in the half court could get better; his perimeter game could use consistency; he is a chronic over-dribbler. Sometimes when he fades away on his jumper, it can seem like all he’s doing is showing people how exhaustingly long he can stay in the air. These are problems, sure, but he just turned 18 a month ago and is heading into what promises to be a fruitful partnership with Larry Brown.

Myles Turner, the no. 2 recruit in the nation, is still deciding between six schools. The most convenient comparison has been fellow Texan LaMarcus Aldridge, but I like to entertain the notion of a Larry Sanders with 3-point range (Turner made an NBA-range 3 out of a pick-and-pop 30 seconds into last night’s game). Southern Methodist is one of his options, though not considered a favorite. He said he won’t finalize his decision until after the Jordan Brand Classic, but after seeing Mudiay’s no-look pass to top recruit Okafor last night, I’d say the choice is kind of obvious.

Karl Towns (listed as Karl-Anthony Towns) is the player JaVale McGee thinks he is. He’s not what you’d consider an explosive freak of an athlete, but he has an unbelievable amount of fluidity for a legitimate 7-footer, even though he’s still trying to grow out of that awkward phase of figuring out his own body. He has range out to the 3-point line, good passing instincts for a player his size and age, and can put the ball on the floor without hesitation.

His origin story isn’t one of physical transfiguration like Anthony Davis’s, but when we talk about Towns’s staggering versatility, Davis is a clear point of reference, even if their games aren’t too comparable at this stage. In another life, Towns is a highly touted pitching prospect, a position he plays for the St. Joe’s baseball team in Metuchen, New Jersey. His rocket arm was on display last night with an absolutely insane outlet pass that just about traveled the full length of the court, hitting his target squarely.

The Wildcats get their Julius Randle replacement with American Canadian double agent Trey Lyles, who has a complete offensive game at 6-foot-10. He has a low center of gravity and a sturdy base despite his slim build. Someone I’d keep an eye on is Tyler Ulis, a 5-foot-9 recruit who breaks the Calipari point guard mold. Over the years, we’ve gotten used to watching a certain type of lead guard run his team. Derrick Rose, Tyreke Evans, John Wall, Brandon Knight, Andrew Harrison — physically superior dudes. Next year, for the first time in recent memory, Calipari will have a pest.

Justin Jackson scored on an easy run-out opportunity in the first four seconds of the game. While other players were botching alley-oops and getting their shots blocked, Jackson quietly kept himself on the fringe of plays, just outside of detection. The ball would magically find him (sometimes because he was clearly cherry-picking), and he would find a quick four-foot shot off the glass. Jackson had 10 points in the first half and finished with a game-high 23, shooting a ridiculous 11-for-14 from the field, which included a corner 3. None of his points drew much fanfare, but they were insistent. It seemed like he was getting himself an easy bucket every other possession. His frame is long and slender, but there’s a distinct Antawn Jamison–ness to his offensive game. He has flip shots, floaters, and disarming maneuvers to get where he needs to go.

The other big UNC recruit, Theo Pinson, only made one field goal, but it might’ve been the best of the game.

I noticed I was cradling myself in the aftermath. It was like I was out of my own body, staring at my shell-shocked self. I’d seen this from Pinson before. It brought me back to last summer at Adidas Nations when Pinson nearly caused the walls of the Hall of Champions Gym in Long Beach to crumble with the biggest tomahawk attempt I’d ever seen from a high school player. He might’ve, were it not for an equally spectacular defensive play from Winslow.

The Tar Heels are getting one of the most exciting players in the class, and Pinson has an outsize personality to match his explosiveness. On Monday at the Powerade Jam Fest, he unofficially won the night with the best prop dunk I’ve seen in years: the selfie dunk, which narrowly edged out the time in August when Pinson won a dunk contest by dunking over his mom.