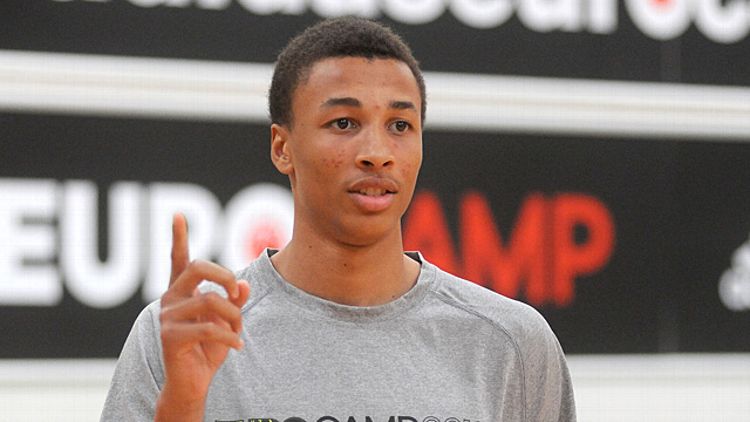 Earlier this week, ESPN draft insider Chad Ford released his first 2014 NBA draft big board of the season. The upcoming draft (only 315 days away!) promises to be one of the best in history. There are a number of name brands already entrenched in the top 10, but for the casual reader scrolling down Ford’s list, no. 3 might come as a bit of surprise. That’s where you’ll find Dante Exum, an Australian guard who has somehow leapfrogged the likes of incoming Duke freshman Jabari Parker and Oklahoma State sophomore Marcus Smart. Of course, Ford isn’t the only one anointing the Aussie as a top-three pick. Immediately after the FIBA U19 tournament in early July, DraftExpress was the first to throw the bold prediction out there.

So how good is this kid? I’ve written about him in this space before, and after stalking watching him in most of the major showcases over the last two years, I can say with conviction that Dante Exum is going to be very, very good. In fact, before the U19 tournament started (and before he was thought of as a top-three prospect), I made my own bold prediction that will live forever on the infamous Grantland whiteboard. Let’s hope I’m right.

Here’s your Dante Exum primer in a special edition of Who’s That Guy?

Who Is He? Dante Exum.

Where Is He From? Australia!

Best Wikipedia Tidbit: “He is the son of former National Basketball League player, Cecil Exum. His father, an American, moved to Australia to pursue a professional career and later became a naturalized citizen of Australia.”

I swear that is more interesting than it sounds. Cecil Exum was a sophomore benchwarmer for the North Carolina Tar Heels in 1982 when UNC won a national championship with Michael Jordan and James Worthy leading the way. He was drafted by the Denver Nuggets with the 194th overall pick in the 1984 NBA draft, but made his living playing a year of professional basketball in Sweden and seven in Australia, where he had his best season in 1992 with the Geelong Supercats of the Australian NBL, averaging 17.2 points, 10.5 rebounds, two assists, 2.4 steals, and 1.5 blocks a game. But any contribution Cecil has made to Australia prior to 1995 pales in comparison to producing Dante Exum, who is already one of the country’s most sought-after exports.

This highlight reel of Exum’s performance at the 2013 Nike Hoop Summit last April is the best sampler of his ability. His speed in the open floor and ability to change direction is special. While his frame resembles a scaled-down Nicolas Batum, he has the jets of a player four inches shorter. The video isn’t the best reflection of his role in the game — Exum largely played off the ball, with Atlanta Hawks draftee Dennis Schroeder handling much of the point guard duties — but it does show off the many ways in which he’s able to score. The tip-in attempts shouldn’t come as a surprise — Exum’s court awareness and near-6-foot-10 wingspan allow him to be an excellent rebounder on both ends for his position. And while he may not possess the same kind of vertical explosiveness as his idol, Derrick Rose, at his best, Exum’s ability to drive and kick with his top-end speed falls right in line with how Rose and other dynamic point guards have set the league on fire. As long as he doesn’t try to adopt Rose’s violent jump-stop, I think he’ll be just fine.

This is a pretty nice news package of a 15-year-old Exum from 2011. In it, we learn that Dante is a twin! He was also incredibly modest and levelheaded, which is a pretty healthy trait at that age. When asked what his ambitions were, he responded, “To get as far as I can in basketball, whether that’s NBL, NBA, doesn’t matter, but as long as I get there.” He cracks a shy smile as he utters “NBA.” Given what we know now about his prospects, it’s incredible how content he sounds with the idea of playing in Australia for his career, as if that was the realistic assessment for his ceiling at the time. He’s made drastic improvements over the last two years, and has become one of the best young players in the world. I would love to see 15-year-old Exum’s reaction to the amount of acclaim his 18-year-old self has generated. I’d imagine him having a pretty wide smile.

Is He Enjoying His Summer?  No, but only because it’s winter in the southern hemisphere. Exum has been in New Zealand for the last few days. With Andrew Wiggins eschewing his Team Canada duties to spend more time in Kansas, of the projected top-five picks in the 2014 NBA draft, no player is racking up more international experience than Exum. Earlier today, Exum and the rest of the Australian National Team competed against New Zealand in the first game of the 2013 FIBA Oceania Championship, which might be the most insignificant championship in FIBA’s existence, since Australia and New Zealand are the only representatives of the Oceania region and thus automatically qualify for the 2014 World Cup. He played sparingly in the game, logging only five minutes, all in the first half. It must have been a new experience. Instead of being the lead man on Australia’s youth squads, he’s now playing with men more than five years his elder. He’s used to being the man in late-game situations, but there he was on the bench, towel waving as Patty Mills stole the show in the fourth quarter.

Should We Know Him? Yes, especially if he decides to declare for the 2014 draft, which he is reportedly 50-50 on. That’s exciting news for draftniks, since it was only about a month ago that Exum was certain he was going to be playing college ball. Having a legitimate shot at being a top-five selection could change anyone’s mind, and it’s no fluke that he’s now considered a top-three prospect on two of the most respected big boards on the Internet. He’s had an incredible 2013, with his 16-point outing off the bench at the Nike Hoop Summit and his 33-point outburst against Spain in the U19 quarterfinals, building upon the incredible breakout year he had last year. For college fans, the fact that Exum graduates high school in December means that if he does end up playing NCAA ball, he’ll be joining a team later on in the season. That doesn’t look to affect his recruiting trail, as Indiana (Dante really enjoyed his visit there), Louisville, Kentucky, and other powerhouses are all still trying to win his affection. Because chemistry be damned if you can add a player of Dante Exum’s caliber.