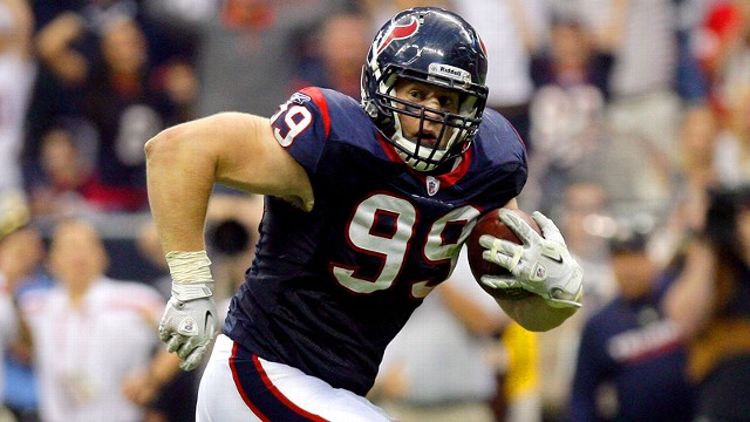 There are two ways to think about the news that J.J. Watt has been lobbying Gary Kubiak to play offense for the Texans. The first is to lament the 22 days until the NFL kicks off, to curse the steady stream of meaningless stories sure to populate the few short weeks before actual football begins. The second, the one I’m choosing to go with, is that this would be the greatest thing that’s ever happened.

“I’ve been lobbying since day one,” Watt said, according to Brian T. Smith of the Houston Chronicle. “It hasn’t worked yet, so I don’t think it’s going to work anytime soon. But it’s (Kubiak’s) team.” Kubiak said later yesterday afternoon that he’s considered using Watt as part of a goal-line package, but not much has come of it quite yet — and it’s unlikely anything will.

My Watt feelings have been made clear, so I’m in favor of whatever puts him on the field for more plays. And c’mon, it’s not like the Texans offense has been flush with receiving options in the past. Watt is 6-foot-5, has a 37-inch vertical leap, great timing, and excellent feet. Is it that hard to imagine him making a few big plays if used sparingly on offense? I’m only half-kidding about this!

OK, I’m mostly kidding, but I think there’s something to this — maybe. I might be alone here, but the idea of watching a bunch of NFL stars play positions (or a side of the ball) they don’t normally play is endlessly fascinating. Offensive and defensive football are so different that, to me, thinking about Watt playing tight end is almost like thinking about LeBron James playing tight end. And considering the complete dearth of interest in the NFL all-star situation, it seems like forcing Pro Bowl invitees to play different positions would at least churn up some viewership. I want to know which wide receiver would make the best corner, or what linebacker could play quarterback. Wouldn’t it make sense if one part of getting the best football players in the world together in one place was an actual contest to find out who’s the best football player? Roger Goodell, feel free to hit me up anytime. I’ve got a million of these.