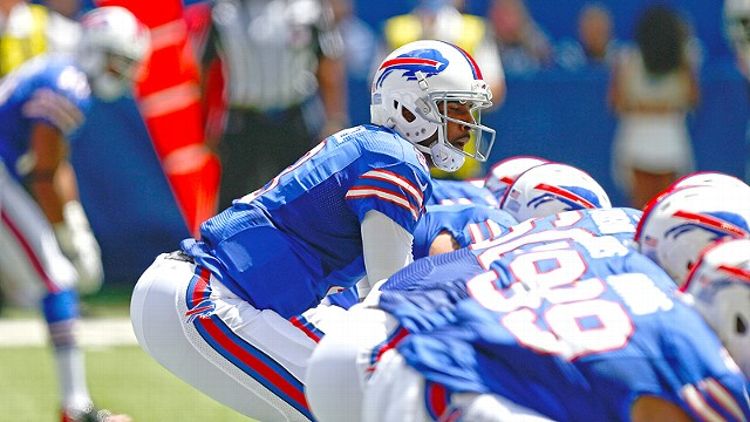 1. I wasn’t able to catch Sunday’s Colts-Bills game live, regrettably. Family and friends were at my house for a birthday party, and only a monster would skip out on burgers and ice cream and cornhole for a PRESEASON MATINEE featuring world-beaters like Jeff Tuel and Chandler Harnish. So when I saw on Twitter that E.J. Manuel went 16-for-21 with a touchdown, I became super giddy and basically spent the next hour rubbing my hands together like Birdman. Of course, this was because I ranked Manuel 22nd among all quarterbacks three weeks ago — sky-high compared to most of my colleagues in the booming fantasy rankings industry — and thought I’d consequently be hailed as a prescient identifier of undervalued assets. Like a Warren Buffet for fantasy quarterbacks, sans all the money!

Then I actually watched the game, and, well … let’s just say the vast majority of Manuel’s passes were shorter than an Olympic gymnast. His 16 completions netted … wait for it … a paltry 107 yards, good for 5.1 yards an attempt. Seriously, I think Manuel would’ve been content to average 2.5 yards per completion, and would’ve justified doing so by arguing that four consecutive 2.5-yard gains result in a first down. Unassailable logic, to be sure. He’s just an AERIAL MINIMALIST, that’s all.

Furthermore, his performance reminded me of Brady Quinn’s preseason debut six years ago, in that it was significantly aided by YAC and only impressive if you missed it and took a cursory glance at the box score. Needless to say, comparisons to Captain Checkdown himself are not favorable, but it’s more than understandable for a rookie quarterback to be a little (OK, a lot) timid in his first game action as a pro. (And, to be fair, Manuel’s 17-yard touchdown strike to Dorin Dickerson was inspired and aggressive.) Hopefully he displays some gumption over the next couple of weeks in time for the regular season. If not, at least you’ll know that C.J. Spiller is going to totally dominate PPR leagues.

2. Did anyone else see Greg Little’s ridiculous 17-yard reception off a deflection last Thursday night? The pass wasn’t even intended for him — on third-and-9, with the Browns driving in Rams territory, Brandon Weeden fired a bullet to tight end Jordan Cameron that was, naturally, two yards shy of the yellow line. Cameron failed to make a pretty easy catch, as he is wont to do, and inexplicably batted the ball up and away. Little saw the ball coming and prepared for it like a skilled rebounder, soaring above defensive backs Trumaine Johnson and T.J. McDonald to secure it. The play itself was emblematic of the newfound chemistry between Weeden and Little, apparently a result of an offseason bonding session the two had in Oklahoma. Combine that with reports suggesting Little is “the hardest-working player in [Browns] camp” and Josh Gordon’s codeine-induced suspension, and it starts to seem silly that Gordon has received most of the fantasy breakout hype among Browns receivers.

3. While Bernie Kosar was quick to dismiss the Rams’ receiving corps as “horrible,” Chris Givens had himself quite a game in the limited action he saw, tallying three receptions for 82 yards and a touchdown. He’s definitely Sam Bradford’s preferred deep target, and has taken a sizable lead over Brian Quick, Tavon Austin, and Austin Pettis as the most likely Rams wide receiver to have a huge season.

4. Demaryius Thomas’s production is not going to suffer just because the Broncos signed Wes Welker. Of Peyton Manning’s four passing attempts, three were intended for Thomas (and the fourth didn’t appear to be intended for anyone). It’s tempting, then, to say Eric Decker’s numbers will diminish because of Welker’s presence, but I don’t even think that’s true, seeing as Decker is decidedly bigger, younger, faster, and far more proficient in the red zone. In all likelihood, Welker will slightly outperform Brandon Stokley’s 2012 totals, confirming what most smart football fans already know: Welker flourished in New England because he fit the Patriots’ system perfectly, not because he was the greatest wide receiver known to man. Unrelated: Here’s your daily reminder that the Broncos’ center is named Manny Ramirez. You won’t be able to blame him when he botches a snap — that’s just Manny being Manny!

5. PSA to PPR-ers: Draft LaMichael James before Frank Gore’s owner does. (Or, if you are Frank Gore’s owner, draft him before any wise guys in your league beat you to it.) His stat line — eight carries for 27 yards — wasn’t great, but he demonstrated the quickness and agility that was his trademark in college. (And not to go all Nate Silver–is-a-witch on you, but the preseason is more about the dreaded eye test than compiling impressive numbers.) He’ll be a pass-catching threat out of the backfield and figures to rack up some serious points if the 30-year-old Gore gets injured.

6. Hey, Shonn Greene had a 19-yard touchdown run! Without looking it up, that might be the longest gain of his career. In fact, 19 yards might be the longest distance Shonn Greene has ever run without stopping for fruit snacks and a bathroom break. In other news, Chris Johnson had a 58-yard touchdown that made Greene’s look decidedly less impressive. The main takeaway here is that the Titans’ upgraded offensive line is going to produce some long-ish gains, and it’s extremely unlikely Greene will have any more of them. So: All aboard the CJ2K bandwagon, I guess!

8. Bengals offensive coordinator Jay Gruden on Tyler Eifert’s debut performance: “Great in the running game and awful in the passing game.” Considering Eifert is a tight end and not a running back, this is somewhat problematic news for Eifert’s fantasy value. Leading up to the draft, all we heard about Eifert was that he was the most “pro-ready” offensive skill position player available, and that he’d instantly improve whatever team ended up drafting him. Of course, it’s certainly probable that he’ll progress as a pass-catcher as the season goes on, but lose any delusions about actually drafting him. You’ll be able to claim Eifert on the waiver wire if he starts producing.

9. Please join me in a virtual slow-clap for Mark Ingram. He cleared 4.0 yards per carry by the skin of his teeth against the lowly Chiefs, an occasion that deserves enshrinement in the fantasy sports hall of fame. Nonetheless, we’ll have to see this a few more times before I’m convinced he’s a top 40 running back.

10. Eagles wide receivers and tight ends are gonna be pure hell to own. Michael Vick’s targets will be divvied up between a seemingly endless list of options, making DeSean Jackson even more touchdown-dependent than he was before. If Riley Cooper wasn’t loathsome enough, now he’s going to be fantasy football’s first pass-catching vulture. The phrase alone sends a shiver down my spine.