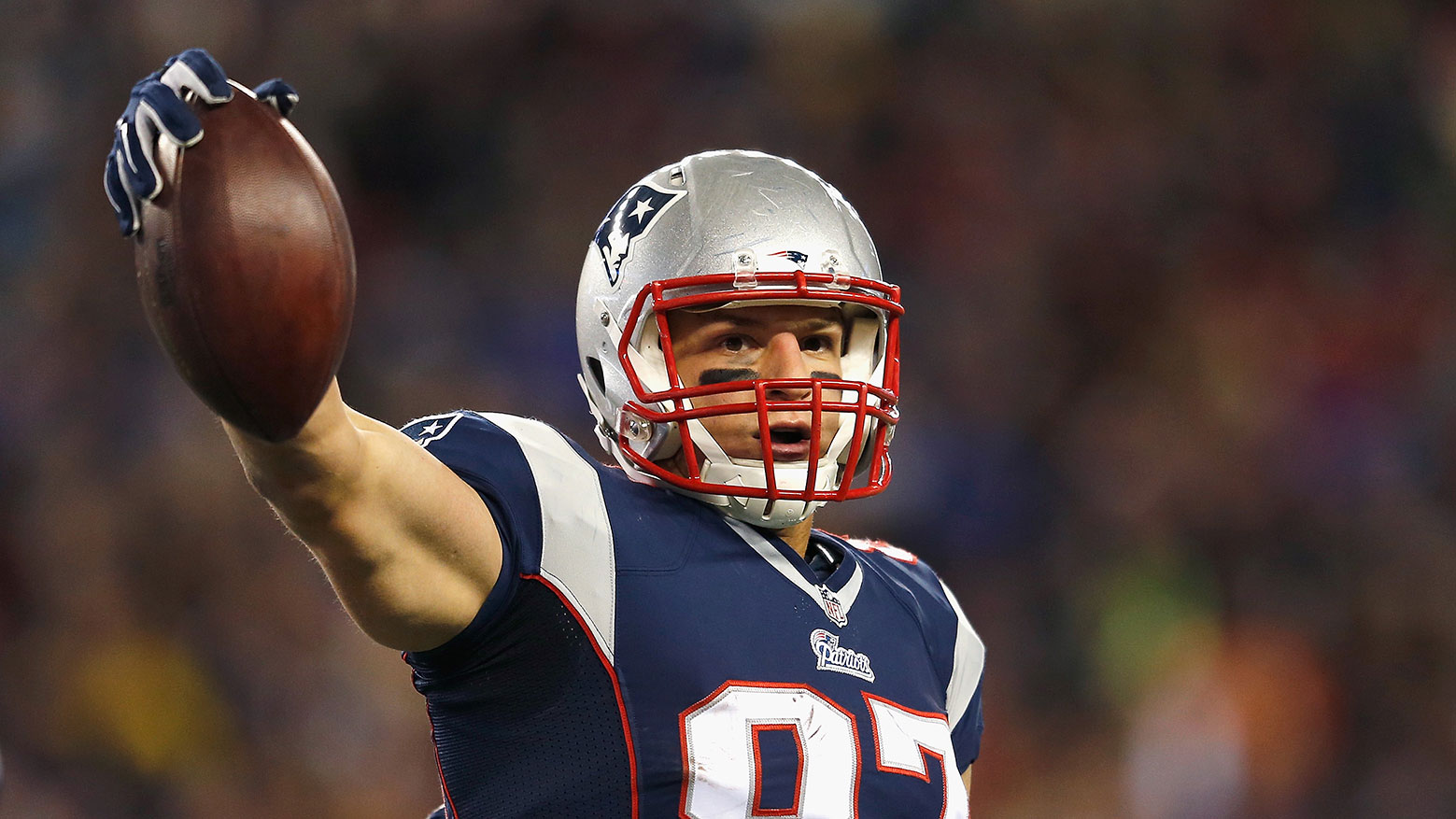 With the increasingly ridiculous number of fantasy football magazines, websites, and resources out there, it seems like we’ve lost sight of what really matters: Guys, this is supposed to be fun.

So, before we begin, allow me to offer a word of caution: If you’re looking for serious advice, you might want to head elsewhere. Wondering whether you should snatch up Eric Decker at a reasonable price? Leave that decision to someone else. A sensible running back pairing of Frank Gore and Justin Forsett? Thanks, but I’ll pass. No one’s bidding on Matt Ryan? Well, I hope he’s ready to keep sitting there.

We are not here to be prudent. No, we’re here to build the most exciting fantasy team — both on and off the field — that someone equipped with an imaginary $200 auction budget could reasonably acquire. This is not about exploiting the quarter-point your league awards for a reception, and it’s not about “finding value” with your mid-to-late-round picks. Because you know what’s truly, emotionally “valuable”? Making every Sunday as insanely fun as it can possibly be. This year, these are the guys who can make that happen.1 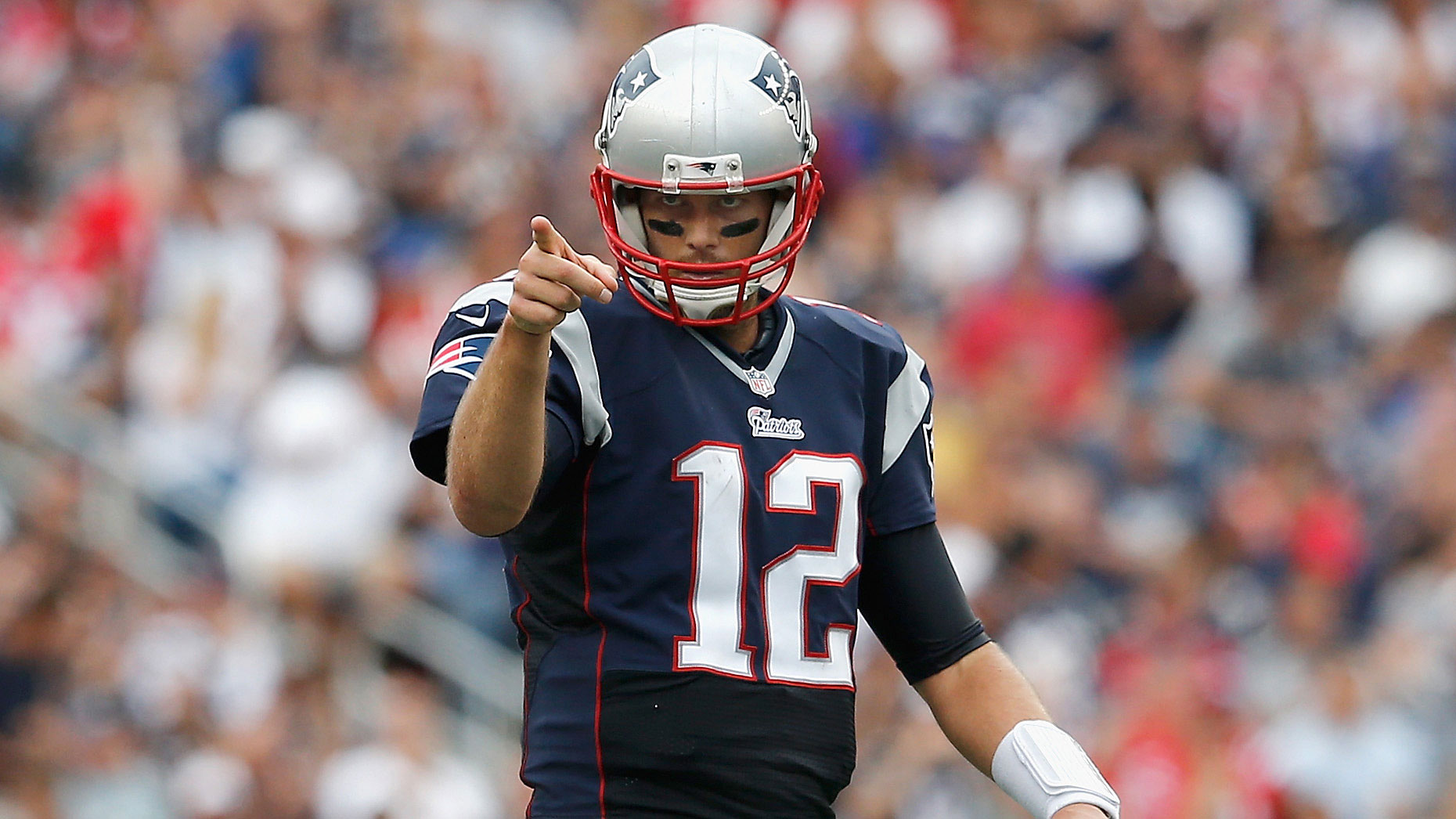 It's almost here. For everything you need to know about the new season, follow all of Grantland's coverage.
There are few better feelings during a fantasy draft than landing a guy who starts the skeptical murmuring among your leaguemates. Just imagine what it would be like to draft Brady this year. As soon as the auctioneer could say “sold,” the jokes would roll in.

Plus, drafting New England’s QB would give you an actual reason to make Courtroom Brady your avatar. I guarantee that will make at least one person in your league screw up a lineup change as he’s hypnotized by its majesty.

The real reason Brady is quarterbacking this team: It gives us a chance to roll with Tom and Emperor Palpatine Belichick as they attempt to burn down the league for the final 12 games of the year. I hope we all realize it by now, but if not: When the football starts, Tom Brady becomes fucking crazy. He’s going to do all he can to head-butt the entire planet this fall, and you better get on his side before that starts. 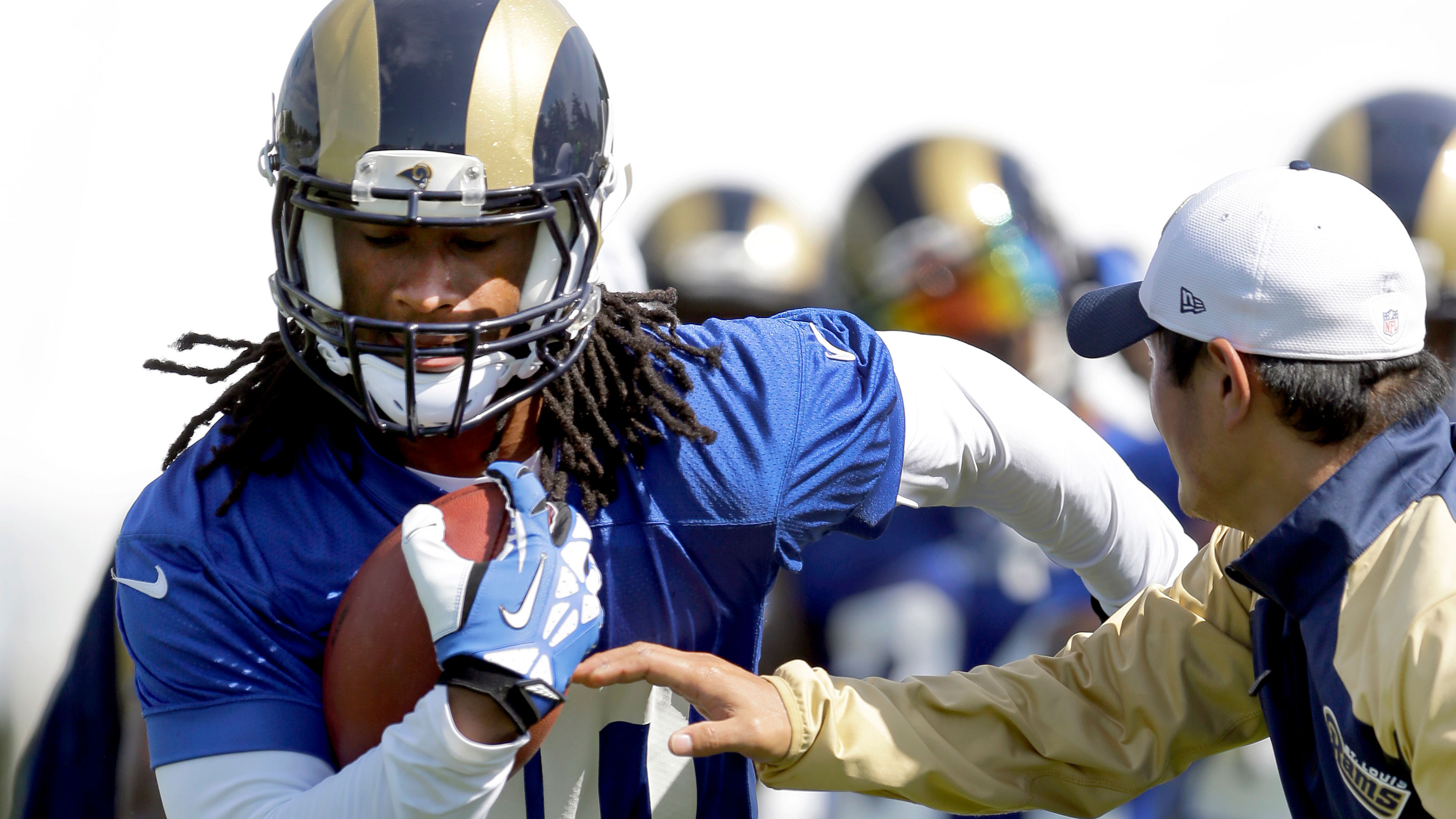 A force-of-nature running back at the height of his powers is still unlike anything else in football. The most recent example that comes to mind is Adrian Peterson ripping off an 82-yard touchdown in St. Louis the year he won the MVP. While watching it happen, I couldn’t do anything but laugh. He put his foot into the ground, shredded through a couple of arm tackles, and game over.

The majority of NFL running backs can essentially be interchanged with each other — their success or failure depends on the offensive line in front of them. Of all the running backs I’ve watched, only a handful ever truly became appointment television, their every carry worth watching because there was just no telling what could happen. At his best, Peterson fits that description. LaDainian Tomlinson did. Marshall Faulk could be that in his own way, and Marshawn Lynch can, too.

I don’t know if Gurley will ever get there, but if the flashes we saw in college are any indication, he has a chance to come close. He’s a 225-pound terror who’s just as happy to put you into the ground as he is to outrun you. When it comes to raw talent, this dude is scary as hell. After all, running backs coming off a torn ACL don’t get drafted 10th overall unless they’re special.

As a rule of thumb: If the word “special” can reasonably be used to describe a football player, we want him on this fantasy team. 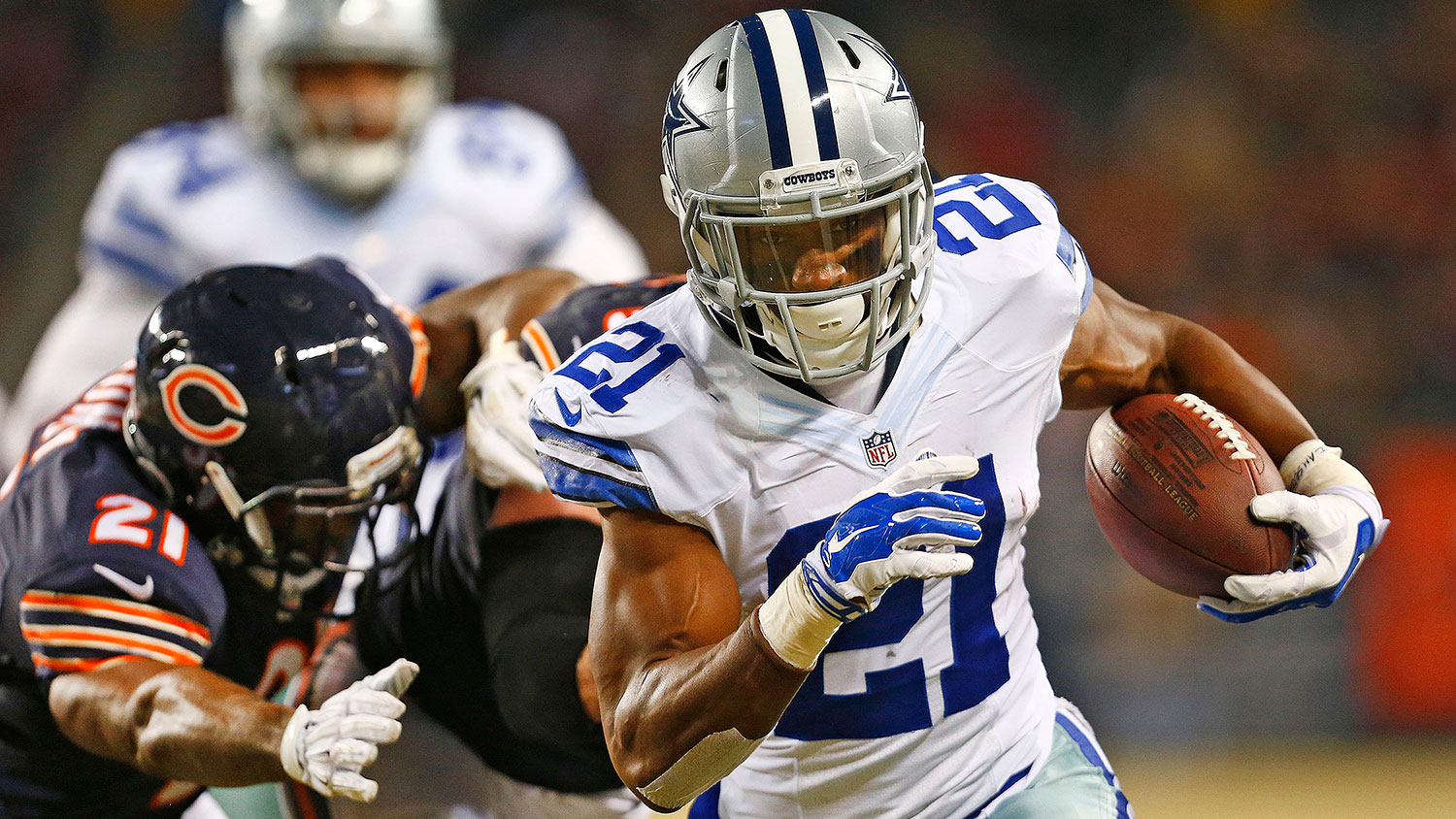 Let’s get this out of the way: Joseph Randle is going to be starting for the Cowboys.

At this point, it doesn’t matter how many incredibly dumb things he says. Darren McFadden is nursing a hamstring injury, and Dallas still hasn’t brought in any other running back help. By default, this is Randle’s job. Mark it down.

Also by default, anyone running behind that Dallas offensive line will be worth watching. But Randle, in particular, has a knack for ripping off big gains, and that goes back to his time at Oklahoma State. He averaged 6.7 yards per carry for Dallas last season, and even though it seemed like he received plenty of garbage-time action, he carried the ball only 51 times. Also, we, um, don’t have an unlimited budget, so Randle and the Cowboys O-line promise the most potential enjoyment for a reasonably low price. 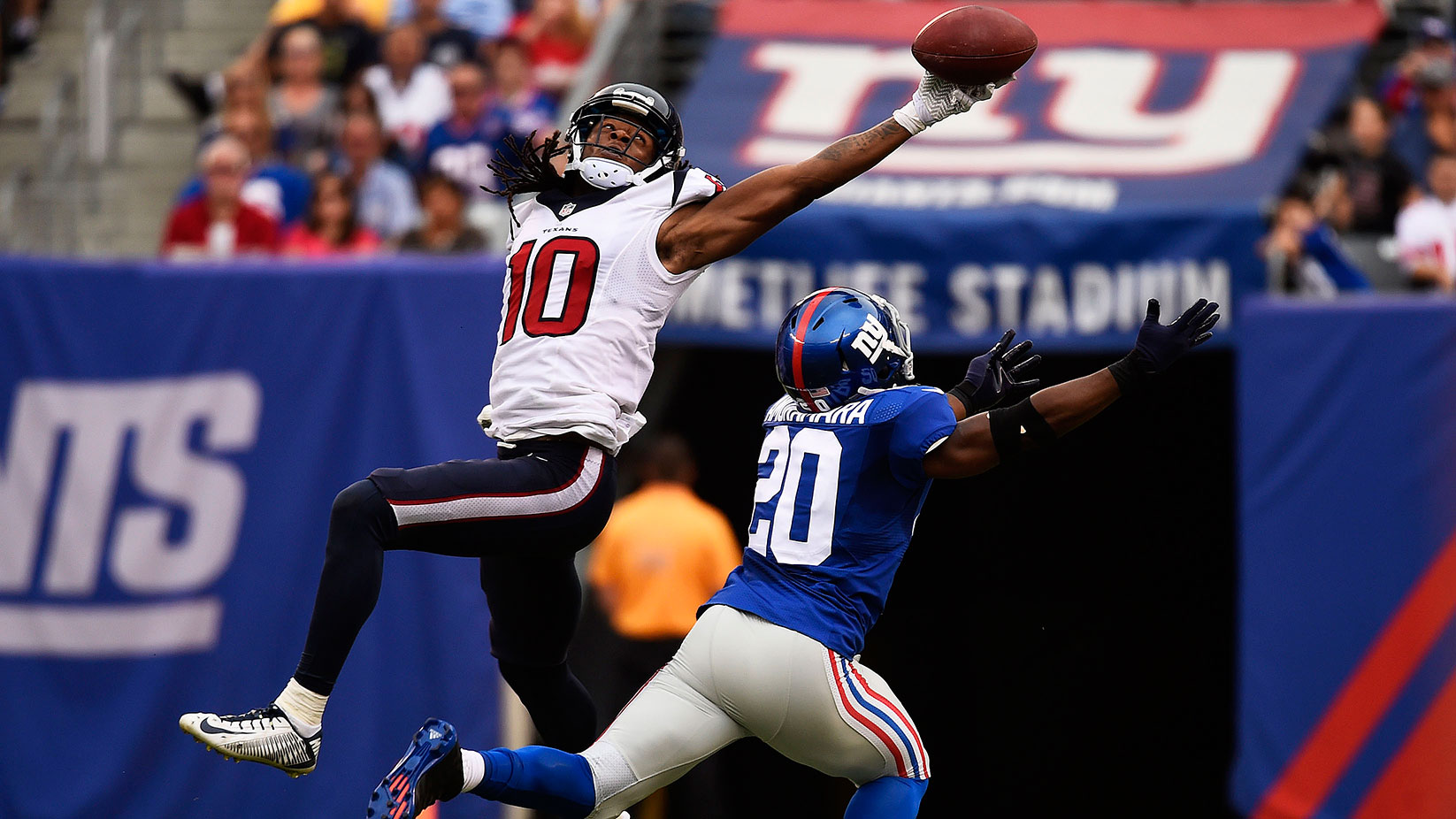 Anyone who hasn’t seen this week’s episode of Hard Knocks — actually, never mind. If you haven’t, go watch it right now. There’s a freaking late-night training montage of J.J. Watt. We both know you have your roommate’s sister’s HBO Go login. So go watch it, and then come back …

Beyond everything awesome (and, admittedly, lame) that Watt did, the best part of the episode is clearly Nuk Hopkins verbally and emotionally bombing Washington’s DeAngelo Hall into extinction. After the two get into a spat during a drill, they have a confrontation that consists of Hopkins saying “I fear God” over and over before ending it with “I’ll slap the fuck outta you, too.”

And so should the rest of us.

Now, it might sound strange to say that a guy coming off a 76-catch, 1,210-yard season is poised to break out, but with Hopkins, it’s true. He was great last year, and those numbers still came with Andre Johnson eating up 147 targets — 20 more than Hopkins had. Houston’s quarterback play may leave something to be desired, but there’s a chance Nuk is so good this year that it just doesn’t matter. I wouldn’t be at all surprised to see him jump into the “best receivers in the league” class with Dez Bryant, A.J. Green, Julio Jones, & Co. by season’s end. Even if he doesn’t, he can still do shit like this: 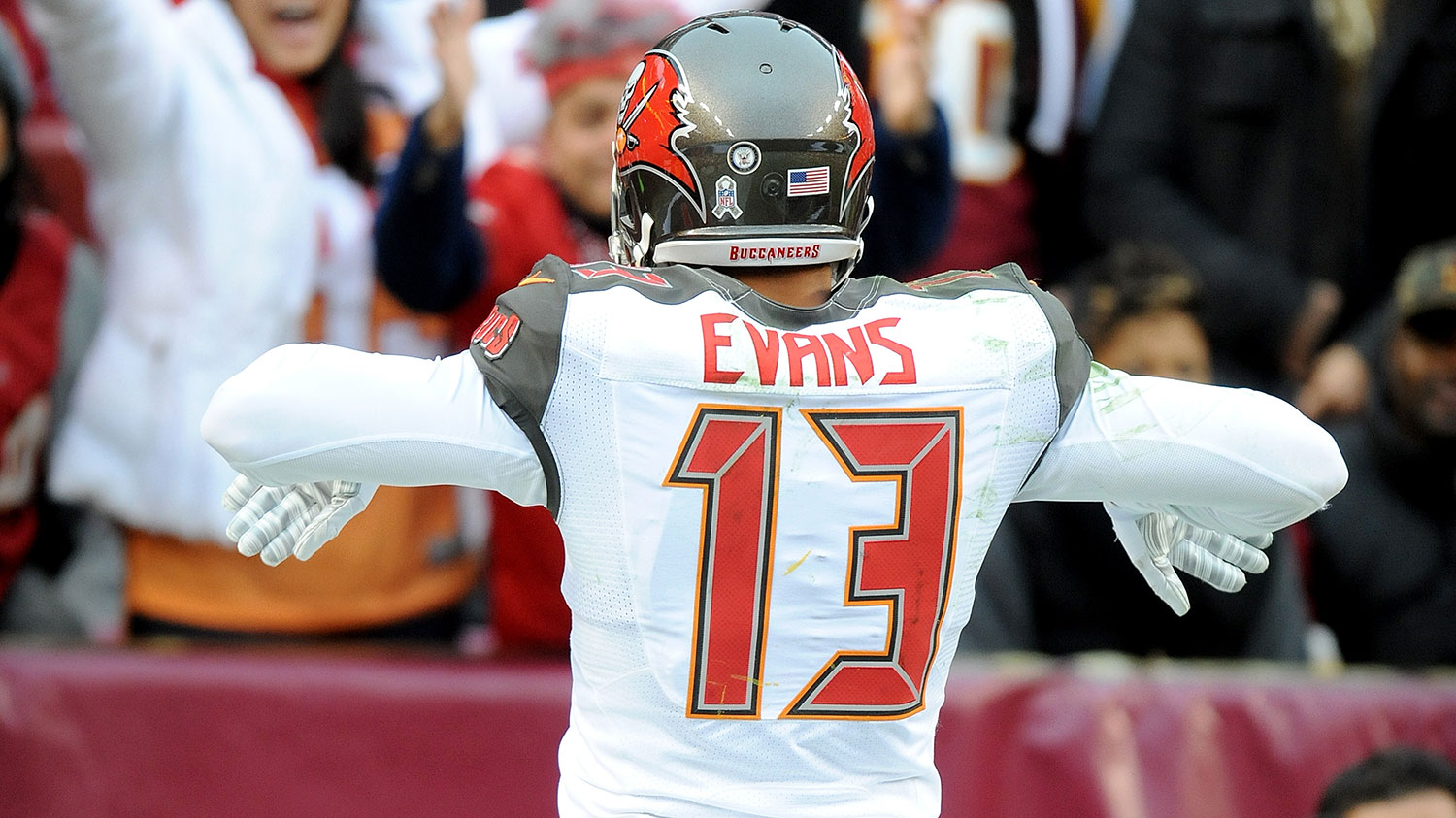 Mike Evans isn’t fair. Watching him against perfectly normal-size cornerbacks can sometimes make Evans look like something you’d create in Madden: a 7-foot receiver with every attribute — hands, speed, spectacular leaping ability — cranked all the way to 100. My favorite moment of Evans’s rookie season wasn’t one of his 12 touchdowns; it was him legally choke-slamming Terence Newman 15 yards down the field.

And before you say that has nothing to do with fantasy football, just remember that the man he just lifted off of — and then buried into — the turf is the guy tasked with preventing him from catching footballs. Good luck with that.

Only six of the 12 touchdowns Evans caught as a rookie came in the red zone — and on only 14 red zone targets. That’s the sort of ratio typically reserved for your monster tight ends and Dez Bryant. Evans is absurd around the goal line, and that leads to what every fantasy owner loves most: RedZone channel cut-ins to your player hauling in a score. Evans is a real candidate for the most “Holy shit, did you see that?” RedZone moments of the year, and is there anyone more exciting to own than that guy? 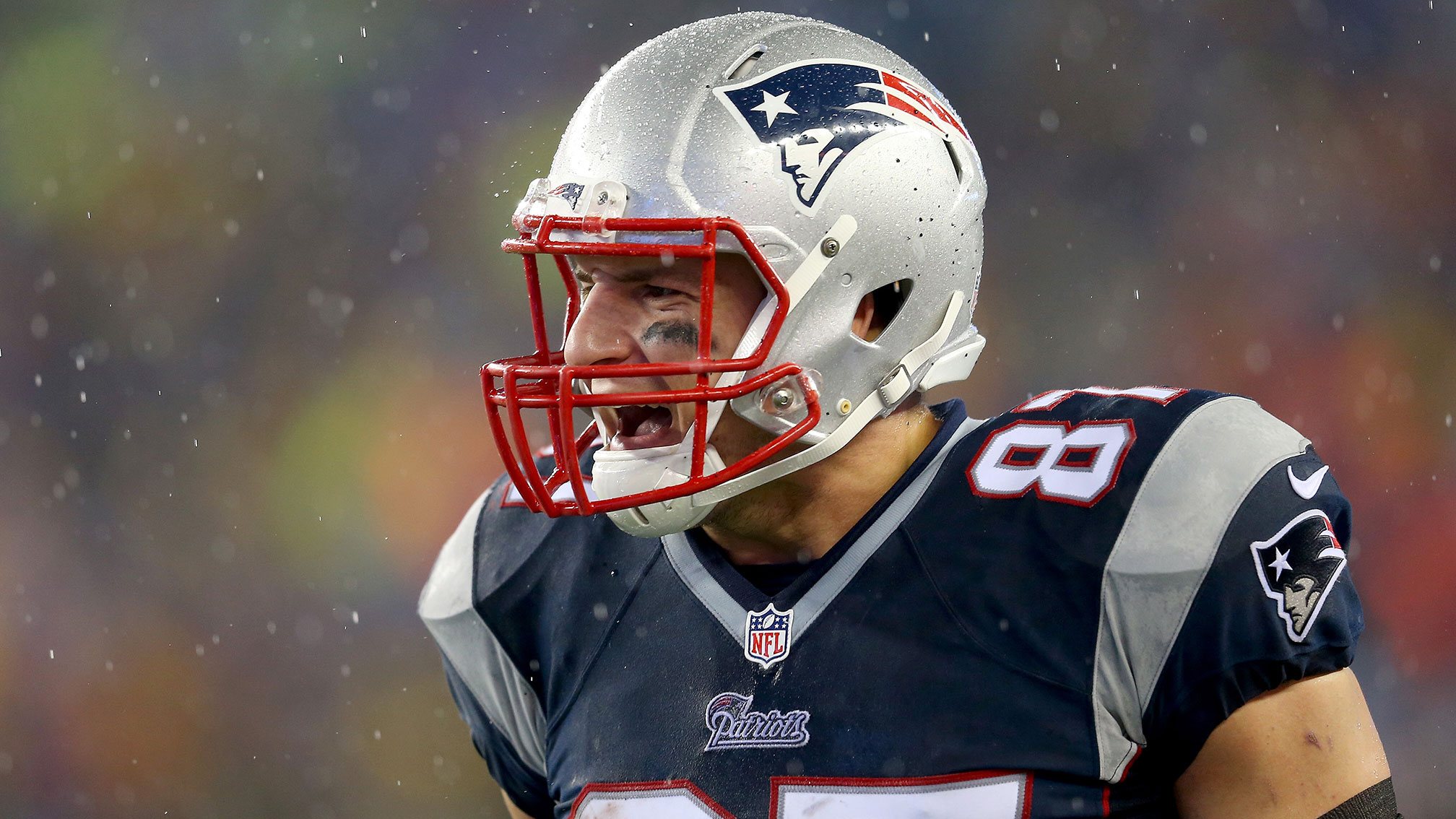 There’s really nothing quite like having Gronk on your fantasy team. I remember when the guy in our keeper league finally had to cut him loose. He cried. He actually cried. OK, fine, he didn’t, but he was close. And he probably should have cried.

Gronk is everything you want. He’s a touchdown machine, he’s liable to say just about anything, and there’s a 94 percent chance an amazing cell phone video of him pops up during the season. Plus, we already have Brady, and trotting out a quarterback-receiver tandem every week is fun as hell. Remember: Double points are the best points.

Nick Fairley is a backup on this line. I don’t know what else there is to say. If you hate quarterbacks — and man, do I — this is the defense for you.

He’ll be the kicker on this sort of team until the day he retires. And maybe even after that. The points difference wouldn’t be that big, right?

I might be insane, but I think the Jags’ offensive line has a chance to be sneaky good this year. Even if they can only piece together an average group up front, Yeldon is the type of back who can make the most of what he’s given. He has the impressive vision and ability to find creases, and he’ll be the best option for Jacksonville from the start.

If the Brady suspension is upheld, we’ll need an option for the first four weeks, and Bridgewater is easily the best one. I’m not saying he’ll outscore some of the other quarterbacks you could maybe throw into this spot, but how much better would it be to grab Bridgewater and hope he makes the leap, compared with, say, snatching up Ryan Tannehill and having him score you 16 points a game until Brady’s back?

Meet the Adam Dunn of running backs: Coleman is looking to hit a home run every time he touches the ball. It’s often to his detriment, but when it works, man, does it work. During his junior season at Indiana, Coleman’s average touchdown run went for more than 40 yards. Forty yards! On average! He’s trying to take every single carry to the house, and really, what’s more fun than that?

Mason is the ultimate Todd Gurley insurance, but that’s not all he is. There’s some juice in those legs, and as a rookie, he was the sort of skittering back that you’d catch out of the corner of your eye while watching a half-dozen games at once. Even if Gurley does end up handling most of the load, I still expect Mason to jump off the screen a few times this year. The offensive line is still a major concern, but St. Louis has a real chance to have an electrifying backfield.

The eight touchdowns on 49 targets from last year is an impossible pace to replicate, but Bryant showed that he’s a legitimate threat to score every time he takes the field opposite Antonio Brown. It’s easy to forget he played in only 10 games last year, and I’ll just say that I’m not afraid of Markus Wheaton or Sammie Coates scraping some of Bryant’s playing time. This offense has a chance to again be one of the best in football, and this time, Bryant should be a part of it from the start.

Odell Beckham 2.0: Can the Sequel Be Better Than the Original?