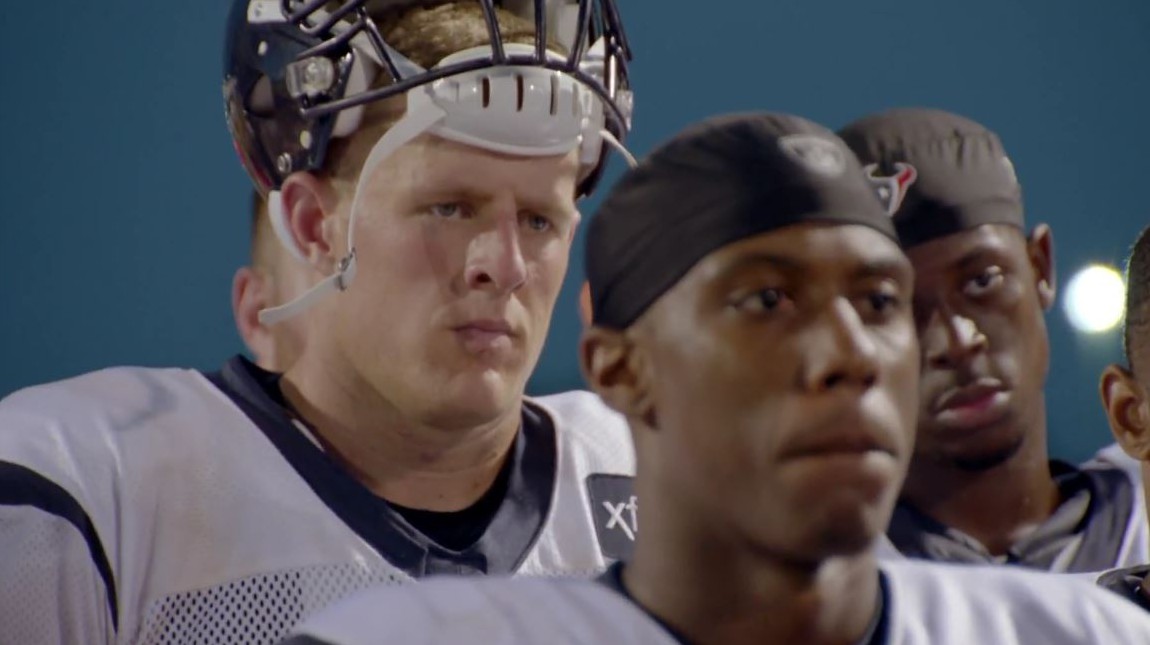 The Houston Texans are the subject of this season’s Hard Knocks, HBO’s wonderful mini-documentary series that follows a professional football team for the weeks leading up to the start of the season. There will be five episodes in total. Last night was the first, and it was good. I’m so excited.

Some things that happened in the first episode:

The show opened with a scene from a coach’s meeting the day before training camp started. The first thing Coach Bill O’Brien said was “Let’s be honest with each other,” and then just a few seconds later in that same speech he began to talk about how the two quarterbacks vying for the starting position, Brian Hoyer and Ryan Mallett, are both quality picks who will do very well when given the chance, which is a thing that a person not being honest would say.

Semi-related: The vigor with which O’Brien delivered his speech is unquestionable. I was super fucking fired up after it. Coach Bill O’Brien drops the f-bomb a lot.

The Most Unfortunate Ironic Moment 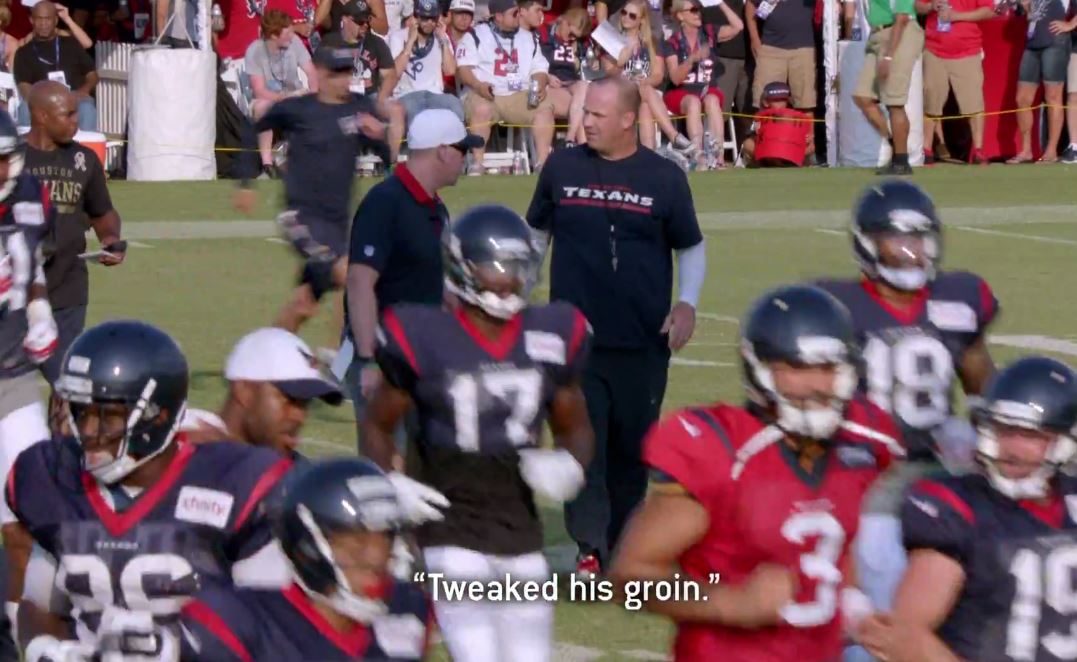 Near the 10-minute mark of the show, we get to the Arian Foster intro. It’s a workout scene, and in it Arian talks about how his brother, Abdul Foster, is in charge of his routine. Arian mentions that he chose him over everyone else in the country because Abdul knows Arian’s body type because they have the same body, so Abdul knows what Arian needs to keep him right. Fifteen minutes later, we watch Coach O’Brien learn that Arian has hurt his groin, and that he’ll be out six to 10 weeks because he needs surgery.

I can’t believe my beautiful Texans couldn’t even make it through the first episode of Hard Knocks without losing their best offensive player. I’m used to it, but I can’t understand it.

Who Should Start at Quarterback?

At the moment, it looks like it should be Brian Hoyer, although I freely admit that I arrived at that decision because Hoyer rhymes with words like “Destroyer” and “Lawyer” and “Employer” and, should you find yourself in the south, “Paranoia,” and all of those make for way better nicknames than anything Mallett-related. A mallet is pretty much the least intimidating of all the different types of hammers. It goes:

The Most Dispiriting Stat

The Most Surprising Thing

Near the end of the show, the Texans travel to Richmond, Virginia, to practice against the Washington Redskins. After the first day of practice there, there’s a dinner at the Governor’s Mansion. Dan Snyder, Redskins owner, was there. It was the first time I’d ever seen him on camera before. I was very impressed with how good he was at hiding his slimy, slimy tentacles. 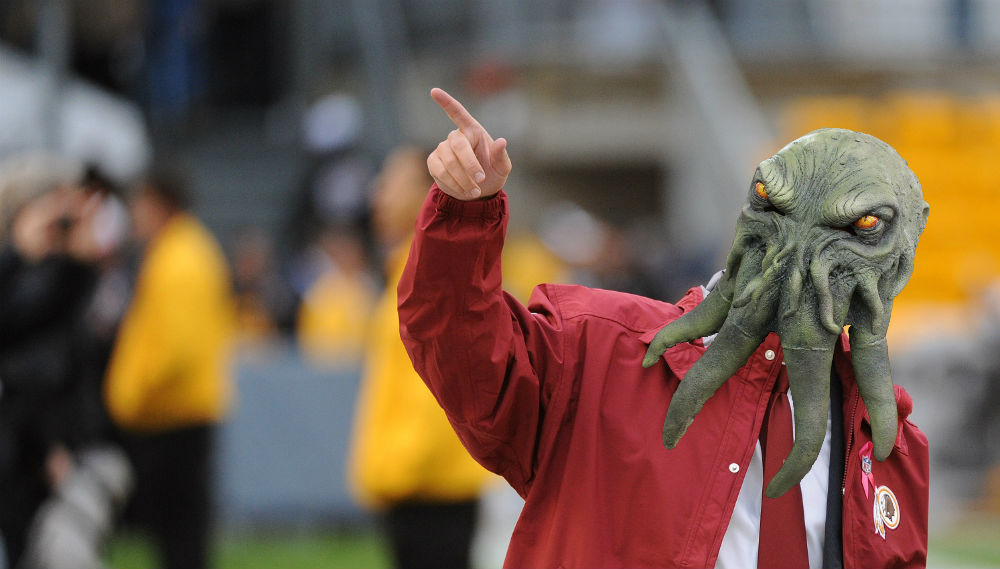 This is the best of all the Unintentional Competitions that happened in the first episode. It’s Bill O’Brien versus linebackers coach Mike Vrabel. O’Brien is steady and staid in the delivery of his FUCKs. Sometimes they’re serious, like when he’s delivering a sermon to the team (“The only thing that matters in that fucking locker room is, ‘Are you willing to help?’”). Sometimes they’re exasperated, like when he was told that Arian Foster had hurt his groin (“… Oh fuck”). Sometimes they’re fun, like when he said he fucking loved Rick Ross (“I fucking love Rick Ross”). But they’re all fluid and measured and nuanced and beautiful. He offered 12 FUCKs this first episode of Hard Knocks. Mike Vrabel, who received far less camera time, managed to fire out 13 of them, most coming in quick bursts aimed at incompetence like suppression fire. I’m very excited to see who wins. I’m going to keep count.

The Most Creative Way of Demeaning Someone

Mike Vrabel, talking to one of his players whom he felt approached a tackle a little too gingerly: “Throw a marshmallow at ’em next time.”

A Sentence That Is Weird, With or Without Context, But Also One That Indirectly Asserts Why Hard Knocks Is a Wonderful Television Show 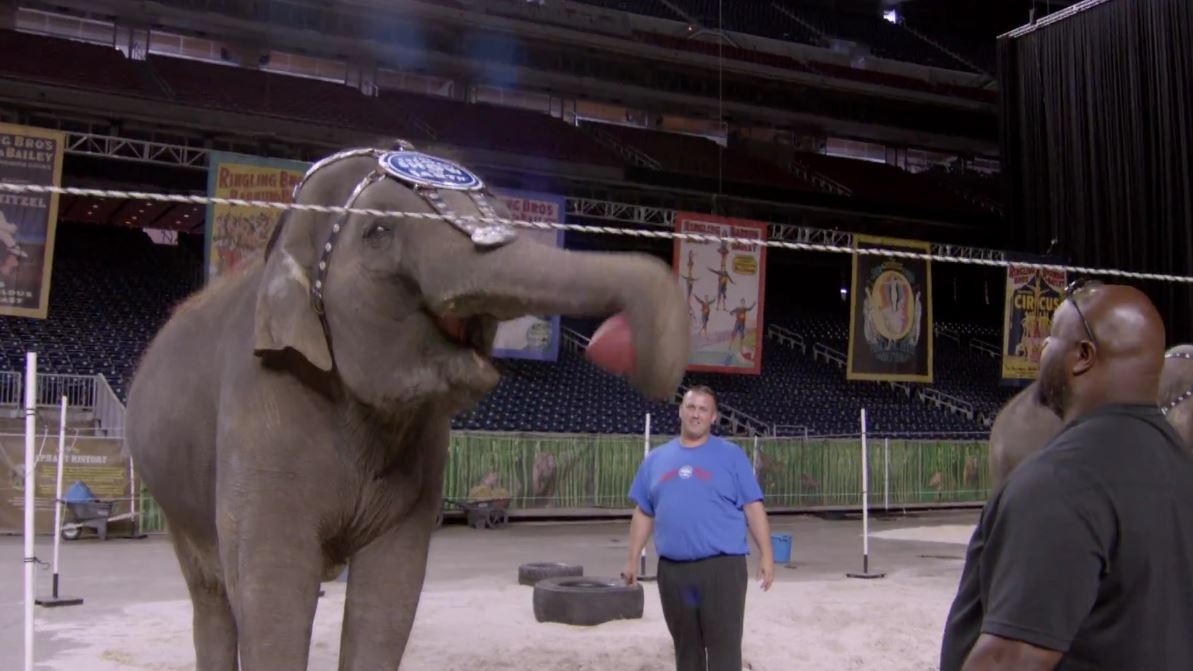 In this first episode, Vince Wilfork played catch with an elephant.

Sidebar: I love Vince Wilfork. I’ve loved him since March, when, a little over a week after it was announced he’d signed with the Texans, his wife posted a video to her Instagram account of him barbecuing and dancing to Lil’ Troy’s “Wanna Be a Baller,” an all-time great Houston rap song.

I respect him so much for that. Let’s do three more Vince Wilfork things:

The Most Accidentally Funny Scene That Involved Vince Wilfork

After the intro music and scene, it cuts to footage shot during a circus at NRG Stadium. During that, the narrator started talking about how the Texans signed a marquee player, veteran and two-time Super Bowl champion Vince Wilfork, and then as soon as he said Vince’s name they cut to a shot of a very large circus elephant. It stayed on it for a few seconds, then panned down and showed Wilfork.

The Most Expectedly Funny Scene That Involved Vince Wilfork

Vince Wilfork was playing pickup basketball. It was the most interesting game of pickup basketball I’ve ever seen. It was five-on-five, and men and women of all sizes and colors were involved. It was incredible. Better still was that during just the minute or so of it being shown, Vince Wilfork referred to himself as Michael Jordan, Vlade Divac, and Tim Duncan, the last of which he shouted while shooting a bank shot that ended up not even touching the rim.

All of the Things J.J. Watt Did This First Episode, Ranked

1a. J.J. Watt walking in slow motion over a bridge to the Texans practice field while Young Jeezy’s “Put On” played.

1b. J.J. Watt dismissing confrontational Washington Redskins WR Pierre Garçon by saying, “You’re maybe 112 pounds. You might wanna stay the fuck back from the defensive line.” 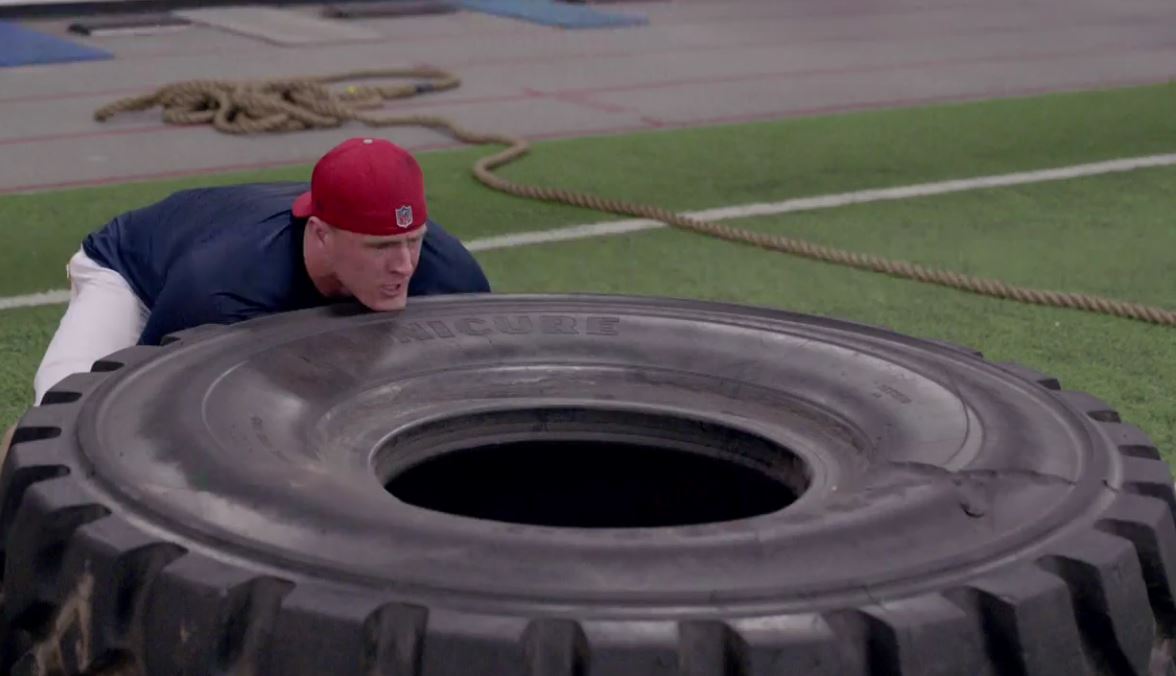 1d. J.J. Watt shouting “Holding!” while being held during a scrimmage.

1e. J.J. Watt jumping on a table. This one was from a clip of Watt on Jimmy Kimmel Live, while the narrator was talking about how Watt is a scene-stealer on camera. As he jumped up on the table, a sound bite of Watt saying, “There’s no point in getting to the top of the mountain if you don’t enjoy the view every now and then” played. I like when things are literal and figurative at the same time.

1g. J.J. Watt being announced by Chris Pratt and Andrew Luck as the 2014 AP Defensive Player of the Year.

1i. J.J. Watt being filmed by a lady wearing a J.J. Watt jersey with a cell phone with a J.J. Watt protective cover on it.

1j. J.J. Watt being hit on by a very loud, hoarse woman in the crowd while he practiced.

1m. J.J. Watt commenting on the straightness of a painted line on the field.

1n. J.J. Watt taking off his shoulder pads and somehow not knocking off the hat he was wearing while he did it.

1o. J.J. Watt saying “Take that personal” after his defense got chewed out by defensive coordinator Romeo Crennel.

The Most Interesting Person on the Periphery of the Show

It has to be rookie CB Kevin Johnson’s dad. Two reasons: (1) He has the longest neck I have ever seen on a human. It’s like Merton Hanks’s neck, but longer, which is a thing I never thought I’d say. (2) Dads who are watching their sons play football are always very interesting. They’re only ever super supportive in a good way or super supportive in an insane-person way. Either case makes for good TV.

All of the Rookies Shown on the First Episode, Ranked

1. Kevin Johnson, CB: He’s the most talented rookie and also, surprisingly, the most fiery. His very hard low hit on Washington Redskins fullback Jordan Campbell incited a team-versus-team fight at the end of the episode.

The Saddest Moment of the Episode

Rewatching the episode, watching Arian Foster catch a pass and blow past a safety (and then gorgeously bark “Them shits ain’t fast enough” at the safety about his legs as he walked back toward the line of scrimmage after the play), and then realizing it’ll be about three months before you see him do anything like that again.

The Other Saddest Moment of the Episode

Watching talented linebacker Reshard Cliett tear his ACL after a bunch of people said nice things about how good he was going to be for the Texans this season.

The Most Houston Moment on the Episode

DeAndre Hopkins has become the new alpha receiver for the Texans (Andre Johnson, former franchise superhero, left for the Colts). During the scrimmage against the Redskins, he and Redskins CB DeAngelo Hall got into a confrontation after Hall said something to Hopkins about not being able to do against him what he’d been doing against the backup CBs (eating their lunches, basically). Hopkins responded by telling Hall to get away from him, to which Hall responded with aggression, to which Hopkins responded by repeating the phrase “I fear God” over and over and over again, and then abandoning that for a gorgeous “I’ll slap the fuck outta you, too.” He went from Joel Osteen to Pimp C at a very impressive rate of speed. That’s a tier-one Houston move. 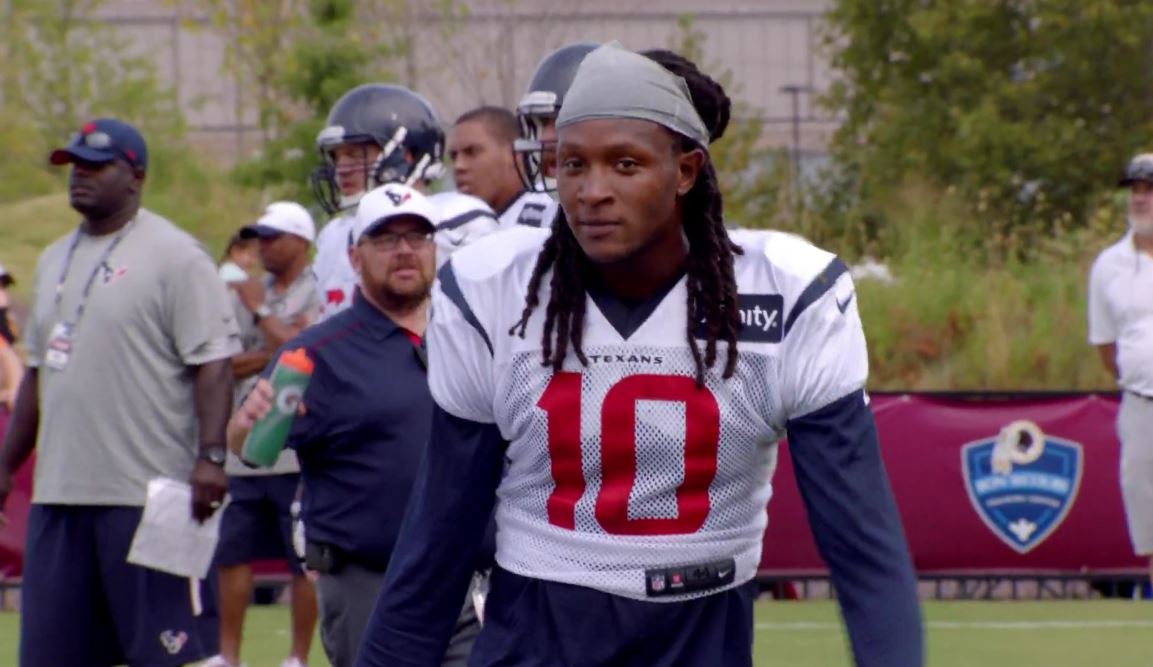