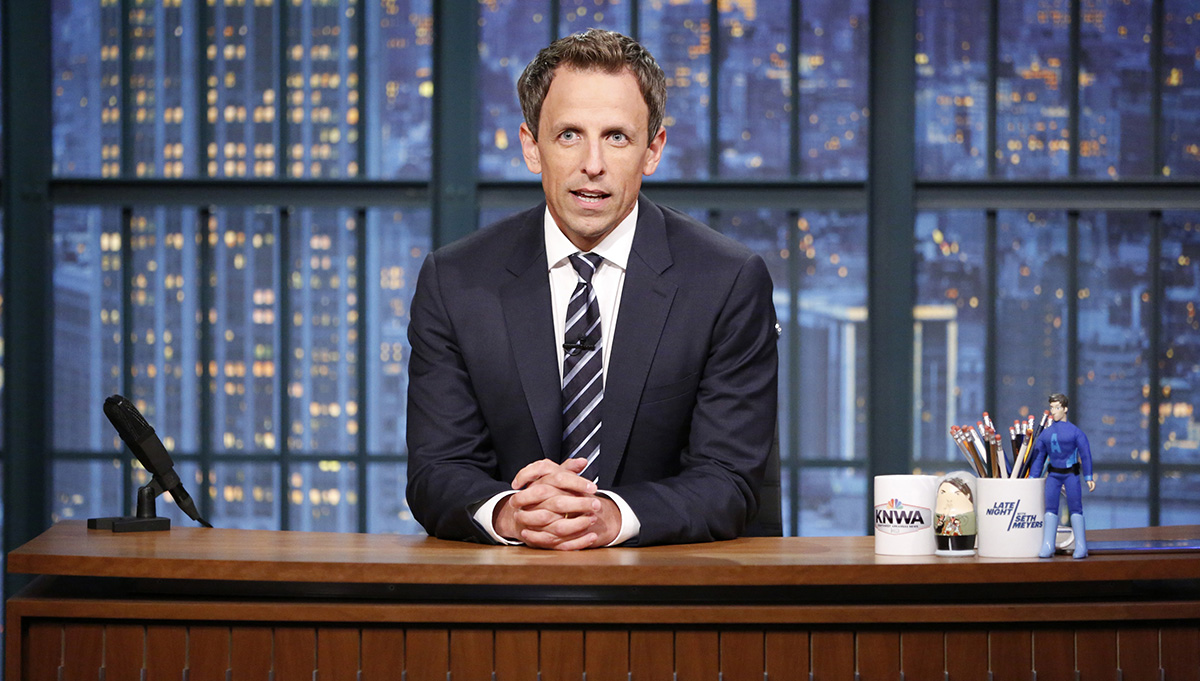 On Monday, Seth Meyers decided to open Late Night by telling jokes while seated behind his desk rather than standing in front of the studio audience. The next day, the Internet sort of freaked out — the New York Times sought an explanation, and think pieces both burying and defending the traditional late-night monologue quickly surfaced to analyze a relatively minor and yet somehow pivotal tweak to the entrenched talk-show format.

“I’ve always felt comfortable at the desk,” Meyers says matter-of-factly when reached by phone a few hours before showtime on Tuesday. “I still do a lot of the show at the desk after the monologue, and it’s always been nice after the monologue to get back to the desk and sort of sit down and settle. In a weird way, we’re just moving that up five or six minutes.”

Part of why Meyers’s sit-down monologue was news is that the way talk shows look and feel has remained virtually unchanged for decades. You open with some topical stand-up comedy, you bring on a movie star plugging a mediocre movie, you close with a musical performance — it’s precisely this formula that the audience expects to gently lull it to sleep every night.

But little else about late-night TV seems settled lately. A destabilization process that started with Jay Leno and Craig Ferguson in 2014 has accelerated this year with the departures of David Letterman and Jon Stewart, who took a combined 50 years of late-night experience with them. What’s left in their wake is a much different landscape.

The top two hosts, Jimmy Fallon and Jimmy Kimmel, were born around the time that Leno and Letterman started kicking around the Comedy Store. Conan O’Brien, once the boyish upstart, is now a grizzled elder statesman. While new Late Show host Stephen Colbert is hardly a talk-show neophyte, nobody is quite sure what his post–“Stephen Colbert” incarnation will look like. (Colbert also wants to shake up the traditional show-opening monologue.) Then there’s new Daily Show host Trevor Noah, who next month will join Larry Wilmore in reimagining Comedy Central’s satirical bedtime fare. Another Daily Show alum, Samantha Bee, will be joining the fray soon, and James Corden is still finding his legs at The Late Late Show.

For Meyers, who seems like a veteran in spite of hosting Late Night for just less than 18 months, this rejiggering is both an opportunity and a pressure cooker. Everything — including how he uses his legs while delivering one-liners — is an opportunity to attract either an audience or unexpected scrutiny.

As a result, you “kind of have to get your shit together a little bit faster,” Meyers says. “You can’t complain about, ‘Oh, we’re just figuring it out,’ when you’re surrounded by other shows that are figuring it out as well.”

So, I just read a bunch of stories analyzing how you tell jokes while sitting down versus standing up. Journalists have been poring over your monologues like it’s the Zapruder film. Did you anticipate this?

I did not. And it’s so funny because I think the reason that I didn’t do it from the beginning was because I thought people would think I was just doing something too close to my last job. So that was sort of why, in the very beginning, we went with a standing monologue. Which, for myself, was just to challenge myself and to push myself to try something different. It’s funny how, just going back to what I sort of have been doing for so long, that it draws so much attention.

I thought it was interesting that you decided to do this the week after Jon Stewart left The Daily Show, because you are obviously very politically minded, you’ve had a lot of presidential candidates on the show, and there is something about seeing you behind the desk that does have a certain gravitas to it. I’m wondering if, maybe subliminally, you’re trying to position yourself as late night’s top “political” guy.

To be honest, we actually thought about pushing this decision off for a week because we were worried people would think that’s why we were doing this. But the real reason is we really only have these two weeks of shows before we take a summer hiatus, and then we come back and it’s the fall and the new fall TV season starts. So it was really more of a coincidence than anything else.

I think one reason why this is getting so much attention is that late-night talk shows have such a fixed format. But given that late-night television is in the process of a major shift in terms of talent, do you think that format is also being phased out?

Well, I don’t know. You look at the people who are sort of doing it traditionally, it seems to be going perfectly fine. I don’t think they’re worried that there’s anything wrong with it. I mean, I think the bigger realization we had is most people who watch our show at 12:30 have watched [Fallon]’s show at 11:30, and he does a traditional monologue really well. And, for us, we realized it might be better to try to do something different, as opposed to trying to do something that the same audience has seen an hour earlier. One of the biggest things you look at is how to keep that same audience engaged, and hopefully this switch will be something that will move that direction.

I remember someone — I think it was Howard Stern — saying that it takes about 18 months to two years of doing a show every day to figure out what you’re doing. Your 18-month anniversary is coming up at the end of August. What have you learned along the way, and how are you applying that moving forward?

I think the biggest problem with the first six months for anybody who hosts a show like this is people watching at home can see the stress and the tension on a host’s face, and they’re probably wondering why, after a hard day at work, they have to watch somebody else do a hard day’s work. So I’m constantly trying to remind myself [of] that. My favorite part of the day is the hour we do the show. And that probably wasn’t true when we first started, but right now it really is.

You just are constantly wanting things to be better, and unfortunately, I think for anyone who works on a comedy show, you always hear the joke that didn’t work the loudest. So that’s a part that will stick with you after any show, but I will say you make a transition once you realize how many of these you do. It’s probably the difference between being a baseball fan or being a football fan, where there’s the difference of 162 games in a year versus 16. Players don’t take giant swings based on every given night — you just try to avoid long strings of sort of bad work.

It’s been a really interesting year in late-night television, with Letterman and Stewart leaving, and with Stephen Colbert and Trevor Noah starting new shows next month. A lot of the institutional fixtures have gone away, and it’s sort of like the Wild West now. Do you look at that as an opportunity? Does that not really enter your mind at all? How does that outside stuff influence what you’re doing?

I think ultimately you just have to focus on your own show and your own quality — the quality of your own show. But obviously it’s an exciting time. The funny thing for us is just how we had the new show for five minutes before the other shows had launched. In a weird way there probably is a little less patience from companies now because — certainly in the last year and a half — it seems like four or five other people have gotten started. And of course we have at least three or four coming up in the next year as well.

In the old days it seemed to be like you would only worry about people in your time slot, but is it different now because of how people sometimes watch these shows — like if they’re watching it on the Internet or something? Do you look at every show as competition?

I think you try, in a weird way, to look at no one as competition, if you want to actually be helpful to yourself and your own process. I think you have to make a show that, if you do it the way you want to do it every night, you’re going to believe that a certain audience is going to come and find it. At the end of the day, the network’s still probably most focused on the amount of people who actually tune in and watch it when it airs, but at the same time the reality is that when a show airs now, people have a lot of other ways to watch television than just what’s on the dial at that given hour. But, again, if I took a list of everybody that’s doing late-night talk shows and considered them competition, I probably wouldn’t be able to sleep at night. So more than anything else, I think you say it’s a good group of people to be making shows at the same time as.

We’re coming into an election year. I half-jokingly brought up my “political guy” conspiracy theory earlier, but do you see politics becoming a focal point for the show moving forward?

I think ultimately when you want to talk about politics, it’s very good news when there’s an election cycle. Not only is there more to talk about, but you get the sense that, as we get closer and closer to actual voting, more people will pay attention, and then the jokes sort of need a little bit less explanation. It was the same way at SNL during election season. So in general, not only would it derive more material, but hopefully it’ll continue to provide more guests for us.

You’ve already had presidential candidates like Ted Cruz and Carly Fiorina on the show this year. But I would imagine that politicians are even tougher than movie stars as far as getting them to open up and act like human beings.

I think the difference is movie stars don’t sit down with a team of people and talk about staying on message. And ultimately you can just tell when you’re talking to certain politicians — oftentimes not even ones that are running for anything — how important it is for them to stay on message. And if need be, they’ll just roll around and hit that message again in the same sentence.

Are there any other changes in the pike? Will the guests be standing up now? Will the band be sitting down?

We do feel like we owe the audience five minutes of standing from somebody. I don’t know where we’re going to get it, but we probably will spread it around throughout the guests and the band.

You’ll have to work in some extra standing time during the course of your day, just for exercise.

Absolutely. My doctor was the first person I called today.