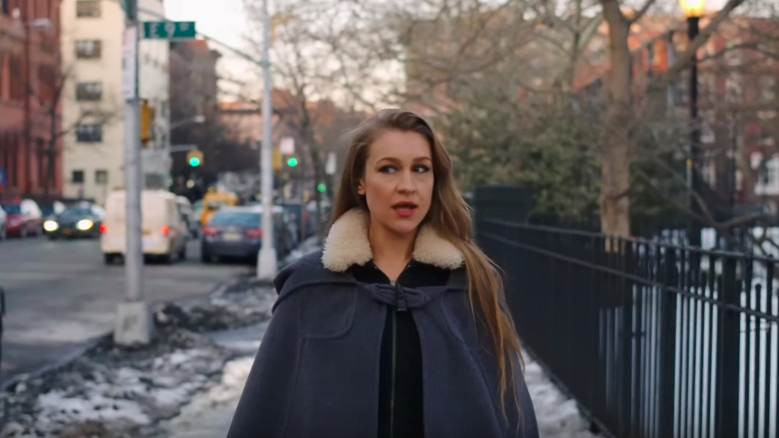 Female musicians with unique styles tend to spawn really divisive opinions. Hardly anyone is lukewarm about Lana Del Rey and Joanna Newsom. They seem to evoke strong feelings of YES or NO — love or hate — and their new songs will probably just amplify your existing sentiments. If you’re into Lana’s dark loungecore, fixation on failed relationships, and her chops with a memorable hook, you will dig “High by the Beach.” If you were hoping Joanna would cool it with the cryptic lyrics, punny wordplay, and long-form exploratory sound, too bad for you! But great for Newsomheads. If you find either singer too mannered for your taste, that’s fine, as long as you judge affected male singers like Bob Dylan the same way.

The Paul Thomas Anderson–directed video for “Sapokanikan,” Newsom’s new single from her next album, Divers, evokes the cover of The Freewheelin’ Bob Dylan,1 with a freewheeling Newsom careening through the streets while lipping to her complex song about all the bodies buried underneath the place that is now Greenwich Village. Joanna reels around the neighborhood, through a pizza place and past Cafe Wha?, the famous folk club that helped launch ’60s careers including Dylan’s. Newsom, with her long hair and ancient instrument, would have fit right in. The big surprise is seeing how Anderson, the West Coast master, lovingly films New York.

Newsom’s vocals soar and bend around the five-minute-plus song, which is relatively short for her. The lyrics name-check “Ozymandias,” Tammany Hall, and the titular Sapokanikan — the name of the marshland settlement originally inhabited by Native Americans where the Village now stands. One of the last parts of New York to be urbanized, it became the bohemian cultural capital of the city before reaching its current state as an expensive enclave that starving artists can no longer afford. In peals, Newsom refits the famous Shelley poem “Ozymandias” to New York, mocking its pretensions of permanence and drawing attention to the endless waves of departed human beings that have already passed through. It’s a song about death and dying, but a joyful one — the melody pushing outward toward the stars, looking for some untouched place where the passing of seconds will pause long enough to stop throwing dirt on an inevitable grave. In “Sapokanikan,” Newsom, a traveler from the always crumbling state of California, points out that every city is a half-sunk wreck built on a graveyard of unrecorded names.

While Newsom immortalizes the fleeting present by crystallizing the endless past, Del Rey looks to escape from the now through the here — an endless moment of distraction plied by artificial means. Newsom looks at Greenwich Village and sees all the people and former places that no longer exist. Del Rey uses the ocean to amplify the meaninglessness of her own experiences, life being one very temporary high. Newsom’s voice is a tender wire, volted by feeling. Del Rey’s is a muted current, softened with drugs and more maturely self-aware than most of her narrator characters have been in the past. No sugar baby or Lolita, the Lana of “High by the Beach” knows when a relationship has soured and has her own money with which to move on. Having long looked for the total abandonment of the self within love, she now finds herself burned out and, worst of all, bored. It’s a flip-side companion piece to “Honeymoon,” the title single from her new album that preceded “High by the Beach.”

In “Honeymoon,” Lana chases the ephemeral high of the early phase of a relationship, where partners are unrealistically idealized and lust is most intense. In “High by the Beach,” a relationship that once gave her that feeling has run its due course, and she numbs herself with an unnamed drug that serves as a portal leading away from both her boyfriend and the corporeal world. Over a creeping line of blooping synths, Lana eulogizes the relationship with contempt. With its alliterative chorus and stickily repetitive lyrics about a tropical flight from reality, it’s like “Kokomo” on quaaludes.

Both Newsom and Del Rey exist in their own self-created realms, with personal mythologies, uniquely intimate images repeated and embroidered from one song to the next, and unapologetically feminine presentation and sound. Newsom’s voice is criticized for being too strong, Del Rey’s for being too soft. Both are geniuses, to me. We’re all gonna die, so you might as well get high by the beach.

‘The Andy Greenwald Podcast’: Andy Daly on the Second Season of ‘Review’