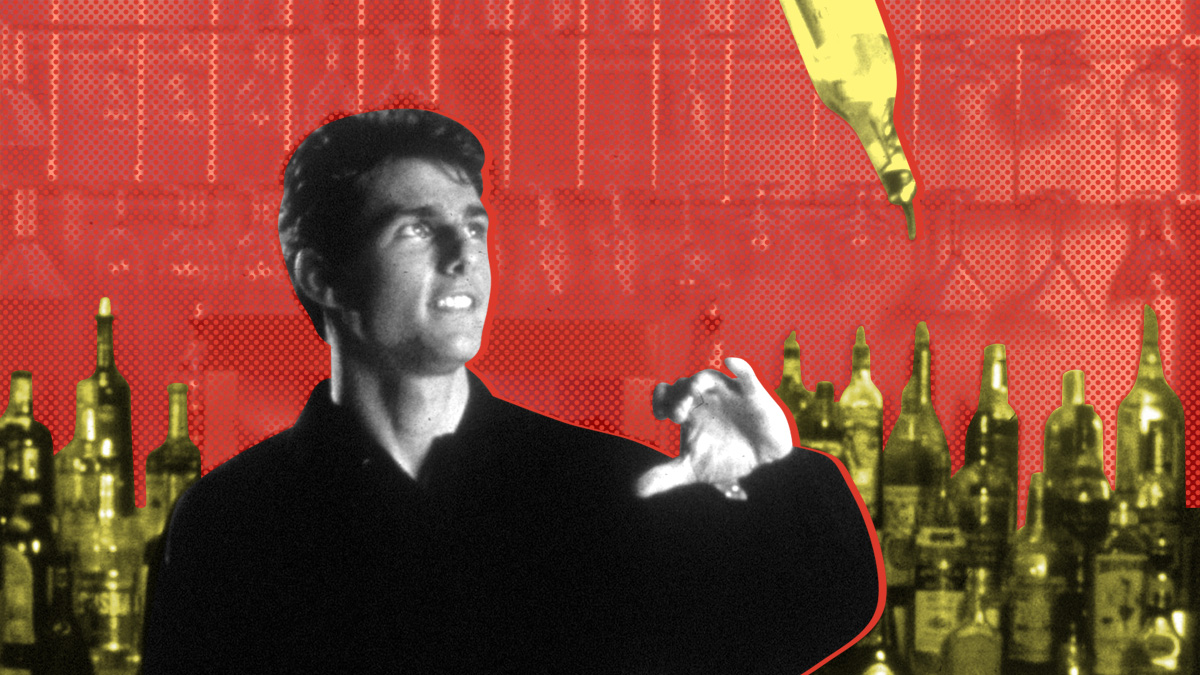 Although it takes place in the ’80s, in some ways Cocktail feels like it’s set in the ’50s. Specifically, the version of the ’50s popular in the ’80s, when Back to the Future also takes place. At the time, there seemed to be a general attempt to reset America to a pre-’60s world, and the film used nostalgic covers of old-time rock and roll to evoke a feeling of boundless enthusiasm. That aching for the past is what you remember about Cocktail, but beneath its aesthetic cheerfulness lives a more pessimistic view of existence.

In some ways the movie feels like a Reagan-era version of Saturday Night Fever, with flair bartending in place of disco dancing. Its “Started From the Bottom” plot arc springs eternal. In American Psycho (the book), Patrick Bateman encounters Tom Cruise on an elevator, and the movie he chooses to compliment Cruise on is Cocktail, which Bateman absentmindedly calls Bartender. Tom corrects Bateman’s glib mistake. In that interaction, the character of Bateman picks up on what Cocktail makes apparent: There’s a darkness at the edge of Cruise that contrasts with his all-American good looks.

While the film doesn’t have a ’70s downer ending, it has the rare ’80s denouement that involves compromise. Tom Cruise’s Brian Flanagan never fulfills his Wall Street–esque dreams. And when he finds out that his love interest, played by Elisabeth Shue, is wealthy, and her father tries to pay him off to go away, he turns down the money in favor of love. Flanagan ultimately gives up on his dream of being super-rich to accept a less glamorous but more rewarding life running his own bar, clumsily titled “Flanagan’s Cocktails & Dreams.” It’s fatalism as soundtracked by the Beach Boys.

I saw Cocktail for the first time the ideal way — late at night on a free trial of Cinemax. Like the rest of the ’80s, Cocktail feels like a weird, blurry dream. It is peak Tom Cruise; post–Top Gun triumph, dripping with sweat and hair gel. Cocktail’s Cruise has charisma to burn, but the movie makes it clear: His self-confidence is all a front. Flanagan, like Tom Cruise himself, seems to suffer from Impostor Syndrome. Flanagan knows that his triumphs are piddling and momentary, that the stakes might seem low in the broad scheme of things but determine his life. That brilliant Tom Cruise smile never quite just broadcasts victory. It always broadcasts the outward appearance of victory with a slightly visible undertone of “Oh, fuck!” Flanagan turns flair bartending into a life plan and finds a back door to the upper class by way of cruising wealthy women he meets bartending, but as he gets closer to the glamorous life, he finds it to be hollow and soul-bruising.

Tom Cruise was born Thomas Cruise Mapother IV in Syracuse, New York. Many of his films are parables for his own story of reinvention and white-male aspiration, but Cocktail feels the most like a Tom Cruise origin story. Similar to the real Cruise, Brian Flanagan uses charisma and sexual capital to get ahead. But in place of the treacherous world of Hollywood, Flanagan chooses flair bartending — the semi-lost art of flipping bottles that has been replaced as a marker of prestige by mixology. In terms of showmanship, though, if somebody is going to take 10 minutes to make you a drink, wouldn’t you rather it involve juggling than muddling?

Cocktail is the story of a blue-collar veteran from Queens who really wants to be a power-yuppie but can’t get a job anywhere because he doesn’t have the right connections. In some ways, Cocktail is very ’80s: obsessed with money and appearances, but it falls into the “Greed Is Bad” camp. It’s like an absurdly glossy version of a British kitchen sink movie — concerned with working-class heroes, involving a surprise pregnancy, starring an angry young man who is frustrated that he can’t penetrate the ruling class because he wasn’t born in the right part of New York. It’s simultaneously clean-cut and incredibly dark, just like Tom Cruise. And Elisabeth Shue is Cruise’s match here. The two of them are so cute together, their romance feels believable and down to earth, even with all the waterfall sex and horse riding on the beach.

Cocktail got terrible reviews1 at the time of its release, but made $171.5 million worldwide. In hindsight, it’s kind of a perfect movie, an East Coast counterpart to American Gigolo. Cruise is electric throughout. His “Last Barman Poet” slam poem is a wet run for the Frank T.J. Mackey “Respect the Cock, Tame the Cunt” monologue. There are also great supporting performances from fast-talking Australian Bryan Brown as Brian’s mentor, Kelly Lynch as a rich bitch, and queen Gina Gershon as a leather-jacket-wearing photographer who got lost on her way to After Hours and ended up in Cruise’s bar.

The movie’s signature song is the Beach Boys’ “Kokomo,” which people hate a lot, but I really enjoyed as a kid when I heard it for the first time on Full House.2 It is often cited as the nadir of the shitty Mike Love–led, Brian Wilson–less Beach Boys. But Mike Love wrote it with a Beach Boys–adjacent all-star roster of West Coast ’60s songwriters — John Phillips of the Mamas and the Papas; Scott McKenzie, who wrote “San Francisco (Be Sure to Wear Flowers in Your Hair)”; and Terry Melcher, the West Coast producer whose mother was Doris Day.

Melcher also ran afoul of Charles Manson for supposedly screwing him on a record deal. Melcher and his girlfriend Candice Bergen were the former occupants of the Cielo Drive home where the Family murdered Sharon Tate, Abigail Folger, Jay Sebring, Wojciech Frykowski, and Steven Parent. Manson targeted the Cielo house to, as Susan Atkins testified, “instill fear into Terry Melcher because Terry had given us his word on a few things and never came through with them.” And this haunted man went on to write “Kokomo”! Maybe that’s what gives it sort of an eerie feeling of poisoned wholesomeness.

“Kokomo” contains a secret message: The ’60s are long over, the ’70s were a bust, and now it’s the ’80s and we’ve still got to eat. Its extreme catchiness is undercut with sarcasm and pessimism. It’s about escaping to an idyllic land of enchantment that does not actually exist.3 Brian Flanagan wants to escape his lower-middle-class life, but he comes to find that, like Kokomo, it’s all a mirage.

Even though I love it, I’ve always felt “Kokomo” was a very cynical song.  Maybe it’s because it’s the sound of giving up on former artistic ideals and just trying to make some money on a novelty record. The hell with it, dude, we’re going to Kokomo. But it’s a great novelty record! Divorced from the legacy of the Pet Sounds Beach Boys, on its own ’80s postmodern terms, “Kokomo” rules. I also love Jimmy Buffett’s “Margaritaville.” I am not immune to the lure of a three-minute-long tropical vacation of the mind. OK, that positive part said, the bad: “Kokomo” and “Margaritaville” are the anthems of all-inclusive island resorts in the Caribbean with a mostly white clientele and many of the island’s locals working as staff in the tourism service industry.

The places evoked in those songs are imaginary, but all the islands listed in the opening chant of “Kokomo” are real islands. As sung by white dudes Buffett and the Beach Boys, “Kokomo” and “Margaritaville” always make me think first of colonialism, because of the complex and harsh colonial histories of the tropical countries in which white vacationers Buffett and the Beach Boys suggest you take a totally carefree vacation free of any cultural context. There’s a clip in the “Kokomo” video where you see white women splashing in the ocean and then a black woman walks across the frame carrying a tray of tropical drinks. Kokomo is not relaxing when you have to work there.

And in one of Cocktail‘s many insane twists of logic, the Jamaican resort has to import white bartenders from New York in order to bring flair bartending to Jamaica? Ugh, Kokomonialism. The video was shot at a Walt Disney World resort, the Grand Floridian, subbing for the imaginary Caribbean retreat. Cocktail’s Jamaica scenes were shot in Jamaica at the Sandals Royal Plantation resort, which seems to have “Plantation” in its name as a sign of luxury, not a reminder of the history of slavery in Jamaica. Like “Kokomo,” you might have to turn off your higher brain a little bit to enjoy Cocktail fully. It’s a tropical drink melting in your hand.

The longer you listen to “Kokomo” on repeat, the more sinister it starts to sound. And the more you watch Cocktail, the better it gets, at least in my experience. It’s endlessly rewatchable. Cocktail is the late night cable movie that has it all: horse riding on the beach, class issues, a graphically depicted violent suicide. All this and “Kokomo” too. Good luck getting it out of your head now.

A 'Mission: Impossible' Video Essay: The Auteurist Artistry of the Blockbuster Franchise