A Star Is Made: Tom Cruise, From ‘The Outsiders’ to the Insider 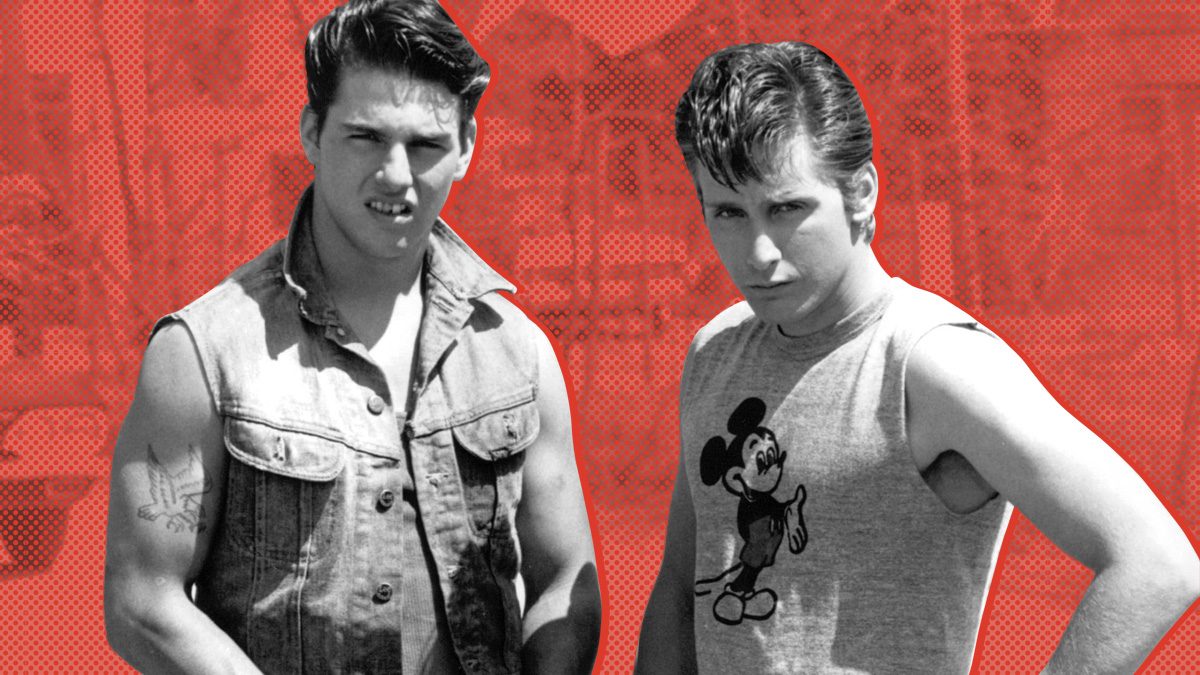 Stargazers remember the approximate moment that shapeless mass of energy born Thomas Mapother IV morphed into the star now known as Tom Cruise. That would be 10 minutes, more or less, into Risky Business (released August 5, 1983) when his character, Joel Goodsen, clad in shirt, socks and skivvies, slides across the hardwood floor lip-synching and dancing to Bob Seger’s “Old-Time Rock & Roll.”

Few Hollywood astronomers predicted Cruise’s ascension. This is because in his first two major films, he gave the most strident and least effective performances. In Harold Becker’s Taps (1981), an allegory set at a military academy, Tim Hutton was the idealistic cadet, Sean Penn the cynical one, and Cruise the murderous, gung-ho nutjob. Hutton and Penn give the impression of thought; Cruise, charged with his boundless energy, acted without thinking. His unmodulated performance, high-decibel and chest-thumping, belongs to a different film.

At the time anyone who saw this teenage-boy equivalent of a beauty pageant and/or star search would have bet against Cruise. Dillon, an inarticulate bundle of rage and lack of impulse control, looked to be the next Brando. Howell had the bruised sensitivity and intelligence to be his generation’s James Dean. And with his calf eyes, swollen lips and defensiveness, Macchio looked like the second coming of Sal Mineo.

Yet once again, when Cruise makes his unimpressive screen entrance it’s as though he’s come from another film. (Be advised: The Outsiders is Tom Cruise, B.C. — before capped teeth). The sequence takes place after Howell and Macchio have been suspected of murder and have rescued children from inside a burning schoolroom. Howell’s big brother (Swayze) throws an impromptu get-together for the suspects/heroes, and the general mood is more dark than light. Are they mourning death or celebrating life?

The snaggletoothed Cruise swills beer and crams chocolate cake into his maw. Projecting a cheerleader’s enthusiasm, he asks Howell, “Tell me, Pony Boy, what’s it like being a hero?” His voice is reedy and irony-free. He looks like a two-dimensional sketch in the middle of a sculptural tableau.

He would be entirely lost in this crowd but for the rumble between the Greasers and their antagonists, the Socials. Cruise sounds war whoops, lands punches, and, after he has felled his rivals, kicks them with surprising viciousness. While his confreres are resigned and melancholy about the conflict, Cruise’s character appears to take sadistic pleasure from it. He is not in the same movie as Dillon, Howell, and Macchio. He could be gung-ho. He could be sadistic. But Cruise could play only one emotional note at a time.

The Outsiders is set in 1965. Only in retrospect is it obvious that its borrowed 1950s archetypes — Nicholas Ray’s Rebel Without a Cause, teenagers killed in “chickie” races and gang fights — were out of tune with the 1980s where Rebels and Preppies dine together in The Breakfast Club.

Cruise, too, seemed dissonant — both with the 1960s time frame of The Outsiders as well as himself. He had a boy’s face, a teenager’s anger, and a man’s body. He didn’t yet know how to coordinate the three to imply internal conflict.

Between the completion of shooting The Outsiders late in 1982 and making Risky Business early in 1983 something clicked. Paul Brickman, the film’s writer/director, initially cast Cruise’s Taps co-star, Hutton, to play the ironically named Joel Goodsen. When Hutton pulled out, Brickman looked at Nic Cage, Tom Hanks, Brian Backer, and Kevin Anderson. The story goes that when first Cruise came to audition, Brickman recoiled in horror and said, “This guy’s a killer. Let him go do Amityville 3.”

Now, a lot of smart people will tell you that Cruise became a superstar because his “future enterpriser” in Risky Business made him the embodiment of the Reagan era. They’ll tell you that Cruise’s disingenuous smile distracted audiences from the fact he was playing genuinely amoral characters, not unlike the smiling and genial president of the free world. In fact, in 1986, I wrote, “[Cruise] embodies a boyish buoyancy, a nervy conviction that you can always get what you want. Where achieving a goal is concerned, a Cruise character knows no bounds. More than any other trait he embodies, this makes Cruise the Reagan era’s male ingenue of choice.”

Today I no longer believe that the crystallization of the Cruise persona happened on the set of Risky Business.

It’s likely it happened on the sets of Taps and The Outsiders. I think he got an intimate look at the best actors in his peer group and sized them up. I think he studied how Hutton and Penn played the subtext and not the text of the screenplay. I think he saw how Dillon’s inarticulate rage resonated with the audience, how much Howell and Macchio used silence and stillness to communicate volumes. I think he appreciated how these actors could play contradictory emotions — in other words, more than two notes or more at the same time.

In 1986, Cruise’s annus mirabilis (with Top Gun and The Color of Money simultaneous hits), I interviewed Roos for an essay on Cruise. The producer and casting director admitted he thought that of all The Outsiders cast, Howell would be the one with the staying power, but that “Cruise has handled his career more shrewdly than any of his peers.” Roos reflected, “In his choice of parts, he manages to make unsympathetic characters likable.” Roos later emphasized, “he’s resisted being associated with the Brat Pack. Cruise flies solo.”

Mostly true. But sometimes he was wingman to older actors whom he could also learn from, like Paul Newman in The Color of Money and Dustin Hoffman in Rain Man. Back in 1986, Newman, veteran bad boy, predicted of Cruise that, “he might be the only actor of his generation to survive his youth.”

Takes one to spot one, no?

Carrie Rickey (@CarrieRickey), longtime movie critic for The Philadelphia Inquirer, reviews movies for Truthdig and contributes to Yahoo Movies. Read her at carrierickey.com.